As has been widely reported, Phoenix and its surrounding cities and towns are waaaay spread out across the Arizona dessert. So when visiting the area, it’s important to choose accommodations based at least in part on location. The W Scottsdale, besides being an excellent iteration of the venerable boutique-style brand, happens to be very well placed, close to a rich variety of restaurants — in walking distance, even — that would please anyone from the post-grad bro to the serious gastronomic connoisseur.

Fresh off a post-flight run to a highly rated taco spot in North Mountain, Most Wanted Tacos Shop, I drove the requisite 20 minutes — because everything around here is a 20-minute drive — and pulled into a valet area with slanted copper columns supporting a spaceship-like roof with skylights that peer directly into the hotel’s pool. It’s a dramatic entrance. Inside, the lobby, or “Living Room,” in W-speak, has a slightly more Southwestern feel, with cowhide chairs amid the typically muted, if not dark, tones of the common space and lengthy bar. Off the lobby is an entrance to the W’s hotel restaurant, the L.A. import Sushi Roku. Pretty quickly, you get the feeling you’re set up in a cool corner of Scottsdale. Sure, you could have stayed at the Art Deco gem or the aging resort nestled against the desert mountains, but why sacrifice sophistication just because you’re in Arizona?

That said, as with many W’s, there’s an emphasis on the scene, and the Philippe Starck–esque rooftop pool and bar areas thump and buzz from Thursday through the weekend, so plan to ask for rooms away from the action if you’d prefer not to hear the strains of an Ariana Grande remix while you’re trying to catch some z’s.

The Rooms: Being a New Yorker, I look forward to traveling in part because I know I’ll be acquiring more space the second I depart the five boroughs. So imagine my disappointment when entering the “Spectacular King” at the W Scottsdale. The room might be considered average-sized in Manhattan, but for Scottsdale, it felt almost claustrophobic, with the bed taking up most of the space and the bathroom (standing shower only, no tub) mere steps away. I didn’t mind the layout as a solo traveler, but if my wife had been with me, it would have verged on uncomfortable. The W does offer suites, but even those only range up to about 600 square feet, though the brand’s Extreme Wow suite offering here expands to more than 2,100 feet. Aside from the space issue, the rooms do have a modern elegance to them, and despite the hotel’s age, my “Spectacular King” felt surprisingly up to date. Most rooms offer at least a partial desert view, if not a peek at the famed Camelback Mountain. 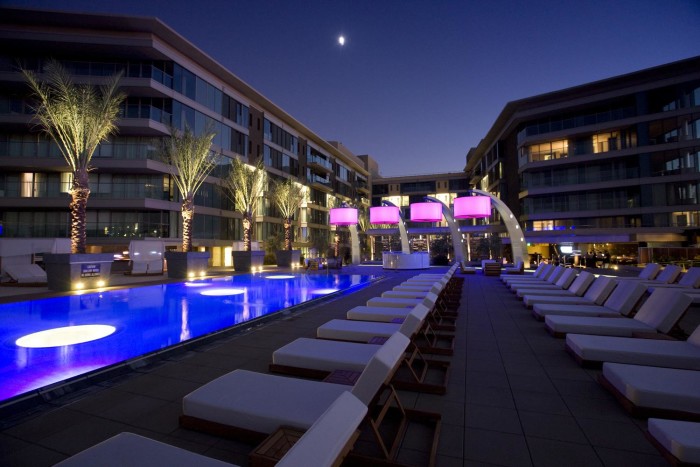 The Look: It’s a W, so the lighting is dim, the decor is sleek and there’s a pervasive soundtrack of inoffensive beats. The hotel’s most notable space is the sizable pool area, which features cabanas, lounge chairs aplenty and almost menacing oversized lampshades that provide light when the desert sun sets. The Living Room and bar area (“Shade”) are chic without being extravagant; while there’s a reputation for being very scene-y, I found it fairly tame during a Monday-Thursday stay. Sushi Roku’s design segues seamlessly from the lobby, though the backlit bar and a spiral staircase add allure. A gift shop off the Living Room seems incongruous, but otherwise the common areas, rooms and hallways all fall in line with the W brand. The fitness center is worth noting as well; it’s small but well equipped and features sliding doors for those days when the thermometer isn’t too far into the red.

The Neighborhood: Given how much time people spend in their cars in the Phoenix-Scottsdale area, it’s remarkable how much is within walking distance of the W. The most immediate neighbors of the property are sports bars, taco shops and pizza joints that make up an entertainment district that’s probably best avoided most nights, unless you are partying with your bros, seeing a concert at LiveWire or catching up with your sorority sisters a few years after graduation (though I did appreciate the friendly service at Majerle’s during the National League Championship Series, where I watched my Mets smack down the Cubs). Beyond this, there is ample shopping at the Scottsdale Fashion Square, hiking and outdoor activities nearby (I ran along the flat dirt trails on either side of the extensive canal system), and even a very man cave meets punk rock barbershop, Cut Throat, where I got a damn good shave.

But it’s the food that really impressed me. Practically across the street from the W is Breakfast Club, an upscale diner with a mouthwatering menu that includes creative egg sandwiches and Southwestern spins on the classics. I highly recommend the fish tacos at the Mission, a modern Latin restaurant in Scottsdale’s slightly kitschy old-town area. Some of Sam Fox’s ubiquitous restaurants and watering holes are nearby, with Culinary Dropout a short walk and the Henry a short drive. I had my most memorable food and wine pairing during my stay at the acclaimed FnB, where chef Charleen Badman puts local ingredients through a Mediterranean prism to outstanding effect, while her partner, Pavle Milic, works tirelessly to promote Arizona’s fledgling wine region (though he does offer a non-Arizona list by request, with a virtuoso take on Old World bottles). These are but a few selections that can get you back to the W without seeing the inside of a car, but there are also many other culinary options around — though if you want the best tacos, you will need to drive 20 minutes or more. That’s just the way it goes in the Valley of the Sun.