At first, seeing the whole, human-sized beast stripped clean of its fur, head, hooves and identity felt a little daunting. But as Peter Varkonyi, chef de cuisine at Beast + Bottle, laid the 90-pound lamb on the table, a new story began to unfold. In this nose-to-tail tale, a Denver restaurant uses every bit of the delicious creature to create unique dishes. And it’s not an isolated occasion — they do it every week.

“The whole-lamb method is the most beneficial to both the rancher and chef, both from a cost and responsibility standpoint,” says Paul C. Reilly, chef and co-owner of the restaurant. Plus, he adds, it gives you more versatility when coming up with dishes. “Every animal is basically a blank palette, and your knife work determines where your menu can go.”

With that in mind, Varkonyi and Reilly took us through the process, from receiving the whole animal from the local Ewe Bet Farm to breaking it down to the tantalizing treats that come out of the process. Some of the meat gets cured into salumi, other parts boil down to create a rich ragu, while the choice cuts are featured as main courses. The result is an ever-changing menu that looks not just at the chops and ribs but at the offal, cheeks and bones. 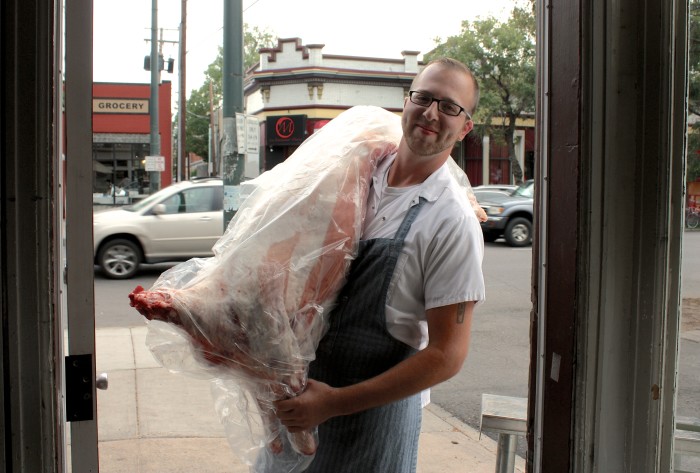 Varkonyi brings the lamb into the Uptown kitchen from the walk-in fridge out back. “The taste of the lamb reflects their diet, like how a lot of people talk about terroir with wine,” says Varkonyi. “I think with lamb it speaks even louder. It is the most flavorful protein out there.” 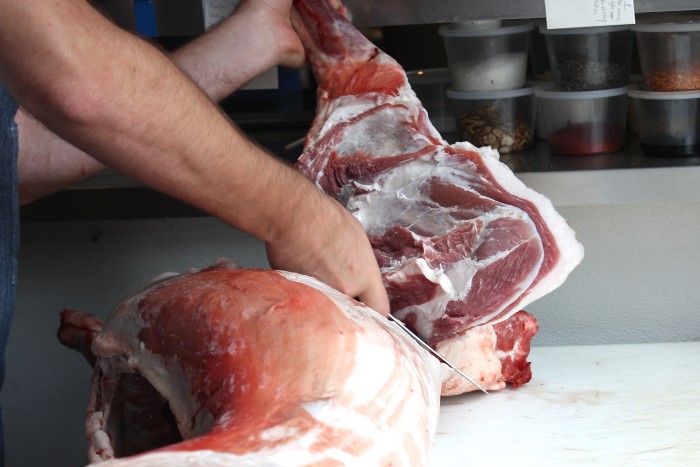 The first cut separates the legs. Later, the meat from the shanks will be used for many things, including brunch favorite corned lamb shank hash. Other treats: a terrine, and a pickled shank with turnips, potatoes, horseradish and crème fraîche. 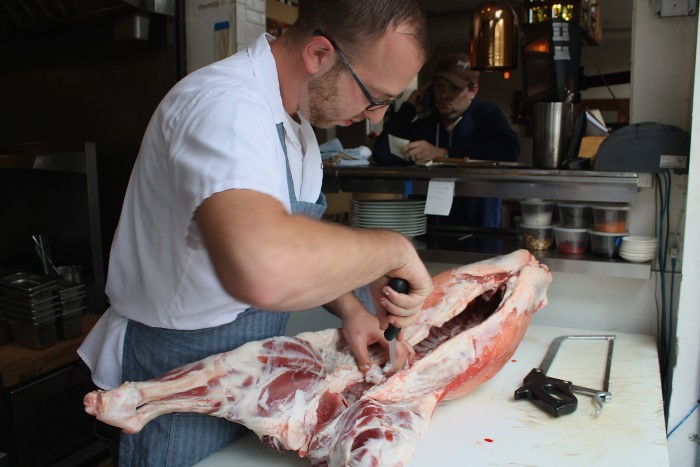 Next, Varkonyi saws through the breast bone, which opens it up and makes it easier to get to the other sections of meat. 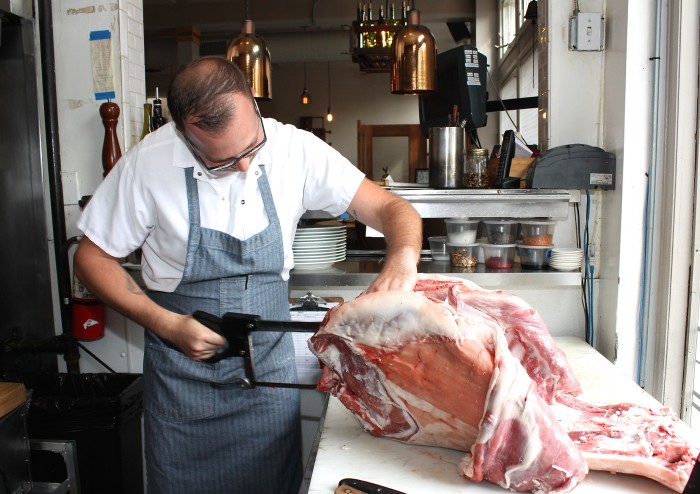 From there, Varkonyi saws through the spine in order to slice the lamb in two halves, which makes it easier to portion off succulent ribs and chops. “We like to make things our guests hunger for, but that we can be creative with,” says Varkonyi, who helps make four to six dishes using the animal each week. “Actually, the lamb goes quite quickly.” 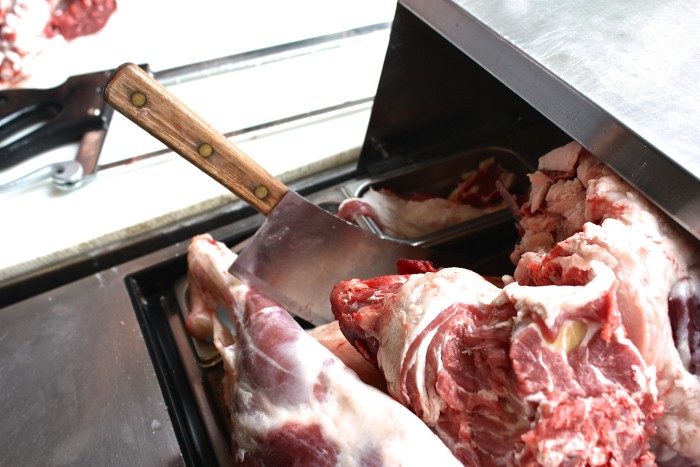 A lot of work goes into this step, and Varkonyi uses a meat cleaver, mallet and bone saw to break through. 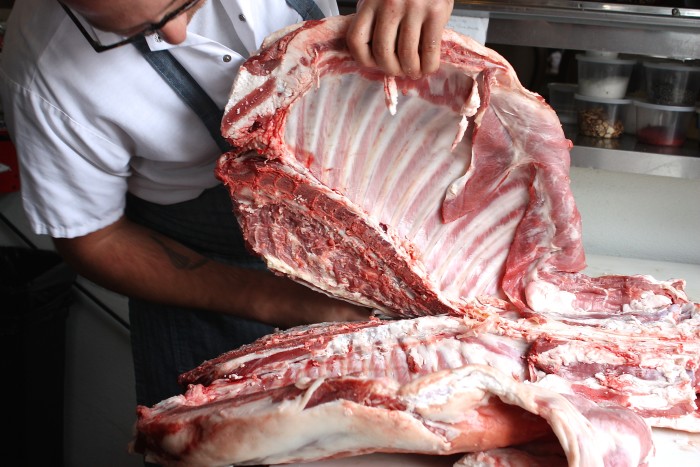 Now that the ribs are exposed, he cuts lamb racks. “We find the best marbling in the rack cuts,” says Varkonyi. Next, he cuts the T-bone, which the chef says is his favorite piece thanks to its flavor and tenderness. “The cut looks very petite and clean, like a pint-sized porterhouse.” 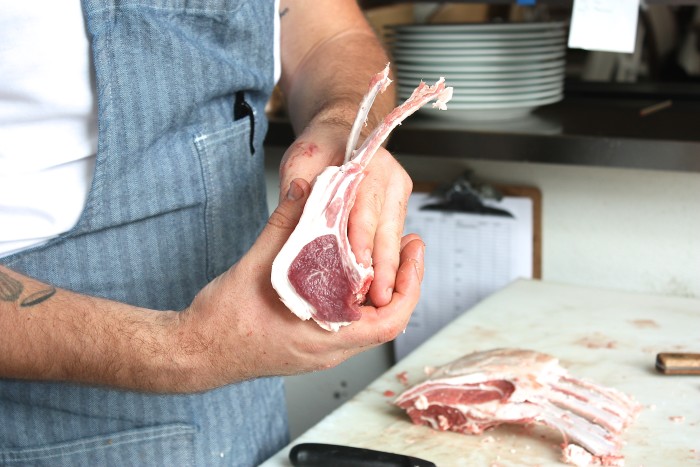 Using a paring knife, Varkonyi cleans the fat from the bone to “French” the rack of lamb, which makes for a beautiful presentation. 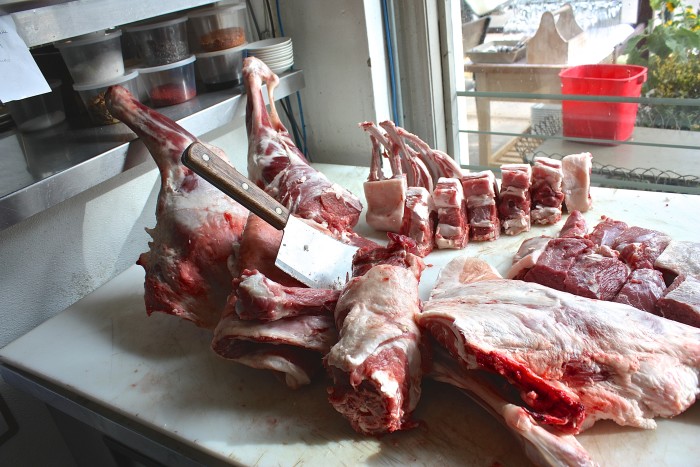 All the work takes about 90 minutes and produces 17 to 21 sections of lamb that are ready to work with. 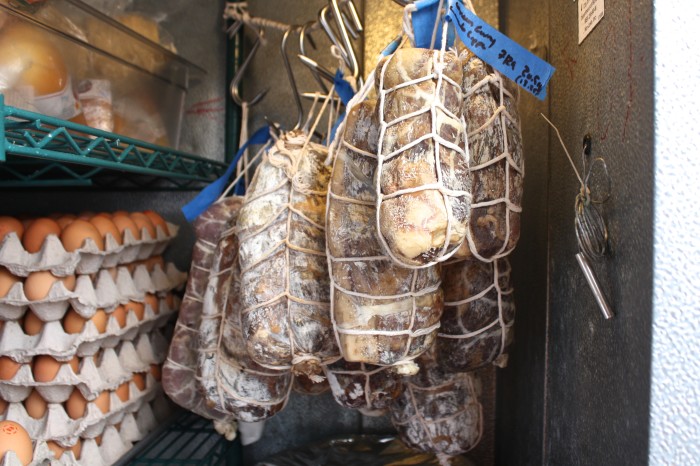 One of the first things that’s made (and one of the last thing to be ready) is the house-crafted coppa and other salumi. 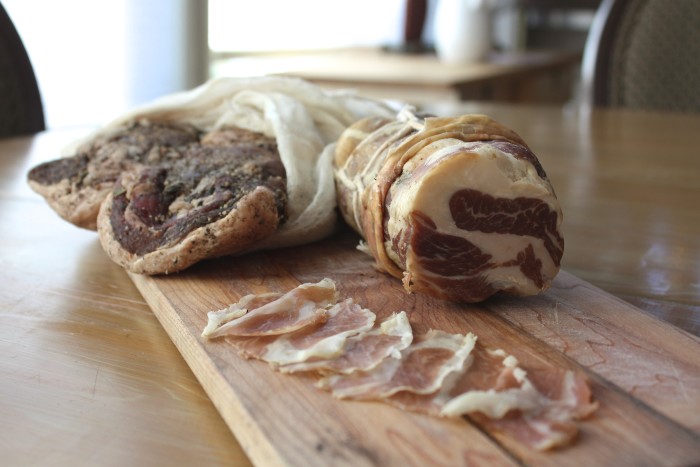 Once sliced, the coppa is ready to go — a lovely dish of melt-in-your-mouth, funky lamb that’s delicious on its own or served atop the restaurant’s breakfast pizza. 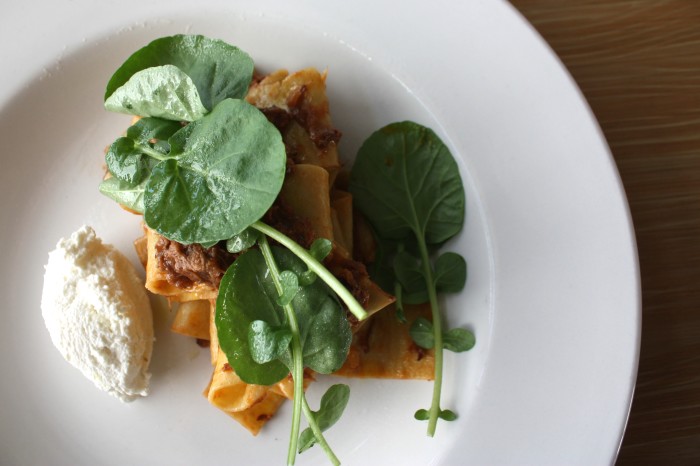 Lamb ragu is one of the featured dishes right now. It’s made with trim from various parts of the animal, shoulder meat, salt, chili flakes, anchovies and rosemary and is braised for more than four hours. The hearty sauce is tossed with house-made pappardelle and topped with fresh ricotta and Meyer lemon oil. 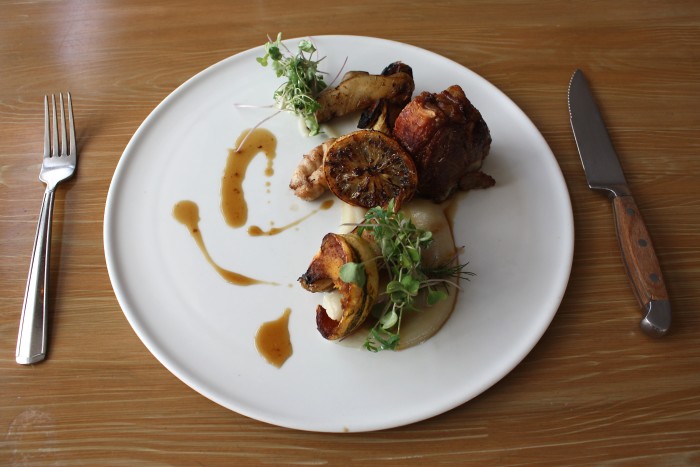 One of the feature dishes is the pan-roasted lamb T-bone. The steak is cooked sous vide for three hours before finishing off in a hot oven. At Beast + Bottle, it is served with lamb sweetbreads. “We like to feature the animal in as many variations as possible,” says Varkonyi. “It gives the customers a one-dish tasting menu.” 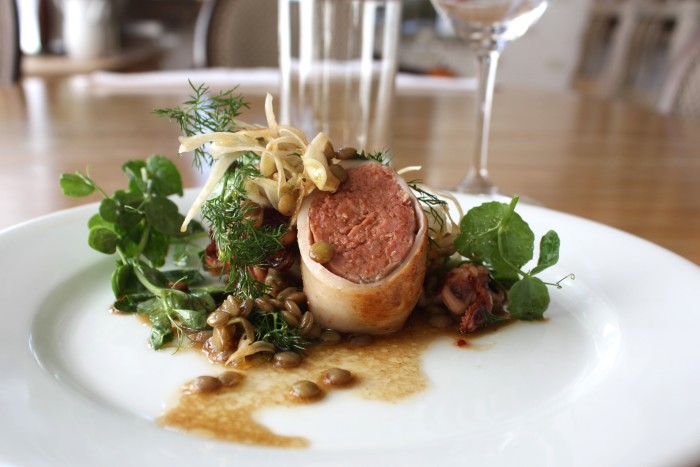 Take another look at this dish. While it looks like a simple lamb merguez on top of the lentils, the casing used to hold the flavorful sausage is squid. With that, the lamb has been used in many ways this week — six to be exact. Next week, some menu items may stay the same, but chances are guests will be delighted with new dishes.