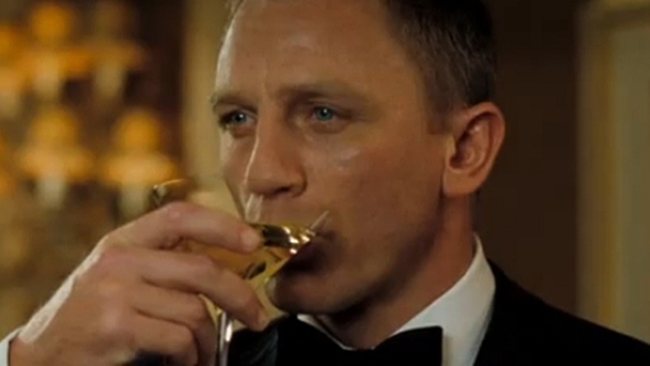 On Friday, Sony Pictures releases its latest James Bond film, Spectre, the 24th installment in the long-running spy movie series. Which makes this as good a time as any to celebrate the iconic character who knew exactly what he wanted out of a martini. As Bond puts it in Ian Fleming’s original 1953 novel Casino Royale, he’ll take it “very strong, very cold and very well-made.” He also was methodical about his vermouth, ordering a half measure of Kina Lillet to stand up to the four measures of booze found in his champagne coupe. Until, that is, a scene in the book Diamonds Are Forever in which colleague Felix Leiter introduces Bond to Cresta Blanca, evoking a most memorable line: “Best vermouth I ever tasted.” We get it, Bond — when we find a product we like, we stick to it, making it hard to break the return-to rhythm you may have developed over many years and countless martinis. But if the man of many fine habits himself can do it, we think you can, too. In honor of all things 007, here are the top seven to try now:

Sutton Cellars “Brown Label” Dry Vermouth
This vermouth launched in November 2009, making it the first new domestic vermouth in a decade. It’s also the offering that this San Francisco winery is best known for, among other vermouths and bottlings. Orange peel, chamomile, rosemary and 14 other ingredients go into the unaged white wine, which has notes ranging from fruity and floral to herbal and medicinal and is fortified with unaged brandy to result in 17 percent alcohol by volume. suttoncellars.com

Ransom Dry Vermouth
It was important for the team at this Sheridan, Oregon, farm to capture the terroir of their environs, so when the crew discovered “sweet, herbal aromas of a Willamette Valley meadow in late summer,” they couldn’t have been happier. And who could blame them? Their hard work — from texture-building techniques like fermentation on the skins to controlled oxidation in the barrel — really paid off. ransomspirits.com

Uncouth Vermouth
Bianca Miraglia has been creating seasonal vermouths out of Red Hook, Brooklyn, since 2012. Every ingredient, which she forages for personally or obtains from farms in the Hudson Valley, is sustainably sourced within the state lines of New York, including those that went into her first trio of offerings: apple mint, pear ginger and serrano chili lavender. While a handful of plants are used in each expression, check out the bottle names to get a clue as to the most prominent flavor. uncouthvermouth.com

Atsby Amberthorn Vermouth
The team at this North Fork, Long Island, winery forgoes the traditional use of more neutral varietals for its base wine, such as Folle Blanche, Ugni Blanc and Colombard, in favor of Chardonnay to achieve a fuller-bodied product. That medium-weight offering packs a long finish and intense aromas of spice and vegetable, thanks to more than 20 botanicals, including chamomile, anise, lavender and rose petals. atsbyvermouth.com

Cinzano Extra Dry
Brothers Giovanni Giacomo and Carlo Stefano began creating this small-batch, handcrafted vermouth in 1757 in the Piedmont region of Italy. While the recipe remains a closely guarded secret that follows the traditional 250-year-old Cinzano method, partakers might be able to take a guess based on smooth notes of spice, light citrus and vanilla. palmbay.com/cinzano-vermouth

Vya Extra Dry Vermouth
More than 17 herbs make up this extra-dry offering straight out of Madera, California, which first hit the market in 1999. Unlike the brand’s sweet vermouth, which calls for the roots and seeds of various plants, the extra-dry receives the flowers and leaves from such findings, including lavender and rose petals grown on site, red clover, blessed thistle and gentian. vya.com

Dolin Dry
While the precise recipes of this French vermouth producer are kept secret, it’s understood that up to 54 different plants and spices from Chambery Alpine meadows are used, including wormwood, hyssop, chamomile, genepi, chincona bark and rose petals. Strong notes of orange peel and honey give way to softer, herbaceous aromas, which match up well against a full body and long finish. alpenz.com