The holiday season is upon us, but just because the weather feels cooler and the days are shorter doesn’t mean you can’t warm your bellies with fresh produce. Just ask chef Brian Millman of Atwood in Chicago. We did and found out he is cooking with all sorts of end-of-fall goodies. “I really like the heartiness of fall flavors, and I tend to save them for that season,” he says, adding that sage and rosemary are the biggest fall herbs he uses. “It’s the exact opposite of summer’s fresh style of cooking. In the fall and winter you get to develop deeper flavors by slow-cooking stuff.” Take a cue from this Midwestern chef and pick up bright orange pumpkins, sweet Jerusalem artichokes and small yet substantial Russian banana potatoes.

Unlike the behemoths you carve into monstrous faces, sugar pumpkins are small, round and perfect for cooking with. Especially when you make pumpkin gnocchi (recipe below), a specialty Millman brings to the restaurant each fall. “I know gnocchi can be kind of common, but I think we do a unique spin on it since the gnocchi is all pumpkin,” he says. Add some bright rosemary-laced goat cheese cream, fried kale and toasted walnuts and voilà! A sensational fall dish highlighting one of the season’s best finds. “It hits the fall flavors, plus you get a nice tanginess from the cheese.” If making this dish feels a little daunting, rest assured, there are tons of things you can do with sugar pumpkins. For example: pumpkin pie, another fall classic. Roast the squash yourself and then puree it for baking, or use it to create a rich seasonal soup. Take chunks of roasted pumpkin and toss it with pasta, or bake into a satisfying casserole. Serve on salads, as a side dish or even as the feature of the plate. The options are endless, unlike the season, which will peter out come December.

Native to North America, the Jerusalem artichoke is also known by its other common name, sunchoke. These hearty tubers are great this time of year and add a surprising texture and burst of sweet green artichoke flavor to just about anything you pair them with. Unless you are going for a dish that’s pure white, don’t bother peeling the flaky brown skin. It’s so thin that you can easily eat it, and if you roast the veggies, the outside layer adds a pleasing pop when you bite in. Another way to prepare them is to puree them and make a sort of cream, the perfect accompaniment to fish, says Millman. “I get excited about sunchokes every fall,” the chef says. “It gives you this unique, starchy but not too starchy artichoke flavor that I like with striped bass.” You can also slice them thin and toss with spiced pecans, apple and kale to make a hearty salad, mash like a potato or keep it simple with the aforementioned roasting. You should pick out samples that aren’t too big — say, smaller than a teen girl’s fist — and ones that have the skin intact. The texture should be firm, and the color a light brown with little to no greening.

You might look at this long tuber and think, “That’s a fingerling potato.” Well, you wouldn’t be wrong, but you would be overlooking the special qualities that are found in this particular Solanum tuberosum. It’s full-bodied with a golden, nutty taste, as if you had already cooked it in a pound of butter. “They are almost silky smooth when you eat them,” says Millman. “We slow cook them in oil, garlic, herbs and lemons.” On reason the chef likes to work with these beauties is the size, which he says lends itself well to infusing a lot of flavor. Of course, you can simply roast them plain, turn them into a mash or toss them with other fall favorites to make a vegetarian-friendly meal. No matter what you do, just make sure to give this variety of potato a try — you won’t be disappointed. 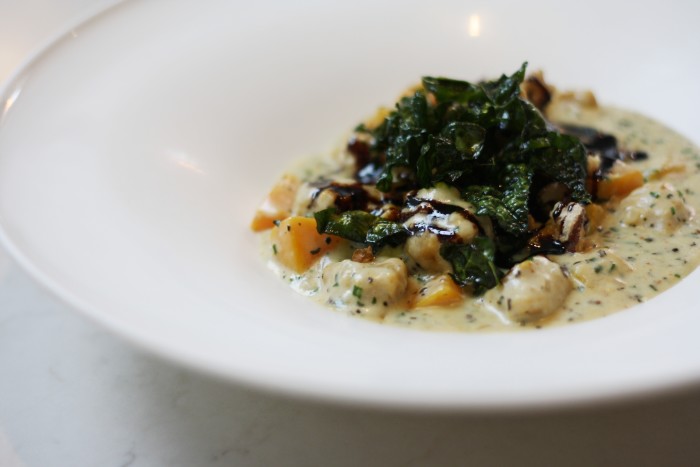 Courtesy of Brian Millman of Atwood Restaurant in Chicago

To roast pumpkin: Cut pumpkin(s) in half and remove seeds. Roast in the oven at 350 degrees Fahrenheit with the skin side up. Cook until pumpkin is soft, about 20 minutes. Transfer to food processor and puree until smooth.