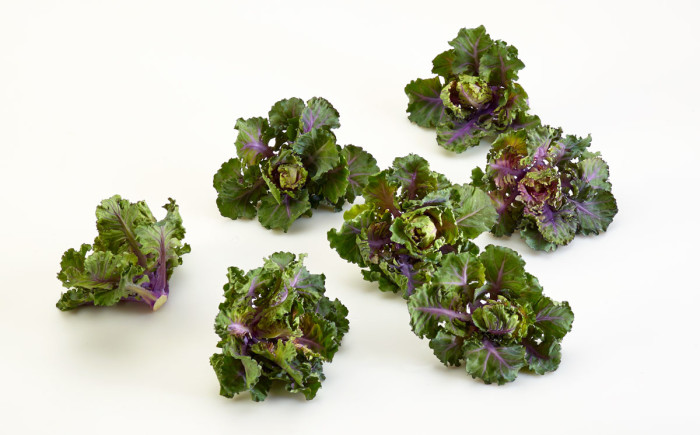 Kale sprouts, Lollipop Kale, flower sprouts and Kalettes are four names for these dark green, veiny-petaled, Brussels-sprout-like vegetables. Maybe you’ve seen these bad boys hanging around your grocery store or popping up on your local’s seasonal menu. But what are they, exactly? They’re not like smooth-domed Brussels, nor are they flat and leafy like kale. Did a food scientist or crazy farmer manage to breed the two greens together? Yes, actually.

Where it’s from: A member of the species Brassica oleracea — think collards, cauliflower and kohlrabi — kale sprouts are technically a cross between Russian red kale and conventional Brussels sprouts. Though they look the part, these hybrids aren’t actually a traditional sprouted flora. Rather, they come from a plant that’s harvested early during the shooting stage. This process takes a lot of time, which is probably why you don’t see them too often in grocery stores. Oddly enough, you may find them in Trader Joe’s — if you do, grab a bag and get cooking.

But how did this hybrid vegetable come about? There are two main leads. One path credits Salad Savoy founder John Moore in Salinas, California. This company marketed kale sprouts, which do in fact taste like Brussels sprouts and a kale stalk had a baby, under the trademark name Lollipop Kale in 2012. On the other side of the Atlantic, Tozer Seeds started marketing the same product, dubbed Kalettes. Like Lollipop Kale, these seeds were developed by crossing Brussels with British kale. The man behind the original mash-up was Dr. Jamie Claxton, in Britain, who created the first hybrid in 1995. Scientists at Tozer developed it further, and in 2010, the company began marketing Kalettes around the world, although because of the USA’s obsession with the leafy green, the States are the biggest market for this hybrid.

When it’s in season: Like kale, you can find these sprouts pretty much year round, though in a traditional garden they are best in the fall and early winter. They’re harvested when the first leaves of the plant have blossomed around a tiny, tight central head. Their growth time is about five to six weeks.

What to look for: As far as the shape and size goes, you want the sprouts to resemble a loose, lacy Brussels sprout small enough to eat in one bite. The color should be deep green, with distinct purple veins and no yellowing leaves.

How to store it: Keep kale sprouts as you would Brussels: in the fridge, covered with a damp paper towel. You can save them for about two to four weeks. They are pretty forgiving, so if you end up forgetting, you can always peel back dried-out leaves and use the insides.

How to prepare it: Chris Painter of il Pittore in Philadelphia first saw kale sprouts on a product sheet while stocking the kitchen and decided to order a bunch. After the first taste, he was hooked. “I love the earthy sweetness that comes with them, and the texture is different in that they are firm and leafy at the same time,” he says. Right now Painter serves the vegetable as an antipasto with a rich sweet-pepper sauce, fennel and a poached egg, but he plans to also give them a julienne or diagonal cut and pair them with a springy pasta dish. Over in Boston, chef Jason Bond of Bondir treats them like Brussels sprouts by roasting the greens in duck fat or olive oil, then seasoning with a bit of salt. “The taste profile is similar to kale, but these are just fun to work with,” says Bond, who serves kale sprouts with his beef bavette. Plus, he adds, these little leafy balls have a cute factor. On that note, if you want to keep them looking precious, try spearing them on a skewer for the grill. However you cook them, in the end you’ll have a simple side dish that has more mystery than the average green and is sure to raise a few eyebrows.