Dang, but Dad is tough to buy presents for. After a long, full life, he’s probably already got everything he wants or needs, and if he doesn’t, Amazon is just a click away. But with his big day coming up, it’s incumbent on you to figure out something to pay him back for all those times he sat in the car waiting for you to finish 5 a.m. hockey practice. Without an iPhone to keep him occupied, no less.

So how about a nice combo gift? Perhaps a good book and some related booze to sip on as he reads? Here are a few suggestions to make the old man happy:

1. The Art of American Whiskey: A Visual History of the Nation’s Most Storied Spirit, Through 100 Iconic Labels by Noah Rothbaum and a bottle of Four Roses Single Barrel Bourbon

Rothbaum is the former editor-in-chief of liquor.com, so you can be sure that the NYC-based spirits writer knows his stuff. This lavishly illustrated history of whiskey traces the spirit from early colonial times through the current bourbon boom. Photos of iconic bottle labels and recipes from modern mixologists complete the package.

Since there will not be a release of the annual Four Roses Limited Edition Single Barrel this year (damned bourbon shortage!), it’s up to you to find which of distiller Jim Rutledge’s ten separate mash bill/yeast strain recipes is worthy of gifting to Pop. The good news is there’s a four-letter code on every bottle. Hint: Rutledge recently revealed that the 2010 OBSV release was his favorite batch ever, so that’s a good starting point. 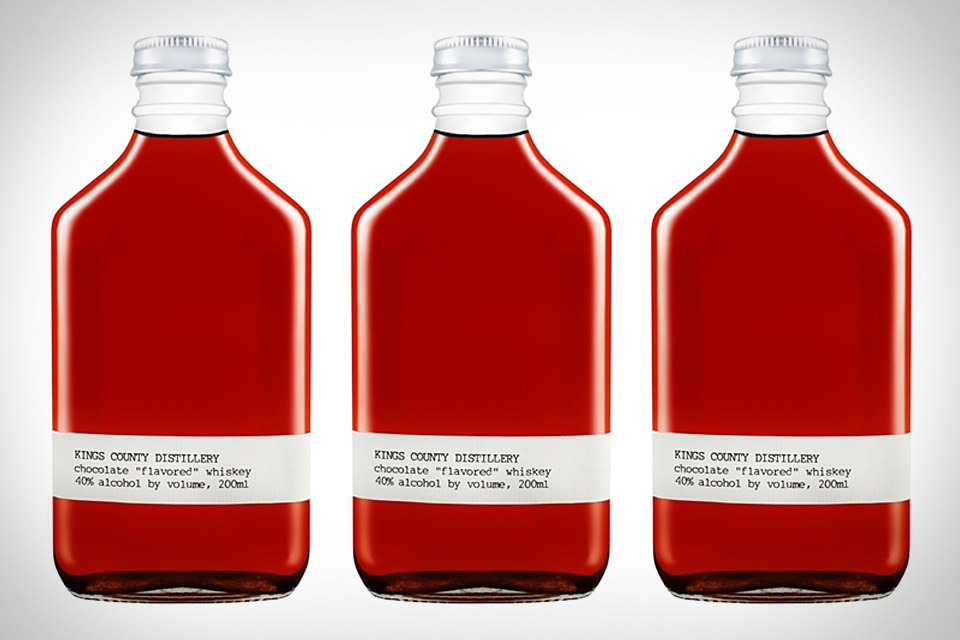 King County’s Chocolate Whiskey is made by infusing moonshine with ground cacao-bean husks.

2. Whiskey Women: The Untold Story of How Women Saved Bourbon, Scotch, and Irish Whiskey by Fred Minnick and a bottle of King County’s Chocolate Whiskey

Just in case your mother gives dad grief for lounging in his easy chair while reading and sipping on a tumbler of brown liquor, give him this book as a cover story. Actually, it’s more than just a way to maintain familial harmony since Louisville author Fred Minnick has put together a fascinating story of how the fairer sex has been instrumental in the rise of the spirits industry all the way back to when they were the first brewers in ancient Mesopotamia.

Pioneering female distiller Nicole Austin of Brooklyn’s King County Distillery continues the line of ladies who still work the still. Her Chocolate Whiskey is made by infusing King County’s moonshine with ground cacao-bean husks from their neighbors at Mast Brothers Chocolate. Paired with a nice cigar, it’s a great after-dinner treat.

3. Sweet Sicily: Sugar and Spice, and All Things Nice by Alessandra Dammone and some Amaro Averna

Paired with two fingers of bitter and herbaceous Averna Amaro over ice, a reading session of Sweet Sicily should transport Dad to the old country and definitely activate his Pavlovian response.

4. Staten Italy: Nothin’ but the Best Italian-American Classics, From Our Block to Yours by Francis Garcia and Sal Basille and Cascina Fornace Roero wine

Garcia and Basille are fifth-generation restaurateurs with six locations of their Artichoke Basille’s restaurant. Their book is full of simple, unassuming Italian-American recipes and family stories. Expect lots of red sauce and pasta — wear a bib when you read it.

Cascina Fornace Roero is from a mountainside winery in Italy’s Piemonte region that fits right in with the Staten Island boys. The vintner comes from a family that has made wines for their own consumption for generations, but now he has switched to commercial production using organic techniques to create some affordable wines from old vines that are great representatives of the region.

5. The Official John Wayne Way to Grill: Great Stories & Manly Meals Shared By Duke’s Family by the Editors of John Wayne Magazine and a bottle of Duke Kentucky Straight Bourbon

Y’know that if there’s a John Wayne movie playing somewhere on your 200+ cable channels and your dad finds out about it, it’s time to relinquish the remote control. John Wayne Enterprises (there is such a thing) has compiled a list of recipes for John Wayne’s favorite meals, from Tex-Mex classics to the best of Western barbecue and everything in between. The Duke’s son John Ethan Wayne also peppers the pages with anecdotes from his life growing up with a living legend.

In his spare time, Wayne fils has also gotten into the whiskey biz, developing a Kentucky Straight Bourbon blended from distillate provided by a couple of his father’s favorite producers. Apparently blending whiskey was one of the Duke’s favorite hobbies in the days before mega-distilleries began to marry their own batches to one another. Working from notes found in one of his father’s storage lockers, Ethan Wayne has created a man’s-man’s bourbon.

6. Peru: The Cookbook by Gastón Acurio and a bottle of Pisco Portón

Peruvian food is often called “the next big thing,” and this book claims to be the definitive guide to the cuisine.  If you’ve had quinoa foisted upon you in the past year, and we’re certain you have, you can thank (or blame) Peru. So why not learn something to do with the stuff from an authoritative source?

Please don’t confuse Portón with Patrón, although either bottle would probably be welcome on Dad’s home bar. Pisco Portón is a Peruvian brandy that comes from the oldest distillery in the Americas, established in 1684. So when Dad tells you, “Back in my day…” he won’t be talking about this fruity and spicy white spirit. At least until you give him a bottle. 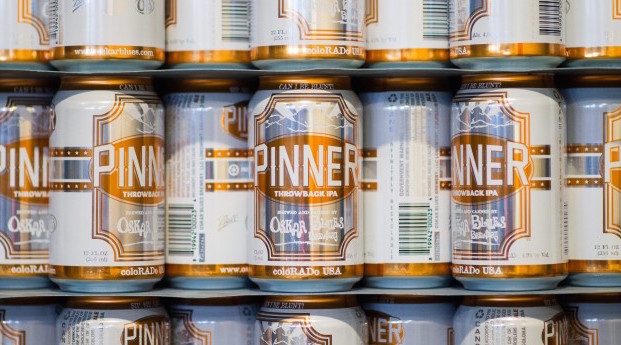 Continuing the exotic gift-idea theme, why not consider this new guide to vegan Indian cuisine? It’s full of recipes for bold-flavored curries, naans and chutneys — your father might not even notice the absence of meat in these dishes. Richa has developed recipes and techniques in her Seattle home kitchen that should be simple enough for Dad to take a crack at.

The new Oskar Blues IPA makes for an excellent pairing with Indian food, since, after all, it is an Indian Pale Ale. Lower in alcohol at 4.9 percent ABV and milder than most cult IPAs at just 35 IBUs, Pinner Throwback IPA exhibits crisp fruity characters that play well with Richa’s recipes. And if Dad doesn’t get the pot reference in the name of the beer, you don’t have to tell him. Playing dumb has worked with him for years, amiright?

8. The Cuban Table: A Celebration of Food, Flavors, and History by Ana Sofia Palaez plus a bottle of Afrohead XO Rum

Hopefully you’ll be able to take your dad on a trip to Cuba to enjoy the music, cuisine and badass old automobiles sometime when he’s still young enough to enjoy the trip. Until then, whet his appetite with this tome describing the history and cultural significance of Cuban food, beyond that meaty sandwich with too much mustard on it. Palaez managed to pry family recipes from the island that demonstrate generations of great food created by resourceful home cooks.

While you can’t yet get a bottle of Havana Club unless you sneak it home from a trip to Cancun, Afrohead XO is another rare find from the Caribbean. Only available in limited U.S. markets so far, there are a few online retailers that will ship you a bottle of this creamy Barbadian rum that is aged at least 15 years in oak to develop an extremely complex flavor profile. This is meant for a snifter, not mixed with coke in a Cuba Libre.

9. Scottish Toasts by Ivor Ben McIvor with a bottle of Caribbean Cask scotch from The Balvenie

You can always depend on dear old Dad to give a proper toast at a family gathering, but even he could use some more ammo in his speech-making repertoire. This book is a reprint of a 1908 book of Caledonian toasts. Perfect for Burns Night or any gathering where friends share a wee dram, this book is as classic as your “da.”

The Scots at The Balvenie are also crazy smart, and their Caribbean Cask is a great example of their wiles. After aging their single malt whisky in traditional oak casks for 14 years, Caribbean Cask is finished in barrels that previously held rum. The Balvenie purchases the white rum from island producers, ages it until it turns golden, sells the rum for more than they paid for it and then uses their own barrels to create a scotch that they get even more for. Thanks to the fruity toffee notes added from the rum, it’s totally worth it.

Get more ideas for Father’s Day on Food Republic: