The Kentucky Derby always creeps up on me. I never remember it’s actually Derby Day — held on the first Saturday in May — until it’s, well, Derby Day. Truth be told, I’m more interested (like much of the population, I suspect) in enjoying the one drink that is synonymous with our most famous equine race than in the race itself. When made well, the mint julep is one of the most august libations ever created and certainly one of the most refreshing. But rarely is it executed with the dexterity it deserves — and talked about beyond that foggy afternoon in May.

David Wondrich, the world’s foremost authority on cocktail lore, recently revised his award-winning tome — Imbibe! — to include a lengthier section for the julep. He states that references to the drink as a medicinal tonic were found as early as 900 A.D., but it was around the 1770s in Virginia that juleps began to be enjoyed as a refreshing beverage, and he goes on to call the julep “the first true American drink.”

In his book, The Mint Julep: The Very Dream of Drinks, Joshua Soule Smith writes: “The Mint Julep has aroused almost as much argument as the war between the States. The controversy over the correct receipt for making the famous drink has raged back and forth between Kentucky and Maryland, Louisiana and Georgia, and heated discussions, to say nothing of wagers, are likely to accompany the mere mention of the drink. [Yet] the subtle blending of cold spring water with fragrant mint and good bourbon whiskey and cracked ice somehow evokes the whole charm of the Blue Grass countryside.” How romantic.

However, the last time I went to Churchill Downs, the home of the Kentucky Derby, someone threw up on my shoes. That was awesome. Unless you’re lucky enough to be invited, or scam your way into the stands, where the South’s bourgeois still wear monocles and enjoy an unobstructed view of the race (with bottomless champagne and juleps no doubt), then I would certainly hold off on making the pilgrimage. Best to stay at home, turn on the radio and pour yourself another bourbon.

Or a mint julep. It’s a fairly simple drink to make, given that it only consists of three main ingredients: whiskey (though some delicious variations can be made with a variety of other base spirits), sugar and mint. There are, however, a few simple tips that us professional bartenders use to reach julep nirvana. But before we talk about whiskey — always a good place to start any civilized conversation — let’s first discuss the importance of ice.

For most people, ice is just frozen water, whether it’s destined for a glass of lemonade or an old-fashioned. But in the cocktail world, ice is of utmost importance to us bar nerds, and when it comes to the mint julep, that ice must be crushed. Without it, the drink just isn’t the same. You could buy an ice crusher, which might set you back less than $50, although you could get a similar result in a more rudimentary manner: putting the ice cubes in a tea towel and smashing them with a rolling pin. Hey, it works. 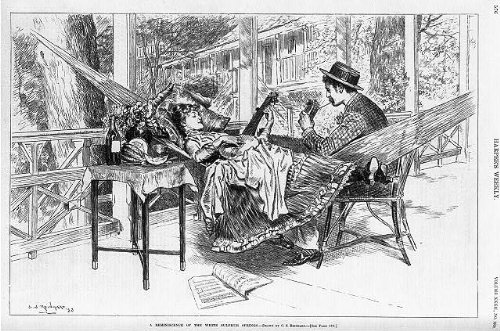 A Reminiscence of the White Sulphur Springs depicts julep drinking in Harpers in 1888.

The word “julep” is believed to have come from the Arabic word julab, meaning rosewater, and perhaps describes the strong floral aromas one gets from the flower’s essence and what we now get from the mint. The incarnations of the drink throughout the 19th century were enjoyed as an eye-opener, and as Lenell Smothers states in an article in Mixologist: The Journal of the American Cocktail, “early American settlers drank juleps for breakfast like coffee is drunk today.” Amen to that.

While no one seems to know exactly when, or where, the julep was created, most agree that its origins lie in the Southern states, where they would have been made, depending on the era, with rum, brandy and genever as well as whiskey. One of the earliest mentions of the drink in print, however, comes from London, in 1803, where it was described as “a dram of spirituous liquor that has mint steeped in it, taken by Virginians of a morning.”

At that time, ice was not yet common in bars or households, though some resourceful folks could and would have harvested ice in the winter and stored it in underground pits lined with straw, even in the summer months. Only the wealthy were using ice in their beverages at this time, and so the julep was definitely not a drink for the common people.

Traditionally, juleps were served in pewter mugs so they would retain their icy character, and any bar worth its mint sprigs these days continues to serve them in copper- or nickel-plated receptacles such as these. A long, slender highball glass will suffice, though, and at this point you’ll add your mint. Take 8 to 10 sprightly leaves, tear them in half and pour over two teaspoons of fine white sugar. Muddle this lightly to release the essential oils.

Whiskey legend Gary Regan, an inductee of the Bourbon Hall of Fame, doesn’t actually put mint into his julep, preferring instead to garnish the top of the drink with a veritable forest of mint sprigs. The aroma is completely intoxicating. Joaquin Simo, one of the country’s finest barkeeps (and owner of New York’s Pouring Ribbons), once told me that any bartender who leaves the muddled mint in the bottom of the julep cup would probably leave a live snake in a baby’s crib. Duly noted.

Now it’s whiskey time. But before you nonchalantly throw in whatever whiskey is at hand, remember this: The mint julep is a drink that simply must have a boozy dram as its base. The one glorious thing we love about a perfectly made julep is that icy crust that forms on the outside of the vessel, though with that crushed ice comes a lot of water, especially in the balmy Southern heat of Kentucky. You’ll want something over 100 proof here, people. Look for Booker’s, Baker’s, Wild Turkey 101, Knob Creek, Parker’s Heritage or Weller 107 to name only a few.

For the record, the “official” whiskey for the Derby is Early Times (which is not strictly a bourbon, not legally anyway), produced at the Brown Forman distillery in Shively, just off the Dixie Highway. If I recall, they make something rather heinous for the day’s festivities called Early-Times-Mint-Julep-Ready-to-Serve-Cocktail. This is simply poured over watery ice, garnished with a forlorn sprig of mint that never stood a chance in the humid May heat and brought around the crowd in trays by pretty young things. They sell well over 100,000 during the two-day extravaganza. 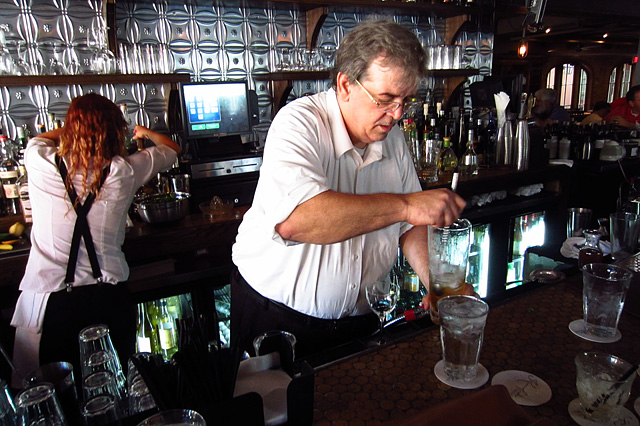 Chris McMillan, bartender at Kingfish restaurant in New Orleans, is the guy to see for a julep in the South.

Once you’ve added your whiskey, fill the glass or mug halfway with crushed ice and mix well using a long spoon. Fill the remainder of the glass with crushed ice until a fine mound protrudes over the glass. Add an obnoxiously large sprig of mint and serve with a straw, always carefully placed right next to the bushel so you can inhale those beautiful fresh mint aromas. And there you have the easiest and best mint julep.

My favorite place to enjoy a pitch-perfect julep is in the ethereal back garden of Maison Premiere in Williamsburg. They throw an insane Derby party every year (recommended if you can get in), for which their cocktail guy, Maxwell Britten, curates a stellar list of julep variations that might include amontillado sherry, spiced banana syrup, apricot preserves or chocolate.

The best julep to be found in all the land, however, is made by the sure hands of Chris McMillan, a veteran bartender who will recite the lengthy poem by the aforementioned J. Soule Smith as he constructs his own version. If you make it to New Orleans, you can find him manning the bar at Kingfish restaurant. It’s quite an experience, and he is quite a character. You’ll never look at the drink the same way again.