Looking at a Jackson Pollock painting — so vivid and frenetic, as they often were, with fiercely splattered colors — it’s easy to detect the fire that burned within the artist, the distress he experienced through his alcoholism and the genius that drove his influential technique. What’s more elusive, though, is the side of Pollock that was keenly attuned to nature and agriculture, and that often found him in the kitchen alongside his wife, fellow painter Lee Krasner, kneading dough to make rye bread or apple pie.

The last 11 years of Pollock’s life, when he lived in the East Hampton hamlet of Springs, New York, was a period of immense creative achievement, famously marked by Life magazine’s publication of an article titled “Jackson Pollock: Is he the greatest living painter in the United States?” It was also a time when Pollock struggled greatly with alcoholism, undergoing treatment and achieving two years of sobriety before falling off the wagon and ultimately dying when he crashed his car while driving drunk.

But during those years, the painter found solace in cooking, gardening, fishing with friends in Montauk and clamming in Accabonac Creek – the babbling stream that inspired a series of paintings by the same name. Pollock is often portrayed as having expressed his emotions through painting, but he repressed them in his personal life. In growing and making food, he not only found a source of contentment, but also a connection to his upbringing in Wyoming, where he was raised on a farm.

During a photo shoot a few years ago at the Springs house, Australian photographer Robyn Lea noticed the good-quality French bakeware and tablecloths that remained from Pollock’s days there. She wondered, “Were they cooks and entertainers?” That’s how she got ahold of a collection of nearly 70 handwritten recipes that belonged to Pollock and Krasner. Lea began working with the recipes, cooking alongside her husband, and the painter’s affinity for nature and food opened a window into another side of him, one that Lea felt was underrepresented.

Jackson Pollock, the baker, the gardener, the nostalgic and sensitive person, came into view as Lea baked his award-winning apple pie, and as she cooked the pork and mushroom spaghetti sauce that he learned from Rita Benton, the wife of his mentor, muralist Thomas Hart Benton. At the outset, with what she calls a “naive” understanding of his artistic work, Lea had thought that Pollock couldn’t possibly be a precise, thoughtful cook. “I thought he’d be the one who splats everything into the pan, but it was the opposite,” she explains when we meet for an interview in anticipation of her new book, Dinner With Jackson Pollock: Recipes, Art & Nature, which comes out this month. 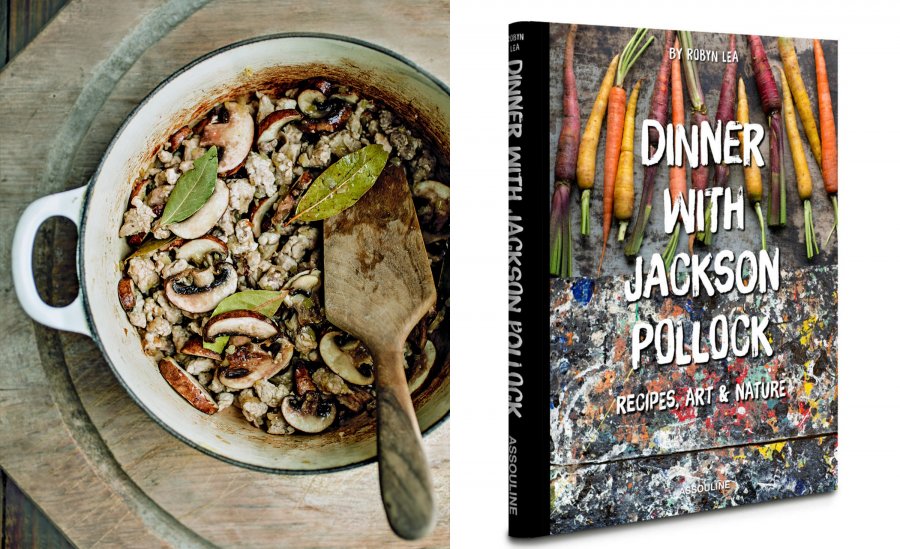 Through studying Pollock’s relationship with food, Lea saw the iconic, mainstream view she held of him crumble, as she reconstructed him “dish by dish, literally,” until she had a new image of the painter. “Before I had this view that he was a slightly mad genius, an abstract action painter, but now I see this very sensitive side, perhaps a man who needed the alcohol to cover up some of that sensitivity sometimes,” she says.

Apart from providing emotional grounding, food connected Pollock to his family. He was known for his rye-based white bread, which he likely learned from his mother, who had at least ten bread recipes. And vegetables made Pollock think of how much pride his father took in his produce, including a watermelon that garnered prizes at a local fair. Pollock saw the vegetables he grew as naturally occurring works of art. “He was obsessed with the color of his eggplants,” says Lea, recounting a story she learned while researching the book, “and he showed them to his friend Ted Dragon. Jackson spat on the eggplant, polished it, said, ‘Now that’s real color.’”

Having spent a good deal of time at the Springs house over the course of various photo shoots there, Lea saw the property in all seasons and became well-acquainted with the flora and fauna, “the birds and wild turkeys walking through the forest, and the deer.” She carried this intuitive approach over to her photography, taking advantage of natural light, thinking about how a dish might have warmed the household on a certain cold evening, imagining Pollock carrying fresh produce in from his garden.

Working with various chefs, including Michael Rozzi of 1770 House in East Hampton, who had grown up in the area and knew about local and wild ingredients, Lea photographed the dishes from Pollock and Krasner’s recipes. During that five-day shoot, the team took a sojourn to Pollock’s favorite beach, near a lighthouse, where Lea knew he used to fish with friends. There was snow on the beach that day, and the sight struck Lea as so natural, yet ethereal-seeming and uncanny. “I felt like I was on Mars, it was so different visually,” she says.

In a sense, Lea’s experience on that beach speaks to her relationship to Pollock himself, as she came to it, through his food: There is Jackson Pollock, the cook, the patient baker, and the gardener, connected to nature and its rhythms. Then there is Jackson Pollock, the violent and uncontrollable drinker, the prodigious painter, the aesthetic rule-breaker. “Everyone feels they know who this person is, and people judge very quickly,” she says. “There’s something very normal and simple about seeing a person’s domestic day-to-day.” And there might not be anything more normal than homemade apple pie – even when it’s made with a recipe from one of America’s most cherished painters.