New York City, a place of perpetual chef churn and restaurant turnover, takes a bit of a breather from openings in the winter months. Working cooks take vacations (on the Caribbean festival circuit and otherwise), and media members would rather catch up on Game of Thrones than schlep to a launch event. In the end, it’s a welcome pause for all involved. But come March, everything starts to pick back up again. The plywood starts to peel off like that Canada Goose jacket on a 60-degree day, and everybody gets excited about eating at restaurants again. Okay, New Yorkers are always into eating at restaurants, but you get the point. Here are eight new spots set to open around the city:

Lilia
Chef Missy Robbins served as a trusty lieutenant at Tony Mantuano’s Spiaggia in Chicago for years before earning Michelin stars at NYC’s A Voce restaurants. Nearly two years ago she walked away from it all to travel a bit and consult on the small-plates menu at Corkbuzz in Chelsea Market. Robbins, 43, also took a lot of meetings, cooking for numerous potential investors to help back her first solo restaurant. When the fresh pasta dust settled, she landed on Matt Kliegman (of the Smile and Black Seed Bagels). The pair will soon open Lilia in a former auto-repair garage on Union Avenue in Williamsburg.

“I am excited to be part of a different neighborhood and have a somewhat more casual restaurant than I have worked in previously,” says Robbins of the airy space located a few blocks from McCarren Park. But certainly not too casual. This is the increasingly affluent Williamsburg of 2015 after all — i-banker land, where Alsatian Pinot Blanc trumps PBR on most restaurant tables. Robbins says the cooking and flavors will be familiar to her followers, with “lots of herbs, acid, spicy notes, and the wood grill will add another dimension to that.” Indeed, the chef has secured a wood-fired grill, a relative rarity in building-code-crazy NYC. Robbins is tight-lipped on specific menu items (“We’re still testing!”) but emphasized that along with meat and fish, pasta will be key. “As you guessed, that is my first love.” 567 Union Ave., Brooklyn, NY 11215

Untitled at the Whitney
The Whitney Museum is relocating to the Meatpacking District this spring after almost 40 years on the Upper East Side. Along with it will move Danny Meyer’s Untitled restaurant, which first opened on the lower level of the former Whitney space in 2011. Gramercy Tavern executive chef Michael Anthony will oversee all food and beverage operations, and his sous-chef, Suzanne Cupps, will take over as Untitled’s chef de cuisine. Located on the ground floor of the new Renzo Piano-designed building, the restaurant will showcase Anthony’s beloved style of seasonal cooking, reimagined for its contemporary setting. A more casual studio café on the eighth floor of the museum will feature outdoor seating and views of the Hudson River and the High Line. While Untitled’s menu is still in development, guests can look forward to dishes like citrus-cured Arctic char with sugar snap peas and yuzu dressing. Both the restaurant and café will begin service on May 1, coinciding with the Whitney’s reopening. 99 Gansevoort St., New York, NY 10014, untitledatthewhitney.com

Streetbird Rotisserie
Marcus Samuelsson will open his second NYC restaurant, a kitchenette titled Streetbird Rotisserie, in Harlem in late spring. Details are scarce at the moment, but the celebrity chef and Food Republic cofounder’s new spot will be more casual than his groundbreaking Red Rooster, located just a few blocks uptown. Samuelsson experimented with menu items last month at a one-night-only pop-up on the Lower East Side, and rotisserie chicken will certainly be one of the staples. Other sample items include dishes like tack tack with house-made fermented tortilla, served with chicken thighs braised in a Mexican mole sauce and “sho’ nuff noodles” sautéed with cabbage and scallion. 2149 Frederick Douglass Blvd., New York, NY 10026

Sessanta
John McDonald and Steven Eckler of Mercer Street Hospitality (Lure Fishbar, El Toro Blanco, Bowery Meat Company) have teamed up with Jason Pomeranc, owner of Thompson Hotels, to open Sessanta at SIXTY Hotel in SoHo this May. Former Hearth and August chef Jordan Frosolone (whose family is from Palermo, Italy) will helm the kitchen and offer coastal Italian and Sicilian cuisine, mixing traditional and contemporary takes. Taking over the sleek, expansive space that housed trendy Thai kitchen Kittichai for ten years, the chef has put together a menu that includes pork sausage with peppers, Sicilian honey and caciocavallo, and fennel tortellini with pine nuts, golden raisins, saffron and fried sardines. The wine list is centered on varietals from Sicily, Puglia and Campania. The team’s swanky Gordon Bar debuted on the second floor of the hotel in December. 60 Thompson St., New York, NY 10012 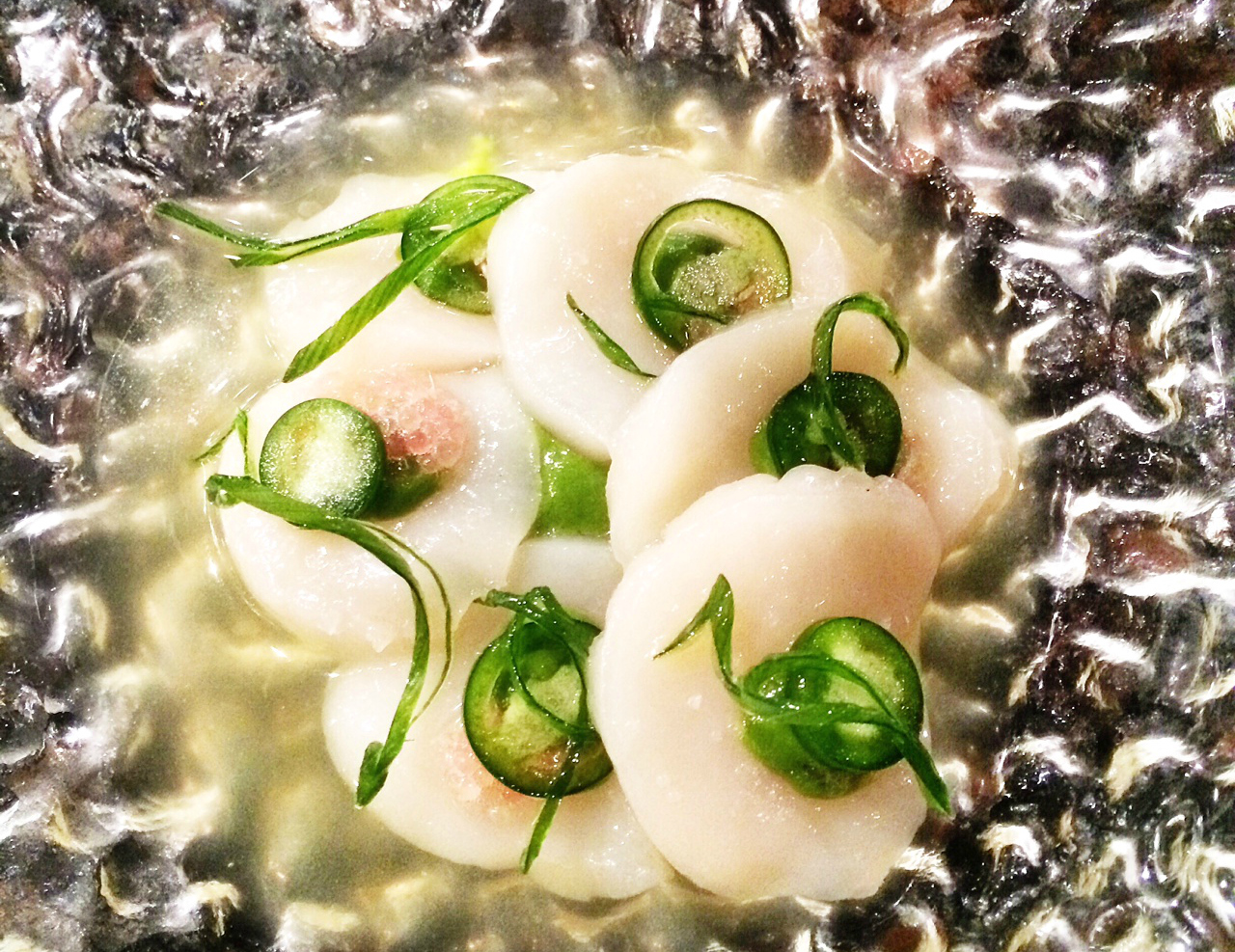 Sol
While high-minded cocktail bars like Death & Co. and Cienfuegos have long been his calling card, Ravi DeRossi recently struck restaurant gold at the excellent Bergen Hill, which we once dubbed one of the most inventive seafood restaurants in America. Still is. DeRossi hopes to continue the streak with Sol, a tiny counter-only Spanish seafood restaurant on Macdougal Street. The chef here is Colombia-born Willy Ono, who spent time at Noma and Mugaritz, and most recently La Fonda del Sol in New York. While rooted in Spain, Ono’s cooking also invites the flavors of South America to the party. During a recent preview, one of the highlights was raw sea bream served with a bright Peruvian aji amarillo pepper sauce and toasted Andean corn. Skilled takes on tapas dishes like gambas (served with the wonderful vegetal combo of celeriac and lovage) and patatas bravas line the menu, which is divided into toasts, vegetables and seafood. A tasting menu is planned. 127 1/2 Macdougal St. New York, NY 10012

Rosie’s
As chef and co-owner (with wife Victoria Freeman) of Cookshop, Hundred Acres and Vic’s, Marc Meyer has established himself as a leading authority on seasonal American and Mediterranean cuisines in New York City. But it’s Mexican food that will be showcased at Meyer’s “passion project,” slated to open later this month in the former Boukiés digs in the East Village. The chef will draw on his love of the cuisine — as well as a research trip to visit Diana Kennedy in Mexico earlier this year ­— in an effort to capture some of the essential elements of Mexican food, “the earthiness and aromas of the cuisine that fulfill me.” Expect traditional takes on tacos, tortas, tamales and whole roasted fish to complement hearty stews and masa-based snacks served at a 12-seat bar. 29 E. 2nd St., New York, NY 10003

Lupulo
“Shrimp as big as a baby’s arm on the barbie,” was the video Instagram chef Seamus Mullen sent out while hanging out — and eating massive shrimp — recently in the Lupulo kitchen with his buddy George Mendes. We’ve been waiting for this opening for a hot minute now (it’s located a few blocks from Food Republic HQ), and this sign of life is promising. Mendes will soon be opening what he’s told us is a “rustic Portuguese café” with many so-called “peasant dishes,” including gratins, casseroles, a lamb braise and plenty of bacalhau (salted cod). The restaurant will be equipped with a large wood-burning oven, which will be a primary focus. He’ll be cooking a butterflied chicken with piri piri, a hot and flavorful South African chili. While there will be plenty of Portuguese wine available, beer is center stage, with at least 12 craft offerings on tap. As for Portuguese beer, it’s a big question for the chef, who says he’s still researching. “I’m gonna definitely try to bring some cool stuff into the U.S.” 835 Ave. of the Americas, New York, NY 10001

Also see: 22 Cookbooks We Will Be Reading This Spring