Tony Mantuano will forever remember the day he was mistaken for a Florentine. He was waiting outside a shop in Tuscany’s capital city when an Italian couple approached him and asked for directions. “It made the trip, right?” Mantuano’s wife, Cathy, recalls. “I think it was the shoes — Italians notice shoes.”

As a second-generation Hungarian, I don’t notice Mantuano’s shoes as we congregate in the lounge at Spiaggia, the couple’s first venture, which remains Chicago’s only four-star Italian restaurant 30 years after opening. But I do notice the attire. The chef’s eyebrows are only partially hidden by Buddy Holly-esque frames, and fine pinstripes run down a dark jacket that sheaths a lavender button-down. It reads serious but playful — not a far cry from the elevated Italian dishes his menu offers — and so does his drink order.

“I’m not working today,” Mantuano says, watching a slow pour of Pierre Gimonnet Blanc de Blancs fill his glass. On a normal day, the couple would be visiting any one of their other four Chicago-area restaurants: Bar Toma, Terzo Piano, River Roast and Mangia Trattoria in Kenosha. But Sunday is decidedly different. Sunday is for champagne and catching up — namely via a phone call in the evening with their son, Carlo, who lives in New York. This day seems to be about tuning in fully to one another. Sundays have always been special in Mantuano’s family, dating back to his childhood, when he would spend the day with his grandparents in Kenosha, Wisconsin.

Kenosha, as it turns out, was a landing place for Italians from the Calabria region. Someone would get a job and send word back to the old country for others to follow. Such was the case for Mantuano’s grandfather, Salvatore, who began working at a mattress factory before he and Tony’s grandmother, Gisela, opened Mantuano Food Shop, an Italian-goods store. Gisela ran the shop, and Salvatore was the butcher. “He would save this part for Mrs. Aiello because she liked this, and so on — every family had their favorite cut,” Mantuano says. “Being in the center of that life and hearing Italian spoken every day between the two of them and their customers — it was a different world for me.”

When Mantuano and his siblings weren’t finding cultural enrichment at the store, they’d traipse the seven blocks to their grandparents’ home to find pasta drying on the bed, tomatoes growing in the garden and both ingredients skillfully employed in the kitchen. He remembers his grandmother’s fusilli, in particular, which she would roll out and wrap around a willow branch. “Often my father would go looking for the right branch,” he says. “I’ll remember that pasta forever.”

In high school, Mantuano put similar efforts into his own cooking and ignored the curious glances of others. “My lunches were always a little more weird than others,” he says, detailing the way he used to hollow out homemade Italian bread and fill it with sausages and peppers before topping it with oil. It was then that Mantuano also developed an interest in music, playing the trombone in rock and jazz bands and studying music at the University of Wisconsin at Milwaukee. He eventually formed his own rock-jazz band named Cork. A server circles back to our table with proof: a cocktail napkin with a 1975 image of seven members identically clad in white bell-bottoms and halfway unbuttoned shirts. The napkin accompanies the restaurant’s Mantuano cocktail, with reposado tequila, grapefruit-infused Aperol and prosecco, and has caused at least one Bee Gees comparison.

When he realized a career in music would demand too much practice, it was cooking Mantuano considered next. His dad, a meatpacker, called upon some industry contacts to land him a line-cook job at Nantucket Shores, a Milwaukee-based restaurant in the Astor Hotel. It was there that he met Cathy, his future wife, who was working as a server at the restaurant at the time. They both shared an Italian heritage — her maternal grandparents were from Molise — and a passion for the country’s culture and food. Working in a restaurant and living in a city that didn’t challenge their Italian-focused dining ambitions, the pair frequently discussed dreams of fleeing to do the kind of food they grew up on. They also did their research, reading Gourmet, buying cookbooks and hosting dinner parties. There was even talk of an apartment pop-up — and this was back in the ’70s.

“We knew from reading that more was going on than what we were able to get to and see,” says Cathy Mantuano. The couple began writing to restaurateurs in big cities and received an offer for Tony at Pronto in Chicago, which he happily accepted upon seeing the storefront. “They were making fresh pasta and hanging it in the window,” he recalls. “I had never seen that before in 1980.” Meanwhile, Cathy was waitressing at Larry Levy’s Chestnut Street Grill, where she caught wind of Levy’s latest development and put up her then fiancé for the job. “Larry had been to Italy and had always said the food tasted differently there,” she explains. “He wanted to open that kind of restaurant, and it was the same goal we had.”

One marriage and Italian honeymoon later, Levy sent the newlyweds back to Italy for official job training, which they acquired through a half dozen restaurants, including the 30-seat Ristorante dal Pescatore in Lombardia, which boasts three Michelin stars. “The father parked the cars, the mother worked one station, the son would seat the dining room, his wife became the chef,” Mantuano says. “It instantly made us understand what it was like to do Italian elegantly.” 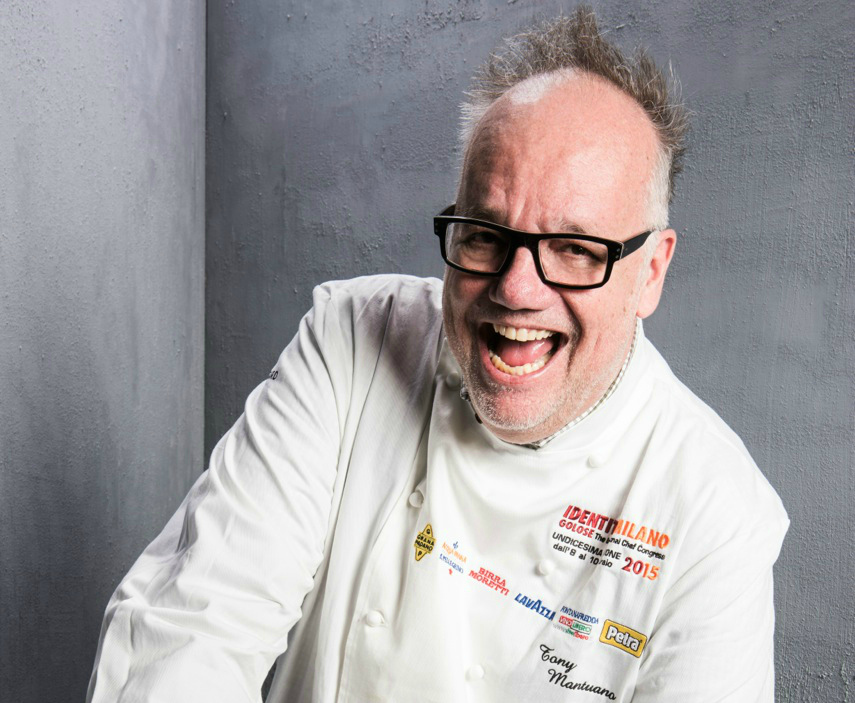 It was exactly the encouragement the Mantuanos needed to give Chicago what it lacked most in 1984: high-caliber Italian. “There were places in the city that had tuxedoed waiters, but there wasn’t any place where the food rivaled other four-star French restaurants,” Mantuano explains. In that moment, one such example is set before us: a serving of hand-cut tajarin with butter and Parmigiano-Reggiano, towering like a perfectly behaved bottom-up tornado beneath a garnish of Umbrian black truffles. And while most restaurateurs would’ve been quick to call in an Italian chef for the challenge, Mantuano is thankful for the inverse experience Levy provided them. “We realized we didn’t have to say, ‘Oh, because he’s making veal scallopini, we should make it — we immediately knew we could be like those restaurants and directly import flavors.”

No matter what people said.

“When we first opened, an industry guest had said, ‘Kid, you’re not going to make it unless you put a meatball on the menu,’” Cathy Mantuano recalls. Multiple James Beard Award nominations, two cookbooks and numerous visits from Connoiseur-In-Chief Barack Obama prove otherwise. Three decades later, there’s still not a meatball in sight.

Still, the endeavor wasn’t without challenges. The flavors found in Italy’s backyard weren’t as easily accessible in 1984, nor were high-quality farmers. “We’d order radicchio and watch red cabbage come in the door,” says Tony Mantuano. Today, they rely heavily on their relationships with importers and purveyors, a network highlighted collectively on the meat and cheese selection alone: bresaola from Chicago-based ‘Nduja Artisans, blue-veined goat’s milk cheese from Indiana and a prosecco-washed ubriaco from Piedmonte, which our server assures us will go brilliantly with the champagne. It does.

I ask the couple to describe their relationship with Spiaggia as compared to their other restaurants. “This is probably our home, the most special of them all,” Mantuano notes. And after nearly two convivial hours together, I almost forget I’m in a restaurant at all — that is, until a server returns with two menus to be signed for guests in the adjacent dining room. Mantuano does so left-handedly, penning “auguri” in each before he and Cathy head off to call their son — and before their Sunday really begins.