With venerable spots like Ayada, Boon Chu and Chao Thai, the ethnic enclave of Elmhurst, Queens, has had a notable Thai presence for quite some time. In the past year, another five places have joined the mix, effectively turning Little Bangkok into a veritable Thai Town. Some have large, daunting menus, while others serve such hyper-specific specialties as khao mun gai and boat noodle soup. If Thai Town keeps growing at this pace, there may soon be a Thai chicken-heart cart. In the meantime, enjoy exploring our favorite haunts.

1. Plant Love House
Manadsanan Sutipayakul and her family run this oddly named joint, specializing in hawker fare and desserts lovingly made by her daughters. Boat noodles, like blood-enriched keaw teaw num tok — a pork lover’s paradise of springy meatballs, pork meat and a topping of fried skin, along with rice noodles and crunchy bits of Chinese broccoli — are all excellent. Each bowl sings with just the right balance of heat, sourness, sweetness and fishiness. Yum kanom jeen, a bright, briny tangle of fermented rice noodles topped with a crumble of crispy fried salmon and seasoned with lime and chili, is also excellent, as is a large-format papaya salad. Think of the latter as tom yum plus. It comes freighted with pork cracklings, fried chicken wings, wedges of hard-boiled egg and homemade sour sausage with chilies. For an extra charge, you can add preserved fish and/or raw crab. Go for both and feel the love. For dessert, cool off with some of the house’s special coconut ice cream, lashed with raw egg yolk and left to freeze. 86-08 Whitney Avenue, Elmhurst, NY 11373, 718-565-2010

2. Khao Kang
With its heady aromas and fierce jungle curry, this steam-table joint recalls the good old days of Sripraphai, before it skyrocketed to popularity, taking up three storefronts. Selections change daily, according to the chef’s whim, but they are always fragrant, delicious and often unabashedly spicy. Favorites include a fiery scramble of Isaan sour sausage and egg, sweet stewed pork belly and garlicky fried pork. On weekends, you’ll find banana leaf parcels of hamok — steamed fish seasoned with kaffir lime, basil and chili — and, for dessert, khanom bueang. The sweet-savory rice flour crepes, smeared with meringue, come with one of two fillings: coconut and foi thong, strands of candied egg yolk; or ruddy salted coconut seasoned with dried shrimp and sesame seeds. Compare them to tacos if you must. 76-20 Woodside Avenue, Elmhurst, 11373, 718-662-8721

3. Sugar Club
Three years ago, when Chirawat Withanwattama opened Sugar Club, it was part video store, part grocery, part community hub. On weekends, the counter was lined with desserts, soups, Thai pork jerky and DIY kits for papaya salad. Oh, and maeng kana, a snack of crushed peanuts, cubed ginger, bits of lime, chilies and dried shrimp to be wrapped in Chinese broccoli leaves. This past December, Withanwattama tripled the size of the store, adding a café, seating, more groceries and even more prepared food, which is now available on a daily basis. Along with an invigorating kha-fai ron, with sweetened condensed milk sitting at the bottom, the café makes various dessert toasts and something called egg pan, or kai kra ta. It consists of an egg sunny-side up, served in the pan it’s fried in, along with sweet pork sausage, chopped pork loaf and ground pork. At first blush, it looks American, but with a condiment caddy of ketchup, Maggi and white pepper, it couldn’t possibly be more Thai. 81-18 Broadway, Elmhurst, 11373, 718-565-9018 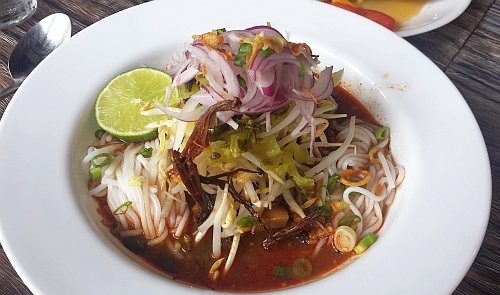 4. Pata Paplean
Imagine if you gave your grandmother a hit of blotter acid and told her to decorate a tavern. That only partially captures the vibe at funky Thai bar Pata Paplean, where the loo is decked out to look like a disco. Named for a gorilla in a zoo in a Bangkok department store, the cocktails are inspired by such dishes as tom yum and mango sticky rice. A menu of small bites includes larb ma-ma pa-plean — noodles with ground pork, roasted rice and chili lime — and yum pla-pong, sardine salad with spicy citrus dressing. During the day on weekends and Mondays, it’s Thai boat-noodle time, as chefs Cherry and Chompoo whip up small bowls of amazing noodles, including tom yum haeng, a soupless version of the Thai classic. Springy yellow noodles, fish sauce, lime juice, ground pork and fish balls all go into the bowl, which is topped with sugar, chili, cilantro and golden shards of fried pork. Pro tip: Follow Pata Paplean on Facebook to make sure it is open for noodle service. 76-21 Woodside Avenue, Elmhurst, 11373, 718-651-2076

5. Paet Rio
Chef-owner Phimploy “Nicky” Likitsansook ran Wondee Siam in Hell’s Kitchen for some 20 years before coming to the borough that boasts the most authentic Thai food in New York City. Paet Rio is named for her home province, located in eastern Thailand. There are plenty of curries, yums and larbs on the menu, but what sets it apart from other restaurants in Thai Town is a roster of 14 specialty noodle dishes, particularly something called kanom chin nam-ngiao. The dish, made with fermented rice noodles and dried kapok flower, is a staple of the Tai Yai people from Northern Thailand. It eats sort of like a Thai ragu, rich with tomato-y, porky goodness. Somehow, the flowers have an almost meaty quality. Mu ping, a type of grilled pork skewers, and por pia sod, Chinese-influenced Thai spring roll stuffed with sweet sausage, bean sprouts, crab and egg, are also excellent. So is the pla muek yang, or grilled squid with spicy sauce. 81-10 Broadway, Elmhurst, 11373 917-832-6672

6. EIM Khao Mun Kai
Chef Srivaset Sajchaacharamontri and his crew serve one thing and one thing only at this tiny spot. That’s khao mun kai, or Thai-style chicken and rice. If the wind’s right, you can detect the perfume of gingery rice and chicken stock as you exit the nearby Elmhurst Avenue subway station. Known elsewhere in Southeast Asia as Hainanese chicken and rice, EIM’s version comes with a mound of gingery rice cooked in chicken broth and enriched with Thai schmaltz. It’s topped with skin-on boneless chicken and comes with a sidecar of soup. A small corner of the plate is devoted to gizzards and liver. Use the zippy sauce made from ginger, garlic, sweet soy sauce and fermented soybean paste to season the rice. If need be, doctor it up with the jars of green chilies and garlic that grace every table. Better yet, use them to spike your soup. 81-32 Broadway, Elmhurst, 11373, 718-424-7156

7. Thai Thai Grocery
This former bodega predates the hood’s recent boom, but no trip to Thai Town is complete without visiting the irrepressible proprietor, Pajaree “P. Noi” Aekobol, whose shop is stocked with everything from all sizes of sticky rice steamers to kruk, gigantic Thai mortar and pestle, as well as Thai tea powder, herbal inhalers and hard-to-find cooking ingredients like Northern Thai curry paste. There are also plenty of snacks, like lovely translucent sheets of crunchy pork jerky. On weekends, find freshly fried kluay kha, a delectable mixture of taro, sweet potato and plantain. 76-13 Woodside Avenue, Elmhurst, NY 11373, 917-769-6168

Also Visit: Wat Buddha Thai Thavorn Vanaram
Unless it’s a festival day, or you’ve come to offer food to the monks, you won’t find much to eat, but it’s definitely worth a walk to check out this Thai temple that’s attended by everyone from local restaurateurs to American chef and Thai aficionado Andy Ricker. The grounds feature a majestic reclining Buddha. Be sure to pay your respects to the monks, and do take a few moments for contemplation in the ornate shrine room on the roof. 76-16 46th Avenue, Elmhurst, New York 11373, 718-803-9881