Nashville-based writer Chris Chamberlain profiles chefs and restaurants with particular talents for classic and reinvented Southern dishes. Now, he’s taking his investigations another link up the food chain as he travels to visit with some of those chefs’ favorite farmers, ranchers and purveyors from across the South. In a new Food Republic series,  Southern Grown , find out what makes these suppliers so special that chefs will go the extra mile to use these products in their kitchens.

Despite his reputation as one of the premier artisans of smoked meat in the country — and the ardent admiration of noted chefs and legions of fans who buy his hams and bacon through mail order — it’s hard to get Allan Benton to give himself any credit. “Aww, it’s not a difficult business,” he drawls in his self-effacing way. “It’s not rocket science. If it was, I couldn’t do it.”

Indeed, what this humble man from East Tennessee is doing is replicating an extremely low-tech process that he learned many years ago from his grandparents. The secret to Benton’s Smoky Mountain Country Hams comes from simulating the difficult environment that his grandfather encountered putting up hams over the winter to feed his family. Since 1973, Benton has been creating some of the most delicious cured hams and smoky bacon using the same basic method he saw during his mountain upbringing.

“We were hillbillies, and we always killed hogs on Thanksgiving,” Benton recalls. “Unless it was raining. So I run my equalizer room colder than most folks do, because it was wintertime when we hung our hams.” After curing the pork legs with a simple rub of salt and brown sugar, Benton ages his hams for at least eight months and as long as 18 months for his delightfully funky Tennessee prosciutto.

When he first started out in the ham business in tiny Madisonville, Tennessee, Benton felt pressure to release his products much more quickly. “I was trying to sell quality up against other people who were quick-curing their hams in 80 days,” he says. “I told my dad that I would need to switch to a shorter cure if I was going to survive. My dad said, ‘Son, if you play the other man’s game, you always lose.’ So I decided to make the best I could and quality would eventually win out.”

Chefs including David Chang, Sean Brock, Linton Hopkins, John Besh and Hugh Acheson agree with that sentiment. In a 2006 interview with John T. Edge for Gourmet, Chang told Benton exactly what he thought of his dedication: “You’re a hero to us. Your stuff is the ultimate old-school product. We can smell the work you put into it. Sometimes when you ship us a ham, we can see handprints on the box. We know that the person who packed our box trimmed our ham.”

Unlike other Southern artisans who trade on the heritage status of their ingredients, Benton emphasizes the history of his process. After years of trading with one local supplier, he now sources his hams and bellies from a variety of hog farmers across the country to keep up with demand for his products. “I grew up in rural Virginia,” Benton explains. “We didn’t have to have enough flat land to grow the corn to feed a hog, so we had to turn them loose to feed in the fall when there wasn’t much growing. Those hogs finished their lives on a diet of acorns, but we didn’t think a thing about what that did to the meat.”

At least not until Benton found himself sitting on a panel discussion at a Big Apple BBQ Block Party a dozen years ago where he heard New York Times columnist and self-proclaimed “hamthropologist” Peter Kaminsky talk about Spanish hams that were finished on acorns and brought $250 to $300 apiece on the open market. “Man, I felt my ears stand up like a rat terrier’s when they told me how much they were getting for those hams! I told Kaminsky I was gonna buy a book on those pigs and started looking for pasture-raised hogs.” For years, Benton had a reputation for producing some of the best hams available, but his supply of pigs began to dry up. “Everybody is looking for those same hogs,” he says. “Now I’m a lot more guarded about my sources.” 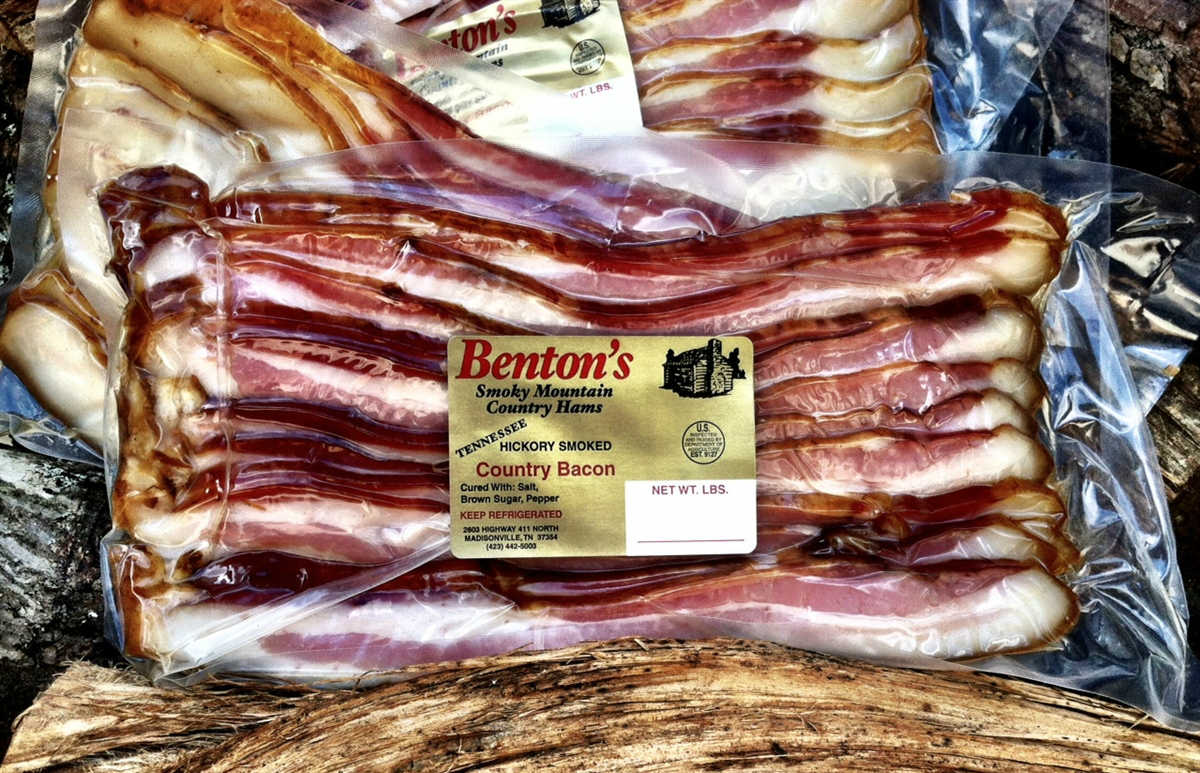 Since 1973, Benton has been making some of the most delicious cured hams and smoky bacon using the same basic method he saw during his mountain upbringing.

Initially, his target market consisted of customers in the area around Madisonville, with many of his hams heading home with tourists visiting the gift shops in the hillbilly meccas of Gatlinburg and Pigeon Forge. (Think Dollywood.) But at the much more upper-class resort of Blackberry Farm in Walland, Tennessee, a young chef named John Fleer was beginning to popularize his version of upscale Appalachian cuisine, and Benton’s hams and bacon were a key component in many of his dishes. As other notable chefs came to visit Fleer’s kitchen, he would introduce them to these remarkable ingredients, and the Benton’s brand began to appear in restaurants from Manhattan to Yountville. (And that’s just on Thomas Keller’s menus.)

“I thank those chefs every day for popularizing my product,” says Benton. “I owe every bit of my success to the creativity of these young chefs. They could make dirt and grass taste good!” Always humble, Benton doesn’t think to acknowledge that he takes commercial pigs, salt, brown sugar and wood and makes them taste amazing in the form of his famous bacon.

The secret to his sliced belly meat is in the intense smokiness that is imparted by a two-day repose in one of two smokehouses fed by small wood stoves. “I don’t care what kind of wood we use,” says Benton. “As long as it’s hickory.” He takes advantage of the sweet fog for more than just his bacon, though. Benton has smoked cocoa nibs in there for a ridiculous bar of chocolate brittle sold by Nashville artisan Olive and Sinclair. Benton counts Garrett Oliver of Brooklyn Brewing as a friend and has smoked barley for special beer projects. Even the T-shirts that Benton sells online have been known to spend a little time in the smokehouse, leading to the desire to wear them several times before the first washing and extra attention from the family dog. There are stories of UPS drivers asking chefs if they can keep the box that Benton ships his bacon in to use as potpourri in their trucks. It’s that good.

While he has no concrete plans to retire, he does have an eye on the future. A recent expansion almost doubled the size of his facility, and for the first time there is a separate space apart from the cutting and packaging area for two employees to keep up with the shipping of his products. But there’s still just one phone line into Benton’s, and it leads to an ancient rotary phone on the boss’s desk. Odds are good that Benton will be the one to answer if you call, unless he’s out making a delivery or stoking the stove in the smokehouse.

But the Willie Wonka of smoked meat won’t be able to work as long and hard as he does forever. “I just turned 68,” Benton muses. “I realized that means I’ll be 80 in 12 years, and I don’t know any 80-year-olds running around having fun.” Perhaps one day, some lucky young chef will cut open a package of smoky bacon from Benton’s Smoky Mountain Country Hams to discover a special golden slice that will be the key to the kingdom. He’d better show up ready to work.