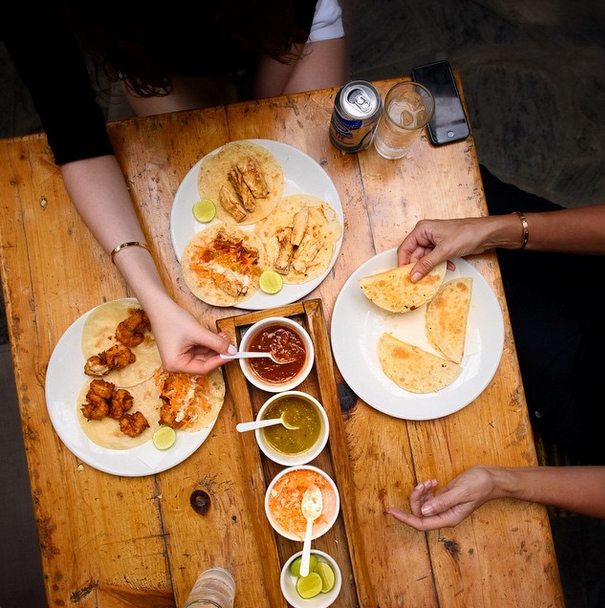 With it being Fantasy Travel Week, we wanted to shout out some of our favorite Instagram accounts that remind us on a daily basis about the incredible, Instagram-worthy world of food and drink out there. The fact that it’s 20 degrees and drafty in our Manhattan offices right now makes us all the more — how do we put it — jealous of the photographers, graphic designers, businesspeople and journalists running these colorful accounts. Here are links to their feeds, with a few favorite photos at the end.

1. Lost N Cheeseland
Lindsey Tramuta is a Paris-based writer and admitted Francophile who covers the city passionately on her blog, Lost in Cheeseland. As you would expect, her Instagram is filled with choux, galettes and plenty of croissants.

2. A Life Worth Eating
Adam Goldberg is a software engineer with a serious passion for travel, food and — if you follow him closely on Instagram — coffee. He’s a big fan of shooting objects from overhead, which of course works out quite well with bowls of noodles and lattes.

3. One Mile at a Time
Ben Schlappig is a 24-year-old full-time travel blogger who claims to fly 300,000 miles per year. The blogger often rides in business class and is a keen observer of airline food, particularly the lobster and champagne types of dishes served in the front of the bus — and in the executive airline lounges. Totally follow him if you geek out for things like a new fleet of A380s.

4. Girl Ate the World
Rather than posting all original photos, this account mostly compiles photos from women around the world holding iconic food or drink in front of recognizable backdrops. Think a Hello Kitty donut from Shibuya in Tokyo, and naan at Agra Fort in India. Also, lots and lots of ice cream. The account’s curator, Melissa, an Indonesian living in Singapore, also contributes.

5. Pissing in the Punch Bowl
Marcus Nilsson is a New York City-based photographer specializing in travel and food; he’s shot covers for Saveur and Bon Appétit and also contributes to the single-topic food journal Swallow. Some of the topics covered on his Instagram: bowls of noodles, fast food, alcohol consumption (large quantities at times), hamburgers and traveling to Mexico (a lot).

6. Sam Horine
Horine, a Brooklyn-based photographer and photo instructor, is no stranger to us at Food Republic. Back in March 2012, when Instagram was a wee lad (and not owned by Facebook), we asked Horine to take over our account during a food-centric trip to Rome. He hasn’t stopped shooting visually stunning landscapes, with frequent trips to exotic destinations like Israel, Turkey, Puerto Rico and Africa.

7. Faimfatale
As one of the partners of Austin, Texas, restaurant Qui, Deana Saukam is a gatekeeper of one of the country’s top restaurants. And when she travels with her fiancée, chef Paul Qui, she often finds herself in some pretty cool places to eat food — iPhone in hand ready to shoot. Some of Saukam’s recent destinations have included Japan, Vietnam, Iceland and Italy (a few times). And of course, there are plenty of taco shots from her hometown.

8. Life & Thyme
Life & Thyme is a Los Angeles-based magazine documenting food culture around the globe, with stories focusing on chefs, restaurants, farmers and all sorts of food personalities in places around the globe, like New York, Nashville and Scotland. Similar to the @FoodRepublic account, the L&T Instagram takes you behind the scenes a bit, with editors contributing frequently.