It’s not exactly a taco. And it’s not directly connected to Goa. But the food at minuscule pop-up Goa Taco is certainly making a name for itself on New York City’s Lower East Side. It all begins with the paratha, a multilayered doughy flatbread from India packed with gluten and ghee that owner/chef Duvaldi Marneweck describes as “the love child of the tortilla and the croissant.” In its home country, the paratha is typically eaten as an accompaniment to curries. At Goa Taco, it’s folded in half and filled — quite liberally — with various meats, vegetables and sauces from around the world.

“It’s been inspired by my travels,” says Marneweck, who knows a thing or two about the topic. “It is not specific to a region or a cuisine.” The South African native spent 12 years as a chef in fine dining establishments in Perth, Australia, and London before moving to New York and creating Goa Taco, which was born at Park Slope Flea’s Smorgasburg Junior last summer before being granted its current space on Delancey Street in mid-December (the lease is up at the end of February).

The six-taco menu is full of global influences — there are nods to Mexico (chicken chorizo), Vietnam (turkey-breast bánh mì) and the Mediterranean (lamb shoulder with tzatziki and eggplant salsa). The closest existing item to these tacos might be the kati roll, an Indian street food that consists of curry-filled parathas. “So it’s pretty Indian, whereas [Goa Taco] is not,” concludes Marneweck. 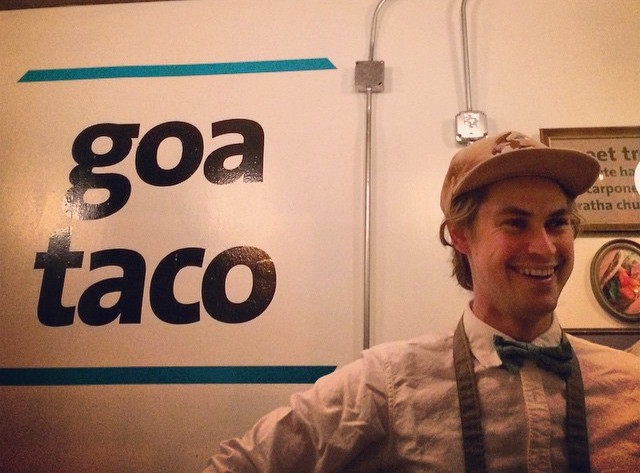 Still, the chef chose to honor the birthplace of the paratha when naming his venture. Even though the flaky bread originates from Punjab and not from the south of the country (where Goa is located), Marneweck found the name fitting as “a light connection to India.” In addition, he continues, “In Australia, when you feel like having something, people typically say, ‘I could go a beer,’ so it’s a play on that. We want you to go a taco!”

Go a taco I did indeed during a cold evening last week, snagging one of only four stools by the window (there are also a few seats at a wooden bar, behind which Marneweck and his small team work their magic). Taking heed of posted signs warning that “one Goa taco = two regular tacos,” I ordered just two items: a slow-roasted pork belly taco and the aforementioned chicken chorizo taco. The former is packed with pickled red cabbage and chipotle mayo alongside fatty slabs of pork belly and crispy pork skins, while the latter is stuffed generously with house-made sausage, Brussels-sprout slaw and fontina cheese. Both burst with flavor yet still benefit from a dash or two of Scotch bonnet hot sauce made in house (that’s Caribbean, in case you were keeping track of all the influences here).

Margaritas and Bloody Marys keep the in-the-know crowd buzzing. The meal is completed perfectly by the single dessert listed on the menu: a paratha (what else?) rolled with hazelnut and melted chocolate and oozing with mascarpone. It’s all gloriously messy and had me licking my fingers long after leaving.

So what’s next for the South African chef who has cooked on four continents and now slings “lightly Indian” tacos with influences from another four continents…in a temporary spot in Manhattan after initially opening in Brooklyn? “We have a few ideas, but nothing is set in stone,” he admits. In other words, the time is now to go a taco.

Update: Goa Taco will now be open through at least the end of April in its current location (it is taking a month-to-month lease), as well as at Smorgasburg.

Check out what’s going on in New York City on Food Republic: