The end of our Taste Taiwan tour was no small event — quite the opposite. We’d been traveling via bus and high-speed rail for a week absorbing knowledge from local chefs, purveyors, tour guides and farmers in preparation for a chef competition of the finest caliber, held at the Tien Hsiang Lo kitchens at the Landis Taipei hotel. The three North American chefs — Stuart Cameron, Jared Case and Anthony Jacquet — faced off to see who had learned the most. They were judged by 21-year Tien Hsiang Lo restaurant veteran Kenny Liao.

With only two hours to prep and cook a winning dish, the chefs shopped at a local Taipei supermarket for the ingredients they’d selected to highlight, then hit the kitchens hard. 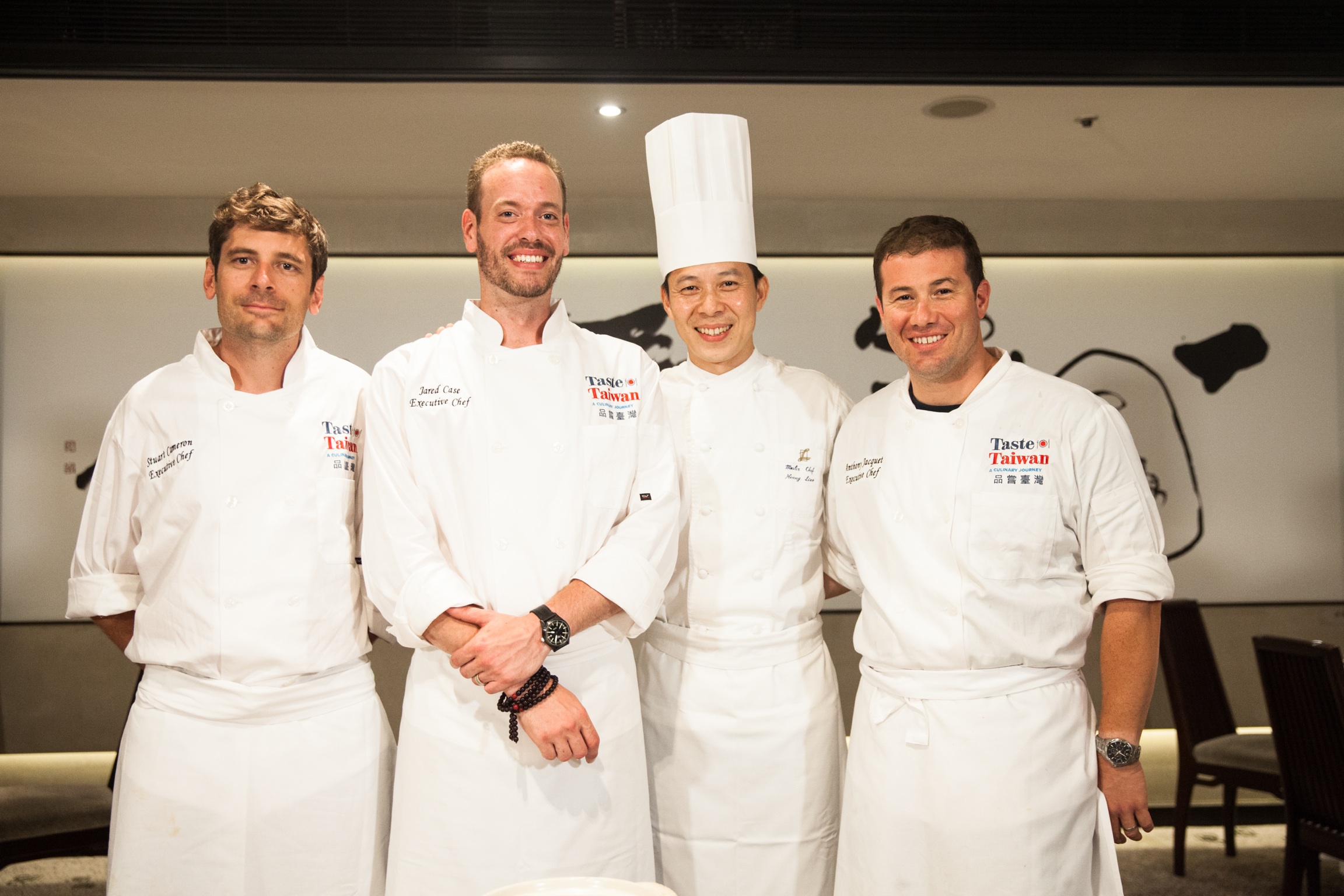 Chicago chef Jared Case of Park Grill at the city’s Millenium Park had a particularly inspirational experience barbecuing in the jungle with the indigenous people of Taiwan’s Amis tribe, who have been cooking with natural materials for centuries. Picking up fresh whole bass, local aromatics like ginger root, lemongrass, shallots and cilantro, his mission was simple: interpret the simple, flavorful stone-cooked soup he’d learned to make during the wilderness cooking adventure by superheating a large rock over a gas stove to nearly a thousand degrees, placing it in a soup tureen, pouring a quick aromatic fish stock over it and flash poaching the fish (scored to allow the heat to penetrate and cook) just before serving.

“There ended up being a fresh fish market just outside the supermarket where I bought this already-butchered fish,” said Case, on the subject of availability of superb fresh ingredients. “So when I asked for bonito for my broth, that’s where the supermarket sent me. In my restaurant, I’ll probably do this with cod since it’s more readily available, but this presentation, tableside, would work really well.”

LA chef Anthony Jacquet of The Whisper took on an ingredient he’d been admiring and enjoying for the duration of the trip: black chicken. Its glossy, jet-black skin and dark flesh is exceptionally flavorful and while it can prove to be tricky when cooking, the presentation speaks for itself.

“There’s a ton of energy in that supermarket,” he said of the shopping excursion beforehand. “It was expansive with a great selection. I almost didn’t make it out. I wanted to take the rusticity of the cuisine we’ve experienced, from the Aboriginal village to the working-class neighborhoods we visited, like the oyster farm and connect it with the more sophisticated cuisine of Taipei — the big city.”

Jacquet prepared the black chicken “three cup-style,” which was a dish we encountered in various forms throughout the tour. “It’s equal parts of soy, sesame oil and shaoxing wine,” he said, while slicing king mushrooms like scallops. “I also picked up shrimp, mountain yams and leaves, leeks and some sweet corn. But I’m really excited about that black chicken — I’ve never worked with it in my life. I saw them at Jiufen Old Street next to a cage of frogs and had my ‘aha!’ moment. The ratio of meat to fat is a little different from the chickens I’m used to cooking, but I’ve learned on this trip that the color black represents health and I want to represent Taiwanese culture as much as possible in these dishes.”

Toronto chef Stuart Cameron was the picture of the chef hard at work in the kitchen, consumed in a task I’d never witnessed before this moment and one in fact that he’d never done himself: shucking baby corn. Most people don’t think about baby corn past its common canned form, but served fresh, it takes on new life. The sous-chefs at Tien Hsiang Lo demonstrated the delicate task. Rinsing grit from greens, cleaning mushrooms, prepping proteins — it’s all the universal language.

“That supermarket is hectic and amazingly large,” he said, offering me some tiny corn to help shuck. “I don’t do square footage because I’m a chef, but it was really huge and full of incredible stuff. I’ve never had baby corn in the husk and it wasn’t really on my shopping list, but when I saw them I grabbed them.”

He chose to highlight baby lobsters, an ode to a magnificent seafood feast we’d enjoyed one day on the ocean-view highway to Hualien. “The original plan was cuttlefish, but those little live lobsters were really appealing. And nothing I’m doing right now is anything like what I do at my restaurant. I’m a little out of my element, but it’s good. I can’t wait to go home and make lap cheong with my kitchen staff.”

Using their market haul of 18-inch pieces of ginger root, enormous fresh picked king mushrooms, baseball-sized smooth-skinned limes, fresh ginkgo nuts, tangles of exotic shoots and greens with their roots still attached, a library of hot chilis, dark green and purple basil and bonito shaved before their eyes, the chefs cooked tirelessly, perfectly at home 8000 miles from their own kitchens. As they cooked, their lexicons adjusted: rice wine became shaoxing and shrimp “prawns.” After a frenzied two hours of wok-tossing, frying, steaming and roasting, the chefs brought their new signature Taiwan-influenced dishes to master chef Liao, who assessed their authenticity, overall flavor and presentation.

Chef Liao tasted Jared Case’s dish first. “The smell of the soup is of the garden and the fish is of the sea. How come the fish is so tender?” he asked. Case explained that he preserved the bass’ succulence through precise temperatures and scoring the fish in a checkerboard pattern to decrease cooking time. 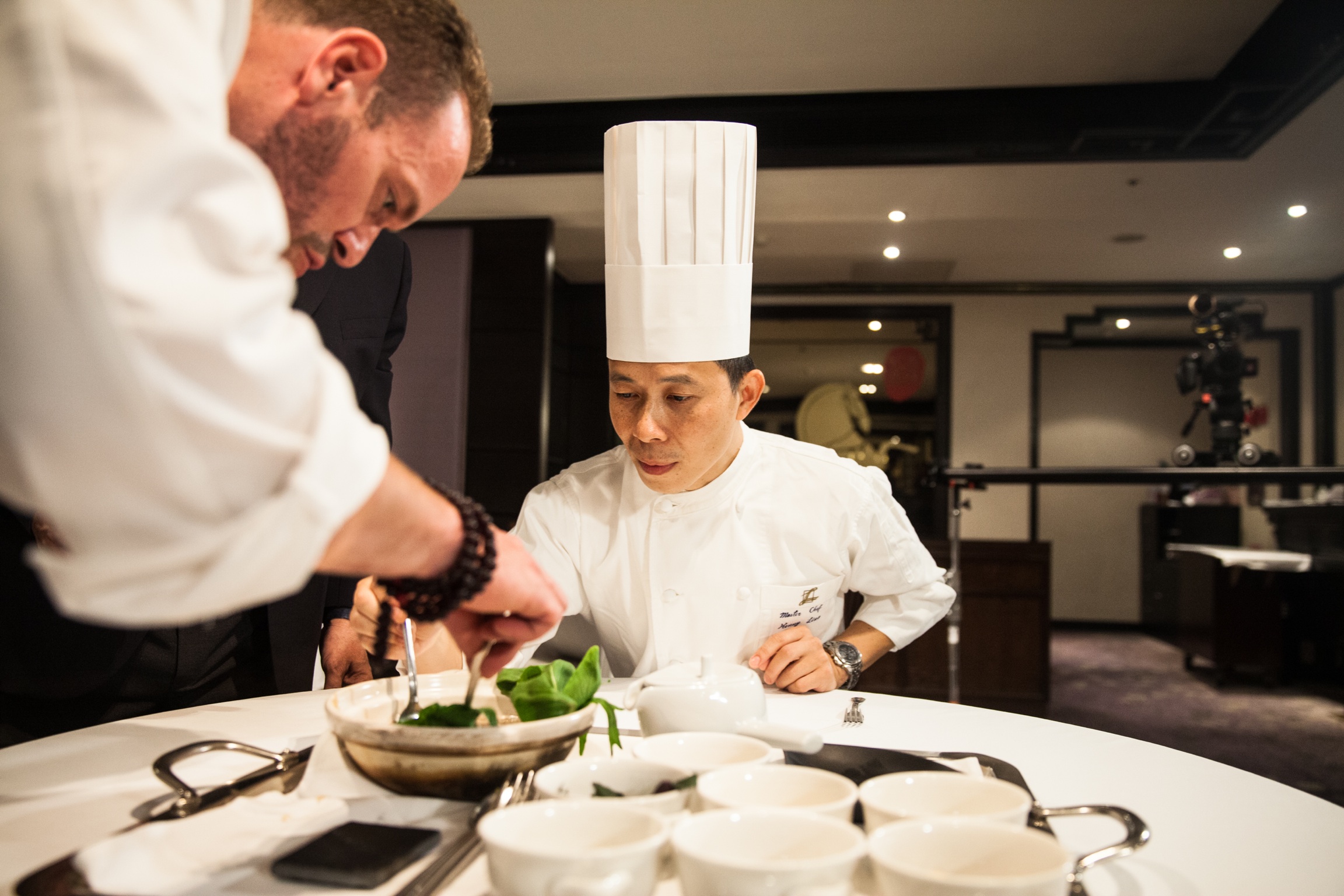 Cameron’s dishes were next: a play on Spanish tapas in the form of a lap cheong croquette with red bean aioli; blistered long beans with crispy ginger and lap cheong vinaigrette and poached baby lobster in three-cup-style beurre blanc. 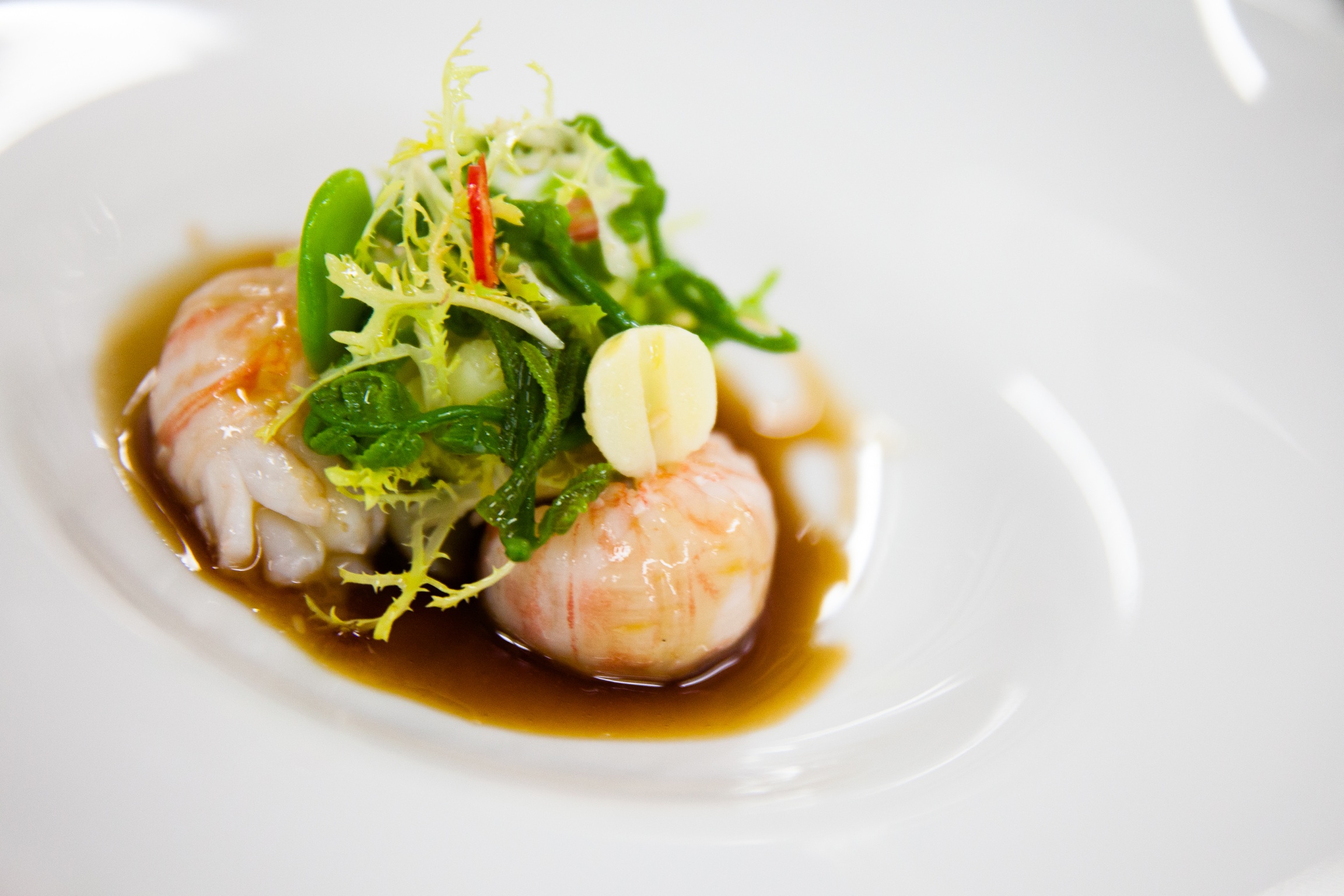 Of the lobster, Chef Liao commented, “This is really Taiwanese and very fresh. You have a special memory for flavors.” 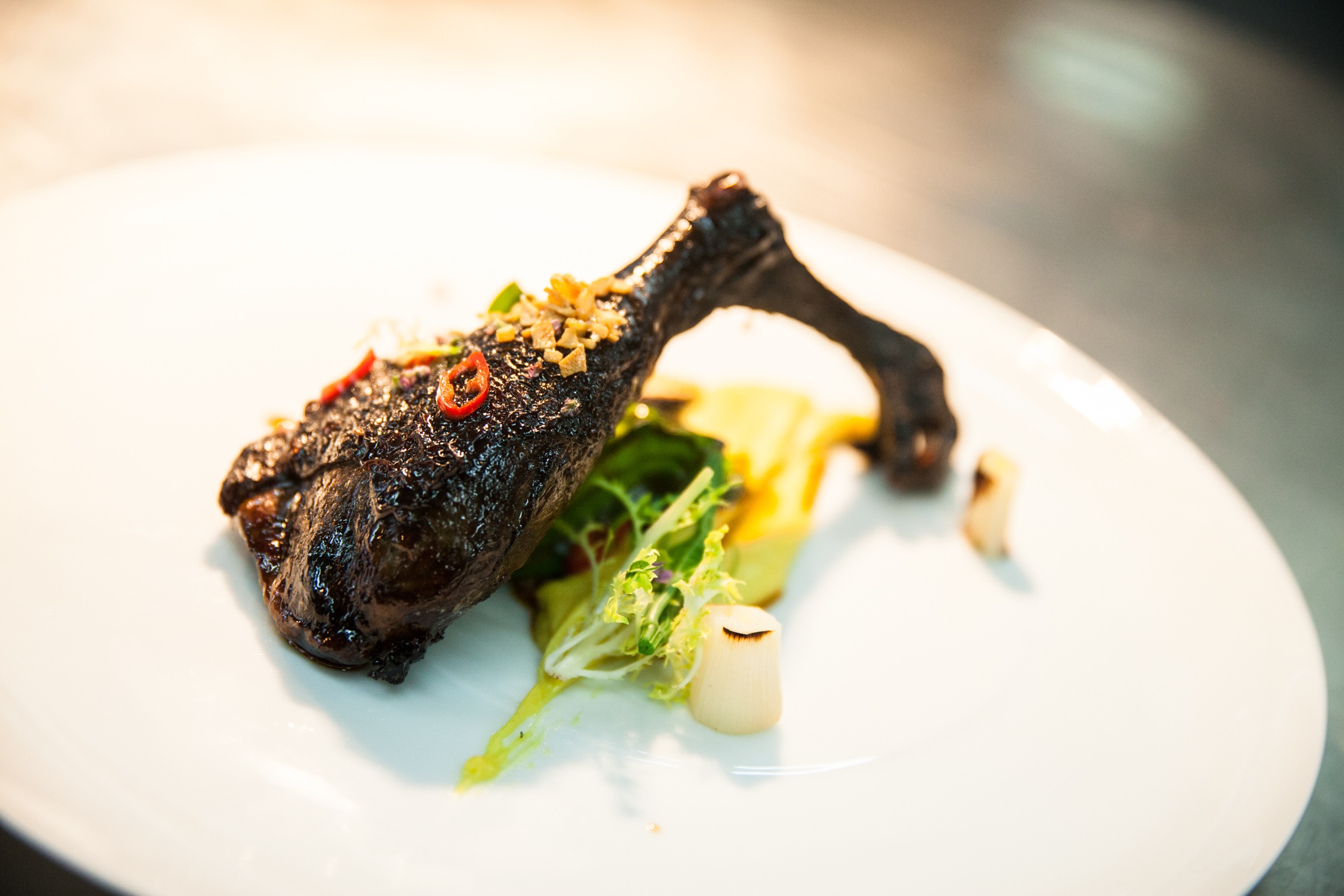 In the end, Case was honored for authenticity, Stuart for flavor and Jacquet for technique. All won first place…especially those of us who were around to eat these inspired creations after the judging.

More from our Taiwan tour on Food Republic: