It’s a Thursday night in Bordeaux’s old town, but it’s a young crowd gathering inside the glass-fronted restaurant Belle Campagne. This bi-level spot, started a year ago by two friends from catering school, has earned raves not only in the city but around the country, partially for its lively atmosphere and crowd-pleasing menu but largely because the chef-0wners, Adrian Bacquet and Manuel Dagens, source every ingredient from around the Aquitaine and other nearby regions. At a time when France is wrestling with its culinary soul, even toying with labeling restaurants that cook all their food in their own kitchen — the controversial “fait maison” (made in-house) law — a commitment to “le locavorisme” is news in itself.

Dagens joins me at the counter on the bottom floor that serves as hostess stand and bar, offering me a glass of red from Marmande, in the southwest. On the right wall hangs a Peugot bicycle; adjacent is a sizable blackboard with the day’s offerings, a charcuterie and cheese section with items sourced from the Gironde and Basque areas, and dishes such as duck hearts, fries with aioli and smoked trout. There’s also a catch of the day and a soupe du jour. So, it’s a homey menu with a few ambitious dishes thrown in.

After speaking with Dagens, I’ll ascend the stairs, walking past a giant poster that reads (in English) “Please Eat Fresh and Local,” up to a charming dining room with tiered seating. It’s soon filled with stylish twentysomethings sharing those fries — which are amongst the best I’ve ever had, crispy yet chewy and tasting like fresh potatoes — and drinking affordable wines from Bordeaux and beyond.

Dagens says that he and Bacquet, both in their early 20s and natives of the area, packed the place from the outset with friends and family. “For the first two months, it was packed,” he says in English. “After that, we had a lot of magazines [and newspapers] like Le Monde and L’Express come in and say, you’re maybe the first place in France to source 100 percent locally. So there were a lot of articles.” And as a result, a lot of new customers, some of whom, he says, struggling for the word in English, “with big wallets.”

The increased crowds, including wealthy Bordelais curious to try the new locavore restaurant, allowed Belle Campagne to stay true to its mission of offering meals to those looking for a full dining experience to those looking to share affordable “finger food,” as it’s listed in the restaurant’s tagline.

While such a designation almost seems cute, the philosophy behind the menu means that Dagens, Bacquet and their staff have to work especially hard to source ingredients and even wine. This is not a market-driven restaurant, Dagens tells me. Instead, he and Bacquet spent the lead-in to opening driving around the region and meeting with purveyors, often forced to convince them that these two fresh-faced guys were actually about to start a business. “They were skeptical. They were saying, no, it’s not possible, you’re too young.” A few came around, and they restaurant opened with about 25 meat and produce purveyors from the area. 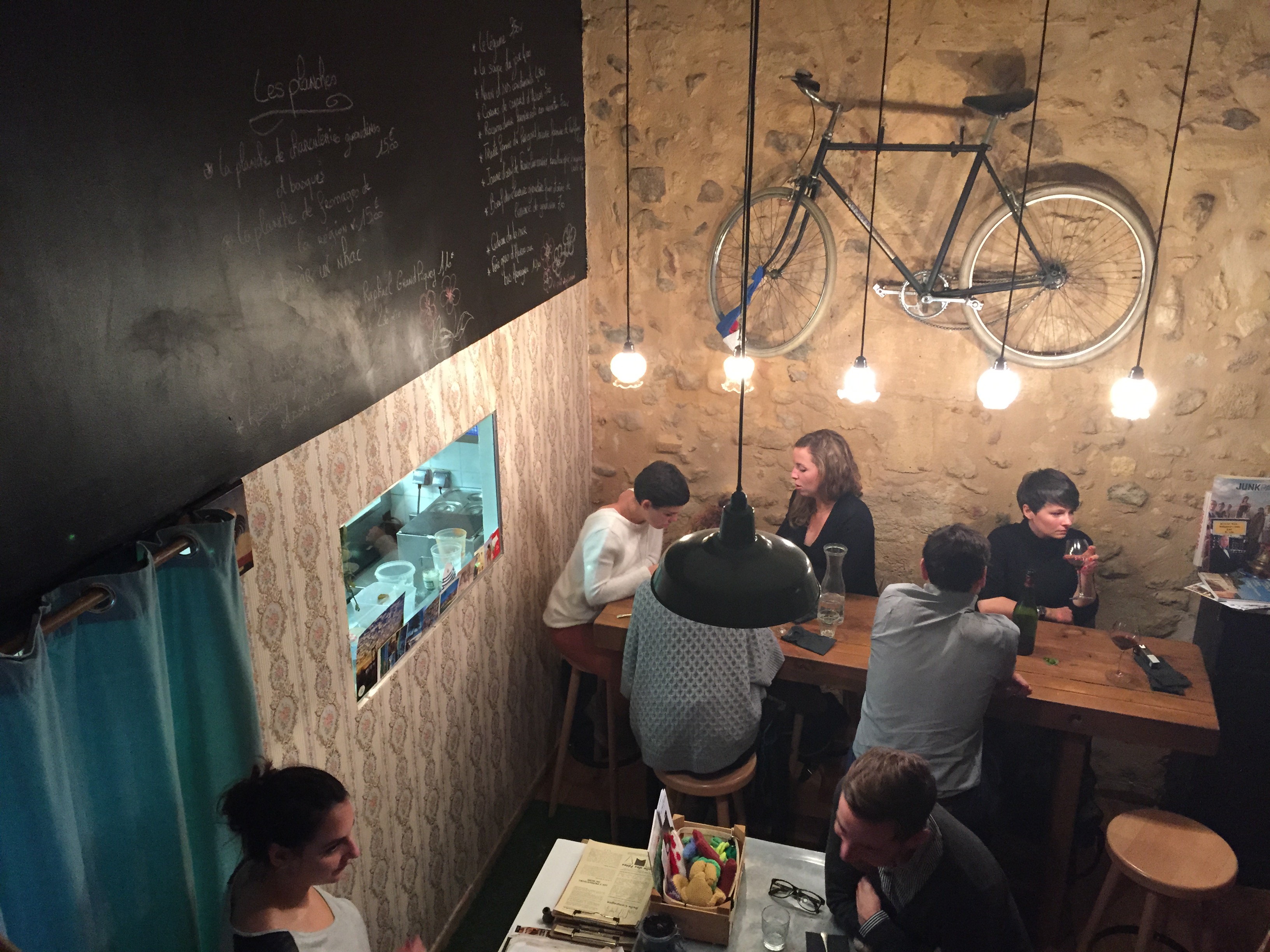 The commitment extends to the wine list, where they carry wines from well-known vineyards around Bordeaux, but also some unexpected reds and whites from the less-storied Right Bank. “We don’t only want Grand Cru. We have to carry some because people want Médoc, but we try to discover little domaines as well,” he says.

The attitude and execution would be at home in Brooklyn or the Bay Area, but for Bordeaux and France in general, Belle Campagne is unusual to say the least. Not surprisingly, Dagens tells me, the original concept was a food truck. French bureaucracy stifled that idea, so the partners moved on to create an entire restaurant. The design, not shabby but certainly not chic, is the partners’ handiwork as well. And while many items on the menu are distinctly French — Dagens and his partner credit their grandparents’ and parents’ cooking as an inspiration — they’re like many young chefs around the world who are experimenting with global inspiration in their cooking.

“We are proud to be French, of course,” Dagens replies to a line of quetsioning about respect for la gastronomie. “But we are not saying we are the best. That’s it. French cuisine, as many French people say, is not the best. Because for example, I have a friend living in Santa Barbara, she’s from Mexico, and Mexican food is amazing. Thailand is one of the best places to eat. And so I cannot say French food is the best. You have to be open-minded.”

They’re not alone, even in the neighborhood around Belle Campagne, in their thinking. The restaurant is around the corner from both Miles and Dan, two other upstarts with young, global-minded teams running the menu and wine list. Dagens suggests it’s a bit of a movement. “The dining scene in Bordeaux just keeps getting better,” he says.