“There are wine fashions, people want green wine or wine with sugar, but I make wine like I want to make wine,” Pico told us as he showed off his vinification process.

The narrow cobblestone streets of the small town of Chablis, its quiet vineyards set upon rolling hills, seem from a more aristocratic and traditional time long-past. Even the fonts on a bottle of wine made by Raveneau or Dauvissat — two of Chablis’ most esteemed producers — denote ornateness and formality. Like France’s other oldest wine-producing regions, viticulture came to Chablis with the Romans, and some estates in Chablis go back to the 15th century, when the region started shipping its wines elsewhere in Europe.

The vines, in other words, have deep roots. That’s why winemakers like Thomas Pico, Patrick Piuze and Alice and Olivier de Moor, who are working naturally and organically — and who don’t hail from established wine-making families — are so radical. Not only are the wines made at these domaines low-sulfur and organic (and organic farming can be tricky in Chablis, where a humid climate encourages pests) but they are also terroir-driven and age-worthy.

Thomas Pico’s father was born in Casablanca. He came to Chablis in 1967 and married into a family that was part of a grape-growing cooperative. At that time, Chablis was going through a stage of extensive replanting, after phylloxera, a type of aphid, destroyed many of the vineyards. Pico Senior had no experience in winemaking when he started vinifying his own blends in the 80s as a négociant [winemaker] — with grapes he bought off growers.

Pico Senior, now 61, is relinquishing the domaine to his 33-year-old son, Thomas, who is bent on sourcing only organic grapes that he grows himself, or from farmers he knows and works with intimately. Pico only started making wines in 2006, but already you can find his domaine on the lists at hip wine bars across France, as well as at wine shops that prefer small producers working naturally.

“There are wine fashions, people want green wine or wine with sugar, but I make wine like I want to make wine,” Pico told me as he showed me his vinification process when I visited the domaine in the town of Courgis, where his wines are bottled under the label of Pattes Loup. Pico’s wines are unfiltered and vinified without any added acid or yeast. He lets them ferment naturally, and uses just a little sulfur for stabilization.

Pico sees winemaking as a community endeavor. His growers aren’t anonymous; they are people he knows personally. He hosts exchange students from South Africa and people in their 20s and 30s who have had some difficulty in life and are trying their hand at winemaking to turn things around. His eyes shone as he told me about the festivities during la folie, the post-harvest party.

“My father was a négociant, and he wasn’t organic,” explained Pico — but he is determined to work closely with his growers, and organically farms a few plots of his family-owned land. Yet even though Pico doesn’t filter his wines, he still wants them to be “clean” and in that sense, they are classically styled. As the Wine Advocate reports, Pico’s wines deserve a few years in the bottle before being drunk, but even in their youth they are bright, intensely mineral and show quality fruit.

Pico is not alone in his quest to produce natural, organic wines in Chablis. Not far from Pattes Loup is the home of Alice and Olivier de Moor, whose wines can be found at places like Manhattan’s Ten Bells and on lists all over France. Neither of the de Moors came from winemaking families, although Alice did grow up nearby legendary and cultish natural winemaker Jean-Francois Ganevat in the Jura. Olivier de Moor was a photographer before venturing into winemaking; the couple learned their trade at the oenological school in Dijon. The de Moors’ wines are star-bright, and vibrant to the point where you hold your breath for a moment after taking a sip, feeling the energy in your glass.

It was, in fact, Olivier de Moor himself who made the call to Paris-based export agent Thomas Calder in 2009, urging him to visit Pico and taste his wines. Calder did so, and was impressed. But more than that, he understood that the young Pico would need a strong spokesperson.

“I visited Thomas Pico with a client from Maryland, and he wasn’t convinced,” Calder told me over the phone, “And I had to say: look, he’s just starting out, and if you don’t start with this domaine now, it will be too late.” 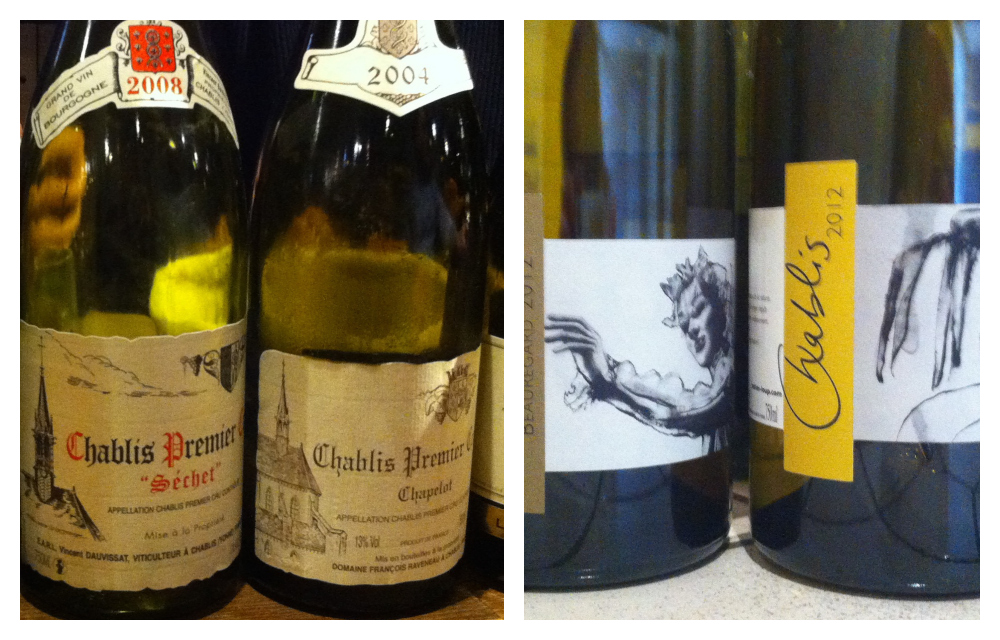 Even just looking at the labels on Pattes Loup and the De Moors’ wines, compared to the traditional fonts covering other Chablis bottles, you can tell you’re getting into something fresh, different and forward-looking.

Within two years, Pico was the darling of the natural wine world, and his table was so mobbed at industry tasting events that he elected to stop going to them at all. Calder recounted how when Pico took over farming 2.4 hectares of his father’s land in 2005, determined to do so organically, his father thought he was crazy.

“There’s less incentive to grow organically in Chablis than in the Loire, where it attracts people,” Calder explained. Chablis wine is already so well-known and considered high-quality, so growers don’t bother with the extra work presented by organic farming — tending the vines by hand, for example, as well as the risk presented by using less pesticides.

Even just looking at the labels on Pattes Loup and the De Moors’ wines, compared to the traditional fonts covering other Chablis bottles, you can tell you’re getting into something fresh, different and forward-looking. But what’s exciting about Thomas Pico, the de Moors, and another Chablisien natural winemaker, Patrick Piuze, is that their wines are unmanipulated yet display the typicity of Chablis, its signature Kimmeridgean complexity due to centuries-old deposits of oyster shells, and, at higher elevations, limestone. These vintners aren’t just making hipster wine to be drunk in Paris nightclubs; these wines are totally sincere and respectful of the region’s history and terroir.