Mobs of fashionably dressed twentysomethings huddle over excellent wines grown in vineyards just outside of town, nibbling on cutting-edge food prepped by young chefs as the latest indie rock song plays in the background. Friends roll up on bicycles or join in after a run along the riverfront. No, I’m not talking about Portland, Oregon, but Bordeaux, France, which is one of the most exciting cities in Europe right now.

The city, which is literally surrounded by the most famed wine region in the world, kind of gets lost outside France because its name is so synonymous with luxurious wines. However, since gaining recognition as a UNESCO heritage site in 2007 — yes, the entire city is a world heritage site! — and thanks in large part to mayor and former French prime minister Alain Juppé’s influence, Bordeaux is a city on the rise, with a metropolitan population over one million, several respected universities injecting talented young graduates into the community and several intriguing blockbuster civic projects on the horizon. When I visited last month, I kept finding more and more reasons to love Bordeaux, and here are 10 that might entice you to include it in your upcoming travel plans.

1. As you’d imagine, drinking wine Bordeaux is nuts
You may know some of the surrounding towns, with names like Margaux, Haut-Médoc, Graves, Sauternes, Saint-Emilion. But the youth movement in Bordeaux means that wine bars like the highly recommended Le Flac0n (43, rue de Cheverus, 33000, 33 9 81 86 43 43, facebook.com/leflaconbordeaux) also serve natural wines from the Loire, yellow wines from Jura and others. During my visit, the centrally located Bô Bar (8 Place Saint-Pierre, 33000 Bordeaux, 33 5 56 79 38 20) threw a Beaujolais Nouveau release party, offering only wines by the bottle. It was a hot mess, with food and wine bottles strewn throughout the tiny barroom and on the terrace, but the Bordelais seemed to be having a blast.

2. Young chefs are experimenting with local products, exotic flavors
Two of the hottest restaurants in Bordeaux’s bistro scene owe as much to Asia and the Middle East as they do to France. The buzzy Dan (6, rue de Cancera, 33000 Bordeaux, 33 5 40 05 76 91, danbordeaux.com) merges French and Cantonese cooking on an insanely picturesque street whose 18th century inhabitants never would have imagined a future involving langoustine wontons with foie gras. One of the toughest reservations in town is at Miles (33, rue de Cancera, 33000 Bordeaux, 33 5 56 81 18 24, restaurantmiles.com), where chefs Gil Elad (who’s Israeli) and Arnaud Lahaut (who’s Franco-Vietnamese and was raised in New Caledonia, near Australia) showcase not only what they learned cooking in Paris, but drawing off their diverse backgrounds at their tasting-menu-only hot spot. (More on Miles soon; check back on FR for an interview) Other chefs in the city draw on Martinique, Mexico and Peru with impressive results.

3. It’ll be a lot more crowded in 2016 and 2017
I’d suggest heading to Bordeaux sooner rather than later, because while the city is under-the-radar for Western travelers right now, it’ll become a focal point for international media in 2016, when the new Center for Wine and Civilization is set to open, along with the Herzog & DeMeuron–designed soccer stadium, which will host the UEFA championship shortly after its ribbon-cutting. Also in 2016 is the semi-annual Bordeaux Fête Le Vin, which draws 300,000 visitors. By 2017, a faster rail connection will mean that the trip from Paris to Bordeaux will be cut in half; a ride on the TGV will only take about two hours, and I heard from the locals that Parisians are snatching up country homes in advance of this. But for now, you’ll hear far fewer people walking the streets speaking American English here than you will in Paris.

4. The food shopping is insane
Have you ever tasted cheese that’s so delicious that your knees have buckled. This happened to me while on a walking tour of Bordeaux’s food purveyors, when I sampled a bit of Morbier at Beillevaire (8 bis rue Michel Montaigne, 33000 Bordeaux, 33 9 54 86 80 03, fromagerie-bellevaire.com). The city is known also for its luxe chocolate shops, including Chocolaterie Saunion (56 Cours Georges Clemenceau, 33000 Bordeaux, 33 5 56 48 05 75). Walk in any direction and you’re likely to find a patisserie, butcher shop, fish store or even a place specializing in caviar from the Aquitaine (Bordeaux’s region). 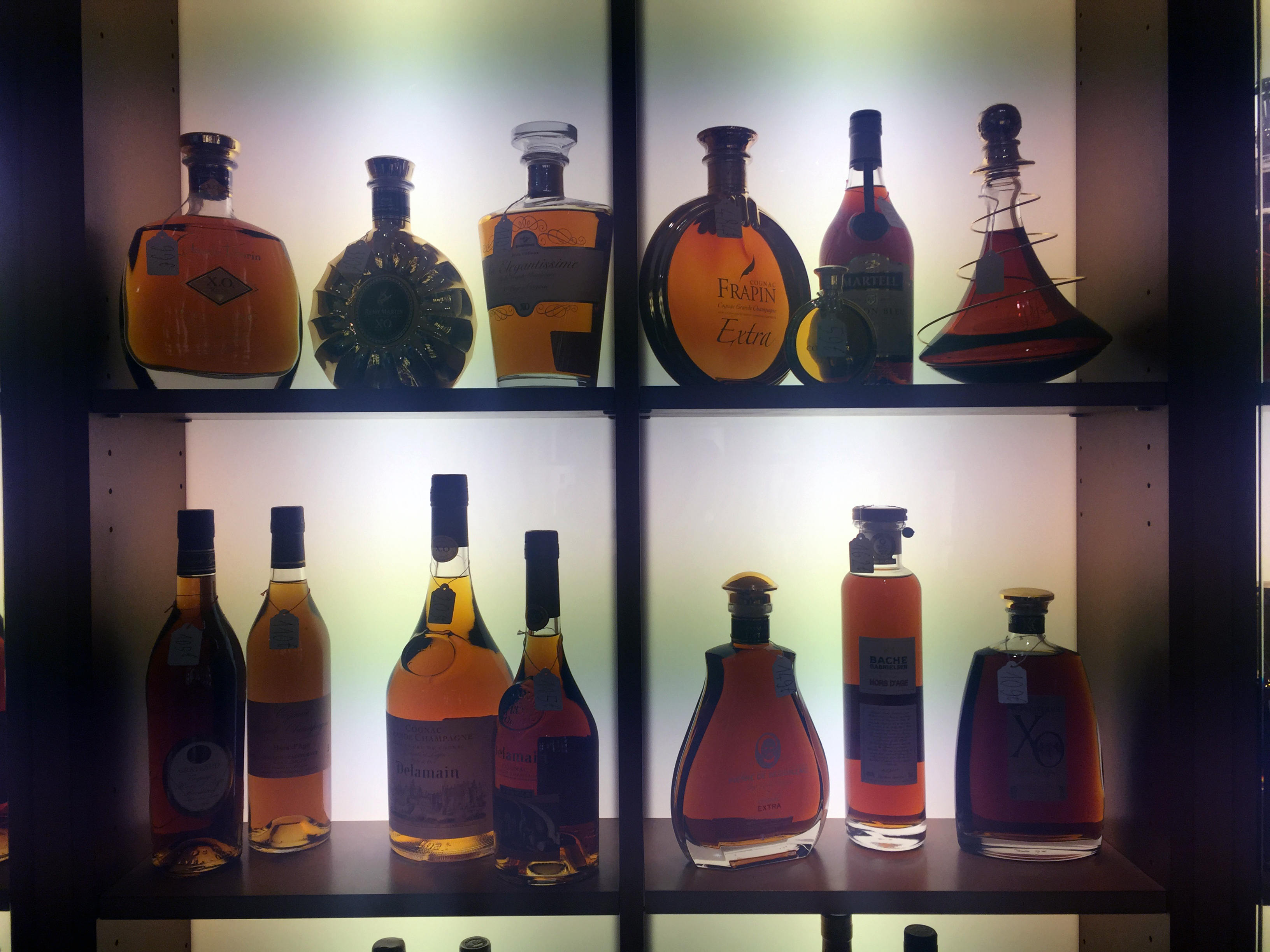 Bordeaux features an incredible array of specialty purveyors and shops, including the entrancing Cognac Only.

5. The wine and spirits shopping is also insane
I’ve already raved about the restaurant at Garopapilles, but its Cave à Vins is excellent as well, whether you’re in the market for a special bottle from Bordeaux or something more exotic. I picked up a bottle of 2012 Domaine des 3 Anes one night while stumbling back to my hotel, and it’s pretty amazing to score a $20-ish bottle of such quality on a weeknight at 11 p.m. Needless to say, wine shops in this city are on point, and that’s to say nothing of other options, like Cognac Only (18 Rue Jean Jacques Rousseau, 33000 Bordeaux, 33 5 56 48 56 10, cognac-only.com), an elegantly designed shop featuring a mind-boggling array of small-batch and exclusive Cognacs.

6. Shopping for clothes and design items ain’t bad either
Ok, maybe I was being a New York City snob, fresh off a train from Paris and not expecting to find locally designed lamps made from repurposed wood and both regional and national boutiques with urbane fashion for men and women, but Bordeaux blew me away. One of my favorite shops is Edgar (30 rue Saint-James, 33000 Bordeaux, 05 57 83 16 99, edgar-bdx.com), which features sleek design items, art books, clothes and more. Bordeaux’s main shopping street, Rue Sainte-Catherine, is one of those grand European pedestrian malls lined by enticing boutiques and even a branch of the Galeries Lafayette (11-19 rue Sainte Catherine, 33000 Bordeaux, 33 5 56 90 92 71, galerieslafayette.com). For a more intimate shopping experience, walk the charming rue Notre Dame in the up-and-coming Chartrons neighborhood.

7. For the incredibly rich art scene
As you’d expect from a university town, there’s a sizable art scene, with galleries spread throughout the city, and in particular in Chartrons. The first stop should be the stunning Center of Contemporary Visual Arts, known locally as CAPC (7 Rue Ferrere, 33000 Bordeaux, 33 5 56 00 81 50, capc-bordeaux.fr), where I recently checked out a sprawling exhibition of the work of German conceptual artist Franz Erhard Walther. 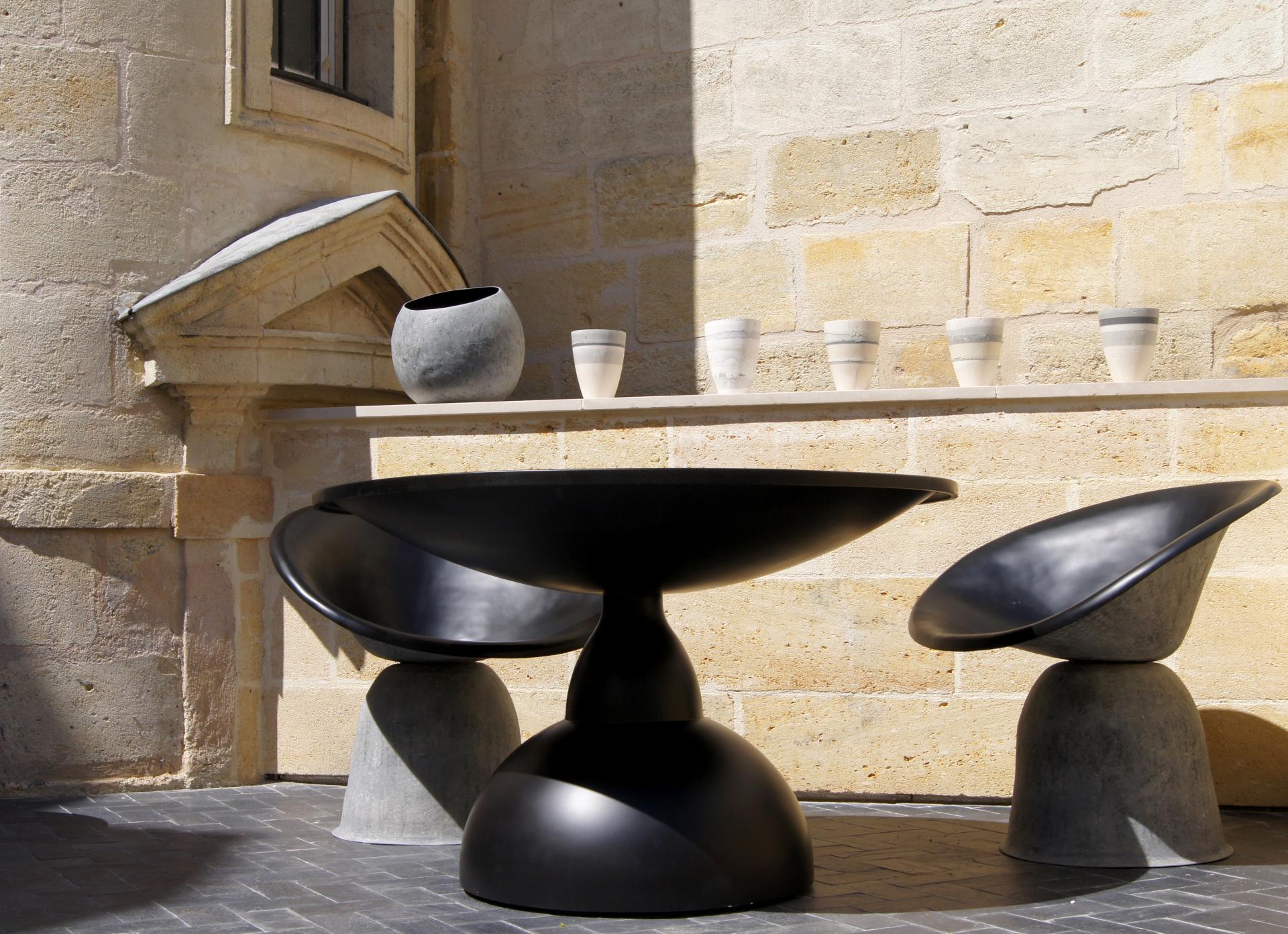 The just-opened YNDO Hotel is a 12-room haven in a former residence that features work from renowned artists and a charming courtyard.

8. There’s a hotel for every taste
Luxury-minded travelers, backpackers and design hotel denizens have a plethora of choices in Bordeaux, home to the Grand Hôtel de Bordeaux, a stunning classical structure that’s part of the Leading Hotels of the World chain, and Mama Shelter, the low-frills Paris-based chainlet known for its clever design (and affiliation with Phillipe Starck). I stayed at the just-opened YNDO Hotel (108 rue Abbé de l’Epée, 33000 Bordeaux, 33 5 56 23 88 88, yndohotelbordeaux.fr), in a former private residence where each of the 12 rooms features original art and design flourishes; one is even curated by famed Brazilian artists the Campana Brothers. Owner Agnes Guiot Du Doignon also commissioned regional artists and craftspeople to contribute to the hotel’s eclectic vibe. And she’s a trained chef, who offers a rotating menu that includes breakfasts featuring house-made jams like kumquat, sourced from a tree in the hotel’s courtyard.

9. It’s one of the most bike-friendly cities
I don’t know what you were doing on a Thursday morning in late November, but I recently found myself wearing short sleeves on a 70 degree day, riding a bike along the 4km path that runs the length of the Garonne River that divides Bordeaux between Right and Left Bank. I pedaled over a bridge to the up-and-coming Right Bank, where a few shops, restaurants and cinemas will probably lead a New York Times travel writer to call it “the next Brooklyn” sometime soon.

10. It’s the perfect jumping off point to wine country, the Atlantic coast and the Basque region
When I told a friend I was heading to the Aquitaine region, he insisted I try to make it to Cap Ferret, near the Atlantic Ocean on Arcachon Bay, about an hour from Bordeaux. I didn’t have time, but this proximity to the coast adds to the city’s allure, especially when you consider that to the south you have the famed resort town of Biarritz and then Basque country. Obviously, the city is also surrounded by vineyards, offering the opportunity to visit classic wineries in the Haut-Médoc or Margaux, or wineries that produce the affordable wines that are a big part of Bordeaux’s current marketing plans. I visited Chateau Reynon in Sauternes, where Jean-Jaques Dubourdieu had me taste through wines from his family’s estates, including many wines that are widely available in the U.S. for under $30.