Bruce and Eric Bromberg are two of New York City’s most recognized restaurateurs, launching their Blue Ribbon restaurant empire over two decades ago and having since expanded to London and Las Vegas. The brothers’ flagship SoHo restaurant — originally and still full of French influences — was instrumental in helping usher in an era of downtown, late-night dining in the city. The Brombergs have always had a close connection with France, having both attended culinary school and worked their way through the kitchens of Michelin-starred establishments all over the country. Eric wrote in to Food Republic to discuss his latest trip to France, which consisted primarily of visiting southern regions.

My brother Bruce and I have a deep appreciation for the cuisine of France. Starting from a young age, our father’s love for French cooking was something that was cultivated in us and, for our family, food was a way of integrating into the culture. All of our childhood trips were centered around food — be it dining out or cooking with the bounty collected from the day’s market visits, everything always involved food.

My father has traveled to France for the last 61 consecutive years. He has always taken great pleasure in creating wonderfully researched and detailed itineraries to lead our culinary explorations. On a Bromberg itinerary, markets were never something we happened to stumble upon while on our way to someplace else — the markets were always the main event.

Many of our trips took place in an area in the Provence-Alpes-Côte d’Azur region called Venasque. My brother and I always loved spending hours in the markets speaking to the people who held such passion for their trade, whether it was making cheese or sausages or knowing how to grow the best artichokes. Besides frequent trips to the markets, we did our fair share of dining out in Venasque as well. This is where Bruce and I visited our first professional kitchen. It was here, 40 years ago, where we first tasted shrimp provençal, which is still the inspiration for the dish on our menu at Blue Ribbon today.

When I graduated Tulane, I didn’t wait long before following my true passion: cooking. My father gave me the gift of attending culinary school at the famed Le Cordon Bleu in Paris and I lived on the Île Saint-Louis for two years, following the rigorous curriculum of culinary and pastry arts. During that time I also worked as the chefs’ assistant at the school and did a stagière at the famed one-star, Le Recamier.

During my time in culinary school, a typical day started at 6 a.m. when I would arrive at Le Recamier to prep for lunch service. Next, I would attend my classes at the school, assist the chefs with their classes, and then finally, head back to the restaurant for dinner service. After dinner, we would go out. It was this time — wandering around Paris and going out late at night — that shaped a lot of what Blue Ribbon restaurants have become today.

One of my favorite things to do in Paris is walk, and — of course — eat. Every tourist must walk along the Seine and also make their way to a restaurant in Les Halles called Au Pied de Cochon. That’s the first thing Bruce and I do when we touch down in France — head straight to Au Pied de Cochon, luggage and all! Without fail, we always order the fruits de mer and pigs’ feet. We’ve probably had everything on the menu, but those two are the staple dishes. It is open 24/7 and has not locked its doors since 1946. Au Pied de Cochon was another major inspiration when Bruce and I were creating the late night culture at Blue Ribbon.

After a meal at Pied de Cochon, our next stop is inevitably E. Dehillerin on Rue Coquillière. The owners have become old friends, and it is the best cooking supply store on the planet.

Traveling around the South Approaching the small town of Villefranche-sur-Mer by boat. A simple preparation of fish at La Mère Germaine in Villefranche-sur-Mer.

This time around, we didn’t go to Paris but instead flew straight to Nice, to celebrate our father’s 80th birthday. Bruce and I then met our dear friend chef Bruno Hess on his boat for a sail to Villefranche-sur-Mer, a little town tucked into the Mediterranean. We had a classic coastal French meal with oysters, petites fritures, soupe de poisson, a bottle of Château de Bellet made in the hills of Nice and our favorite cocktail — Campari and soda. A selection of traditional pastries at a bakery in Mazan. 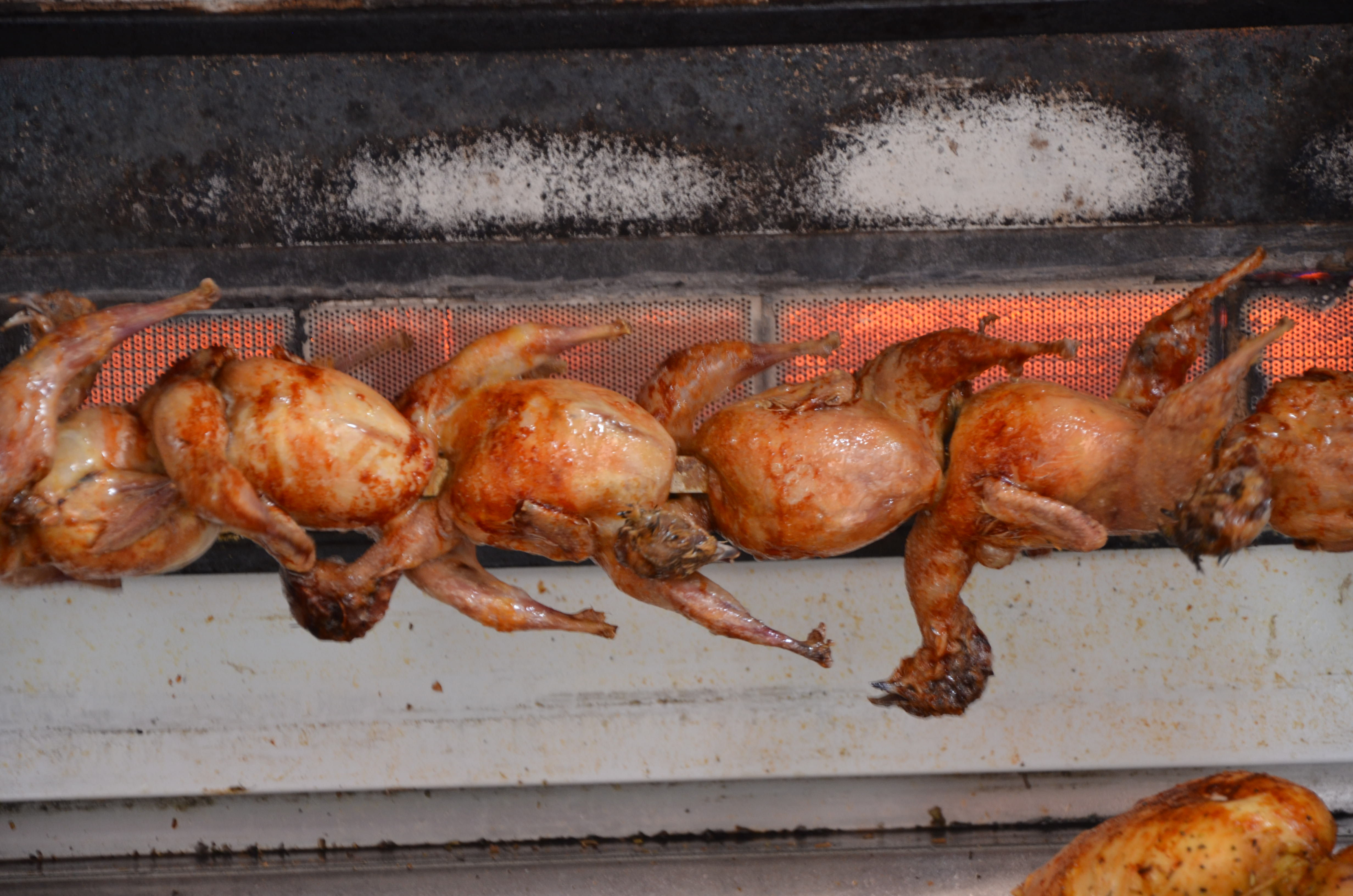 The next day we made our way to Mazan to meet our father. We checked into the Château de Mazan, a magnificent hotel in a fascinating region of France with great history and — of course — great food. Our father’s itinerary was unsurprisingly centered around markets, restaurants and some Roman ruins along the way. One market that was a highlight was Vaison-la-Romain. This market fills all of the streets in the town and is surrounded by Roman ruins. What has always excited me most about French market culture is the passion and pride the purveyors take in their work. To see the incredible presentation and meet the individual who actually makes the product is truly inspiring. I admire how produce and game is always presented whole, creating a much greater connection to the source of where the food comes from. It is such a wonderfully different experience from the United States, where food shopping has become so sanitized and sterile. 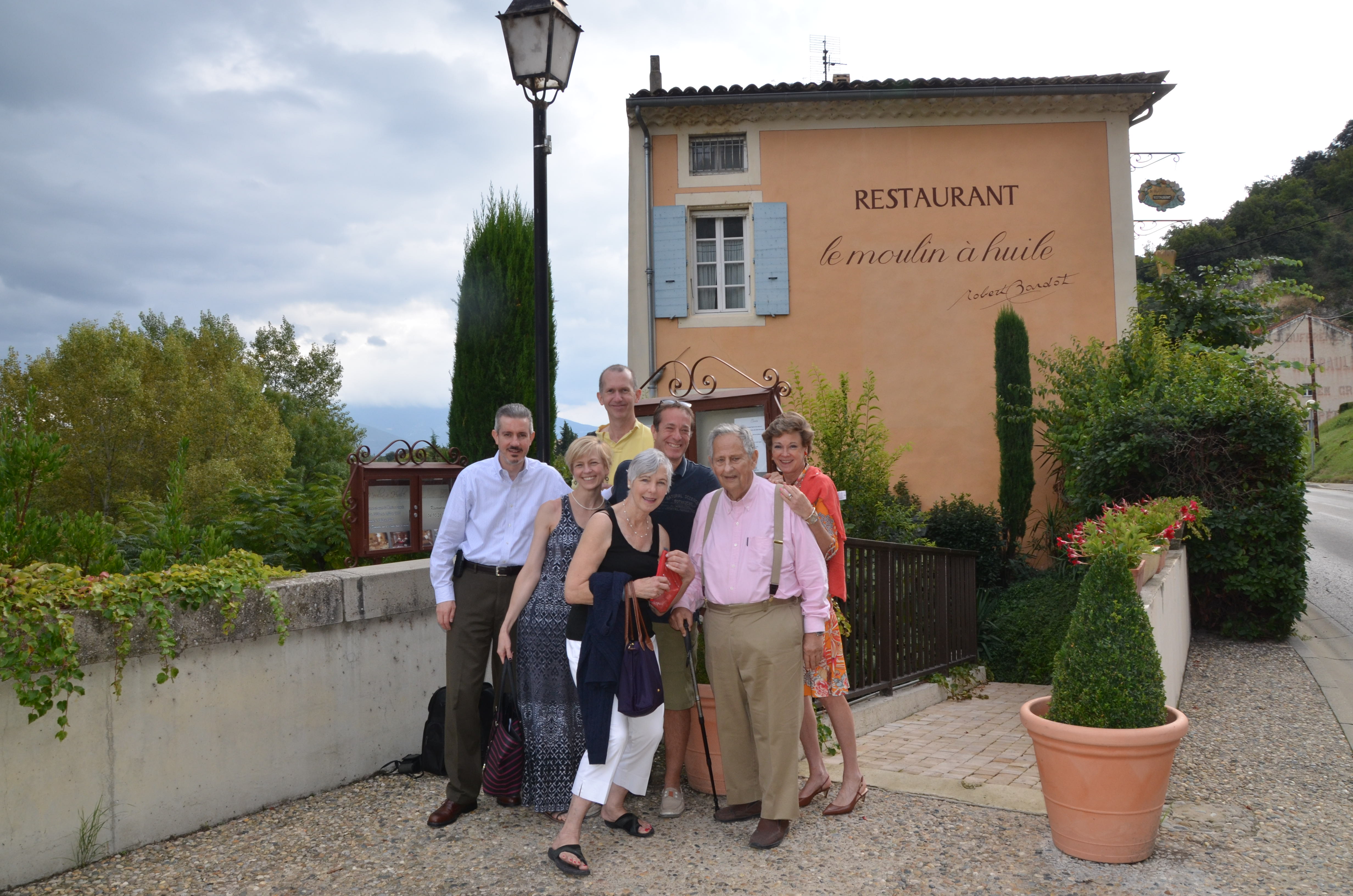 The most special meal we ate was our father’s birthday lunch at Le Moulin à Huile in Vaison. Bruce and I had been here many times before as children, and to be back with our father for the occasion was quite a thrill. Although the restaurant is usually closed on Tuesdays and the chef was competing for the Meilleur Ouvrier de France (the greatest culinary honor in France) the following morning, the restaurant opened as a special gift to my father. The lunch, which included lobster bisque and lamb saddle, was truly spectacular and heartfelt.

Another highlight was visiting the home of winemaker Marc Pichon (of Anne Pichon), with our dear friend Tom Burns of T. Edward Wines, who also happens to be the wine distributor to all Blue Ribbon Restaurants. After a delicious meal, we visited Marc’s vines to test the sugar content of the Grenache grapes. We then spent the rest of the day tasting the wines as they were fermenting.

On our last day, Bruce and I left the group in Mazan and headed to Vence. We stayed at the magnificent Château Saint-Martin, which was the perfect way to end another memorable and incredible trip to France.