The brasserie is the new gastropub. At least, that’s how it seems to be in Los Angeles, where enough French-focused spots have opened over the last year or so that you might think, justifiably, that we’ve temporarily swapped tacos for escargots. There is, for example, Cadet in Santa Monica, a new project from The Hart and the Hunter’s Kris Tominaga that channels the French countryside. Then, on December 12, Stephane Bombet and Kris Morningstar will bring Beverly Boulevard a brasserie called Terrine. Here are 10 more great places to enjoy French and French-inspired food and drinks in LA:

1. Trois Mec
Back when chef Ludo Lefebvre and partner Krissy Lefebvre were running LudoBites, scoring reservations to their limited-run pop-up dinners was about as impossible as scoring tickets to the Stanley Cup Finals. (Read our recent interview with Ludo here.) Thankfully, chef Lefebvre decided to settle down permanently with his bistronomie-inspired, set-menu-only restaurant called Trois Mec. (That’s “three dudes,” en français; Jon Shook and Vinny Dotolo, who helped open the restaurant, are les deux autres mecs.) Eating here is a ticketed event: you pick a day and a time, then prepay for your $75 five-course meal. Because the menu changes weekly, if not nightly, your experience may or may not include an absurdly decadent, and absurdly fantastic, bowl of “potato pulp,” with riced potatoes, brown butter, onion soubise, bonito and Salers cheese. Whatever you do have, you’re bound to enjoy what Lefebvre is cooking here. Just don’t ask him to change the music. 716 N. Highland Ave., Los Angeles, CA 90038, troismec.com

2. Petit Trois
Brought to you by the same trois mecs behind Trois Mec – indeed, it’s right next door to the mothership – is Petit Trois, a tiny, stools-and-counters-only bistro. Unlike its sister spot, though, reservations aren’t accepted here; rather, it’s walk-in only. This is an informality that underscores the informality of the entire restaurant. The menu is short, simple and entirely unfussy: beautiful escargot, hearty steak frites, a fantastic omelette, a Napoleon for dessert, cocktails if you want. Between the frenzy of LudoBites and the reservation system at Trois Mec, it feels a little strange to be eating at a place in the Lefebvre oeuvre that doesn’t feel like an event, but a meal at Petit Trois can be exactly that: a non-event. And, for that, we give it a standing ovation. 718 N. Highland Ave., Los Angeles, CA 90038, 323-468-8916, petittrois.com 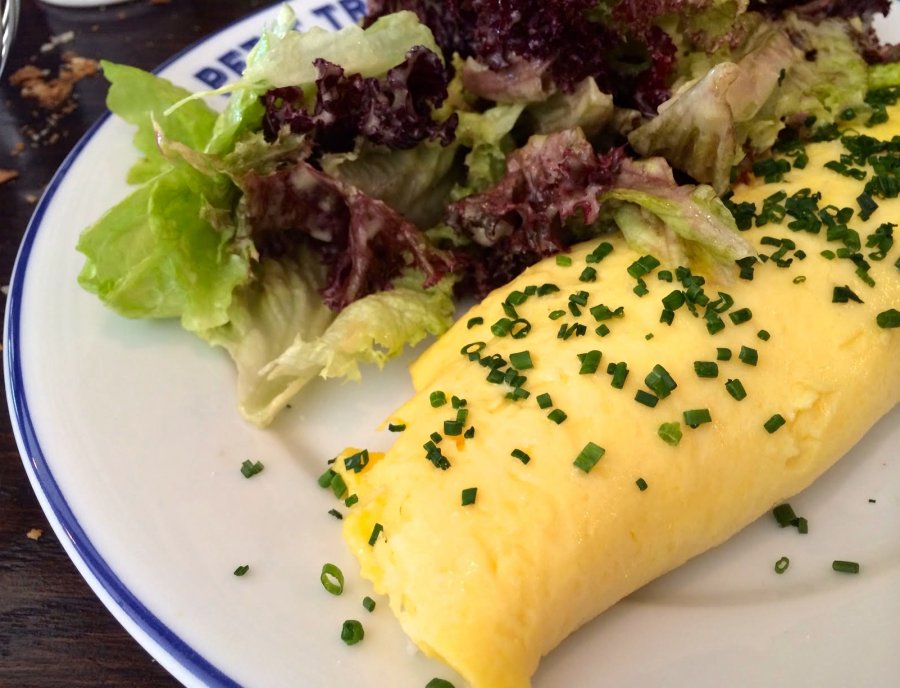 3. Republique
Walter and Margarita Manzke opened Republique last year in the building that once housed Mark Peel’s much loved Campanile and, well before that, Charlie Chaplin’s office. And while there are many things you might notice in this beautiful, storied space, perhaps the most striking element is the black-and-white photo above the bar of a young, disheveled, intense Marco Pierre White: a symbol of chefdom if there ever was one. With White as a touchstone of sorts, the Manzkes are making all sorts of terrific rustic French fare here: charcuterie boards, cheese boards, tartes a l’Alsacienne, escargots en croute. Surely, you’ll want the bread, which is freshly baked in Bongard bread ovens and easily some of the best bread in town. It comes with Normandy butter or, in a genius move, pan drippings from the wood oven. Mornings at Republique are considerably less hectic than the nights, and stopping in for a pastry and a cortado is a nice way to break from a busy weekday. Don’t forget to grab a baguette on your way out. 624 S. La Brea Ave., Los Angeles, CA 90036, 310-362-6115, republiquela.com

4. Le Comptoir
For the past few years, dinner at chef Gary Menes’s Le Comptoir pop-ups was one of the most enjoyable meals in town. As you may have guessed, these events were organized around the idea of having a meal at a counter, in front of an open kitchen, where you can watch the chef and the cooks at work. Menes recently found a permanent home for Le Comptoir at the Hotel Normandie in Koreatown, and it’s similar to what you experienced before: a small 8-seat counter, the chef at arm’s length, a multi-course set menu, with optional wine pairings and brewed coffee to finish. As before, the dishes reflect the chef’s French training as filtered through a distinctly SoCal lens: a corn vloute, maybe, or a warm salad of dragon tongue beans. Many of the vegetables are grown on Menes’s own farm in Long Beach, and he brings out the best in all of them. 3606 West 6th St., Los Angeles, CA 90005, lecomptoirla.com

5. Church & State
When Church & State opened in 2008, it was all sorts of exciting. The seasonal-themed bistro was among the first of several restaurants to open in the Arts District neighborhood near Downtown (its future neighbors: Handsome Coffee Roasters and Bestia), and it was one of the few places in town at the time where you could get a terrific bowl of moules frites. Walter Manzke was one of the restaurant’s first chefs, and he helped create a solid menu of French bistro fare. Manzke, of course, eventually moved on (to Petty Cash and Republique). Nowadays, you’ll find former Patina chef Tony Esnault in the kitchen, and under his direction, Church & State might be the most solid it’s been in years. And so, if you ended up here on a Friday night for a bowl of French onion soup and coq au vin, you would not be disappointed. The full bar provides the craft cocktails, and French bottles make up the entirety of the wine list. Bien sûr. 1850 Industrial St. #100, Los Angeles, CA 90021, 213-405-1434, churchandstatebistro.com

6. Melisse
The Michelin folks don’t deign to come to L.A. anymore, but when they did, they deemed Josiah Citrin’s Melisse worthy of two stars. And you could see why: Melisse is perhaps the epitome of Californian-French fine dining, one of the few remaining restaurants that embraces its formality even as most other restaurants in the area have traded in their ironed white tablecloths for naked industrial tables and scratchy dishtowel napkins. And so, here you have the white tablecloths, the great service, the great dishes: try the Dover sole and the “Chocolate, Chocolate, Chocolate” for dessert. Or, for the very special occasions, white truffles and caviar. Romantics should note that Melisse is close enough to the beach that you can walk there after dinner. It should get a star just for that. 1104 Wilshire Blvd., Santa Monica, CA 90401, 310-395-0881, melisse.com 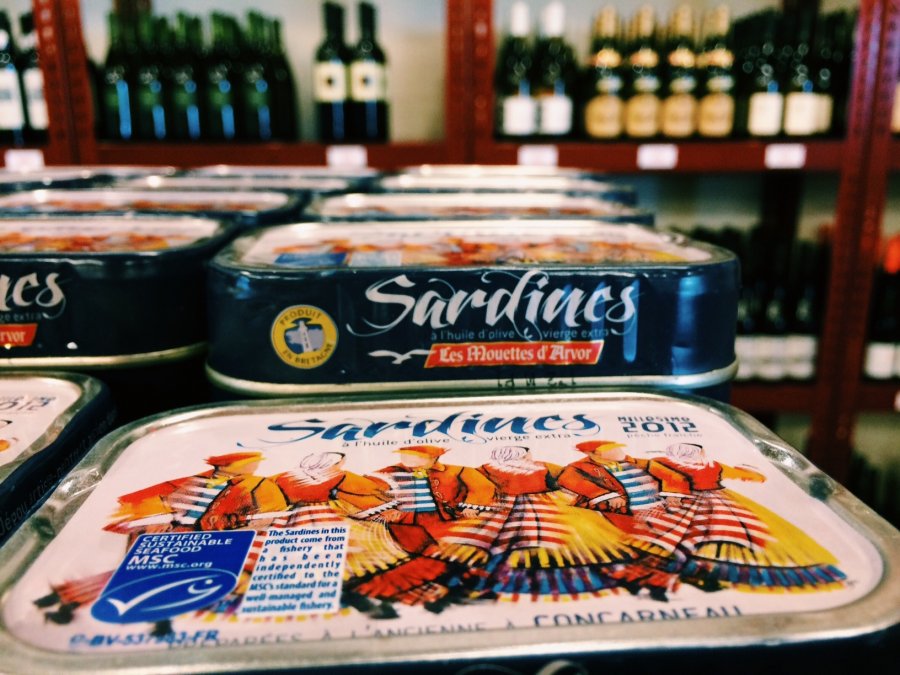 Canned sardines at Lou’s Wine Shop, a must-have for any earthquake survival kit, along with some wine, of course.

7. Maison Giraud
At Maison Giraud, a photo of none other than chef Alain Giraud himself greets you when you walk in. Which makes sense: surely Giraud has earned a place on the mantel of his own home. The Paris-born chef has been cooking refined French food in L.A. since the late 1980s. He helped open the much acclaimed, now defunct Bastide, and the list of chefs who passed through after him —  Ludo Lefebvre and Walter Manzke, among them — reads like a who’s who of French cooking in L.A. today. He then opened the lovely Anisette in Santa Monica, a brasserie that may have been a few years ahead of its time. After it closed, Maison Giraud came to be in the Pacific Palisades. Here, Giraud’s Provençal menu keeps the tony neighborhood happy from breakfast through dinner. Also keeping them (and the whole of L.A., tony or otherwise) happy: the croissants. Those come courtesy of pastry chef Noubar Yessayan, who has a bakery case full of great pastries most mornings, but whose pièce de résistance really is that beautifully flaky, unapologetically buttery croissant. 1032 Swathmore Ave., Pacific Palisades, CA 90272, 310-459-7561, maison-giraud.com

8. Canelé
Before opening Canelé, Corina Weibel cooked in the kitchens of Campanile and Lucques, and her partner Jane Choi worked at Balthazar and Pastis. Together, they created a warm, lovely, California-French restaurant, the sort of truly neighborhood place in Atwater Village where you can very comfortably pop in solo, sit at the counter with a book and order a glass of wine and the pissaladière perhaps. Or maybe something more hearty like the duck confit. Either way, the pommes Anna is a given. Brunch on the weekends brings out its more Californian side, with a custardy, inches-high French toast being the primary object of desire, and a new weekday lunch menu helmed by SQIRL alum Ria and Matt Wilson is reason enough to swing by at noon. 3219 Glendale Blvd., Los Angeles, CA 90039, 323-666-7133, canele-la.com

9. Saigon’s Bakery & Sandwiches
France colonized Vietnam in the late 19th century. And, of the many artifacts of this occupation, the bành mí might be the most recognizable. For the uninitiated, this would be a French baguette repurposed as a Vietnamese sandwich, slathered with mayo and Maggi, then stuffed with pâté, cold cuts, pickled carrots and daikon, maybe an egg and whatever else happens to be lying around in the pantry. In the San Gabriel Valley, you can’t drive a block without whizzing past at least one bành mí shop. Even so, it’s well worth Google Mapping your way to Saigon’s Bakery & Sandwiches, where the baguettes are made fresh daily and stuffed liberally. And, unlike your favorite jambon-beurre, these bành mís are severely underpriced at $2.75 each. So, you may as well toss in a few other French-inflected Vietnamese goodies, like a cup of iced coffee or the savory meat-filled pastry called pâté chaud. 718 E. Valley Blvd., San Gabriel, CA 91776, 626-288-6475

10. Lou’s Wine Shop & Tastings
“Why do we love anything or anyone in our lives?” asks wine merchant Lou Amdur, when considering the existential side of why he loves the wines he does. “Part of it is mysterious. Some people identify with Burgundy, and they’re Burgundy nuts. Some people are Bordeaux nuts. I’m a Loire Valley nut.” Thus, at his Los Feliz wine shop, Amdur’s focus includes Loire Valley wines, some obscure, some not. He also has an affinity for Beaujolais and wines from the southwest region of France. As you no doubt gathered, part of the fun here is talking to Lou about his love for French wines. He’ll also make a solid recommendation about what to bring to your holiday office party, often with a bonus history lesson, because nothing breaks the ice like how the massacre of the Cathars relates to the history of winemaking in France. While here, you might notice the stacks of Mouettes d’Arvor. These sardines are intended to age, Amdur might tell you, flipping over the tin to point out the expiration date: 2022. Something for your earthquake kit, in other words. Along with a bottle of wine. Or, several. 1911 Hillhurst Ave., Los Angeles, CA 90027, 323-305-7004, louwineshop.com