Cheese is not something you’d immediately associate with Gozo, one of the more stunning islands in the Maltese Archipelago in the Mediterranean. Popular for diving and walking, this sunny isle, located right next-door to Malta, was recently chosen by Angelina Jolie and Brad Pitt as the location for their romantic film By The Sea. The couple just finished three months of filming in the beautiful Mġarr ix-Xini bay, where they were based with the whole family.

Beyond the azure blue waters, red sand beaches, rocky coves and ancient temples, one of the highlights of any Gozo trip is the Ġbejniet, a delicious round white cheeselet made from unpasteurized sheep or goat’s milk.

Ġbejniet cheeselets are added to everything from bread to soups, stews and pizzas. They are either served fresh (like mozzarella), or dried (tal-bżar) and flavoured with crushed pepper and local tomatoes, olive oil, chili pepper or even wine. The cheeselets are a popular appetizer, drizzled with olive oil or balsamic vinegar.

So, how are they made? “Everything starts at the farm,” says Rikardu Zammit, a farmer and restaurateur who makes traditional Ġbejniet for his restaurant, Ta’ Rikardu, in the old citadel in Victoria. I meet him one morning at his cheese-making room, along a tiny narrow street inside the  thick-walled 15th-century fortress.

In the past, every family on the island would make their own Ġbejniet, drying the cheese in special wooden boxes, usually on the roof of the house. Zammit still makes it according to the traditional recipe, starting with milk from his 200 sheep and goats.

“We start early, sometimes at 3 a.m., because of the heat,” says Zammit. After milking, he goes straight to his cheese room and puts the still warm milk in a large pot, before adding rennet. Sometimes, he uses a more traditional method: adding the stomach of a baby goat or lamb to whey and then adding this to the milk. 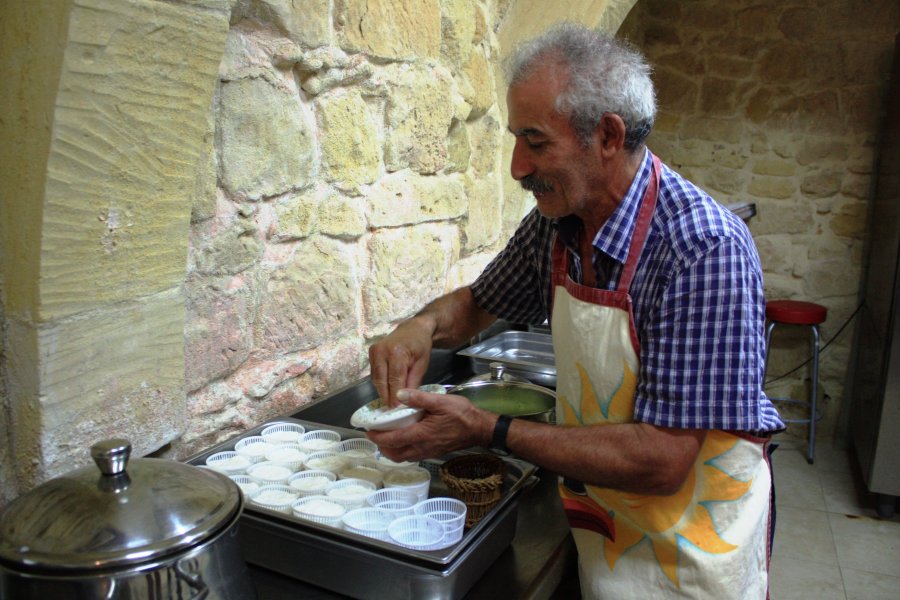 Zammit then fills small white baskets with the cheese mixture, and sprinkles salt – usually sea salt panned from the nearby Xwejni Salt Pans – on top. Once the whey drains from the baskets, the cheese forms a jello-like texture. When the mix has settled, he turns the cheese over in each basket. The bottom of the basket leaves an imprint, giving the cheeselet its traditional pattern.

To make the dried version of the cheese, Zammit sets a tray of cheeselet baskets to dry on the roof in the sun. He carries the box up four stories – a little dangerous when it’s windy, he says. “I try not to drink wine before going up!” he adds with a laugh. The boxes have a net on top, to protect from insects.

During a recent weeklong stay on Gozo, I see the cheeselets in many forms: fresh and dried, peppered and preserved. They usually come with a plate of antipasto – smoked tuna and lampuki (dorado), grilled aubergine (eggplant), olives, sun-dried tomatoes and bruschetta – a typical selection of appetizers. But, somehow the soft, creamy Ġbejniet cheeselets, the stars of the show, are always the first to disappear.

Where to eat Ġbejniet on Gozo: