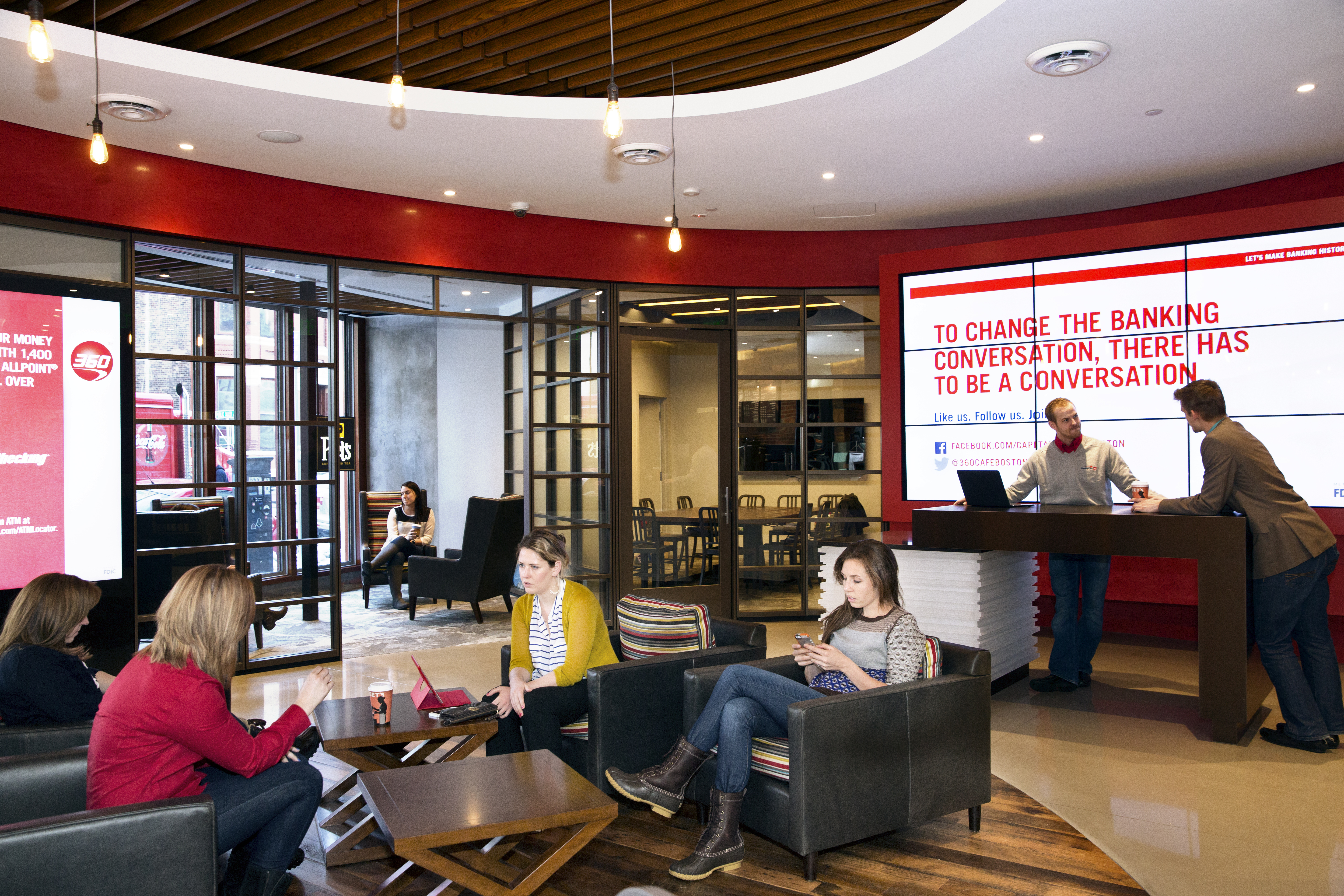 While Boston’s fine restaurant scene is strong, there are numerous alternative dining options.

Ask someone from outside the Bay State to describe Boston dining and you’ll probably get an earful of “clam chowdah” jokes. And while it’s true that Bean Town excels in pub grub and seafood, it’s also home to a number of venues that are tinkering with traditional notions of what a coffeehouse, bar or restaurant experience can entail. From bank-cafés to bookstore-bistros, the city is full of hyphenated hangouts where patrons are encouraged to kick back and pair excellent food and drink with other services. Here, we’re pleased to share five places to eat and drink in the Boston area that conduct their business a little differently.

Voltage Coffee & Art
Plenty of mocha joints fancy themselves bohemian, but few integrate fine art and service as seamlessly as Voltage Coffee & Art. In front, baristas serve coffee, tea and an assortment of small bites, including crêpes on weekends. In back, an in-house curator manages the wall space, which recently featured an exhibit of celebrity portraits by local caricature artist Aaron Dana. The business’s split personalities — half gallery, half café — converge in its self-described mission to keep patrons “awake.” Whether it’s the rotating decor or just the caffeine, Voltage certainly demands your attention. 295 Third Street, Cambridge, MA 02142, 617-714-3974, voltagecoffee.com

The Brattle Theatre
Don’t be fooled by the balcony seating — there’s nothing quaint about the way the 124-year old Brattle Theatre does business. While other upstart cinnebars struggle to assimilate gourmet treats and craft brews into their concession stands, this Harvard Square icon has something of an edge: it received its license to serve over half a century ago. Nowadays moviegoers can pair an artisanal Hammond chocolate bar with one of three Cambridge Brewing Company beers on tap, then head into the stately, single-screen theatre to catch a foreign film or Hollywood classic. 40 Brattle Street, Cambridge, MA 02138, 617-876-6837, brattlefilm.org Grab a cup of Peet’s Coffee while getting your banking questions answered at Capital One 360 Café.

Capital One 360 Café
Located just across from the Apple Store in Boston’s fashionable Back Bay neighborhood, Capital One 360® Café features free Wi-Fi, freshly brewed Peet’s Coffee® and plenty of comfy armchairs to sit back on and knock out work. But what makes this cozy café truly unique, you ask? Well, for starters, it offers 360 Checking® from Capital One®, a checking account with no fees, no minimum balances, and fee-free ATMs nationwide. In addition to providing Boylston Street shoppers a much needed place to relax and recharge, Capital One 360 Café’s friendly associates are also available to field your banking questions. At an unobtrusive counter in back, patrons can meet with bank associates, saving time and money over a great cup of Peet’s Coffee. With another storefront in Downtown Crossing (129 Tremont Street) and a new location at Coolidge Corner (1327 Beacon Street), Capital One 360 Café is putting Boston first. 799 Bolyston Street, Boston, MA 02116, 360cafeboston.com

Trident Booksellers & Café
Upon arriving in Boston in the early 80s, Gail and Bernie Flynn were taken aback by how inhospitable local businesses were to idling book-browsers. True to their hippie-entrepreneur ethos, the Flynns decided to remedy the situation themselves. Today Trident is celebrating its thirtieth anniversary as Newbury Street’s premier independent bookstore-restaurant. Two floors of neatly organized bookshelves and an award-winning magazine selection will keep even the most ravenous bibliophile occupied. Meanwhile, for those whose hunger is more bodily than academic, Trident has a robust menu that includes over a dozen hand-crafted focaccia sandwiches, frappés, smoothies, six draft beers and such toothsome curiosities as Carrot Cake Juice and Lemon Ricotta Stuffed French Toast. 338 Newbury Street, Boston, MA 02115, 617-267-8688, tridentbookscafe.com

Punter’s Pub
Because no list of places to eat and drink in Boston is complete without at least one dive. From the street, Punter’s promises little beyond the expected: cheap suds and darts. But venture inside and you’ll notice a window facing directly into an adjoining University House of Pizza (UHOP), a popular haunt for MassArt and Northeastern students. These two businesses have cultivated a harmonious (and profitable) relationship over the years, one that allows Putner’s patrons to call out pie orders from their barstools. So drop in for an $8 pitcher, wait your turn at the jukebox, and, when hunger strikes, grab a hearty slice without ever leaving the premises. Just don’t expect anyone to accept credit cards. 450 Huntington Avenue, Boston, MA 02115, 617-472-2330