Sydneysiders eat Asian all the time, at least I had been told, from weeknight stir-fries at home to quick bowls of laksa to sociable Sunday yum cha (that’s “dim sum” in American). Thanks to immigration over the years from both China and Southeast Asia, Australia’s biggest city teems with restaurants representing every corner of that continent, and Sydney’s cosmopolitan population takes full advantage of the resultingly diverse culinary scene. Couple that with coastal Australia’s bounty of seafood and the perfect produce grown in this California-like climate, and you end up with some pretty top-notch eating. Here are some of the best things I found.

Since I’m a little bit obsessed with regional Chinese cooking, I wanted to hit Spice Temple, by Sydney celeb chef Neil Perry, who was said to be mining the cuisines of China’s lesser-known provinces, like Yunnan and Guangxai. What I found was a high-end place serving excellent versions of many things I’d had before and a few I hadn’t. Hot and numbing dry Wagyu beef presented the familiar tingle of Sichuan peppercorns (better quelled with sides of pickled cabbage and cucumbers), but yellow noodles were totally new. Sure, the chewy texture was similar to that of Lanzhou hand-pulled noodles, but I hadn’t seen the addition of turmeric (a Xinjiang touch, I was told) or the square shape before. With Wagyu, Sichuan peppercorn and some chilis, this was the winning dish. During my lunchtime visit, people all around were conducting what looked like serious business lunches, and I imagine (based on the high prices and elegant setting) that in the evening it’s a fair number of special occasions. I only wish we could pull off high-end Chinese so successfully in the U.S. (but that’s another story!).

Speaking of high-end Chinese, I had a memorable meal on a different night at Mr. Wong, a stylized homage to vintage Shanghai (or thereabouts). Here’s another one that’s constantly jammed, and deservedly: Not only is it a hot spot worth dressing up for, but the dressed-up takes on staples were tasty and innovative. Roasted meats and yum cha are popular, but I can’t get the mapo tofu out of my mind: Instead of the usual cubes, it’s a base of soft, house-made tofu custard, topped with a spicy pork ragu that’s lightly sweet from the addition of house-made XO sauce. Wow. 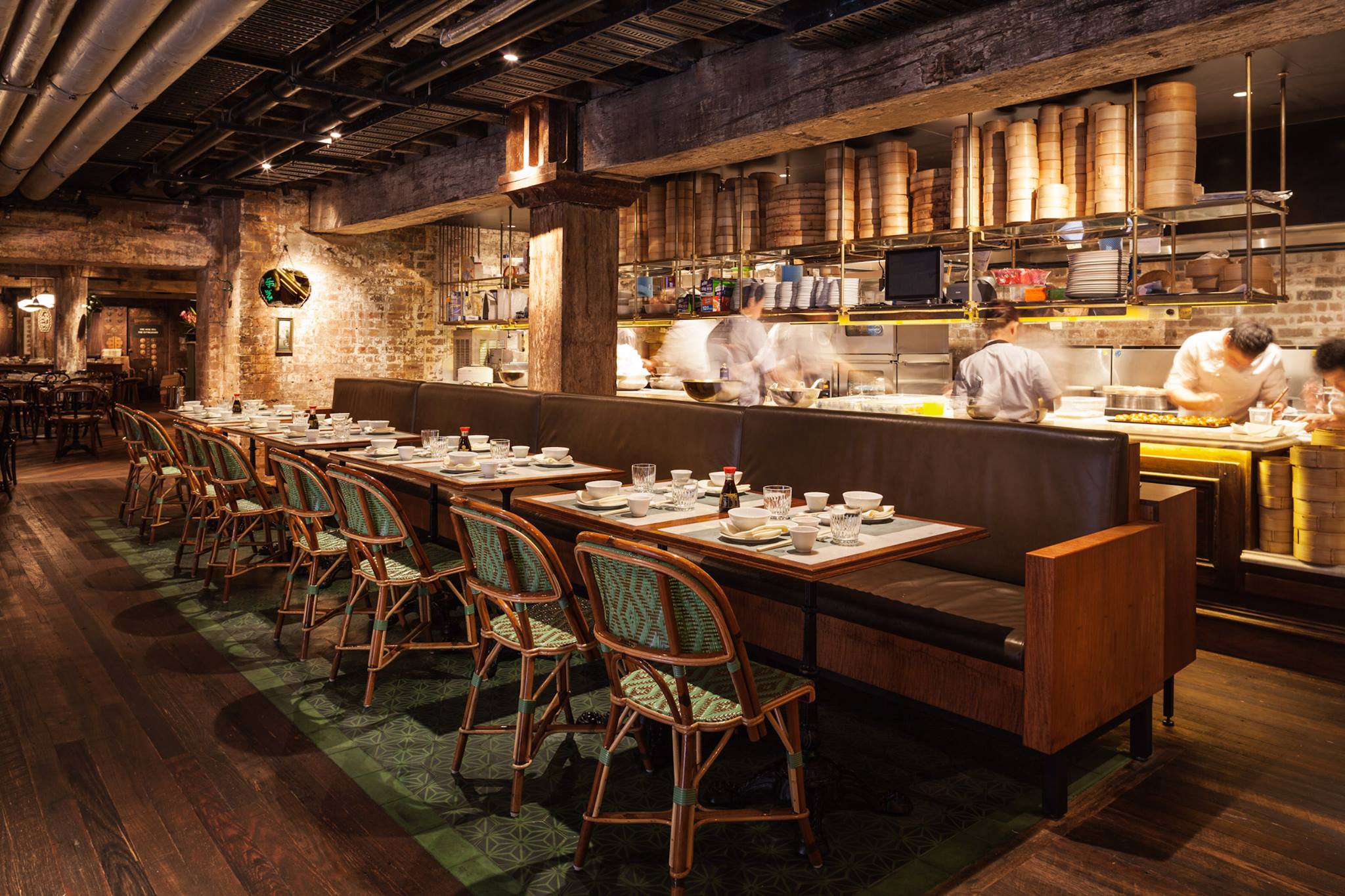 The kitchen and dining room at Mr. Wong.

Another high-end Asian option comes from a chef already familiar to Americans: David Chang, who opened Momofuku Seiobo inside the Star casino three years ago. The dining experience here is most similar to Chang’s New York tasting-menu place, Ko — though Seiobo is larger, with a U-shaped counter surrounding a kitchen where guests can watch chefs prepare the changing, 10-course tasting menu’s dishes. I loved one of my early courses, a single scallop ravioli in truffled duck broth with a scattering of chewy ramen noodles, but not every dish was as successful. While John Dory with zucchini and a puree of Poor Man’s Orange (a type of grapefuit) seemed underseasoned, as did several other courses, I immensely enjoyed an extremely flavorful chunk of short rib with asparagus and snails, and the lamb chop with kohlrabi and eggplant that came after it. However in the end, blasphemous though it may sound, I found myself longing for Changian staples like his pork buns and killer spicy rice cakes. If this is all you want, head to the bar, where a small snack menu can get you set up with cocktails and simple Asian nibbles of this kind — though try not to blanch at paying $17 AU ($15) for a pair of pork buns or 20 bucks ($18) for duck dumpling soup.

Since everyone kept raving about Chat Thai, I had to go. So I tromped down to the original “Thai Town” location, not far from Chinatown in central Sydney. The narrow brick space had three floors and a waiting list out front, but I was seated immediately as a party of one. I had a hankering for pad kee mao, aka spicy drunken noodles, so I ordered that and found it pretty ordinary. My appetizer of mhu bing, or grilled pork, was more on the money, but not mind-blowing. The girl next to me was scarfing a massaman curry she looked pretty happy with, and there were interesting rice paper-wrapped snacks available at the counter to go. If I’d had time to Thai one on, I would’ve hit up the original location of Spice I Am, on Elizabeth Street, which is known to serve excellent and affordable Isaan food, or maybe the new Surry Hills Eating House from the same owners, focused on the seafood and Malaysian-leaning dishes of Southern Thailand.

Though Sydney’s restaurant prices were causing sticker shock, after a couple of days I tracked down an (unsurprising) hotbed of cheap eats: Chinatown, specifically, the neighborhood’s shopping-mall food courts. Here is a smorgasbord a person could spend months exploring, where most meals ring in under 10 Australian dollars ($9) and almost all of them under 15 dollars ($13). Amid the dozen or so fluorescent-lit stalls at Sussex Centre‘s second-floor food court, I debated between Happy Chef (whose offal-laden No. 1 soup is an industry favorite) or Ramen Ikkyu, opened last year by a fine-dining chef defector. Ramen won out and I happily slurped into a rich bowl of paitan chicken soup laced with garlic and chili oils. Life changing? No. But it was satisfying and cheap. Perhaps I’d have been more blown away down the street at the aptly named Eating World food court inside Harbour Plaza, where Gumshara ramen has quite the reputation. (Other Eating World stalls offer every manner of Chinese specialties and some Malaysian ones too.) With wide eyes and a regrettably full stomach, I toured a few more of these upstairs and basement food courts along Dixon and Sussex Streets in the heart of Chinatown before ducking into the casual confines of Mother Chu’s Taiwanese Gourmet for some special veggie dumplings — not bad at 5 for 5 Aussie dollars ($4).

That evening, appetite renewed, I elbowed my way into the thick of Dixon Street’s Friday night market. Local Malaysian favorite Mamak, whose line down the sidewalk I’d observed at lunchtime, was selling its famous fluffy roti, a Sydney cheap-eats staple (the restaurant actually got its start at the night market, I learned), so I queued up for one of those, and then scored a sheet of fatty, melting beef jerky from another stall. If I hadn’t been gorging all day, I might’ve gone for some late-night salt-and-pepper squid at Golden Century (open till 4 a.m.), which, in lieu of windows, has bubbling fish tanks housing giant lobsters. But many other people had the same idea (as the waiting list proved) and besides, I was stuffed. 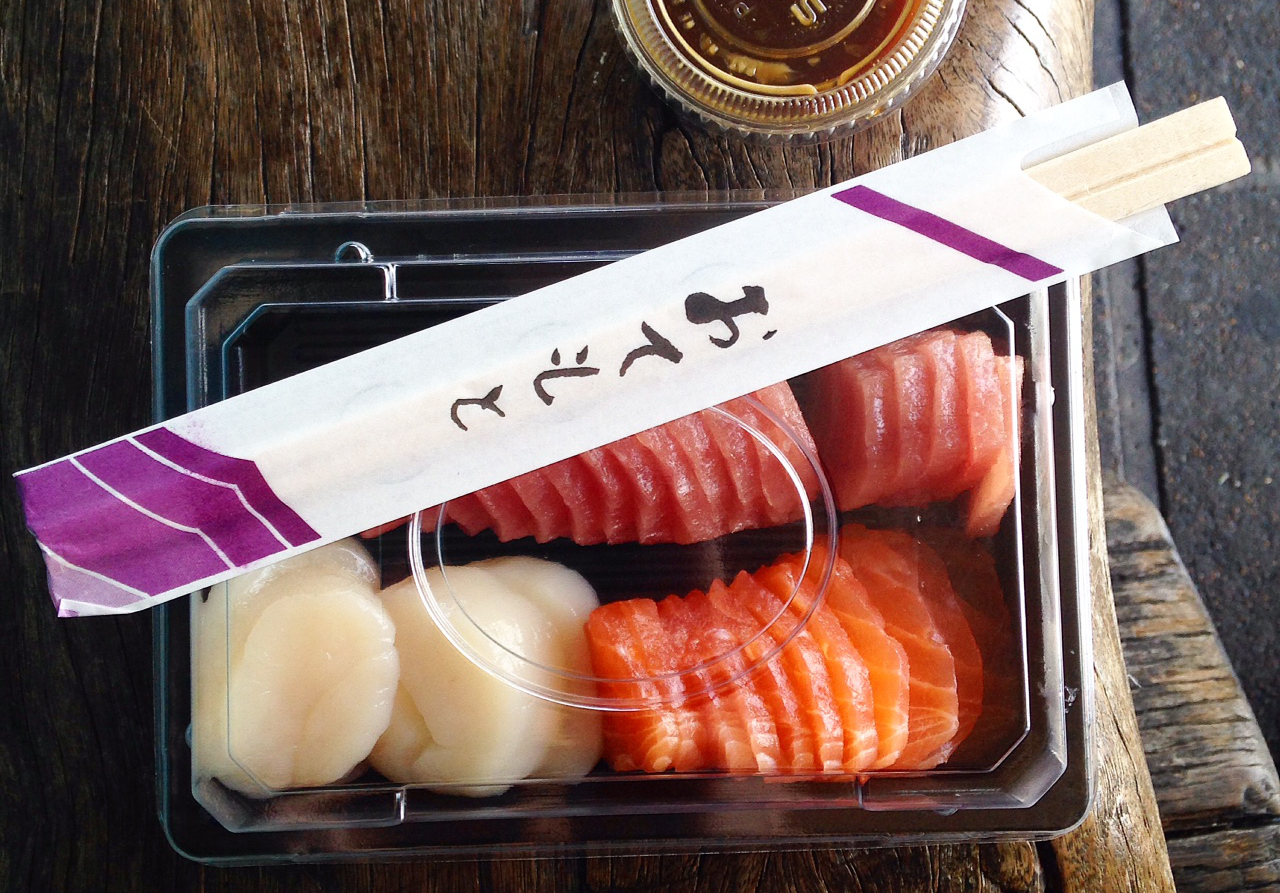 Sashimi at the Sydney Fish Market.

On my last day, I hit up the Sydney Fish Market, hoping for something light. The main building held horrifying hordes of tourists, but I’d been told to sideline over to De Costi Seafoods, away from the crowds. There, after a confusing pay-at-the-counter ordering process, I scored a full plastic box of super fresh sashimi for $13.50 Australian ($12), which I ate on the bench outside — the best meal bargain I’d encountered the whole trip. The upstairs yum cha restaurant in the main building had also come recommended, but I couldn’t stomach it as a not-too-hungry party of one.

If I’d had more time, and fellow eaters, and a car, I could’ve hit up any number of other styles of Asian cooking — from Burmese to Laotian to a restaurant called Chairman Mao specializing in Hunan Chinese cuisine. I still wish I’d made it to the reputable Vietnamese spot Red Lantern, or Moon Park, a buzzy nouveau Korean joint in the buzzy neighborhood of Redfern, but I guess you always need a reason to go back to a place. Having valiantly exceeded my sodium content for days, it was time to fly home. Now where could I pick up some dumplings on the way to the airport?

Editor’s Note: One of Sydney’s best and most beloved Asian restaurants, the sustainable seasonal Chinese spot Billy Kwong, shuttered after our October visit to relocate from its original Surry Hills location to a larger space in Potts Point. We’re hearing it should reopen in December. Check the website for updates, and do try to get there if it has reopened, for famous crispy duck and daily specials that incorporate Native Aussie ingredients, such as dumplings stuffed with spinach-like warrigal greens. In the meantime, you can find snacks from chef-owner Kylie Kwong (who’s something of a Aussie TV personality) at  Eveleigh Farmer’s Market, Saturdays from 8 a.m. to 1 p.m.; 245 Wilson St.; +61 (02) 8571 9099; eveleighmarket.com.au