Back in June, Bourgeois hinted at “some exciting new things” ahead for Blue Smoke, restaurateur Danny Meyer’s pioneering New York City barbecue spot. “Creating barbecue that’s uniquely Blue Smoke” is how he put it. At the time, Bourgeois was serving up smoky Louisiana-style andouille to attendees at the annual Big Apple Barbecue Block Party.

It seemed like a pivotal moment, both for New York barbecue, in general, and for Blue Smoke, in particular. The event, which long ago sought to expose uncultured New Yorkers to the various regional styles of barbecue from places far outside the big city, was suddenly showcasing a significant amount of barbecue made within city limits, too – a sign that great Gotham’s once-lagging barbecue scene had finally found its mojo.

And, the restaurant often credited for sparking that barbecue boom, Blue Smoke, had just experienced its first major shakeup in leadership. Longtime Meyer associate Kenny Callaghan, the former fine-dining chef-turned-pitmaster, was out as executive chef after 12 years. And, another Meyer acolyte, Bourgeois, was in – charged with bringing a new vision to a somewhat dated concept. For its entire 12-year existence, Blue Smoke had offered up a sort of pan-American assortment of various barbecue styles. That generalist approach worked fine in 2002. But, not in 2014, when so many new spots are regional specialists. As Bourgeois described it, “We’re really taking on, ‘What does it mean to do barbecue in New York?’ And, ‘What does it mean to be a Southern restaurant in New York?'”

Late last week, after months of tinkering, Bourgeois quietly debuted his fully revised dinner and lunch menus. And, it’s clear that he has bigger things in mind than just barbecue.

“Twelve years ago, we blazed the trail for barbecue here in New York, and now we want to blaze the trail for Southern food,” says Bourgeois. “I see a huge opportunity with showcasing the best of the South to New Yorkers and beyond.”

Redefining the restaurant’s mission beyond pit-smoked meats means a greater emphasis on seafood and seasonal vegetables, with recipes culled from all across the South – “from the hills of Central Texas to the coast of the Carolinas and everything below the Mason-Dixon,” Bourgeois says.

The timing of Blue Smoke’s professed Southern conversion is curious, what with the region’s continuing rise in the national culinary discussion. Newly appointed Esquire restaurant editor Josh Ozersky has referred to the South, especially the Deep South, as “the most vital area in American gastronomy.” Bourgeois offers up his own pet-theory as to why: “There is such a rich and profound history of that food and that culture and the people that make it up,” he says. “I think people gravitate toward that.” 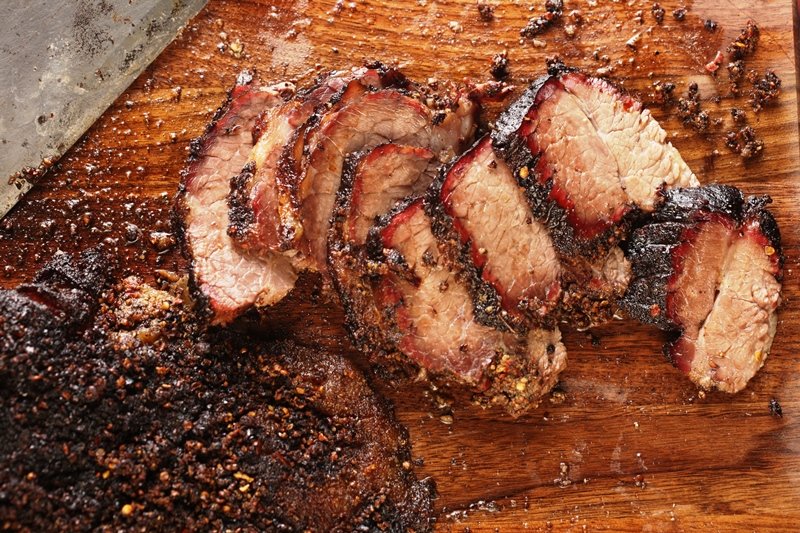 Looking over the new offerings, you’ll notice several nods to the chef’s own home state of Louisiana, of course. Take the “Pastalaya,” for instance, a regional spin on jambalaya and childhood favorite for the chef, which substitutes noodles for the traditional rice. (A similar dish appears on the menu at renowned chef John Currence’s restaurant, Bouré, in Oxford, Miss.) Bourgeois’ version includes andouille and chicken smoked in house. That’s the advantage of doing Cajun food in a barbecue place, after all.

There’s also “Coo-Bee-Yon,” a Cajun seafood stew, spelled phonetically here for the French averse, incorporating Gulf shrimp with Maryland crab. Bourgeois says the dish is “relevant to probably about three to four parishes in Southern Louisiana – and that’s the only little place, the only little nook, in the whole United States, where you find that dish.” The only place, that is, besides, now, New York City.

Bourgeois readily admits that the current menu skews heavily toward Cajun country. “That’s where I’m from, and that’s what I know best,” he says. But, he’s planning to do other uniquely regional specialties from elsewhere. He specifically mentions fatback and collard green sandwiches, a tribal delicacy in parts of North Carolina, which he picked up during the recent Southern Foodways Alliance conference in Mississippi.

Of course, no “Southern” menu is complete without fried chicken. And, Bourgeois says he paid strict attention to improving upon on the venue’s old bird, making it “extra crispy” and a bigger serving size: one half-chicken per each basket. “I resisted the whole chicken and waffles thing,” he says, opting to go with buttery, honey-baked biscuits instead. “To me, that’s more Southern.” Each basket also comes with a vessel of Steen’s cane syrup, a Louisiana product rarely seen so far north, which you can pour over the crunchy poultry as you see fit.

That’s not to say that Blue Smoke is abandoning its legendarily pricey barbecue pits. Far from it. “We feel really good about the barbecue,” Bourgeois says. “We think we do it better than we’ve ever done it, as a matter of fact.” New items “from the pit” include a pastrami-spiced short rib topped with a sort of “meat vinaigrette” that the chef calls “riblikker,” made from meat drippings, and a brisket rubbed with seven different kinds of pepper (white, black, green, pink, szechuan, allepo and chili flake). Bourgeois points to the short rib, especially, as an example of the sort of genre-defying that defines his vision of the new Blue Smoke. “That’s not your typical barbecue thing,” he says. “That’s just awesome smoked meat.” Bourgeois says barbecue will always be a part of Southern cuisine and a part of the revamped Blue Smoke, as well.

Of all his new dishes, Bourgeois refers to the “preservation plate,” featuring house-made duck ham, beef jerky and headcheese rillettes, among other things, as perhaps the best embodiment of Southern-style storytelling through food. “It’s celebrating preservation methods used for centuries,” he says. “It’s ham-making, it’s drying, it’s encapsulating in fat, it’s making pickles, it’s fruit preserves – it’s even got a pickled egg on there.”

Bourgeois describes his expanded vision for the restaurant as a result of being both “a little disappointed and very opportunistic” about how Southern cuisine is presently represented in New York. “Being here for five years, I’ve tried every Southern restaurant I could to try to find some resemblance of home, some resemblance of where I’m from,” he says. “And, it took me being hired here [at Blue Smoke] to feel home as a chef, to feel like I had a belonging here in New York. So, I am charged, mostly through myself, to lead the way on what Southern food really is and how it should be represented.”