There’s no food enthusiast on earth who doesn’t go weak at the knees for a steaming bowl of Asian noodles. Ramen spots around the world boast enormous lines of devoted slurpers looking for the next great fix. But there’s nothing new about ramen, in fact some say the ramen boom in Japan is over. Over! Enter: KOA, the newest restaurant from the culinary team behind the world-famous Benihana chain.

Not that we don’t love when a hibachi chef makes a beating heart of fried rice by slipping his spatula under it and pulsing, but New Yorkers only ever demand what’s new. With Iron Chef Yuji Wakiya at the kitchen helm, along with Benihana partner Keiko Ono Aoki (wife of late Benihana founder Rocky Aoki) and “Hamptons Sushi Prince” Tora Matsuoka, owner of Sen Restaurants, sorba was invented, with a twist that’s distinctly Japanese (and healthier than a fried pork cutlet).

I sat down for this awesome brand-new noodle dish (brand-newdles?) with Matsuoka at the newly designed space in New York’s Flatiron District, witnessed rapper Flavor Flav grab a piece of spicy Hehe-A-He chicken from a table of ecstatic blondes, and left with a craving for premium soy milk I doubt I’ll ever be able to satisfy.

Is sorba based on any existing Japanese dish?
It’s brand-new in many ways. KOA as a concept came from Yuji Wakiya, Iron Chef of Japan, whose specialty is Chinese food. In Japan, he’s the master of neo-Chinese food, so I’d call KOA a modern Chinese restaurant with strong Japanese influences. Sorba, although unique as a restaurant dish, has heavy Chinese and Japanese influences, both in ingredients and technique. Because most people are familiar with ramen, a soup dish with noodles, I’d say sorba is more of a noodle dish with soup. All the ingredients for ramen are already submerged in the soup. We serve sorba in a much larger more shallow dish, so there’s a significant increase in the amount of noodles and toppings so that kind of protrude out of the soup.

What’s your relationship with noodles in general?
As a person of Japanese descent, I’m somehow a Jewish kid from New York who happened to grow up in Tokyo, so I see Asian cuisine from all sides. My relationship with ramen is that I love it — whether I’m in Tokyo or here, I love going out for noodles. My experience with sorba has been completely unique, it lets me experience everything I love about noodle dishes, including very uncommon ingredients. Specifically, here at KOA we specialize in broth made with Ko Cream soy milk, a very new very expensive ultra-premium handcrafted soy milk.

Ultra-premium handcrafted soy milk?
It’s actually proprietary to KOA because nobody else is crazy enough to fly in soy milk from Japan. It comes from a specific producer who actually patents it. Their process yields this very rich, full-bodied almost voluptous soy milk that retains a significant amount of protein and flavor. I know this for a fact, because we tasted six soy milks, the most expensive we could find, and when you taste them they taste like white water next to the good stuff. Chef Wakiya was really disappointed with all the samples, so we decided to import this very unique product that only just came out in Japan. I thought it would be impossible — we’d have to find a distributor and importer, and Chef said “No, you have to figure it out, no matter what it costs, we’re going to create this concept and it has to be done well.” After much research, we found one of our Japanese specialty purveyors was willing to import the product for us. They’re definitely properly compensated for it, and now we’re the only ones importing it to the States. 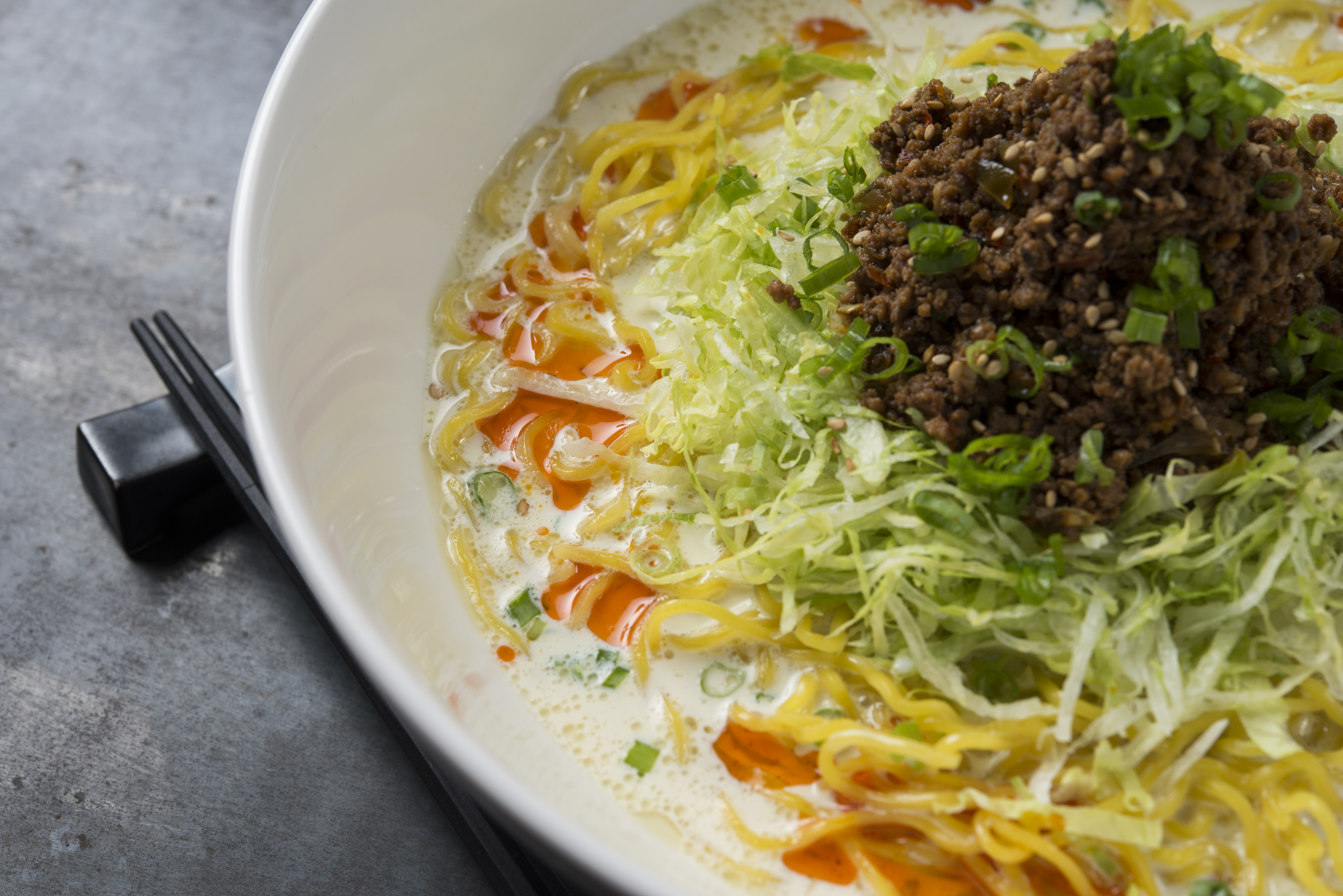 Tell me about the interior design of the restaurant? Whose idea were the rope noodles?
Keiko’s title is producer, and that’s very much what she is. She personally selected me and each one of the chefs, she touches everything that happens in the restaurant .Nothing happens without her approval, spin or improvment. She works with a Japanese design firm based in Hawaii called Wonderlust Plus, to design KOA and improve her other Benihanas throughout Asia and the Middle East. It was their original idea to utilize elements of the menu in the overall design. They wanted to create a more intimate feeling in the front room without having to lower the ceilings — 14 feet can be cavernous. Instead of dropping the ceiling, they create a false ceiling by utilizing the ropes to ignite the theme of noodles. 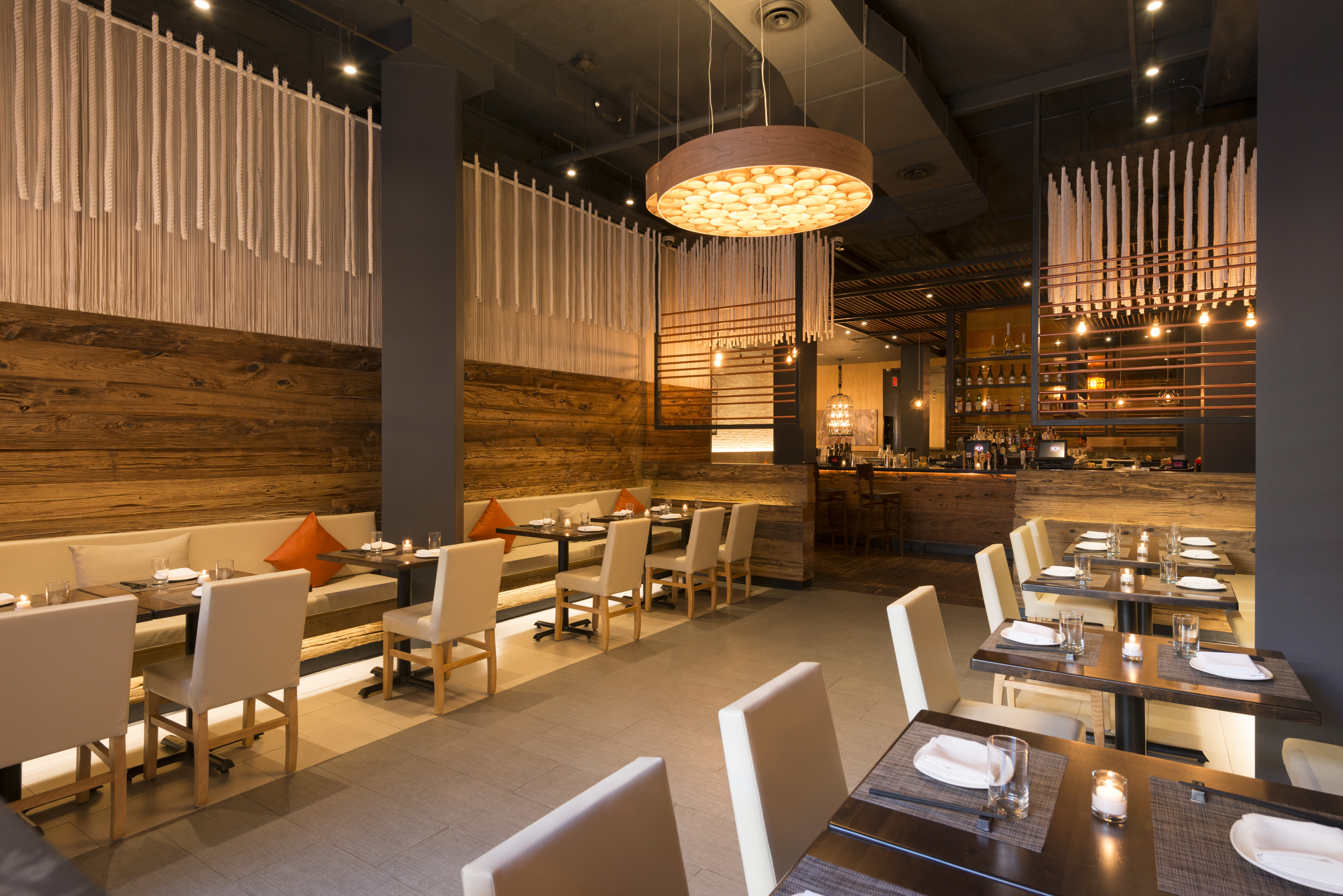 Check out the noodle theme in the dining room — thick and thin ropes hang down from the ceiling.

Say I can’t take down a huge bowl of sorba in the middle of the day. What should I get for lunch?
We have a great lunch, Iron Chef Japan-style. Chef Wakiya’s restaurants are very expensive, dinner starts around $300 per person, but he always has a very affordable lunch option and we wanted to do the same thing in New York. People are busy and need a quick lunch that’s delicious and affordable, so lunch sets start at $12, people are happy and lunch is growing at a faster pace than dinner. We see the same faces in and out every day. You’re getting the Iron Chef experience and very high-quality ingredients, which is the standard we always try to set.

What’s the deal with Flav? He waltzed in like he owns the place.
It’s so funny, KOA has attracted a lot of rappers for some reason. I don’t know what it is about the neighborhood or space but we had Lil Jon came in, too, rappers just show up. Flavor Flav came for dinner because he loves Benihana and knew one of the managers here who used to be at Benihana, so he came back a couple of times after his initial visit. He loves Keiko and it was a very funny experience, obviously taking selfies with some of our guests.