It would be difficult to spend time in the jungle for just about anyone in this day and age. Well, after your phone battery ran out, anyway. But some folks are happily living deep in the Taiwanese wilderness and they’re really, really good cooks. There’s no electricity or gas, which is fine when you have fire and natural materials like bamboo, banana leaves and rocks. It’s exactly where Taiwanese Aboriginal people have lived for the past hundred years. Luckily, most of them still practice skills to utilize the tools for making delicious traditional Aboriginal-style dishes — preparing a 10-dish feast for 20 people is no problem for the Amis, one of the country’s sixteen Aborigines tribes. Three North American chefs trekked way into the jungle to see how they cook delicious large-format feasts that last well into the night.

First — and the visiting chefs were not actually involved with this — hunt and kill a wild boar (which typically takes two to three skilled and fearless people), bag a few chickens, hoist up some fish and harvest corn, sweet potatoes, wild spinach, okra, eggplant and betel leaves. Second, make a really, really hot fire with nothing but a machete, because again: no lighters or matches in the jungle. One Ami man used his ornate, carved knife to shave fluffy strands of bamboo from a large stalk, then twisted the flattened end of a stick into the little tinder nest until it burst into flames. The knives of the Amis are very important to their culture, we were told if a man comes home to find his knives outside the door, he’s been divorced. The firemaker wouldn’t be in any danger of that, although he nicked his leg pretty badly while paring the bamboo shreds. Without skipping a beat, he grabbed leaves from a nearby plant, chewed them briefly and tied the wad of chewed leaves onto the cut with a strip of thick grass. The bleeding stopped immediately. And yes, firemaking took a lot longer than turning on the stove, but fire is fire when it comes to cooking, which we continued to discover in no uncertain terms.

While the coal pit heated up, the chefs learned an admittedly difficult technique for wrapping vegetables and whole chickens in tight banana leaf parcels. Did I say difficult? I mean the Amis chefs took over after a few tries. You never realize how unlike aluminum foil banana leaves are until you’re a stone’s throw from civilization (but still want that crispy, golden skin on your chicken). The bundles disappeared as the men buried them under layers of dirt, rocks, bamboo and, finally, banana leaves for an hour or so to cook. A tip from the pitmasters: If you see any puffs of smoke escaping from the “oven,” just lay a heavy rock over the seam in the banana leaf. 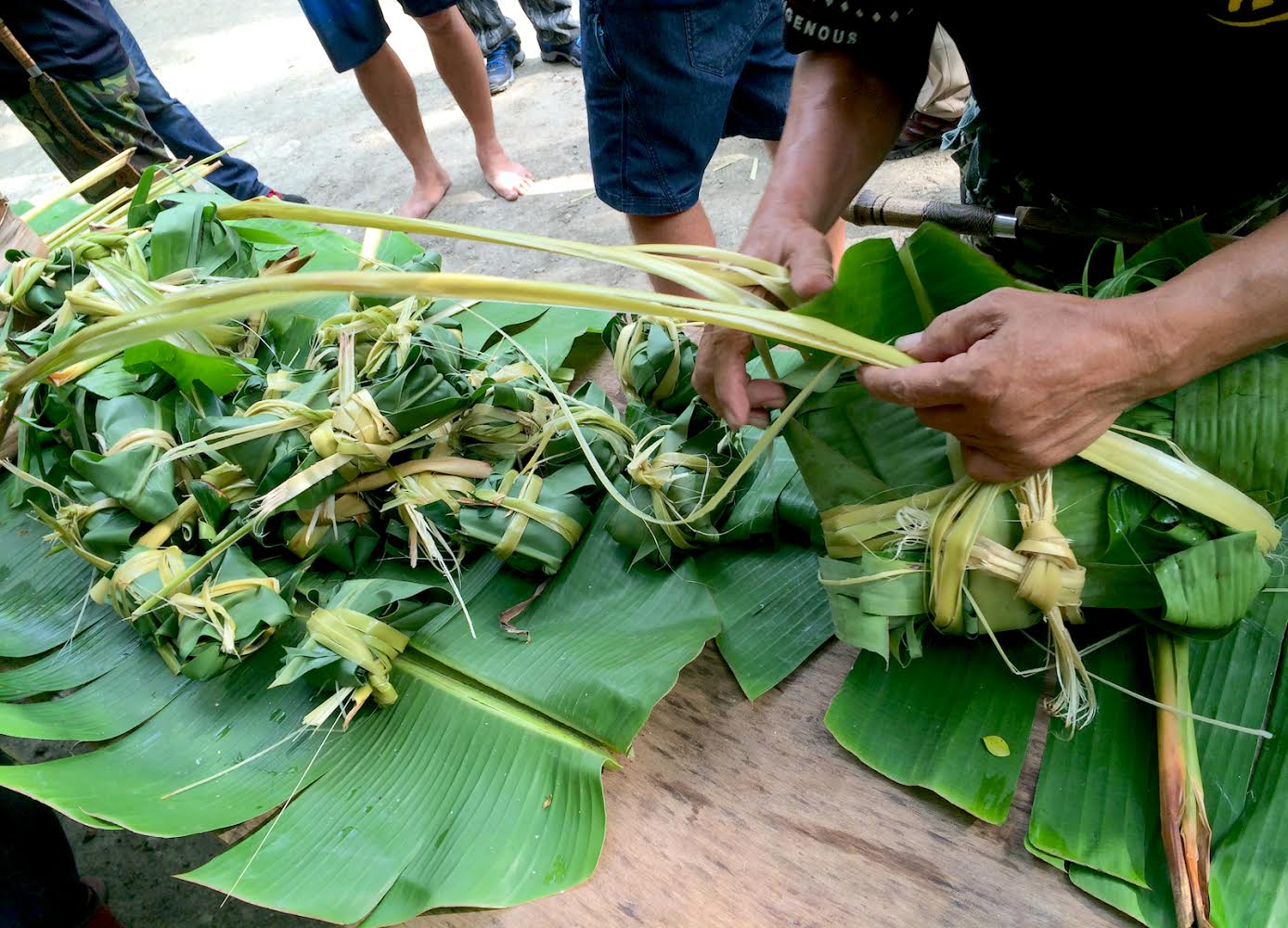 Now, about those stones. After heating up in the fire pit to, no joke, a thousand degrees, the stones, placed in an impossibly sturdy dried banana leaf bowl, makes hot water boil when poured over them. A light, quick soup of fragrant, astringent betel leaves and nettles is medicinal, hydrating and, while boiling, keeps some of the bugs at bay. 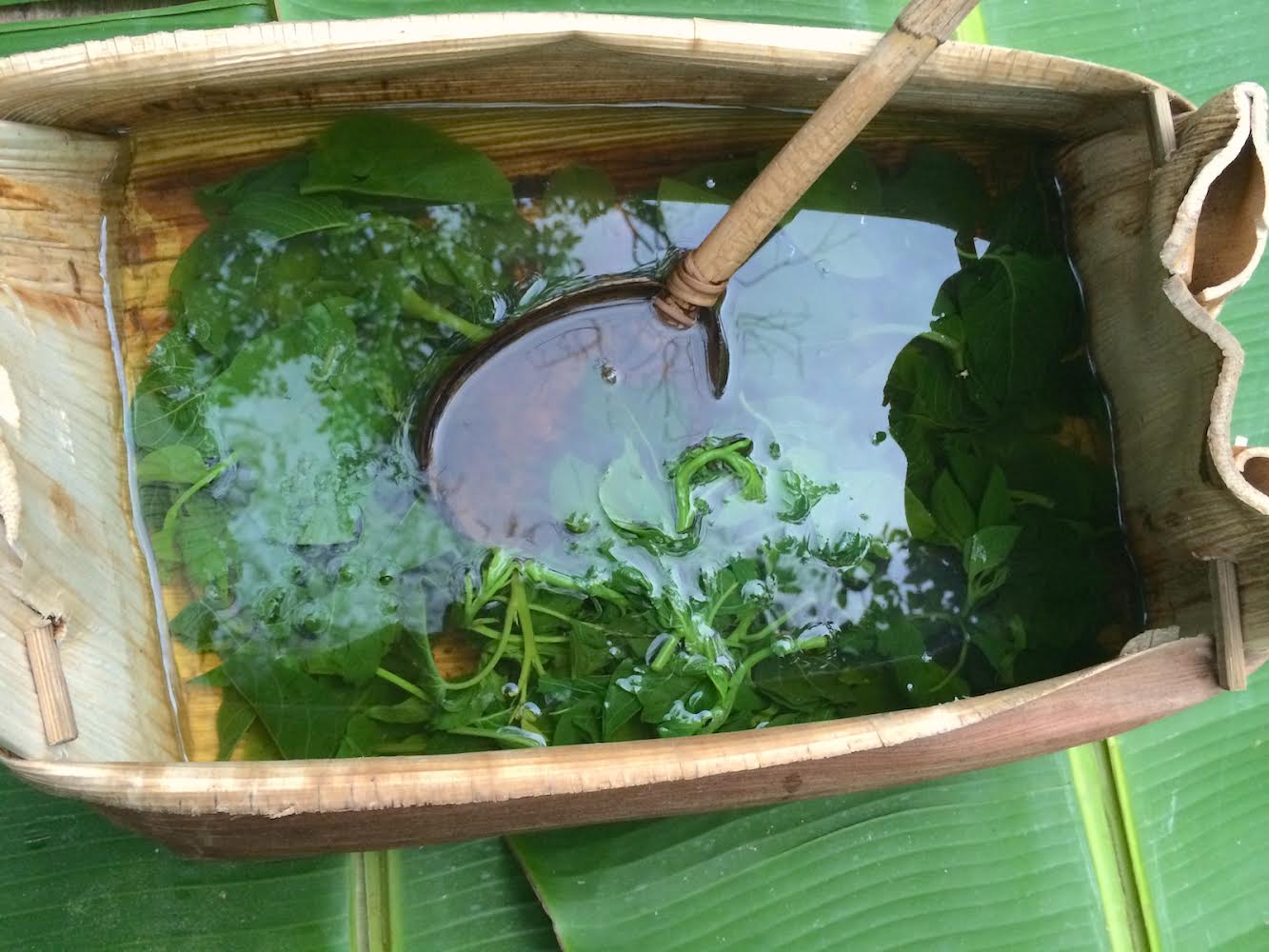 “I’m definitely using this technique back at my restaurant,” said Jared Case, executive chef at Chicago’s Park Grill at Millennium Park. “Really, just heat a rock up on the stove, put it in a stoneware pot with ingredients, pour in stock and you’ve got an awesome tableside presentation.”

The rest of the stones were used for whole fish, simply coated with coarse salt and laid on the thousand-degree surface over the fire. And the boar? That’s easy. Butcher with those beautiful sharp knives, sharpen some bamboo sticks, thread the meat through, place over a smoky fire and admire. The food cooked while the chefs tried their hands at making their own cooking fires…but the important thing was the tribe members could make them. 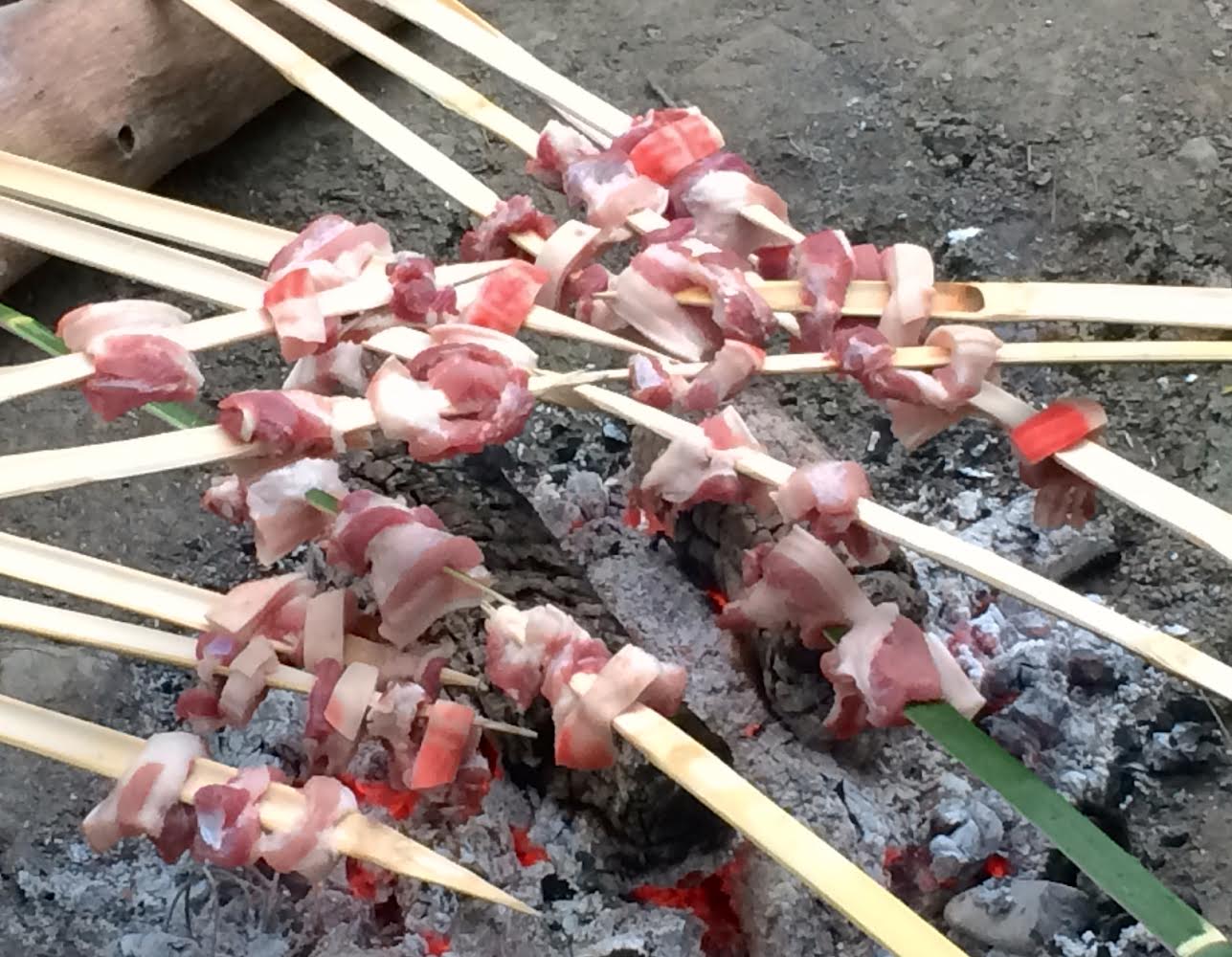 Powerful squeaks issued from the fire as earthy steam escaped from the buried bundles. The chefs dug them out using bamboo shovels and tongs (neither of which conduct heat). As the sun set and the jungle became pitch-black, we sat down to a meal of entirely locally harvested and cooked jungle fare: steamed bamboo shoot salad, wild sticky rice steamed in a wooden bowl, spinach, eggplant and okra, wild boar skewers lacquered with home-brewed black bean soy sauce, betel leaf soup, roasted chicken, yams and corn and salt-grilled fish, all eaten out of hollowed coconut bowls. 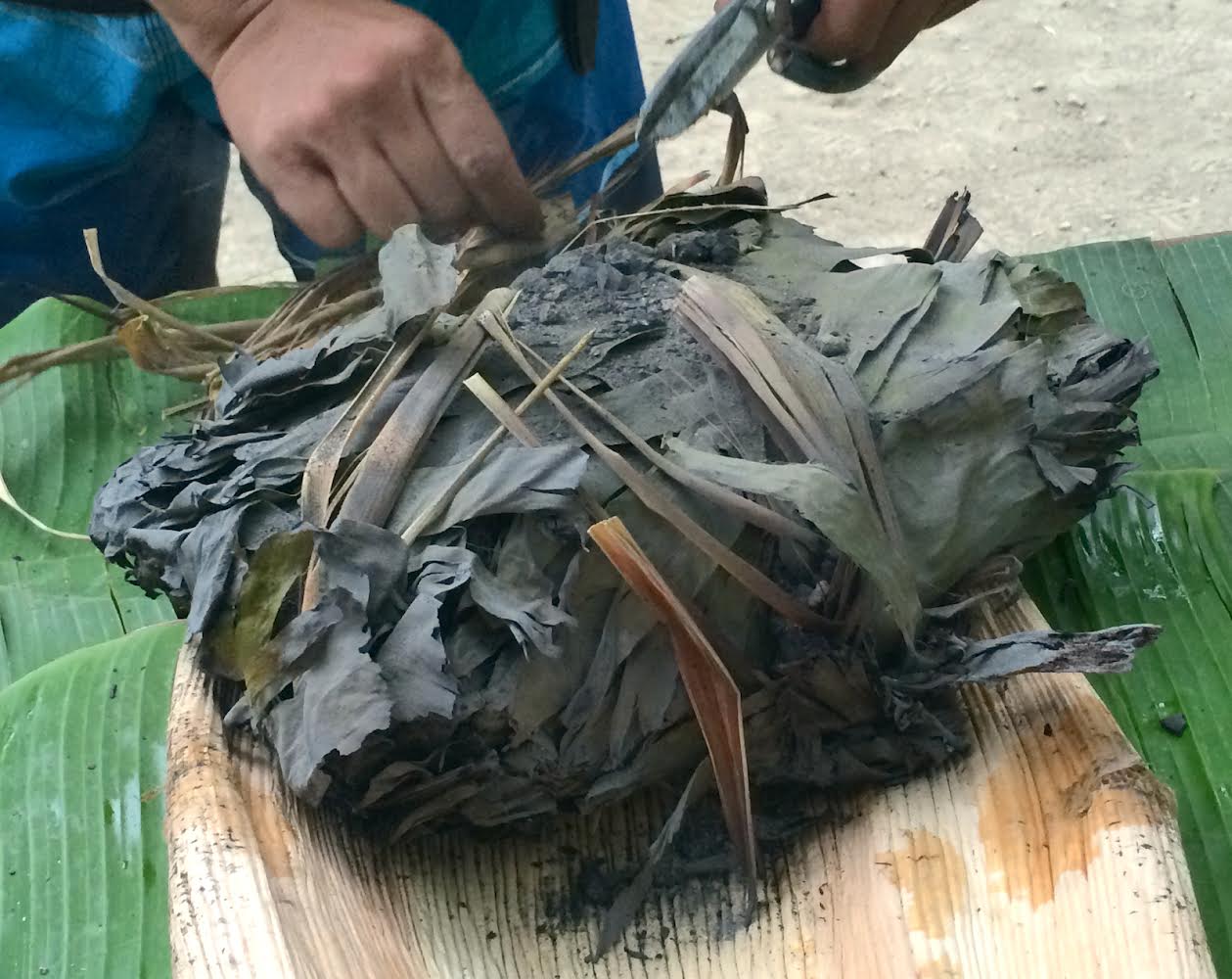 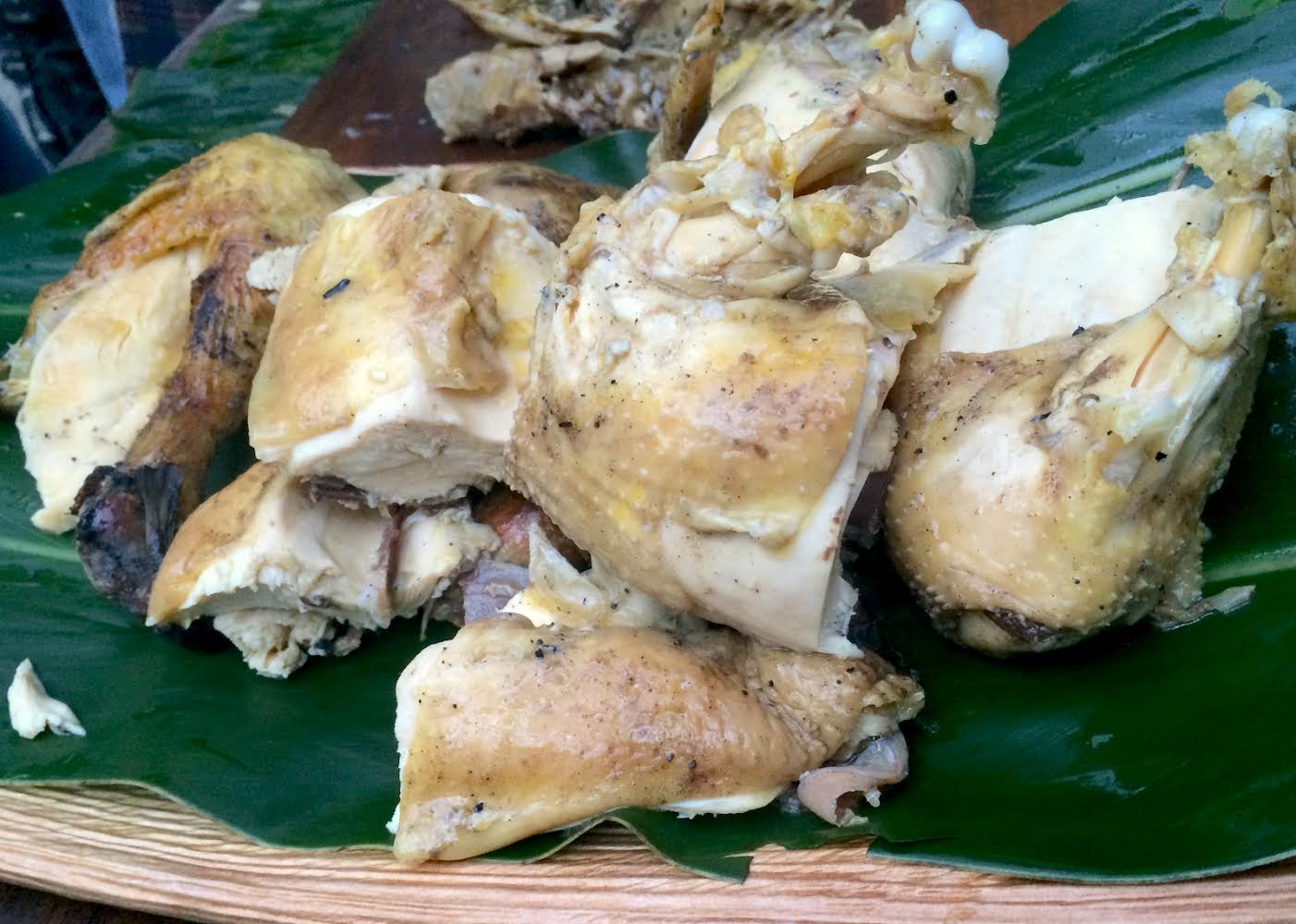 The resulting meat is juicy, smoky and tender, topped with incredibly flavorful skin and fat.

Bottles of thick, cloudy home-brewed millet liquor were passed around. Wary as outsiders may be of mystery hooch, the liquor was incredibly refreshing and reminiscent of a sweet pineapple cordial — an unexpected complement to the fresh, smoke-infused cuisine. 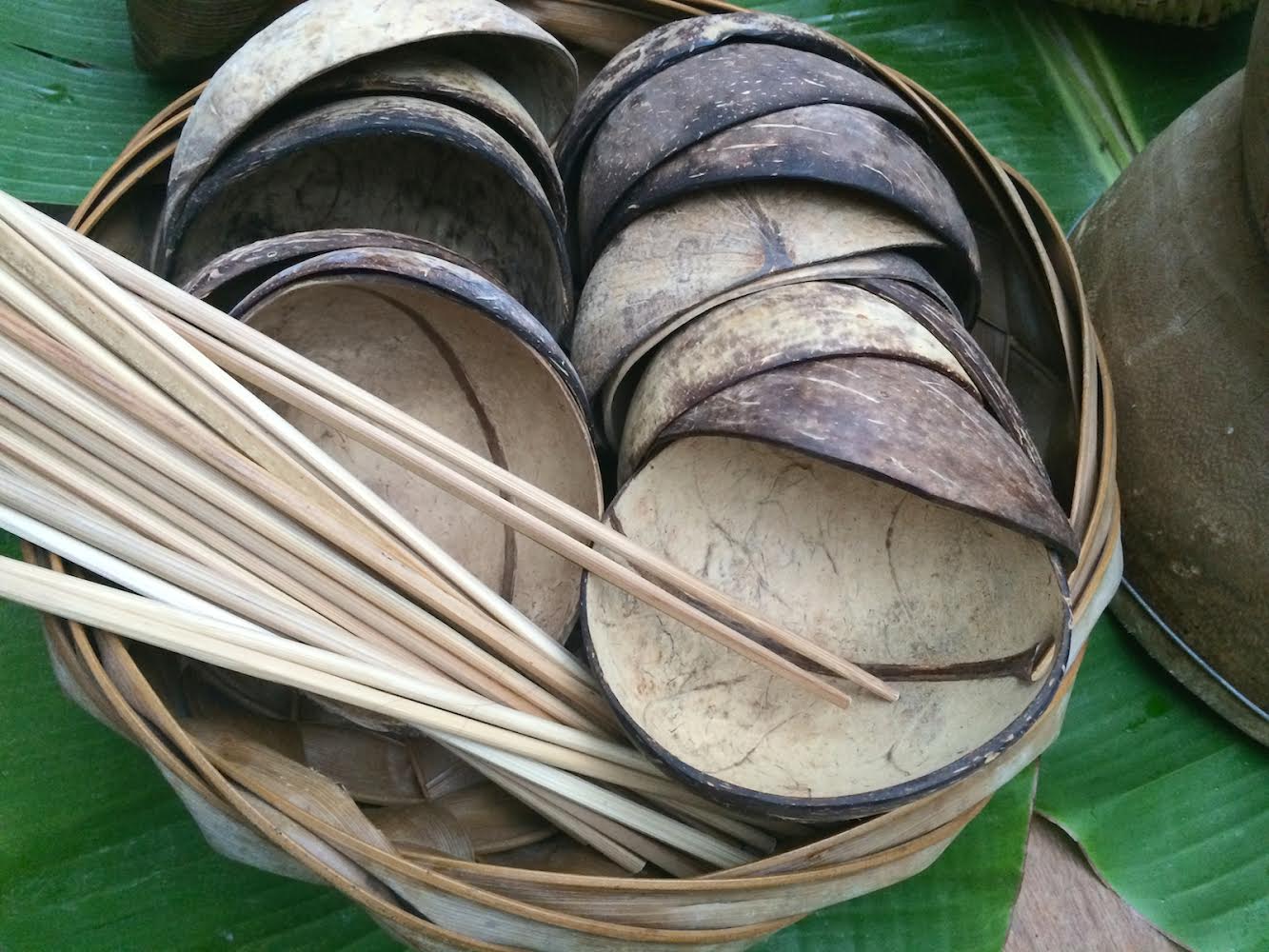 Hollowed-out coconuts and homemade bamboo chopsticks are the only servingware you need for a jungle feast.

Having spent the day with our master survivalist hosts, we prepared to call it a night and hit the road back to Hualien, but not before a private concert. Known for their love of singing and dancing — an Amis chant was featured in Enigma’s Return To Innocence — the villagers performed a few traditional songs for us, and poured more millet liquor, which quickly turned into a festive soirée. The lack of a common language ceased to matter with full bellies, strong spirits and nothing else to do in the wilderness but learn a centuries-old dance.

Read more about our trip: Taiwan’s Most Famous Soup Dumplings Are Exceedingly Hard To Make