When in Taipei, eat as the Taipeiers eat. And if the hourlong line of locals at Din Tai Fung on the basement floor of iconic Taipei 101 is any indication, what they eat is Michelin-starred xiao long bao, or soup dumplings. Din Tai Fung has eight locations in Taiwan (six in Taipei) plus four in the Los Angeles area, another two in Seattle and a dozen or so other outposts around the world. This place is very popular, deeply rooted and absolutely not messing around when it comes to perfect dumplings. That’s right, perfect.

Cut to the kitchen: diners can watch a team of a dozen chefs busy with meticulous dumpling assembly through windows separating the kitchen from the dining room. If you’d like to join along, as I did along with three American chefs, you’ll need to suit up in more than just chef’s whites. A surgical-grade hand and arm-wash, disposable face masks, aprons and hairnets are required to enter the workspace — the entire team is singularly devoted to quality and food safety, which is obvious when you see the immaculate back-of-house operation. Once properly equipped, we tackled the first step: rolling out the dough. 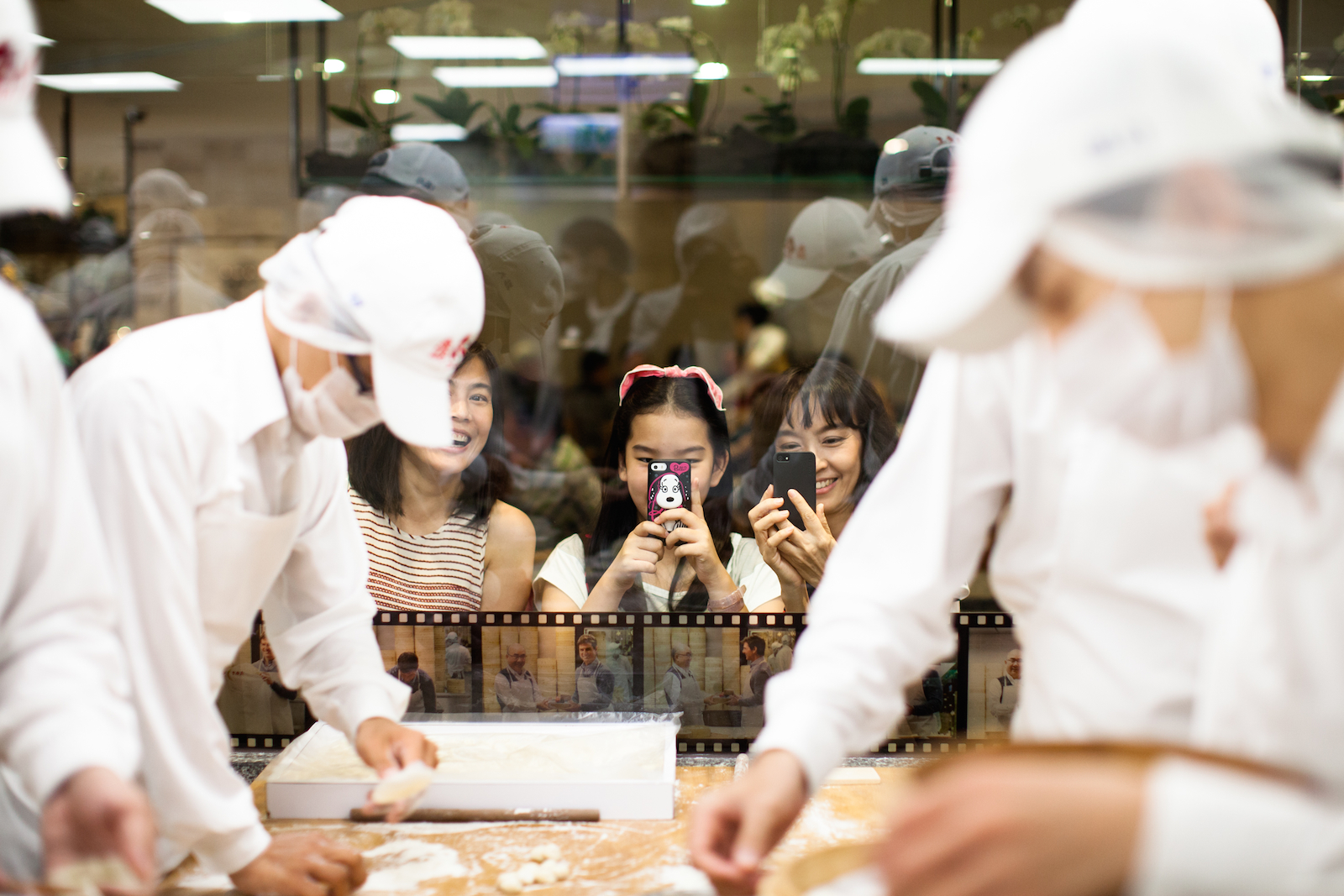 Here’s where perfection comes in: the ball of dough for each dumpling, which looks like a gnocchi, weighs precisely five grams. After a minimum of three years of training, the chefs section them out by hand with no need for weighing…but they do anyway — there were a dozen gram scales in the kitchen solely for this purpose. Using a small rolling pin, they roll, pull and stretch while rotating at 90-degree intervals until the skin is flat and round. This task took the American chefs about 30 seconds to complete before the Din Tai Fung masters took over, smiling, and demonstrated how they roll out 20 per minute. Each. Otherwise there would be no way to keep up with the orders pouring in from the diners (and again, the wait for a table as indicated by the LED sign outside was an hour).

Each 5-gram skin gets 16 grams of carefully sourced all-natural ground pork filling, which again, after three years of training doesn’t need to be weighed, but always is. We didn’t see one “dud” from the chefs the entire time we were attempting to make our own dumplings with preposterously ugly results. Once the skin is stuffed comes the really hard part: pinching. Each 21-gram dumpling is pinched exactly 18 times to form the pleated, swirled seal at the top.

The American chefs, albeit dexterous, couldn’t believe how difficult this was to pull off. Gravity plays its own part with the elasticity of the dough, as does the amount of flour and moisture on one’s fingers. Apparently Tom Cruise did a pretty good job when he visited the kitchen a few years ago, but I can’t imagine he achieved the flow of the masterful Din Tai Fung team. 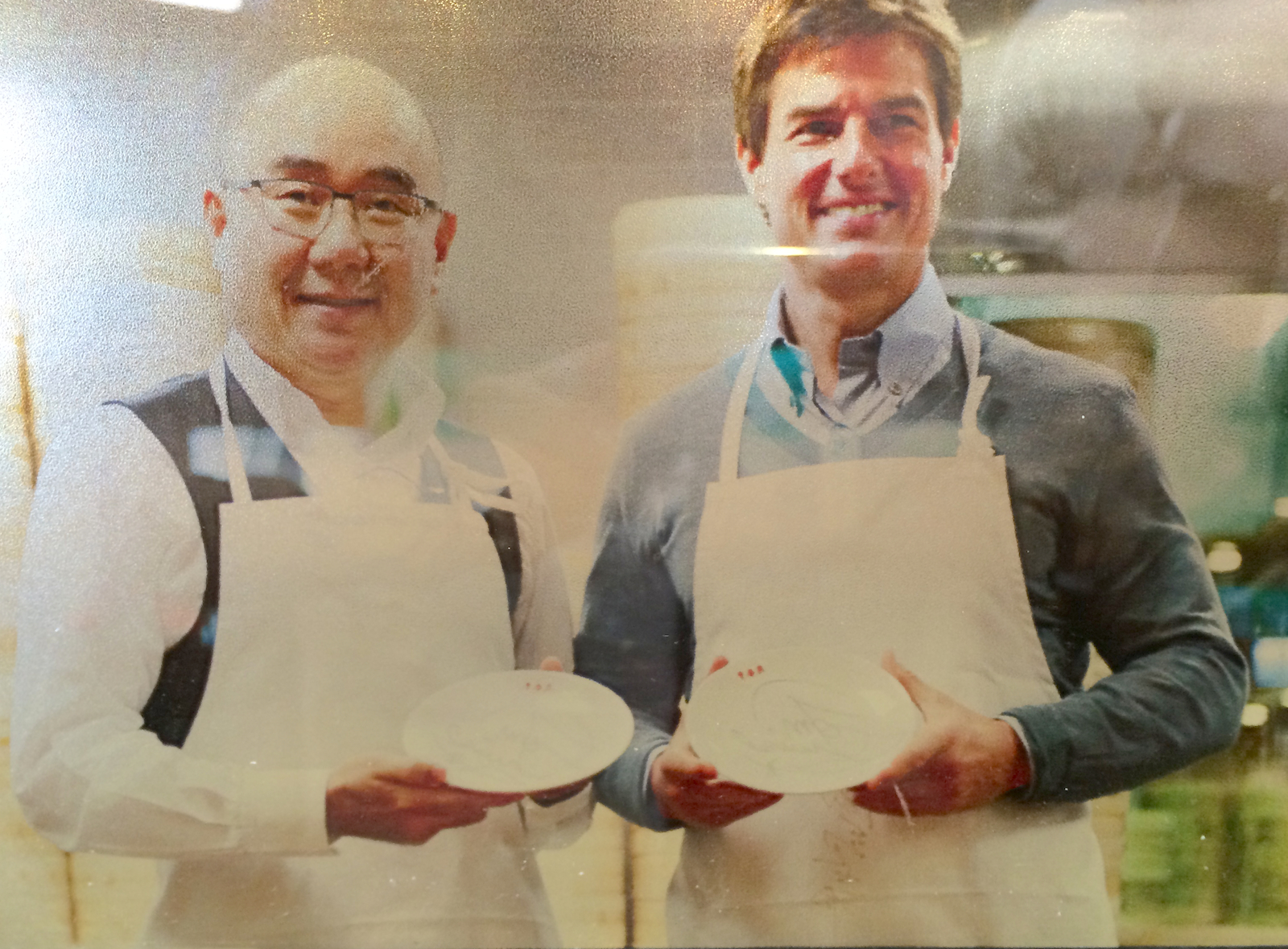 Finally, we sat down to eat course after course of every specialty the house offers, which unsurprisingly turned out to be a TON of dumplings — greens, crab and pork, shrimp and my favorite: pork and truffle. You might think the truffle would get lost in the rich pork mixture and you’d be right if each dumpling didn’t contain an entire gram of the good stuff, freshly shaved for each one. The aroma that wafts out as you pierce the skin to release the savory liquid is undeniable proof that this is an ideal application of an ingredient not typically found in traditional Asian cuisine.

That particular variety’s not what earned the restaurant Taiwan’s first-ever Michelin star, however. It was the perfection of a beloved local delicacy with humble roots — the restaurant’s owner originally sold cooking oil, churning out xiao long bao for supplemental income when oil began to be packaged in individual cans, decimating his business. It was okay though, his food was superb, his clientele loyal and the business of poking a chopstick through a soup-filled dumpling on a spoon soon expanded internationally. From Taiwan to Hong Kong to international cities with large Asian populations like Los Angeles, Seattle and Sydney, few food enthusiasts will turn down a beautiful savory parcel perched on a spoon as though it’s eager to be consumed with gusto.

Related — How To Eat Soup Dumplings: A Step-By-Step With Ed Schoenfeld

Other dishes not to miss: duck blood hot and sour soup, special seaweed salad, sautéed water spinach and cucumbers in chili oil. You waited in a 45-minute line, read walls plastered with accolades and watched the flawless, smiling front and razor-sharp back of the house perform a delicious, time-tested culinary dance while your stomach rumbled. Order it all.