The bacon craze may have passed, but people still love their protein, especially when it comes in the form of calf’s brain cream to spread on blinis, or a whole roasted alligator stuffed with chicken served with Andouille jambalaya. Yes, those are real things you can eat, and here’s where to find them.

1. Dallas: Bacon-Crusted Bone Marrow and Caviar | Knife
Though the 240-day aged steak has gotten most of the buzz, the real winner at John Tesar’s new modern steakhouse is the bone marrow. Think rich marrow topped with bacon-fat-toasted breadcrumbs, topped with caviar for a salty kick at the end of a decadent bite.
5680 N Central Expy, Dallas, TX 75206, 214-443-9339

2. Chicago: The Bomb | Kaiser Tiger
Why waste your time with the bacon grenades (deep-fried, bacon-wrapped meatballs) at this sausage and beer joint when you could go straight to the big-time? Kaiser Tiger takes five pounds of spicy beef-and-pork sausage, stuffs it with pepper bacon, wraps the whole thing in a brown-sugar-bacon “weave” and then smokes it for hours. Served with fries, buns and fixings, it clocks in at $70. Or exercise some restraint and spend $15 on a Bomb Sandwich, a “healthy slice” of the whole thing on a bun, with cheese and BBQ sauce.
1415 W Randolph St, Chicago, IL 60601, 312-243-3100

3. Montreal: Double Down | Joe Beef
Apparently this one started as a joke. Chef David McMillan wanted “to come up with the perfect lure” for food bloggers and started sending out the two deep-fried slabs of foie gras with bacon and cheese in between, smothered with maple syrup, whenever a blogger came in to eat. For better or worse, the sandwich became one of the restaurant’s iconic dishes, which means it will always be on the menu.
2491 Rue Notre-Dame Ouest, Montréal, QC H3J 1N6, Canada, 514-935-6504 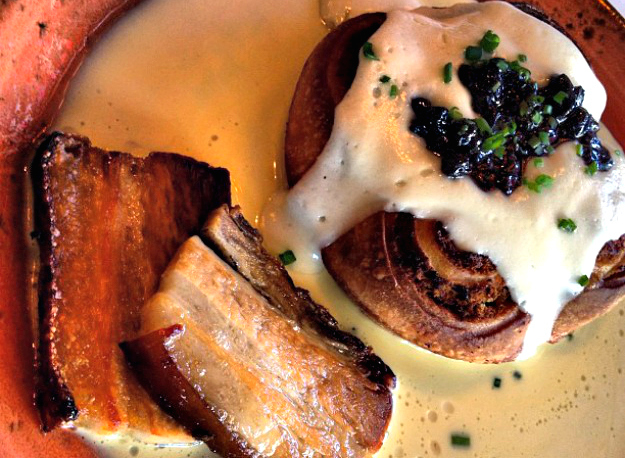 Only in Vegas will you find a gooey cinnamon roll topped with duck-fat frosting and pork belly.

4. Las Vegas: Duck Confit Cinnamon Roll | Comme Ca
Savory and sweet meet once again at this French brasserie from chef David Myers. The gooey roll comes stuffed with duck confit, topped with a duck-fat frosting and duck chicharrones with a side of pork belly for a healthy start to your morning.
3708 S Las Vegas Blvd, Las Vegas, NV 89109, 702-698-7910

5. New York City: Calf’s Brain Cream | Takashi
Offal is the name of the game at this upscale guts house in West Soho. But before you dive into the flash-boiled stomach with ponzu sauce and three types of tongue, start your meal by squeezing some calf’s brain cream out of a tube onto blinis, then top the crepe-like concoction with caviar.
456 Hudson St, New York, NY 10014, 212-414-2929

7. Austin, TX: Ice Cream Sandwich a la Meat | Goldis Sausage Company
Owner Keenan Goldis’ Facebook diatribes on meat are just one reason to love this Austin trailer. Another? After your sausage lunch or dinner, you can indulge in an apple pie sausage or banana sausage on a brioche bun with vanilla ice cream.
503 Colorado St, Austin, TX 78701, 401-527-9050 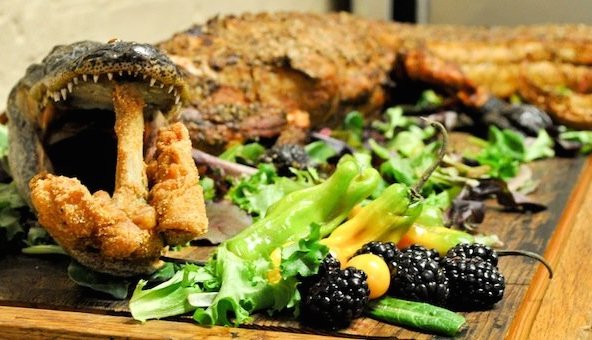 The whole alligator that feeds 10-12 is stuffed with whole chickens and served with a variety of Southern sides.

8. Chicago: Whole Alligator | Frontier
This West Town restaurant dedicates an entire section of its menu to whole-animal service. Sure, you could try the free-range American pig for $550 or the goat for $575. But we suggest going whole hog with the market-price Louisiana alligator, which is stuffed with whole chickens (plural!) and then smoked and roasted over apple and cherry wood. It’s served with Andouille jambalaya, Caesar salad, mac and cheese, and cheddar cornbread and feeds 10 to 12 very hungry adults.
1072 N Milwaukee Ave, Chicago, IL 60642, 773-772-4322

10. New Orleans: Death by Gumbo | Restaurant R’evolution
The fine dining establishment in New Orleans may have a special footrest for your purse and present mignardise in a treasure chest after the meal, but executive chef Rick Tramato isn’t afraid to get down with some gumbo. This one features roasted quail, Andouille sausage and oysters, served with foie gras biscuits with duck bacon on top.
777 Bienville St, New Orleans, LA 70130, 504-553-2277