Today is officially Sean Brock Day at Food Republic. Brock is no stranger to us, and we like it that way. He’s one of the most-passionate culinary ambassadors for the American South, particularly his beloved Lowcountry (the coastal region of South Carolina). He’s also one of the nicest guys you could share a bottle of Pappy with (and he’s usually buying). Today marks the release of his first cookbook, Heritage  — which tells stories (via recipes) about his time running restaurant McCrady’s in Charleston and a location of Husk in both Charleston and Nashville. We figured we would mark the occasion with stories, recipes and some guest writing from the man himself. First up, an interview.

“I dumped my entire brain into this book,” Sean Brock told us last week after frying up a mess of chicken in Williamsburg, Brooklyn. No, Brock is not about to enter Brooklyn’s hard-fought fried chicken hand-to-hand combat anytime soon (for the record, it’s: #1 Pies ‘n’ Thighs; #2 The Commodore), but was doing some filming at a loft space off Ainslie Street to coincide with the release of his cookbook.

The hefty hardcover, put out by Artisan, tells the story of the foods of the Lowcountry through essays and profiles of the region’s great purveyors and food leaders, while recipes zigzag between the heady experimental cooking at McCrady’s (check page 145 for the recipe that calls for six lamb hearts) and the simplest of home cooking, like butter bean chow chow and dilled green tomatoes. And as we find out in this interview, while this book is essentially the first chapter in the evolving saga of Sean Brock, it’s pretty damn well written.

At your home, you have an extensive collection of 19th century cookbooks. How do you see this book fitting into that canon of scholarship?
Those books are the reason that I decided I wanted to write a cookbook. For the longest time I didn’t want to because I didn’t want people to take the recipe, cook it and 20 years from now judge me and my cooking skills on a recipe that I’ll continue to tweak every time I make it. That’s just how we cook in the restaurant. Our goal is to make every recipe better every single day. It’s that evolution that I was terrified of missing in this book.

There’s a real finality to the creative process when it’s presented as a $40 hardcover…
A lot of those recipes [in Heritage] have changed. They’re all amazing, but the way I fry chicken’s a little bit different now. That’s just how I am, as a cook, and that’s how I’ll always be. But it was looking through those old books late at night after work, drinking whiskey, sitting in front of piles and piles of ’em, smelling them and feeling the letter-pressed words on there, and thinking about how people cooked then. I would study those recipes and I would try and cook a lot of them, and most of them never worked — for many, many reasons. But that made me realize that a cookbook is really a snapshot. It’s a moment in time, it’s capturing a specific moment in someone’s life. Those books inspired me more than anything I could ever imagine. And it got my wheels turning and it got me inspired to riff off of it — to do a modern day take on it. And I realized that that’s what a book should be about. It should be about inspiring people.

The book requires a range of technical skills. There’s a hoecake recipe that maybe a 10-year-old could pull off. But then you have a lot of other things that are very technically driven. Are you speaking to many audiences there? Who do you most want to read this book?
First and foremost, the idea was to write a book about the Lowcountry. And that eventually turned into a book about my life, because the more I wrote, the more I started putting things down on paper. I realized how therapeutic that was and that really helped me see things in a new perspective. I started before Husk was even open. Husk was a construction site. That was November 2010. So this has been many years in the making. I’m really glad that I took that amount of time, because as I sit down and look at the book now, it says what I want it to say. And I got lucky. I broke my knee in January and I couldn’t walk, so I would sit with the book and would just lay it out all over the floor. I really went through it, nitpicking and nitpicking and nitpicking. Hours and hours and hours. And I wouldn’t have been able to do that if I was working my normal schedule. 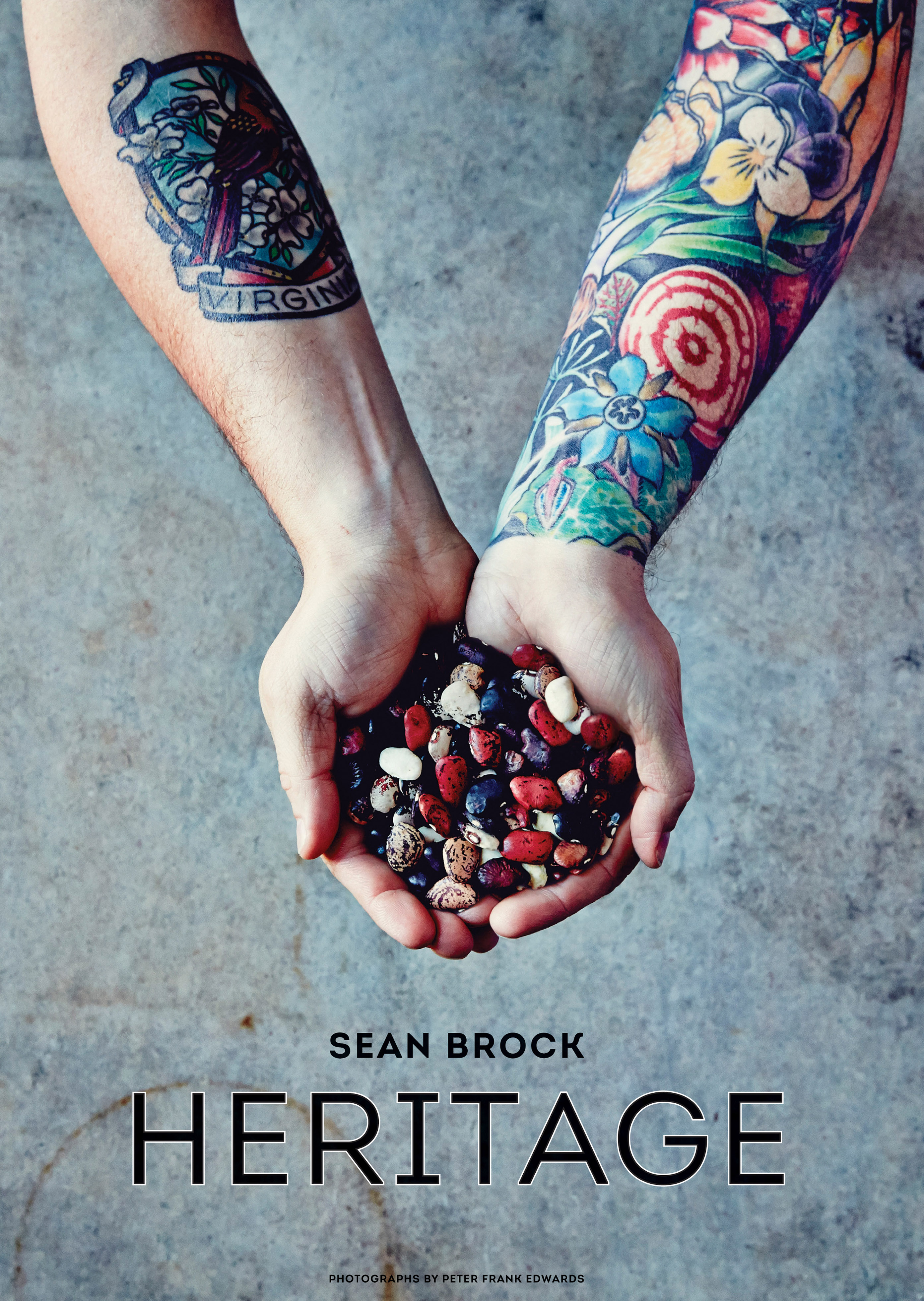 On the book’s cover Brock is holding over 20 varieties of heirloom beans.

The writing sounds like you.
Yeah, I write like I talk. But I didn’t start writing that way. I was really obsessed with being a good writer.

Like you stylized? You used stupid food writer words like unctuous?
And then I realized that people wanted to hear me talk. And I wanted it to be like you were having a conversation with me. I think that’s what makes a great book, is when you read it, you feel like you’re in the room with the person. And that’s what I really tried to do — to capture that voice. And just hanging out, hearing stories. Storytelling’s really important in the South, and that’s really what it is, is a book full of stories.

Lastly, was the cover your idea? I like it a lot.
We really thought a lot about the cover. That’s everything, and I wanted it to tell the story of the book. If you read through the book, you’ll see the important of seed-saving and particular plant varietals that are indigenous to specific regions throughout the south. So that’s me holding 25 varieties of heirloom beans from the south. Beans that I’ve been collecting – since I was I don’t know, since I was 19 years old. Beans from my grandmother, beans from different families, where I grew up, but also beans from everywhere that I travel in the South.

Sean Brock is currently on tour, appearing at dinners and books signings around the states. Check here for tour dates.

Check back throughout Sean Brock Day for more stories, a special video tribute to the cheeseburger and even a few recipes. In the meantime, here’s more on Sean Brock for you.