If you’ve had coffee at Chicago-based, world-conquering Intelligentsia Coffee & Tea any time in the last few years, there is a good chance you recall the drink (a cappuccino or pour-over perhaps) — as well as the vessel in which it was served. It was a porcelain cup, remember, thick at the base to keep the drink warm. The handle was flush with the mug’s rim, which accommodated your thumb’s natural inclination to come to a rest there at the top and steady the mug. The cup was to your hand like the hammer is to Thor. It felt like it belonged there.

That cup, and increasingly the cups of choice among specialty coffee shops, was designed by notNeutral, a product design and retail firm in Los Angeles.

Established in 2001, notNeutral is an arm of the much larger Rios Clementi Hale Studios, a landscape, architecture and interior design firm. RCH designs all sorts of spaces, including Downtown L.A.’s Grand Park, many restaurants and the iconic Austin City Limits venue in the Texas state capitol.

As the product design wing, notNeutral focuses on projects on considerably smaller scales, like housewares and tablewares. In general, notNeutral’s general ethos is, as Creative Director Chiaki Kanda puts it, “playful but not frivolous.” Thus, you’ll find in notNeutral’s catalogue plates decorated with Central Park that may inspire you to meditate on how open spaces interact with urban landscapes (RCH and notNeutral share an airy, two-story open office, so it’s not surprising the two influence one another) and tables with ribbons for legs.

And, right, those coffee cups.

NotNeutral’s foray in the specialty coffee world began, as many coffee-related things begin these days, with Intelligentsia. It was around 2008, and the specialty coffee company was building out its coffee bar in Venice, California. “We were just starting to look at every tactile element that a customer experiences,” says Kyle Glanville, who was Intelligentsia’s Director of Innovation at the time (Glanville now runs G&B Coffee and Go Get Em Tiger with Charles Babinski).

What was in Intelligentsia’s cabinet then, however, was not ideal for barista or customer.

“Like everyone else, we were using an Italian porcelain manufacturer, ACF,” Glanville says. “They were too heavy, they were not delicate, they didn’t feel good to interact with. And a cup that’s usually good for latte art is usually bad for drinking out of: they tend to be flat and very low profile. You can make huge, beautiful, intricate designs because you could draw on top of your coffee however you want, but they were cumbersome for the customer.” Imagine drinking a latte out of a shallow cereal bowl.

Cup handles, too, were too often too small to be of any consequence. And then there was the problem with aroma, or lack of it.

“When I was a younger barista, every demitasse favored in third wave coffee was a demitasse that made it look like the espresso was big, so people wouldn’t complain about the size of the shot,” Glanville says. As you downed your espresso, then, the opposite side of the tiny demitasse would go right under your nose. If you’ve read your Harold McGee and understand how aroma and flavor are intertwined, you’ll understand how a cup like that is not ideal for coffees with delicate, floral notes — exactly what Glanville says Intelligentsia was exploring.

Enter notNeutral. With Glanville leading the project from Intelligentsia’s side, notNeutral set about reconceptualizing coffee drinkware. The shared goal was to create an extended family of cups for espressos, cappuccinos, lattes and filtered coffee (plus a creamer); these would properly showcase the company’s coffee, allow baristas to best do their work and improve the customer experience. Beyond pure utility, these also would be visually distinctive, imbued with character and personality. These cups would ”live” on the table, as Kanda puts it, long after the drink was finished.

The entire R&D process took over a year. Triangular-shaped cups intended to capture precious aromas were nixed (turns out, a triangular canvas makes for terrible latte art). Handles were shaped and reshaped. The cup’s interior curvature, or slope, was meticulously calculated, with notNeutral printing one 3D prototype after another for Glanville and his team to test in Intelligentsia’s lab. There, they pulled shots and poured milk, videotaping the entire process so, like coaches watching tape, they could replay the footage in slow motion and catch flaws in play.

“Sometimes the latte art would break,” Glanville says. “The flow of the milk would go under and bubble up on the other side, breaking the pattern at the top.” The slope was corrected. More prototypes printed. More milk poured. More tape replayed. 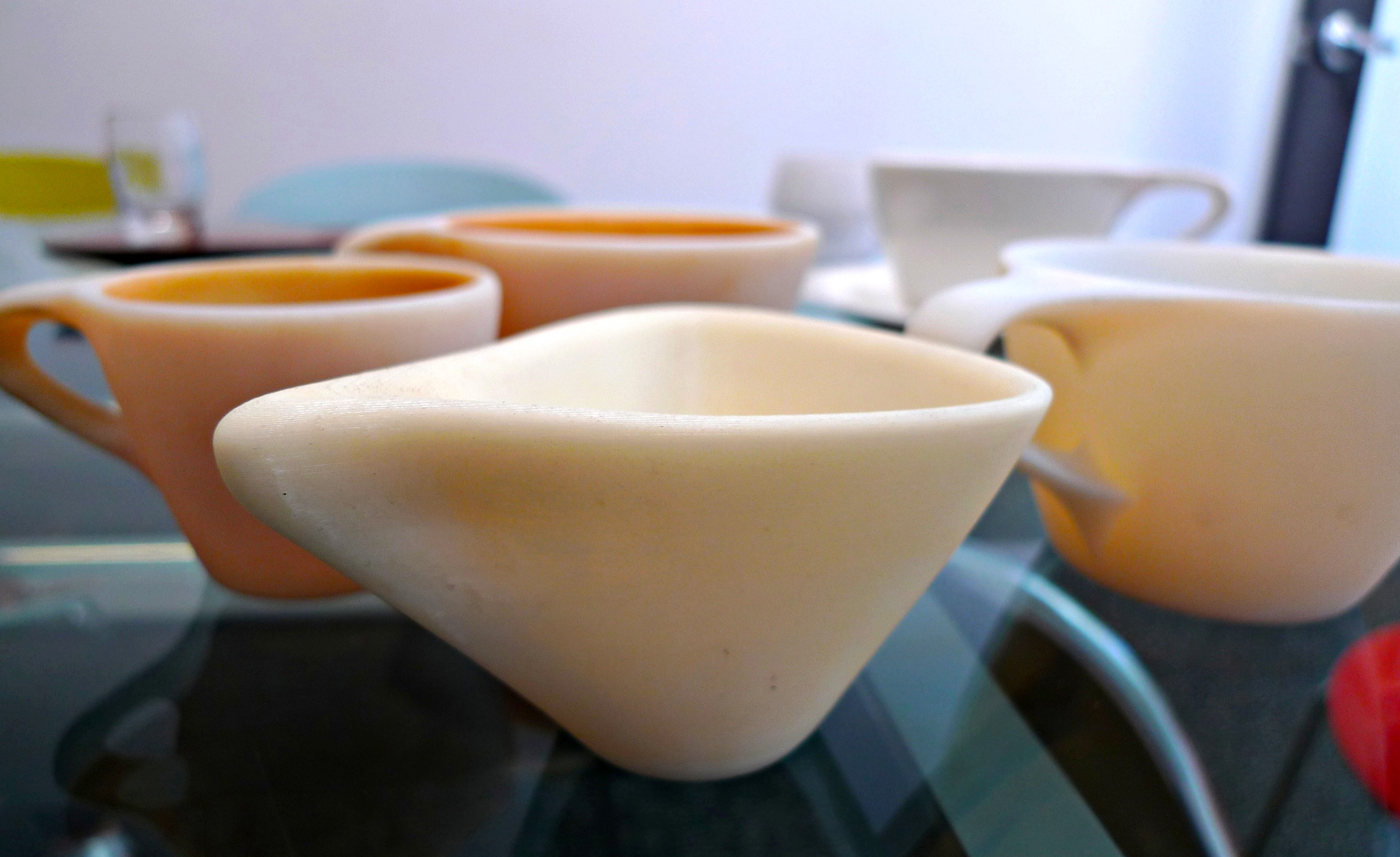 Prototypes at the notNeautral offices in Los Angeles.

The final result was what notNeutral named its Lino collection, the same cups you see stacked on Intelligentsia’s espresso machines today. And these are the same cups that you see stacked on many an espresso machine today; the fact that they’re popular with specialty coffee shops here and abroad is testament to both Intelligentsia’s influence and how well the cups were designed. Indeed, with its sleek profile and that flush handle, these are so visually distinctive that once you see it, you’ll recognize it everywhere, from Houndstooth in Austin to the Rapha Cycling Clubs in the U.K. “Now, it’s almost strange to walk into a specialty coffee shop and not see a notNeutral cup,” Glanville says. “It’s that prevalent.”

NotNeutral, meanwhile, has created variations on the Lino theme. The Meno is essentially the Lino sans handle, and, more recently, the Fina is the Lino’s buttoned up cousin. Designed in collaboration with Seattle restaurant Canlis, these are made with new bone china and are thin and lightweight, with a warm, ivory hue. Fitting, in other words, for a fine dining setting.

And then there’s notNeutral’s Gino dripper, a sleek, handle-less glass pourover brewing device that would not be out of place on the space station in 2001. A double walled glass keeps the coffee hot as it brews and flat bottom facilitates even extraction; lest you have any doubts that it brews a damn good cup of coffee, last year’s U.S. Brewers Cup Champion, Todd Goldsworthy, used the Gino dripper and won. No doubt you’ll see Ginos again in this year’s competitions.

As for future products and/or your holiday wishlist, the Lino mugs will soon come in matte black and glossy red, and the Fina fine dining set will be available for your fine dining table this fall. NotNeutral also collaborated with the Cooper Hewitt Design Museum to create nifty graphic tableware. And there are talks about trays intended for espressos that are served alongside a palate cleanser like sparkling water. The design is in its early stages. Certainly it will be playful. And not at all frivolous.

Find notNeutral ’s products online at notneutral.com or in its retail shops in Los Angeles and Pasadena, California.