Greetings from the front porch of an impossibly charming guesthouse nestled among hundreds of acres of ridiculously picturesque vineyards on the King Estate Winery, located 20 miles southwest of Eugene, Oregon, near the exceedingly Deliverance-like town of Lorane. It’s been eight days since I loaded up my SUV with clothing and supplies and drove away from my crib in Venice, California. I don’t expect to be back there again anytime soon.

I’m on the road researching a book that HarperCollins has graciously offered to publish. The working title is American Wino. If all goes as planned — and, let’s face it, there’s little chance of that happening — what I’ll eventually wind up producing is a tome that is part vision-quest, part guidebook, part journey into the bizarre tapestry of American life. Indeed, it is my sincerest hope that Wino will turn out to be a work of epic importance that will make you laugh, make you cry, and teach you a whole lot about wine.

A little context. America is the fourth leading producer of wine in the world (behind France, Italy and Spain). The magical elixir is now made in every state of the union, and the U.S. pumps out close to five billion bottles of the stuff each year. Yet wine remains the most complex and confusing part of the alcohol industry. Despite being a longstanding member of the booze press and writing about it for esteemed outlets such as this one, I still get flummoxed when asked to outline the major differences between a Syrah and a Cabernet Franc.

So OK. Wine. But, if I may pose the question in the most annoying way possible… whyne?

In the summer of 2010 my brother Brian drowned off the coast of Venice, CA, just a Frisbee’s toss away from my home. By this point, I’d experienced more than my share of heartache. If anyone was equipped to deal with his brother’s dead body getting pulled out of the water six days later, it should have been me. Still, at 40, this latest middle finger in the eye from the universe dismantled me like nothing I’d experienced before.

Yet in the midst of this devastating tragedy, something miraculous occurred.

On the plane ride home from Brian’s funeral I found myself seated next to a beautiful young woman. I still knew it would be unseemly to flirt with a woman while mourning a departed family member, no matter how much my dead brother would have wanted me to. So for most of the flight we sat silently beside one another, me earbudded in to a playlist of the most woebegone music ever recorded, her reading Under the Tuscan Sun. It wasn’t until the final descent into Los Angeles that this woman— who we’ll call J— tapped me on the shoulder and said the words that would alter the course of my life forever: “The flight attendant wants you to turn off the iPod.”

On my 17th listen through U2’s plaintive blues “Love Rescue Me,” I saw this for what it clearly was: a sign that Fate had intervened. Me and J struck up a conversation and over the next few weeks formed a friendship that soon blossomed into romance. From the very first kiss, there wasn’t a doubt in my mind that I had met the woman I was destined to marry. At my absolute nadir, love had indeed come to rescue me, delivered— I was convinced— by my dead brother, now turned spectral wingman. J was to be my salvation, my reason to believe again. She was, simply put, The One.

And four years later she was The One who walked out of my life for good, claiming she needed to go “find herself” (no, seriously). The first few weeks after J decamped were brutal, with me holed up in my apartment with the curtains drawn blasting “Love Rescue Me” over and over again, in the hope that it would somehow summon J to tell me I needed to shut down all electronic devices for landing and that somehow, impossibly, Brian wasn’t actually dead. The only thing I heard, however, was my irate neighbor pounding on the walls in the middle of the night, imploring me to turn down the music and suggesting I attempt several unnatural sex acts. The fact that I found this comforting is testament to my desperate state.

After an experience like this, many have been known to have a drink or two. As a professional booze writer, however, a drink or two wasn’t going to cut it. I needed something monumental. Something serious. And so it was that I, Dan Dunn, celebrated booze writer and noted good time charlie, took the first step: admitting that I needed help, and that I was powerless over alcohol. Specifically wine. More specifically, my ability to understand the damn stuff. 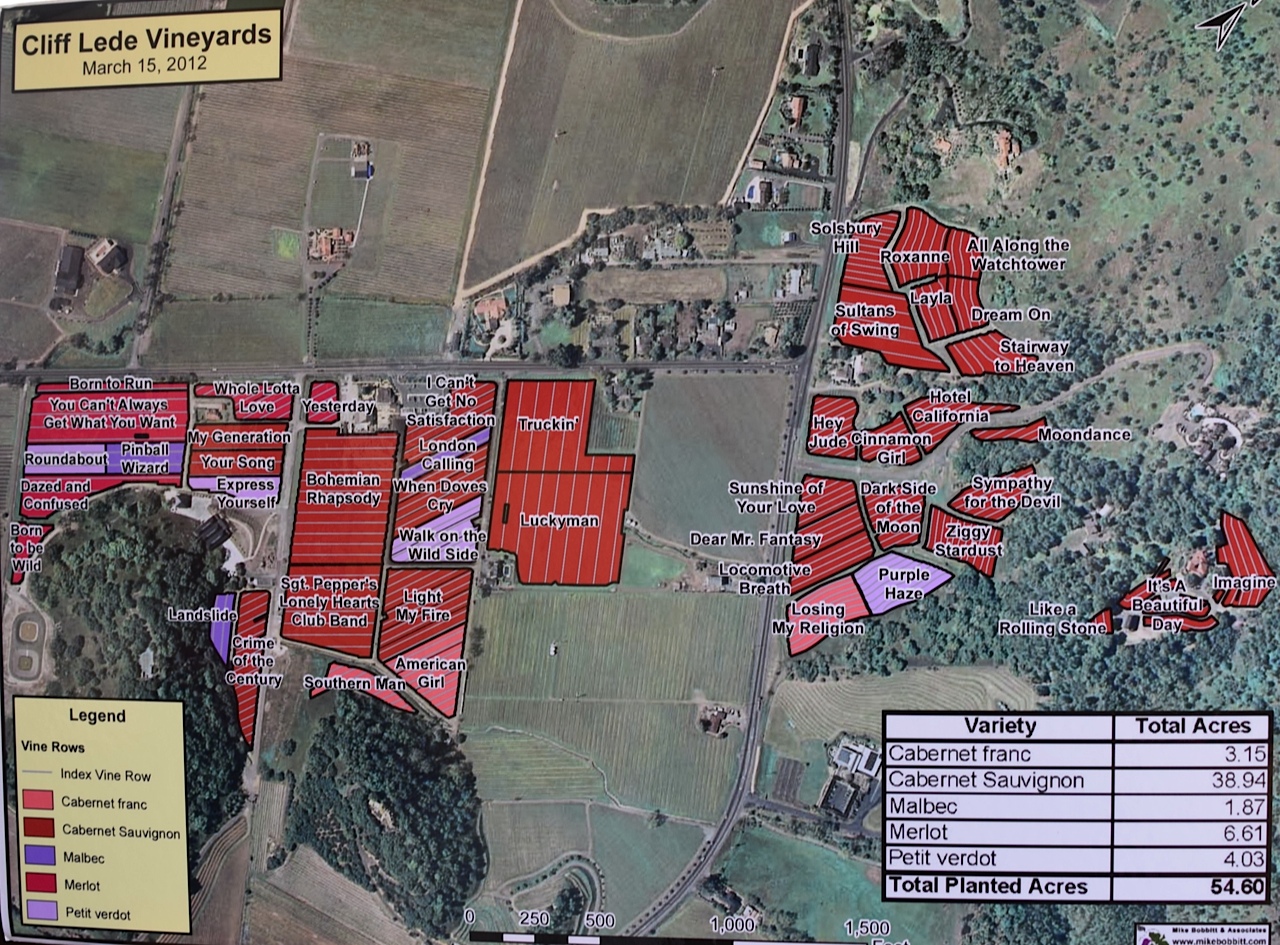 At Cliff Lede Vineyards in Yountville, every block is named after a classic rock tune. Just some of the wine knowledge Dan Dunn has already acquired.

While I’d been to the celebrated wine-making regions of France and California and figured out how to fake my way through a tasting using undefinable modifiers (“redolent of a fall breeze,”) or faux-erudite oppositions (“passionate yet refined”), when it came time to really throw down with the experts I was lost. Plus it bugged me that that you never heard about whether the stuff from Mississippi was any good.

So with little more than a duffel bag full of clothes, an iPod full of The Pogues (man cannot live on one Irish band alone) and a head full of unresolved issues, I’ve decided to hit the road. My primary objective— beyond not being arrested or killed — is to learn everything worthwhile there is to know about how wine is made, sold and consumed in America. To that end, I’m determined to log as many miles as necessary on an oenophilic odyssey across, around and through this great nation. On the way I will sample vintages from Sonoma to St. Petersburg and everywhere in between. (I’m almost positive Mississippi’s in between those points, but will have to check.)

Like Aeneas, Dorothy and the Dumb & Dumber guys before me, my quest is fueled by an ultimate goal of epic proportions. In this case, to make it in one piece to one of the world’s foremost epicurean events, the 2015 Pebble Beach Food & Wine Festival. There I am scheduled to showcase my newfound expertise headlining a seminar as “one of the world’s leading authorities on American viticulture” in front of not only some of the snootiest and most demanding of America’s one percent, but a witheringly knowledgeable array of my industry “friends,” none of whom will hesitate to drum me from their corps should I fail, especially given what I have done with some of their girlfriends over the years.

My journey began in Santa Barbara County, then took me north to Napa and Sonoma, the jewels in the crown of the American wine industry. I’m in Oregon now, with Washington to follow. Then it’s on to Big Sky country. I’ll pop down to Colorado (where weed, the wine of drugs, is legal) before venturing to the Dakotas, Minnesota, Wisconsin, Illinois and Michigan. Rolling on through Ohio, Pennsylvania, upstate New York (home of MD 20/20) and New England, then south to the great state of New Jersey (home of Manischewitz). Then it’s a straight jaunt down the seaboard as the states get redder and the wine gets… well I’ll just have to see how the wine gets. After Virginia, Kentucky, Tennessee, the Carolinas, Georgia, Florida, Alabama and— ah there it is —Mississippi, it’ll be time for a well-deserved rest at the Wiederkehr Wine Cellars Trailer Park in Arkansas, before venturing through Texas, New Mexico, Nevada, then on to the West Coast for a much needed Southern California break. The final leg of the journey, of course, is Pebble Beach.

As my wine knowledge grows and becomes more complex, I’ll be sharing it here in the form of digestible, actionable nuggets. It’ll be like a wine-tasting course at your local community college extension program, only with more sex and less crushing despair.

For example, during a visit to Chimney Rock Winery in Napa’s Stags Leap District, I learned that it takes 1 gallon of yeast to ferment 3,800 gallons of grape juice. I also discovered that while most vineyard blocks are mapped out with a straight-forward A,B,C or 1,2,3 system, at Cliff Lede Vineyards in Yountville, each block is named after a classic rock tune. Oh, and that the winery appears to be the natural habitat of hot women on bachelorette party excursions. Obviously, the ladies still love Dark Side of the Moon!

And I won’t soon forget the lovely Karin Warnelius-Miller of Garden Creek Vineyards in the Alexander Valley, who taught me that when it comes to winemaking “logic doesn’t work all the time. Intuition is a vital part of the process.”

With that, my gut says it’s time to head out and explore Oregon and Washington, two states with both the highest per-capita density of jazz beards and knit caps on the planet, and a slew of world-class vineyards. What could go right?

But I’ll be filing more reports here in the weeks to come. After all, I’m nothing without my words. With them, I intend to provoke joy, sadness, anger, knowledge, inspiration, despair (just not the crushing kind) and, hopefully, some book sales down the line.

More from Dan Dunn in his Food Republic column, The Imbiber: