The bootleg copy of Lonely Planet Cambodia I picked up in Ho Chi Minh City while bumming around Southeast Asia this past spring had a small article on spiders. Eating arachnids is popular in a town called Skuon, I learned, a frequent stop for buses between the capital city of Phnom Penh and the temples of Ankgor Wat. You’ll know you’re in Skuon, LP advised, by the platters of fried tarantulas sold at the rest stop alongside more mundane snacks like pork buns and bunches of bananas. Just reading about tarantulas as food gave me the heebie-jeebies, and I closed the book with a creepy-crawly shudder.

Two days later I boarded a bus to Phnom Penh, where my seat neighbor turned out to be a fellow American, a friendly South Carolinian and Peace Corps volunteer named Megan. To my delight I learned she’d been living in Cambodia for nearly two years, and as I pressed her for details about the country’s food, basic phrases and must-visit cities, I finally registered where it was she said she’d been living. “Wait, S-K-U-O-N, the town that’s famous for spiders?” I asked. Megan affirmed that was indeed the place. She’d tried them, she said, and they weren’t bad, though these days she asked her host family to leave her out of the spider-eating — they were much more into it than she was. “You should visit,” she offered. “We can eat tarantulas.”

Sure, I’d chomped into Mexican-style grasshoppers at a New York City cantina and forked into an ant-egg omelette in the north of Thailand, but eating a spider seemed entirely next-level.

I couldn’t turn down an invitation like that, not only to tear into tarantulas, but to spend the night in the home of an actual Cambodian family. Fortune (if you wanted to call it that) had gobsmacked me: I was not getting out of eating spiders on this trip. Megan and I discussed timing — she had some travel planned, and I wanted to spend some time in Phnom Penh and go see Angkor Wat, so we agreed we’d try to meet up in a couple of weeks. That also gave me time to work up some spider-eating nerve, I figured.

Sure, I’d chomped into Mexican-style grasshoppers at a New York City cantina and forked into an ant-egg omelette in the north of Thailand, but eating a spider —especially a tarantula — seemed entirely next-level. For the next few weeks, as I danced till the wee hours in Phnom Penh, explored the temples of Angkor Wat and went off-grid for a couple of days on an island near Kep, the idea that I’d soon be eating spiders stuck in the back of my mind.

Finally, the day arrived. I boarded a bus in Siam Reap before dawn, calling Megan on my cheap local cell phone once it got to be a reasonable hour so she could explain to the driver in Khmer that he was to drop me in Skuon south of the bus depot. She probably instructed him to let me at the roadside restaurant with the giant spider statues out front, though I didn’t know it at the time.

Sure enough, that’s what greeted me when I hopped down to the dusty parking lot with my travel-battered suitcase: a large open-air roadside restaurant which beckoned highway drivers with several eight-legged, three-foot-high mascots out front. There was no mistaking this very spot as Cambodia’s spider central.

Strangely enough we didn’t find any spiders at this establishment, but Megan was unconcerned: we’d drop my bags at her host family’s house across the road, she suggested, and then try the restaurant next door, which was bound to have the creatures for sale. I agreed, happy to have bought myself another few minutes of spider-stalling.

But not for long: We found spiders on offer in front of the other restaurant, separated by size — 50 cents for the large ones, and 25 cents for medium, rather pricey by Cambodian standards, I thought, given that a streetside plate of noodles generally goes for around a dollar. As a treat, the vendor lifted her platter to give us a glimpse of the writhing live arachnids in a white bucket below. They weren’t dangerous, the woman explained (while Megan translated), since they’d already had their stingers removed. I was too preoccupied to be comforted as I toted off my purchase — a medium-sized, fully dead spider in a clear plastic bag.

We sat at a table and I began using napkins, one in each hand, to extract the tarantula from the bag, careful not to touch it with my bare hands. Megan watched me shudder as my fingers took in the smooth, hard texture of the spider’s legs. “You don’t have to eat it,” she said. But in fact I did: I’d been psyching myself up for weeks and I wasn’t about to back down now. Slowly, gingerly, I pulled on one of the legs, tugging it firmly until it separated from the body. “You only have to eat one leg,” I mentally pep-talked myself as I brought the spiny protrusion close to my mouth, opened wide, and chomped down. 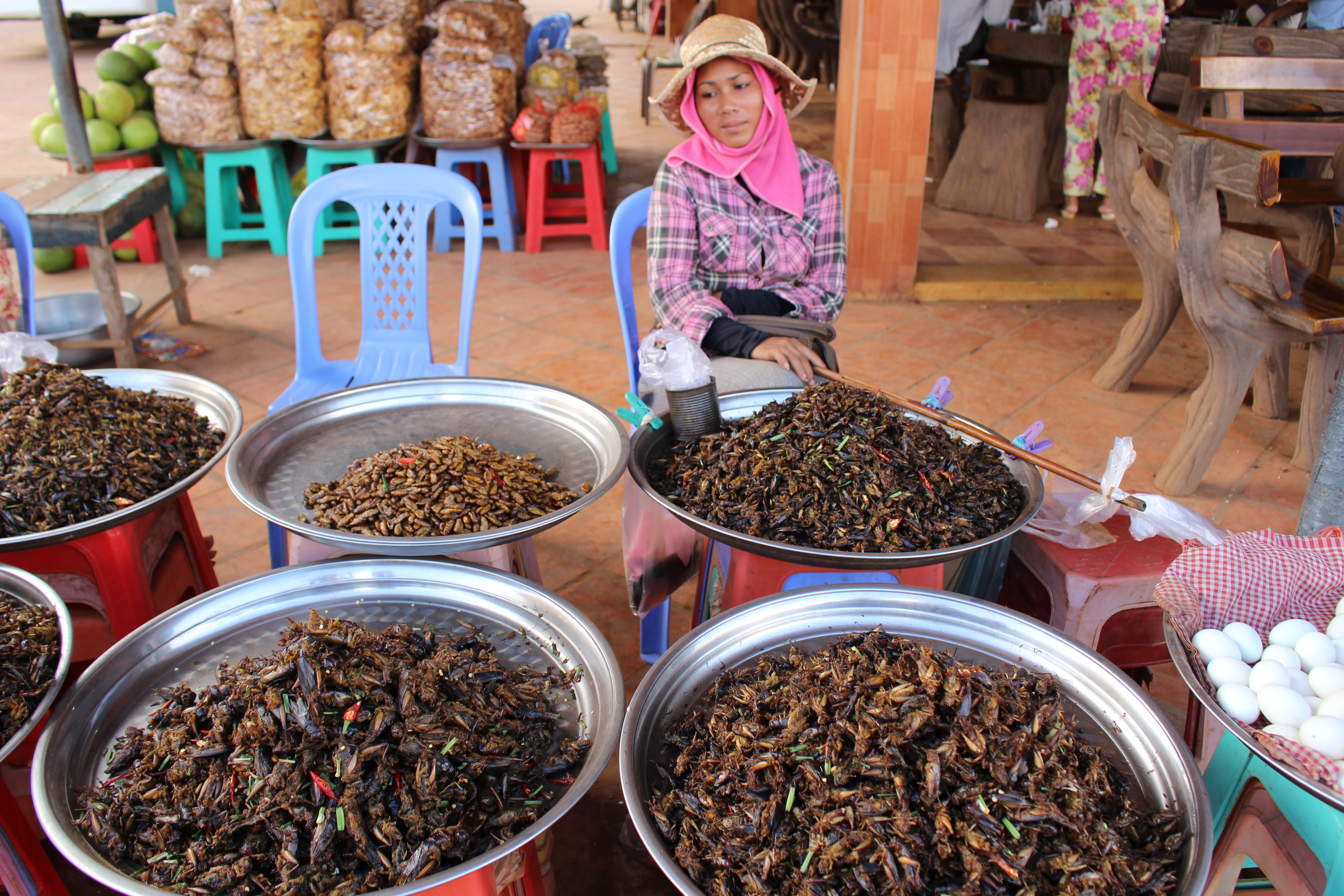 Outdoor insect vending is a common sight in Cambodia.

A few moments later, my eyes popped wide in surprise: This actually tasted good! I took another tentative bite. Yep, tasty. No wonder these things were popular. The spider had been fried in oil seasoned with salt, sugar and MSG, Megan explained, which sounded like a promising way to make most things taste delicious. As I tore off a second leg, I noticed a flaky whitish meat inside. As a few people had mentioned, this really looked and tasted remarkably like soft shell crab, so much so that I had to wonder, with a mild horror, if the creatures were in fact cousins.

After chowing through four or five legs I demurred to try the body, freaked out by Megan’s description of “goopy stuff” inside. I took Megan up on her offer to let me interview the spider vendor while she translated, asking the woman where exactly the spiders came from in “the forest” and how many she usually sold each day (200 to 300). I didn’t learn much of value, but as we chatted, two school-age girls ran over, excited to see foreigners.

One of them, who was probably about 10, seemed intent on impressing me: First she plucked a silkworm from a towering pile intended as snacks, and watched approvingly as I popped it in my mouth, where it tasted creamy and mild. Then came a cricket from the girl’s grubby outstretched hand, whose flavor reminded me of toasted sesame oil. I couldn’t chicken out in front of a 10-year-old kid, so I simply ate what she gave me without giving myself time to think about it. We might have gone on sampling this towering insect buffet, but Megan made our excuses in Khmer and we walked down the road for an ice cream instead. Its cool fruitiness had never been more welcome—at that moment, I really needed a palate cleanser.