We’ve not been shy about our love for the Los Angeles food scene, which we are constantly reminded is one of the most underrated in the world. In the past we’ve dropped lists detailing the city’s top sushi masters and the diverse ethnic food being served around the Staples Center. Los Angeles is an exciting place to eat, and here Tien Nguyen tells us about the great things on the hungry horizon.

1. Redbird
Ever since chef Neal Fraser closed his much-loved Grace Restaurant in 2010, we have been waiting eagerly, if a little impatiently, for his follow-up Redbird. It will finally open this year, in October, on the first floor of the rectory building of the beautiful Vibiana in Downtown. Fraser, who took over the historic building’s operations in 2012 along with partners Amy Knoll Fraser and Bill Chait, hasn’t revealed a whole lot about Redbird’s menu, though the history of the site promises one hell of a setting: the Vibiana opened in 1876 and was L.A.’s first Archdiocese Catholic cathedral; the rectory building was built in the 1930s. Between that and Fraser’s fresh, seasonal cooking, you can bet that we all will be going to church at least once this fall. 214 S. Main Street, Downtown, vibiana.com

2. Jon & Vinny’s
Jon Shook and Vinny Dotolo are busy guys: in addition to running their always packed Animal and Son of a Gun restaurants and supporting Ludo Lefebvre with his two restaurants (Trois Mec and Petit Trois), the duo are working on yet another project, tentatively called Jon & Vinny’s. Specific details are few, though they suggested recently that it will be more “approachable” than their other projects. The space also will house a wine shop (that might deliver!) headed by Director of Operations/Beverage Director Helen Johannesen. Look for it to light up the Fairfax neighborhood sometime (hopefully) before the end of the year. 412 N. Fairfax Avenue, Fairfax

3. Pete’s Cafe
Josef Centeno (Baco Mercat, Bar Ama, Orsa & Winston) is partnering with the folks at Pete’s Cafe to freshen up the 12-year-old restaurant. In addition to leading an interior and exterior makeover, he’ll be creating as-yet unspecified new breakfast, lunch and dinner menus for the restaurant (no word on whether Pete’s beloved blue cheese fries will stay or go). Pete’s, which closed for the reinvention in late August, says it anticipates an October reopening. Centeno’s Downtown empire grows. 400 S. Main Street, Downtown, peteslosangeles.com

4. Ford’s Filling Station
Chef Ben Ford’s Ford’s Filling Station — the first so-called “gastropub” in L.A. (and in the country at that) when it opened in 2006 — closed its Culver City location earlier this year and will reopen this fall in the lobby of the J.W. Marriott at the L.A. Live complex in Downtown. This may very well turn out to be the 2.0 version of the gastropub as well: we hear that this will be an “evolution” of Ford’s Filling Station, “showcasing uncomplicated, seasonal cuisine in an elevated, social setting.” It will be open for breakfast, lunch and dinner, with favorites from the original location carrying over to the new, as well as entirely original dishes. The space itself is what they’re calling “modern organic”: reclaimed brick, leathered upholstery and “sizable trees” mixed with fixtures in brass and orb lighting. 900 W. Olympic Boulevard, Downtown, fordsfillingstation.net

5. Le Comptoir
Until recently, Gary Menes’s Le Comptoir was a roving operation, where he would find a place, pop up and cook up fantastic multi-course, very seasonal, very vegetable-focused dishes for a few weeks at a clip. He’s now moving his entire operation into a much more permanent spot at the Hotel Normandie in Koreatown, which is aiming for an October debut. Once Le Comptoir opens, there might be no better place in town to eat your vegetables. 605 S. Normandie Avenue, Koreatown, lecomptoirla.com

6. Updates at Grand Central Market
The revitalization of Grand Central Market continues this fall with The Oyster Gourmet Seafood Bar, which will be located near G&B Coffee on the Hill Street side of the market. There isn’t too much information yet about what owner and Master Escallier Christophe Happillon has in store, but we’ll probably see fresh oysters with wines to pair. The Oyster Gourmet is hardly the last of the new wave of folks to move into the market: a ramen stall by the Eggslut crew is coming soon. 317 S. Broadway, Downtown, grandcentralmarket.com

7. Belcampo Meat Co.
Belcampo, the famed vertically integrated meat company based in Northern California, opened its first L.A. outpost at Grand Central Market in March. A second location will open in Santa Monica later this fall. A monthlong preview of the Santa Monica kitchen was held in May; back then, you could have have had dishes like beef heart skewers topped with chimichurri, beef carpaccio and pesto and its damn good signature cheeseburger and fries fried in tallow. Besides a full kitchen and bar, there will be a full-service butcher counter. 1026 Wilshire Boulevard, Santa Monica, belcampomeatco.com

8. Big Gay Ice Cream
After letting loose their Salty Pimps onto the streets of L.A. with two pop-up ice-cream trucks in 2012 and 2013, Douglas Quint and Bryan Petroff will open an L.A. outpost of their Big Gay Ice Cream shop in Downtown, in the old Anson’s Sandwiches space just around the corner from Alma. The New York–based ice creamery is known, of course, for its terrific ice cream and soft serve with names you don’t soon forget (said Salty Pimp, the Bea Arthur, etc.), all of which will be available at the L.A. shop. Big Gay L.A. was actually slated to be open by now, but various permitting issues pushed the anticipated opening date to late September/early October. At 1,500 square feet, this will be the biggest Big Gay yet. We can’t wait. 124 West 9th Street, Downtown, biggayicecream.com 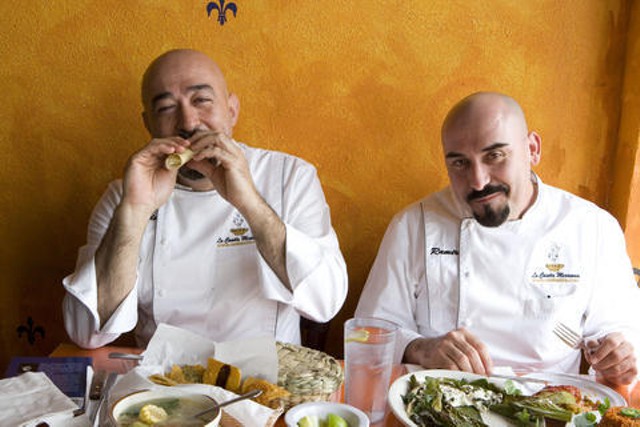 9. Mexicano & Flautas
Jaime Del Campo and Ramiro Arzivu, the chefs and owners of one of the best Mexican eateries in the city, La Casita Mexicana, have two spots planned at the Baldwin Hills Crenshaw Plaza this October. Mexicano will feature their take on classics from their hometown of Jalisco (ceviches, cochinita pibil, basket tacos); there will be a full bar with an extensive mezcal menu, a main dining room decorated with art from Jalisco and an outdoor patio. Much more informal will be Flautas, in the mall’s food court, where the chefs will serve just flautas (“not to be confused with the ubiquitous taquito,” says the release. Of course not.). The menu will feature a variety of flautas with various toppings and fillings like potato and homemade chorizo flautas topped with tomatoes and chile de arbol sauce, and chicken flautas topped with green mole. To drink, agua frescas and lemonade with chia seeds. 3650 W. Martin Luther King Blvd., Baldwin Hills, baldwinhillscrenshawplaza.com

11. BierBeisl Imbiss
Chef Bernhard Mairinger closed his acclaimed Austrian restaurant BierBeisl in Beverly Hills late last year, but soon you’ll be able to find him Downtown: BierBeisl Imbiss will open this fall in the budding Spring Arcade Building in Downtown’s Historic Core neighborhood. If you’re fluent in German, you’ve probably already guessed that this will be a decidedly more casual spot than the original BierBeisl; for those not: “imbiss” roughly translates to “snack” and is the name for the small fast food stands in train stations and other public spaces throughout Germany. The menu, then, will focus on Austrian street food, which will indeed include those sausages. There also will be a bakery (fresh Viennese pastries!), bar and outdoor patio. 541 S. Spring Street, Downtown, bierbeisl-imbiss.com

12. Stir Market
Jet Tila is chef and partner of Stir Market, which, according to press materials, is “a modern California take on the classic European food hall experience.” The 4,000-square-foot space on Beverly Boulevard will have a variety of food stalls, including a “European Rotisserie and expo kitchen,” fare available to go, an artisan bakery, an espresso bar and a wine and craft beer bar. The reinvention of the food halls is apparently becoming a thing (see: the transformation of Grand Central Market, the up and coming Spring Arcade building, the impending Eataly), and this one should fit the Beverly neighborhood nicely. 7475 Beverly Boulevard, Mid-City, stirmarket.com