At 7:30 a.m. on a sodden Friday earlier this summer, a group of pork enthusiasts convened blearily at Ducks Eatery in New York’s East Village. Each person had a different reason for crawling out of bed at this unreasonable hour to throw back potent cold-brew coffee and talk about pig.

Chef-owner Will Horowitz owns the place and had ordered the 30-pound Berkshire suckling from Fossil Farms in New Jersey; Ducks chef-de-cuisine Jonathan Botta is an old hand at barbecue thanks to his North Carolina upbringing (with his help, the restaurant has won awards for its Asian-leaning brisket). I was there to document the whole thing, and chow down, of course — though that would happen in the afternoon.

And then were two guys from Papua New Guinea: Fabian Paino, an internationally known master wood carver who hails from Lagenia Village on the coast and is therefore accustomed only to warm weather, shivered in his flannel shirt and baseball cap. Only one of the group, Mundiya Kepanga, a Huli tribesman from a cool, mountainous part of the country, was comfortable. In a grass skirt and bare torso.

If you’re trying to place Papua New Guinea, it’s the Pacific Island nation that’s not far from Australia, and which has appeared in the international news most recently (in my memory) for lurid stories about suspected witches being burned alive. Like this year, not in 1692. If anyplace needs good press, it’s PNG, which is why I had been surprised-but-not-that-surprised to get an email from its tourism board a few weeks earlier, inviting me to a luncheon at a PNG “pop-up village” and to the pig roast.

The luncheon the day before had unfolded a little bit like that iconic Tom Wolfe piece A Party at Lenny’s, which satirizes a Black Panther fundraiser held in 1970 for a crowd of white liberals at the Upper West Side home of composer Leonard Bernstein. The two New Guineans had appeared in full tribal dress for a group of mostly older, and mostly bespectacled New Yorkers — who clapped graciously at each presentation and laughed appreciatively at each of Kepanga’s jokes, which were largely at the expense of his French translator.

But today was all about pig, and that, even more than Franco-bashing, seemed capable of bringing together a group of people from wildly disparate backgrounds. Our common cause happened to be splayed on the butcher block counter near Ducks’ in-house wood smoker awaiting trussing and a sprinkling of curry leaves, having already been rubbed with garlic, cilantro, bay leaves and fish and soy sauces. Unlike the luncheon, this felt natural — everyone spoke the language of pig. And spoke, they did: The guys from New Guinea explained the rituals of pig-roasting in their respective villages. Paino described the way men collect stones, build a wood fire, wrap the pig in banana leaves and squeeze coconut milk over it, then let it steam on the fire-heated stones.

Kepanga related through his translator how everyone in his village gets a different task: Some men are in charge of killing and cleaning the animal (the intestines go to women to be made into sausage). Others chop down trees to harvest long branches that are used to heat up stones. The whole thing is served on a bed of banana leaves, with vegetables on the bottom and pig on top, letting its juices drip on everything else.

There was more, too. Kepanga is really chatty when he gets going, which is probably why he’s a sort of national character and PNG celebrity after appearances in several documentaries, including one focused on French cabaret dancers. I haven’t seen the movie, but the DVD cover is priceless. 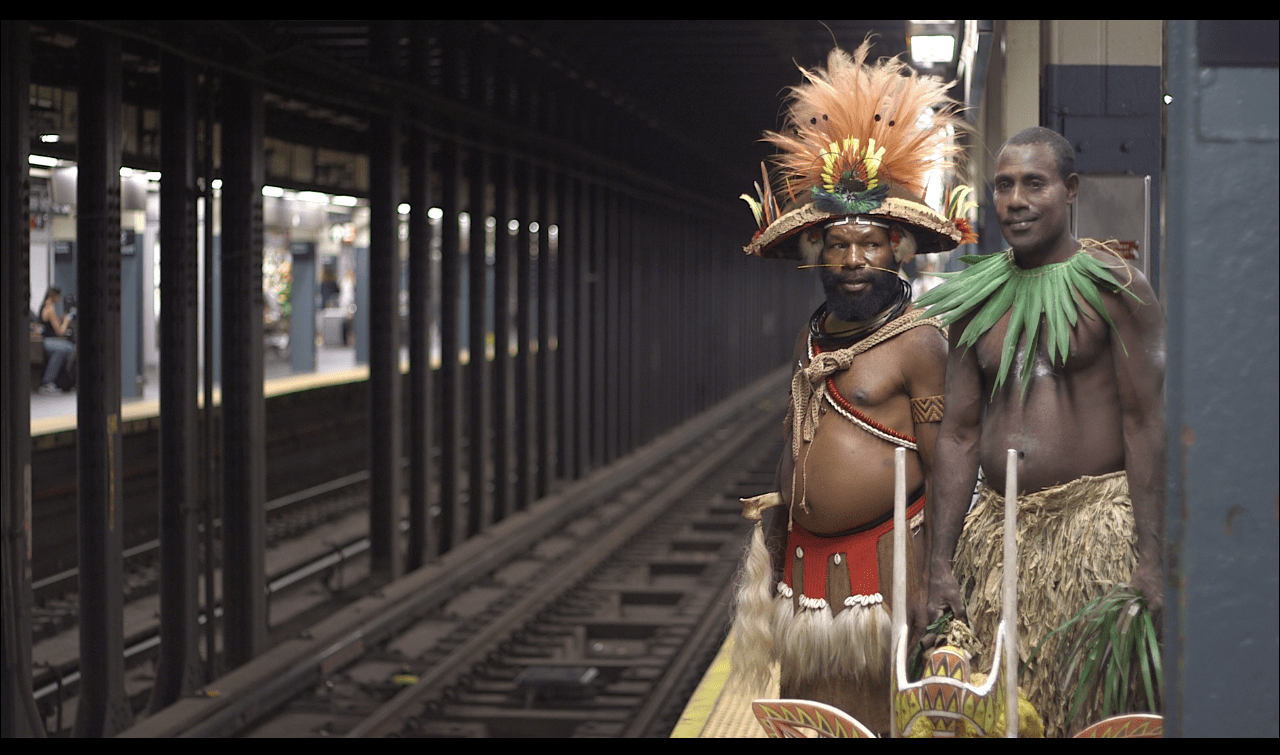 Mundiya Kepanga (left) and Fabian Paino on the way home from the pig roast.

As Horowitz presented a plate of house-cured ham for everyone to taste (the New Guineans regarded the prosciutto-like consistency skeptically but tried a few slices), Paino remarked that in his village, “There’s a competition to prepare a pig. You must show that you’re a man.” Which prompted Horowitz, who had been listening intently as the guys talk, to mention the Big Apple Barbecue Block Party, where Ed Mitchell goes through something like 200 whole pigs annually. Then he brought out a photo of his great-grandfather, who owned a Jewish delicatessen (no pigs there, but similar in spirit). The guys regard the black-and-white image, nodding their heads.

“Food is not only food,” Paino says. “It must follow the customs; it makes the community stronger.” Kepanga chimed in that there’s a big difference in eating customs between the U.S. and where he’s from. “Sharing is part of the process,” he explains. “It’s not a pig for one person or one family. When you’re cooking, the smell travels around the village and everyone knows.”

Later that afternoon we convene for our own hybrid cultural pig-out, and it’s just like Kepanga described: The smell has traveled around the (East) Village, or at least down East 12th Street, and, as we spread banana leaves on some pushed-together sidewalk tables and lay out the whole pig (which had been smoked over oak for a few hours then wrapped in banana leaves for a steam treatment), an honest-to-goodness crowd gathers on the sidewalk.

New Yorkers, that seemingly unshockable group, appear flabbergasted at the sight of what’s unfolding before them. They stand around watching our motley crew tear into a pig and some sweet potatoes and corn, and they have no idea what’s going on or why this is happening. We end up answering a lot of questions from curious passerby.

In between the queries, we bite into ears, and legs, and gnaw on sweet potatoes and corn and chat some more. Kepanga’s translator couldn’t make the feast, but that didn’t stop the tribesman from telling me in surprisingly good English, as I shove pieces of grease-flecked meat into my mouth: “You eat like a Papua New Guinea woman.” I laugh at what I’ve decided is (hopefully) a compliment, and grab another chunk of meat.