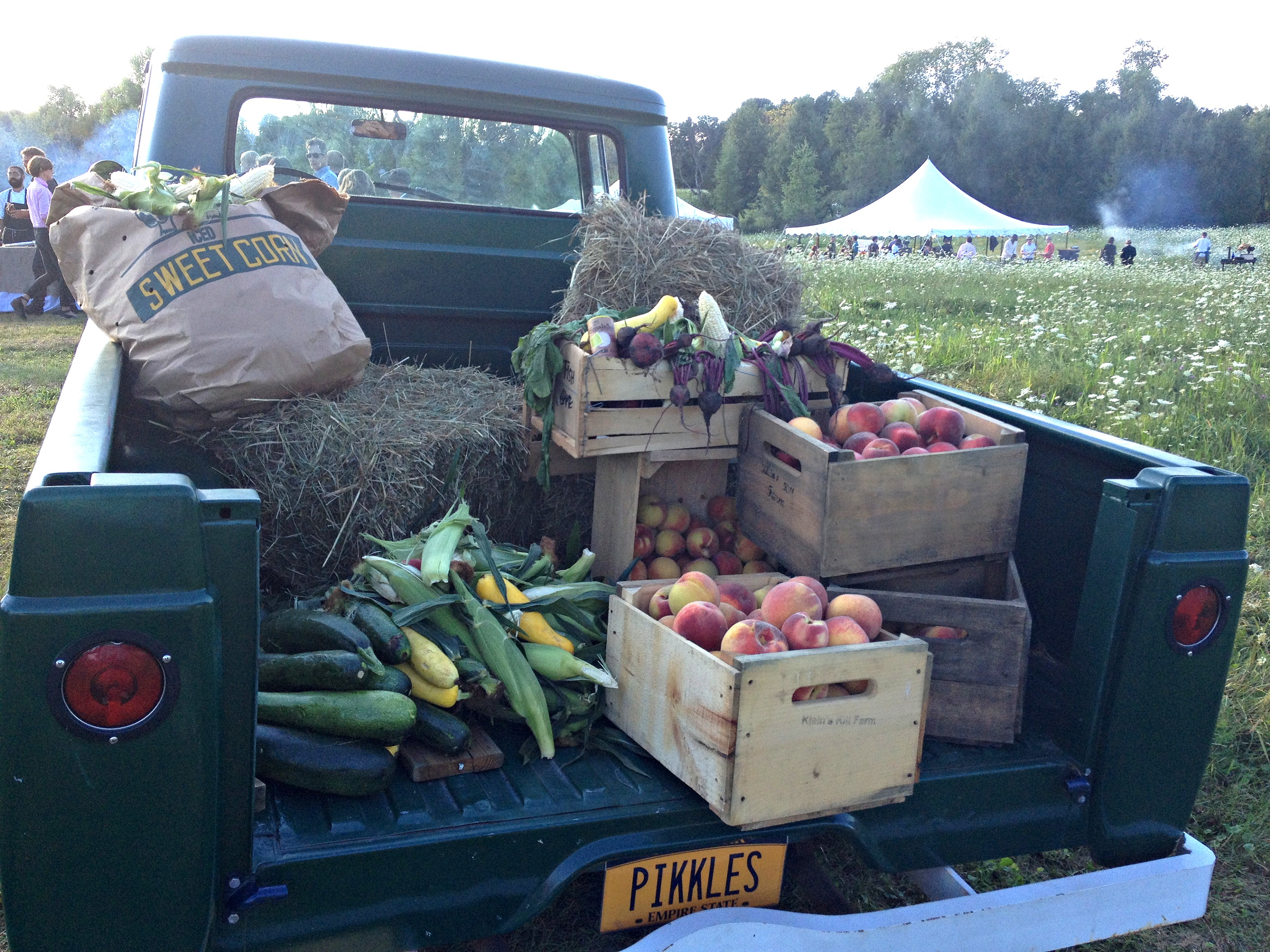 I’m sure that chefs find a certain charm in cooking in a crowded, sweaty kitchen as the orders race in, but after watching some of North America’s culinary masterminds at play in a verdant rolling field in New York’s Hudson Valley yesterday, I’d guarantee that a live fire and an open sky is a preferable setting. The Northern Chefs’ Alliance’s “Play With Fire,” a benefit for the FarmOn! Foundation, took place on Fish & Game Farm, with U.S.-based chefs Sean Brock, April Bloomfield, Zakary Pelaccio, Matt Jennings and Jamie Bissonnette each teamed with a Canadian counterpart, cooking over licks of flames and raw, searing heat.

There was Brock, hunched over trays of green, white and red veggies, gray embers glowing below. Bissonnette’s station afforded him a scenic view of his makeshift chicken rotisserie, while Pelaccio and his partners in crime Jori Jayne Emde and Kevin Pomplun (of the Fish & Game restaurant that takes its name from the farm), teamed with Toronto’s Matty Matheson to corn brine and smoke a whole 200-plus-pound pig. Matheson served the pork on a local flour roti with burnt red cabbage and habanero water buffalo yogurt. It was the best taco-esque thing I’ve eaten all year.

A few minutes earlier, Bloomfield had taken extra care to season a pot of whelks with tomatoes, peppers and corn spooned over a piece of grilled baguette that’d been rubbed with garlic. As she re-salted the dish, a fan of the chef’s told her that he was glad that she’d taken on a seafood dish rather than pork, and indeed, this bright, flavorful shellfish and veggie mélange showcased Bloomfield’s impressive range. Meanwhile, her Canuck counterpart, Jeremy Charles of Raymonds in Newfoundland, plated a snow crab salad with sea greens, smoked uni butter, potatoes and corn.

Now I know that eating food cooked by superior chefs in a stunning setting automatically enhances one’s experience with flavor, perhaps unfairly, but these preparations were inspired.

Also inspired? Each of the five stations featured artfully made cocktails; the dessert tent was manned by Modernist Cuisine’s Francisco J. Migoya, who offered caramel ganache truffles scented with tobacco, and raspberry and lemon verbena ice pops; and the band jamming atop a hill surrounded by chicken coops was led by organist John Medeski (of Medeski, Martin & Wood) and featured special guest Amy Helm (the daughter of the late, great Levon Helm).

Here are some more photos from yesterday’s “Play With Fire” (disclosure: Food Republic was a media sponsor of the event). And check out farmon.info for more information about the organization’s efforts to help youth education and community programs.

UPDATE: Over at The New York Times’ T Style blog, Jeff Gordinier files a thoughful piece on the affair as well, with photos by Melanie Dunea.