Kathy Wielech Patterson, a life-long Baltimorean and avid eater, blogs at Minxeats.com. She is the co-author of the restaurant guide,  Food Lovers’ Guide to Baltimore , and the cookbook,  Baltimore Chef’s Table , both written with her husband, Neal. Here, she drops some knowledge about her home state’s oyster scene.

Think of Maryland and you’ll probably think crabs. And while we’re certainly fond of our little blue crustacean friends, Marylanders also love oysters. We love them battered and fried, baked in a classic spinach-topped Rockefeller, and most of all, raw, slurped from their shells with a squeeze of lemon or a piquant mignonette. To a Marylander, there’s almost nothing better than a cold beer and a selection of briny bivalves for our delectation. Not long ago, this meant enjoying oysters from Nova Scotia, New England and as far away as Washington state; recently, however, we’ve enjoyed a greater availability of oysters raised right here in Maryland.

Maryland sits atop the Chesapeake Bay, which slashes through the easternmost part of the state and, to the South, forms much of Virginia’s coastline. The Bay is an estuary, where fresh river water meets salt water from the Atlantic Ocean, and is the largest such body in the United States, covering 4,479 square miles. Myriad species of shellfish, as well as other plants and animals, are found within the Chesapeake’s brackish waters. The name Chesapeake comes from the Algonquin word “chesepiook,” meaning “great shellfish bay.” Among the most popular critters found in the Bay are Crassotrea virginica, otherwise known as the eastern oyster.

Once upon a time, there were lots and lots of those tasty mollusks in the Chesapeake, as evidenced by the ancient middens – piles of discarded oyster shells – found along the coastline. Thousands of years ago, the oyster was a regular part of the Native Americans’ diet, and when the Europeans arrived, they, too, gobbled them up. At first, the oysters were harvested by hand, but in the 1800s, people turned to dredging to gather larger quantities. Canneries opened along the bay to deal with the popular demand, processing millions of oysters that were then shipped to eager palates all over the country. At one point, the Bay produced almost half of the world’s supply of oysters. Eventually, the greedy gourmets ate almost all of the oysters. (And this is why we can’t have nice things.)

So now we have to make more. This isn’t as difficult as it may seem. The early Romans farmed oysters, and later the French did the same. In the 1800s, tons of Chesapeake Bay oyster spat (baby oysters) were shipped to oyster farms in New York, because they ate all of their oysters, too. So what is oyster farming and how does one do it?

The state of Maryland realizes that it’s important to have not only oysters to eat, but also oysters to keep the bay clean. Oysters are nature’s filters, sucking in and spitting out around fifty gallons of water per day, and that’s just one oyster! While that sounds impressive, the Chesapeake holds about 18 trillion gallons of water and is continually polluted by the industry along its shores. You do the math. There is hope, however, and its name is Aquaculture! Twenty years ago, the Oyster Recovery Partnership started large-scale restoration of the Bay’s oyster population, planting nearly four billion oysters on 1,500 acres of reefs. The ORP also gets citizens involved through a program called Marylanders Grow Oysters. Individuals who live on the water are encouraged to “foster” young oysters in cages under their private piers. These oysters are for restoration purposes, but if waterfront property owners want to grow oysters for personal consumption, a company called Johnny Oyster Seed, in St. Leonard, Maryland, makes it easy to do just that by equipping them with all the tools they need to create an effective “oyster garden,” including cages and seed oysters. And then there are commercial oyster farms, which raise thousands of spats into delicious adults ready for eating.

Back to the “oysters are nature’s filters” bit from earlier. Oysters eat algae, which is in plentiful supply in the Bay. They suck in the water, keep the algae and spit the rest out. This constant flow of water through the oyster itself flavors the creature, a bit like poaching a protein in wine or stock. Saltier waters produce a more pronounced salinity, likewise vegetation in the water adds to the oysters’ flavor. So while oysters come from the Chesapeake in general, those raised in different parts of the bay have their own flavor profiles. As with grapes and the all-important terroir, oysters have theirs, which has been called merroir. The huge size of the Bay offers Maryland growers a choice of merroir; the Choptank River on Maryland’s Eastern Shore, the Patuxent and Potomac Rivers and St. Jerome Creek on the Western Shore and Barren and Hooper’s Islands, in the Bay itself, have all proven to be ideal places for producing flavorful oysters. 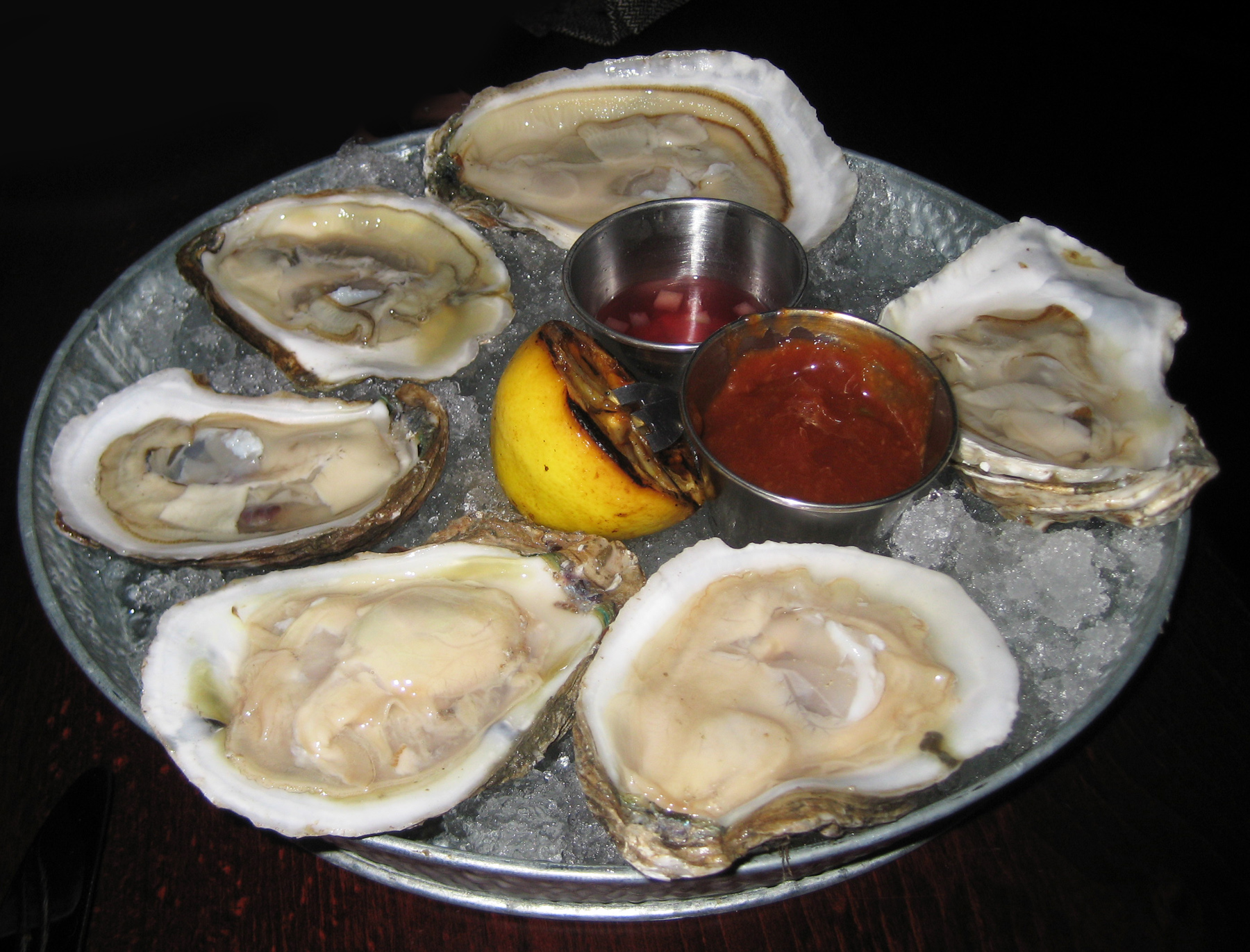 Marylanders enjoy nothing more than slurping fresh oysters – with lemon or mignonette – from their shells.

Some farmers choose to grow their oysters in cages raised off the river bottom, while others raise them on shallow floating reefs. The Choptank Oyster Company, based in Cambridge, Maryland, prefers to keep its Choptank Sweet oysters close to the surface. They say it keeps them free of grit, and the proximity to sunlight means more algae to eat. They also grow quickly, taking only 18-24 months to reach the market minimum three inches. Choptank cleans its oysters of barnacles and whatnot by putting them through a tumbler a couple times during their lifespan. The resulting creature is buttery-flavored and lightly salty, perfect for eating raw. They also allow their oysters to spawn naturally, which introduces billions of oyster larvae into the waterway and helps to repopulate the wild supply.

Barren Island Oysters are grown in open waters bordered by the Chesapeake to the West and the Blackwater National Wildlife Refuge to the East, which protects them from run-off and pollution. Their oysters, grown in cages raised off the bottom of the bay, are also tumbled periodically. This not only cleans the oysters but chips the shells, causing the creature to do some repair work. This produces a stronger shell and a deeper cup, both of which make it easier for the shucker to get to the creamy and buttery oyster meat inside.

Hollywood Oysters come from an area near the mouth of the Patuxent River. They use beds raised up off the sandy bottom, which grower Tal Petty says had little fauna to speak of. “It’s amazing to see, but when you put a cage of oysters in the water…it attracts seaweed, fish and larger feeder creatures like crabs, eel and turtles. Imagine a thousand cages spread out over several acres. It becomes a moveable reef that is amazing in the biodiversity it attracts. Oh, and those crabs sneak an oyster for dinner. Everyone else is in there for the ecosystem benefits.” He grows two oysters: the namesake Hollywood is harvested in the Hog Neck Creek, and the Sweet Jesus come from the river proper. Both oysters have a subtle cucumber minerality and a distinctive nutty finish.

Chesapeake Gold Oysters, farmed in Tar Bay, between Barren and Hooper’s Islands, share similarities with other farmed Maryland oysters. They are grown in cages set about six inches off the bottom and are tumbled often during the growing process. Unlike some others, however, Chesapeake Golds do not spawn in the summer. This is because these oysters are triploids; they have three sets of chromosomes, as opposed to the two sets of normal oysters. Not having to put out the energy of spawning means that Chesapeake Golds are fast-growing, and plump and meaty all year. If the idea of having three sets of chromosomes freaks you out, keep in mind that so do bananas, blueberries and seedless watermelons.

A ways down the Bay from the other farms, in St Jerome Creek, we find True Chesapeake Oyster. Managing partner Patrick Hudson says that the creek has “very unique water flow properties. With over 30 miles of shoreline and a mouth of only 150 feet or so, the daily tides generate tremendous waterflow. This waterflow brings ‘new’ water past our oyster beds twice daily at a very rapid rate, the result of which is a very clean oyster that has a deep cup and plump meat.” Because the farm’s location is further South where the water is more brackish, their oyster, the Skinny Dipper, is a bit saltier than oysters grown in the fresher waters of the northern Chesapeake. And the lovely salinity means they taste great when slurped totally naked – no cocktail sauce or mignonette needed!

These and other farms are doing their part to save the Bay and supply our greedy gullets with shellfish. While the majority of their oysters are consumed in the MD/DC area, some farms have been exporting their wares to places like Boston and California. If you’re in Maryland, you can find them at restaurants like Factor’s Row and the Boatyard in Annapolis, Dylan’s Oyster Cellar, Woodberry Kitchen, Thames Street Oyster House and Heavy Seas Alehouse in Baltimore, among others.

Heavy Seas Alehouse typically serves its local oysters on the half shell with a cocktail sauce made with Heavy Seas Gold Ale, lemon and mignonette, but they serve a tasty po’ boy sandwich, too. It’s my favorite way to get a fried oyster fix. Here’s the recipe, courtesy of Executive Chef Matt Seeber and Chef de Cuisine Scott Hines. 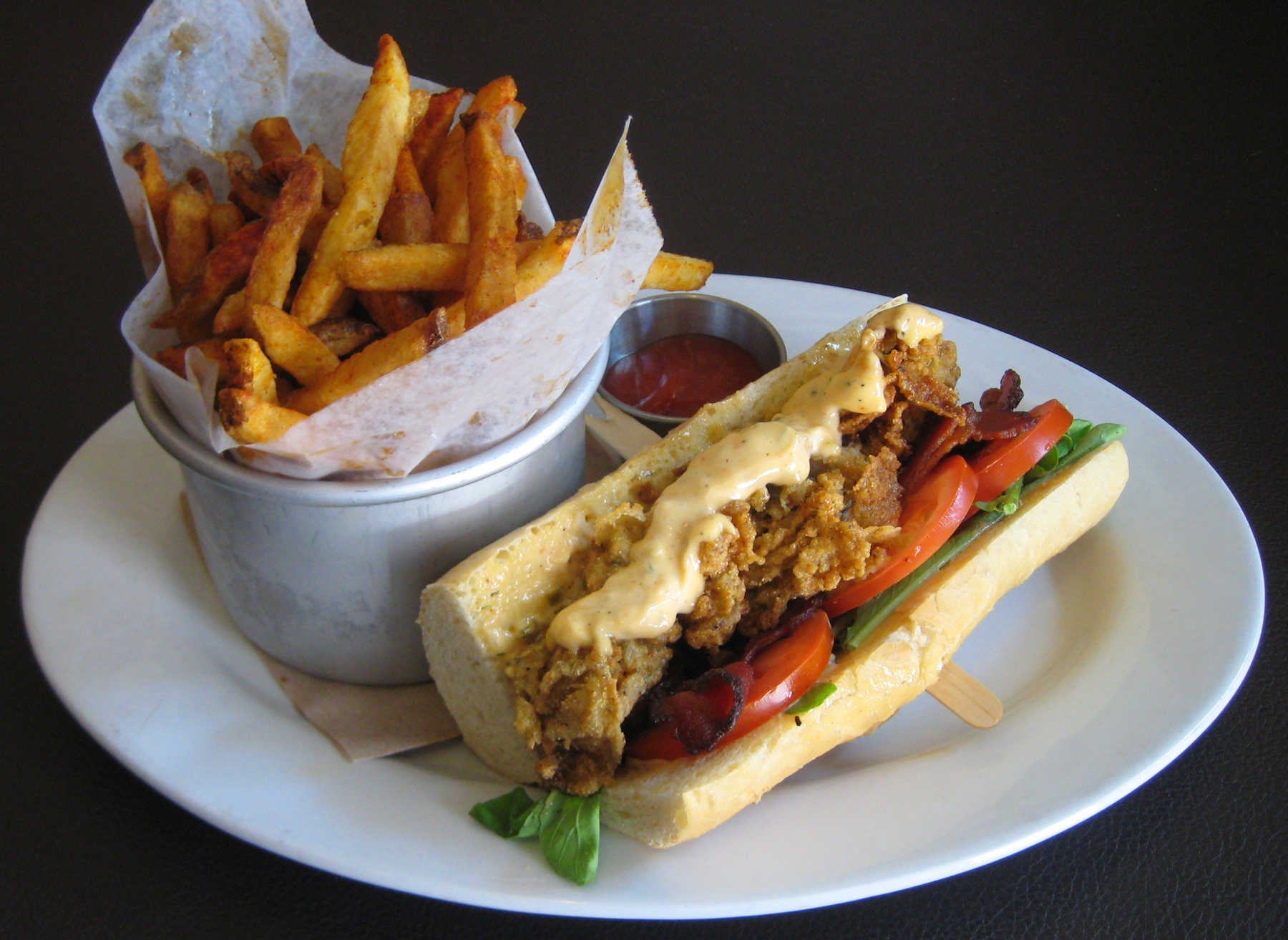 The po’ boy sandwich – seen here from Heavy Seas Alehouse – is the perfect way to get a fried oyster fix.

Directions:
For the oysters:

Try out these oyster recipes on Food Republic: