There are more than 4,000 types of crabs on the planet — the lot of them slippery jerks with little in common beyond claws and a salty-ass disposition toward humans who hope to eat them. Crabbers and cooks around the world have their own techniques for capturing and preparing cranky crustaceans, a canon that includes multiple techniques right here in the United States. Americans have always loved to argue about who’s the best at what. When it comes to serving whole crabs, however, there are no incorrect answers. Everyone’s right, as long as everyone’s eating.

IN THE EAST
The American crab-eating conversation begins with the Chesapeake Bay, our country’s largest estuary. Though blue crabs are available outside the watershed, Marylanders believe their waters produce the best, dwindling populations be damned. (Virginians think this, too, but Marylanders are louder about it.) The preferred mode of preparation in these parts is dousing live guys (or girls) in super-savory, slightly spicy seasoning, like Old Bay or J.O., then quickly steaming with a customizable elixir of vinegar, beer and/or water. Patient eaters then pick ‘em clean, with plenty of Natty Boh and corn on the cob within close proximity. 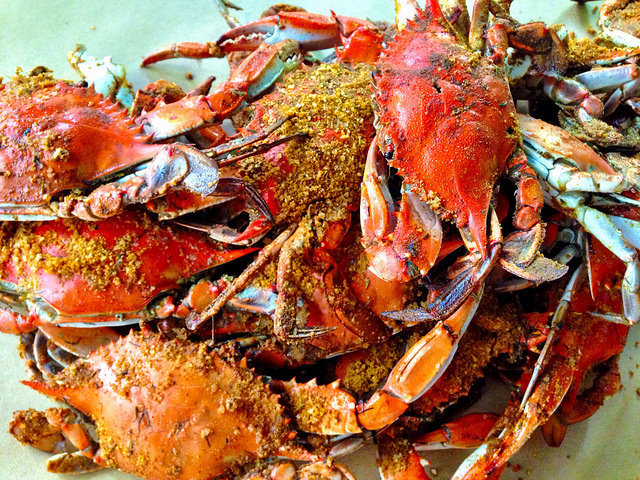 In New York City, events like the annual Hammer & Claws festival recreate this Maryland vibe for Manhattanites, but the state’s crustacean culture stands on its own outside city limits. The Long Island Sound, buffering New York and Connecticut, is HQ for a number of finger-brutalizing species. Long Islanders tend to take their blues steamed, too, seasoned à la Maryland, or flavor-blasted with garlic and butter.

Due north, New England seafood eaters are much more associated with lobster than crabs, but they can still crack carapaces with the best of them. Blue crabs are caught along the Massachusetts coast out to Cape Cod, while Jonah crabs kick around further north. The latter type is known for its heft and distinct black pincher markings, and not for any eerie resemblances to Academy Award nominee Jonah Hill. Seafood shacks up here variously steam, boil or fire-grill their many-legged goods; Jonahs are sought after for their claw meat, though they can be enjoyed intact, too. 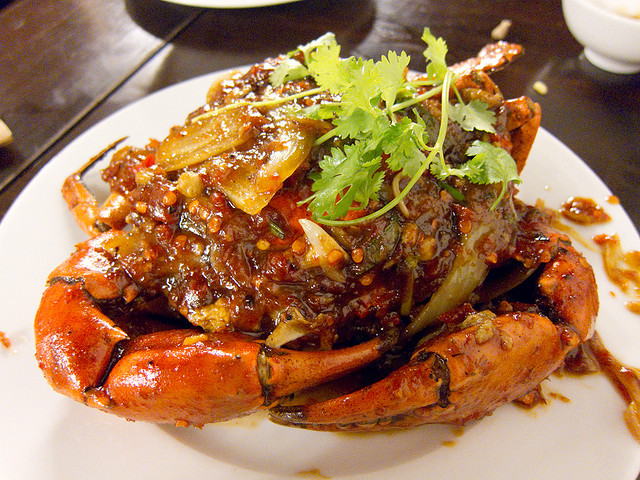 DOWN SOUTH
Given their access to the coastal bounty, North and South Carolina crabbers are fond of cooking whole crabs in a manner similar to their northern neighbors, though some prefer to shell and clean them prior to steaming. Georgia’s fond of the blues, too. But, once you hit the Florida border, stone crabs, loved for their comely claws just like their cousin Jonah, enter the conversation; so do deep-water, high-yield golden crabs.

You really have to curl westward along the Gulf Coast to uncover more of America’s distinctive whole-crab preps. In Louisiana, for example, the boiling tradition is just as beloved as a classic mid-Atlantic steambath. Store-bought crab-boil seasoning bags, which share many common ingredients with go-tos like Old Bay (cayenne, coriander, mustard seed, etc.), hit big pots of water along with common stock additions like garlic, celery and onions. As the liquid gets rolling, the crabs are dropped in, along with bedfellows like head-on shrimp, andouille, potatoes, corn and halved lemons.

Whole crab stylings aren’t restricted to communal bayou cooking down here, either. The large Vietnamese populations in and around cities like Houston and New Orleans take advantage of local species, developing stateside variations on native dishes. This extends heavily into the crab world. Cua rang muoi, salt-and-pepper crab dredged in flour and dry spices and rapidly wok-fried, is executed with hard-shell blues pulled out of the Gulf. For cua rang me, the tamarind style that compares to the inimitable Singapore chili crab, many Viet chefs prefer the lumbering Dungeness, which happens to be the crustacean toast of the Pacific. 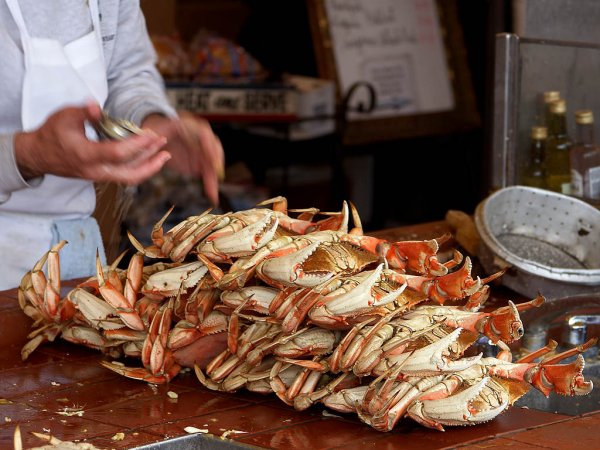 Dungeness crabs are coveted on the West Coast from late spring to early summer.

OUT WEST
Thanks to reality shows and all-you-can-eat seafood buffets, Alaskan king crab and snow crab might be the most recognizable varieties coming from this side of the country. But, since they’re enormous and somewhat resemble the aliens from Starship Troopers, they’re not frequently served in one piece. Dungeness crabs are. Named for a small fishing village on the northeast corner of the Washington’s Olympic Peninsula (not Tony Dungy), they look like exaggerated Emoji representations of a crab, with their weird smiley faces. Don’t let that deter you from eating their sweet meat. Simply steamed “whole cooks” are available all over, and taste best in late spring and early summer. But, more ornate preparations are out here on the Left Coast, too. Southeast Asian kitchens in Washington and California mess around with roasted whole crabs infused with garlic, butter and black pepper, or simmered with wine-based sauces for a “drunken” Dungy experience.

WHAT ELSE TO LOOK FOR
Korean gejang are raw crabs marinated in a unique soy-based brine and served with rice. Brazilian siri recheado features boiled crabs picked clean, then re-stuffed with a herbaceous mixture of the meat and oven-baked till crispy. Kakrar jhaal is crab stewed in a bold Bengali curry sauce with tomatoes. Central Thai-style crab karees lean on coconut milk, oyster sauce, pepper and lime. And,  Szechuan-style dry pepper crab, first deep-fried, then wok-fried in spicy stock with sliced chilies.