New York City might just have the most exciting barbecue scene in the United States. There, I said it. Friends in Texas and North Carolina, you know where to send the hate mail. But hear me out. Between the New York Times restaurant critic Pete Wells announcing the arrival of “Big Time Barbecue” in his two-star review of Mighty Quinn’s and last week’s slow-smoked feature in Food Republic by Chris Shott, it’s obvious that something special is happening in the ventilated basements and back alleyways of the city of just over 8 million — which, if you subtract vegetarians, fussy eaters and bores, leaves about 7.75 million barbecue fanboys and girls living here. Honestly, who doesn’t like a bit of barbecue? A rack of dry-rubbed ribs, or a smoked turkey leg, or a Texas-style sausage link shooting deadly grease bullets (seriously, watch your eyes with those things).

For fans of barbecue, NYC offers the best of many worlds. There are authentic versions of regional classics like pulled pork topped with a burst of vinegar sauce, or smoked beef ribs like they do it in Lockhart, Texas. And then there are NYC-specific, hybridized, deliciously left-field items like Caribbean jerk ribs and smoked pork belly tacos. With that, here our eight favorite places:

BrisketTown
“I think this renaissance in barbecue is very analogous to everything that’s happening in food culture,” says Daniel Delaney, the owner of BrisketTown. The Internet made Delaney a bit of a smoked meat folk hero — he famously sold 3,400 pounds of brisket in advance of a 2012 pop-up called the Brisketlab. But as we know from Lolcats, web fame only lasts so long. His legacy is established at South Williamsburg brick and mortar specializing in the Hill Country-styled brisket — peppery, laden with ribbons of smokey fat — and beef sausage. There’s a reputable chili made with Hatch and Guajillo peppers and a nice selection of pies. But, as the name suggests, there really is only one reason to visit. 359 Bedford Ave, Brooklyn, NY, 11211, delaneybbq.com

Hometown Barbecue
Located in Brooklyn’s famous industrial waterfront/high-quality restaurant destination Red Hook, Hometown is not a mere barbecue stand or pit. It’s a barbecue hall. It’s huge, as is the lineup of barbecue from all parts of the globe — there’s pork ribs and beef brisket. A lamb belly báhn mì and jerked Jamaican baby back ribs brings some international flavor. And for dessert it’s an all-Brooklyn affair with Robicelli’s chocolate pudding pie and key lime pie made at nearby Steve’s Authentic. Some hometown love if there was any. 454 Van Brunt St, Brooklyn, NY, 11231 hometownbarbque.com 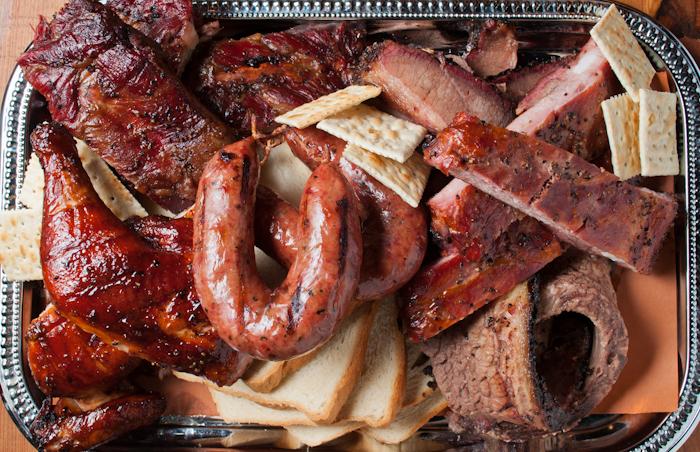 Hill Country
OK. First things first. There is nothing like authentic Texas barbecue, found in the under-populated region outside of Austin. We’re big fans of Texas’ beef-centric barbecue, which might be our favorite in the country. But if you must get your brisket fix outside of Texas, Hill Country is a great place to look. The two behemoth restaurants (one in Chelsea, one in barbecue-starved downtown Brooklyn) is modeled after Kreuz Market in Lockhart, Texas (they even source their sausages from there). They’ve been in big city ‘cue business for seven years and have the smoker straight dialed. Just step up to the plate and order away — by the pound, of course. That is how they do it in Texas. Go with the moist brisket and thank us later. 30 W 26th St, New York, NY, 10010; 345 Adams St, Brooklyn, NY, 11201  hillcountryny.com

John Brown Smokehouse
John Brown is a name you recall from Middle School history class — he was an abolitionist and leader of a bloody Civil War slave uprising that ultimately sent him to the gallows. But let’s talk about barbecue! Specifically the burnt ends and pork ribs coated in a thick, molasses-sweet sauce that this Long Island City pit calls Kansas City in origin. There’s a fine lineup of sandwiches made with the smoked brisket and rib tips, but also lamb sausage and foie gras (that’s a first). The pastrami, too, is downright peachy (it’s smoked with peach wood, after all). Critic Robert Sietsema, who knows a bit about the ‘cue game, says that the sides “don’t suck,” which is an good indication that you should think about ordering them. 10-43 44th Dr, Long Island City, NY, 11101, johnbrownseriousbbq.com

Video: A Visit To Hometown Bar-B-Que In Red Hook, Brooklyn

Dinosaur Bar-B-Que
Dinosaur started in upstate New York as a food truck of sorts. Pitmaster John Stage, a certified badass dude, would haul a 55-gallon drum to Harley rallies and serve smoked ribs and pulled pork to his biker buddies. In 1988, he opened his first full-time restaurant in downtown Syracuse and eventually opened in Harlem in 2004. A great many people have made the pilgrimage uptown for barbecue that doesn’t align with a certain region; it’s more utility player barbecue — with dry rubbed ribs and Carolina-style pulled pork. And don’t sleep on the barbecued half chicken plate. 700 W 125th St., New York, NY; 604 Union St., Brooklyn, NY; dinosaurbarbque.com

Fette Sau
Some people have forgotten about Fette Sau, a Williamsburg urban barbecue pioneer. Well, most people forget about their night at Fette Sau after sampling from the restaurant’s large bourbon stash. What we do recall is some wonderful Berkshire pork shoulder and pork ribs that can sometimes be dried out under a blazing heat lamp (you order from a deli case). Pay attention, especially during off-hours. When it’s around, the pastrami is just really good. We aren’t writing much about sides in this story, but the broccoli salad and German-style potato salad are really worth trying. 354 Metropolitan Ave., Brooklyn, NY 11211, fettesaubbq.com

Fletcher’s
After building a successful New York City advertising agency, Bill Fletcher sold his share to a partner to focus on establishing a “better work-life balance.” Apparently, work-life balance also includes mastering the art of slow-cooking various cuts of meat in the smoke of blistering maple and red oak logs. With his newly opened barbecue restaurant in the white-hot Brooklyn food neighborhood known as Gowanus, the former ad man has partnered with one of the best in the business. Matt Fisher formerly ran the smokers at Wildwood and R.U.B (Righteous Urban Barbecue) before hooking up in 2012. On the menu are barbecue classics like St. Louis-style ribs and Texas-style brisket, as well as atypical ‘cue like char siu pork steak. 433 3rd Ave, Brooklyn, NY 11215, fletchersbklyn.com

Mighty Quinn’s
Top-notch BBQ right smack in the middle of Manhattan’s East Village? Yes, this is correct. Mighty Quinn’s dishes out tender brisket and fall-off-the-bone spare ribs in a modest setting, complete with a counter and both individual and communal wooden tables. The newcomer has even earned the praise of legendary pitmaster Myron Mixon. The Brontosaurus Rib is a force to be reckoned with (bet ya can’t finish it) and sides are definitely not overlooked here – we recommend the sweet potato casserole with maple and pecans and the burnt-end baked beans. 103 2nd Avenue, New York, NY 10003, mightyquinnsbbq.com