Tony Gemignani has one jealousy-inducing resume. It’s full of phrases like “World Champion” and “Best in America.” And get this: it all relates to pizza. Tony has won a total of 11 world titles in pizza making/tossing – yes, such competitions do exist – and was named the U.S. Ambassador of Neapolitan Pizza by the city of Naples, a title given to only three people in the world. His eponymous pizzeria in San Francisco was just crowned the best in the United States by Forbes. In addition to running seven restaurants across the country, Tony has written three pizza-centric books and operates a prestigious pizza school in Italy, with over 20 branches worldwide. Jealousy-inducing, indeed! We sat down with Tony to talk all things pizza. Be sure to scroll down for his master dough recipe.

What are a few general tips to keep in mind when making pizza at home?
When using a home oven, you should use high-gluten, high-protein flour (like King Arthur Sir Lancelot), use a pizza stone or baking steel and mature your dough for at least 24 hours. This makes the dough lighter and more flavorful and also makes the crust easier to digest. Also, use whole-milk mozzarella.

What are some common mistakes that people make at home?
Most home cooks use the wrong type of flour to make their dough and will use too much water or water that is too hot. I recommend a cold-rise method to make dough. This means a longer rise, but it’ll make a better pizza. Another common problem is using too many toppings on the pizza – cooking is about balance.

What component is most important when making pizza?
The dough, sauce and cheese — that’s the foundation, so it’s important to use quality ingredients. In my new cookbook coming out in October, The Pizza Bible, I have a section where I recommend which ingredients are best and which equipment to use, because it’s important. 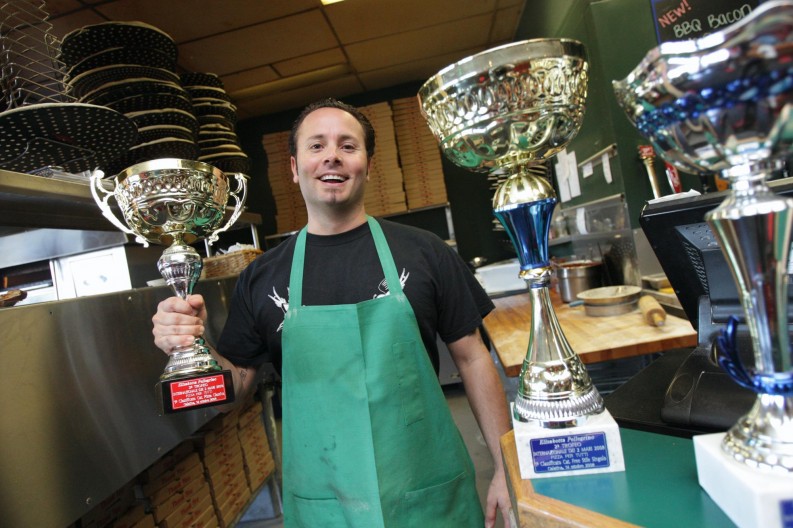 Tony Gemignani has racked up an impressive number of trophies related to pizza making and tossing.

How does one become the world’s best pizza tosser? And what does this mean exactly?
Lots of practice! Like a Harlem Globetrotter does tricks with a ball, I do tricks with pizza. I thought winning in pizza acrobatics was the hardest thing until I competed in Naples for cooking – and I won Best Pizza in the World. From what the Italians say, a win like that is once in a lifetime. I’ve won three more Best Pizza cooking titles since then and have 11 world titles. Well, I actually have 14 but three of them were “international” championships and not titled “world,” so we’ll say 11! It’s been hard work, but super cool.

What’s the coolest experience you’ve had/person you’ve met as World Pizza Champ?
Being on The Tonight Show with Jay Leno. I was 23 – so young, eager and excited. I sat on the couch as a guest and said to myself that I would be back one day.

Reprinted with permission from The Pizza Bible

Servings: Enough dough for one pizza

This is what I’d call the quintessential American pizza dough, inspired by New York–style pizza: medium thin, satisfyingly chewy and the ideal companion to mozzarella, tomato sauce and the pizza toppings Americans love best, from pepperoni and sausage to olives, mushrooms and other vegetables. It’s the dough I teach first to new students, and the one I recommend experimenting with because it’s so versatile and user-friendly.

Tiga is my slightly more hydrated version of a classic biga starter, which is usually between 50 and 60 percent water. This “Tony’s biga,” which I call “Tiga,” has 70 percent hydration.