Any chocoholic or sweets-loving consumer has probably experienced at least one run-in with a $14 rectangle of bean-to-bar, raw, living, organic or all-natural chocolate. The stuff is widely available in many health shops and gourmet food stores. But, despite the hype surrounding the raw chocolate craze, many people still don’t know what raw chocolate really is, what makes these bars supposedly good for you or why they cost so much money. Then, you get into the numbers game. What’s better? A 73-percent raw and roasted? Or, a 50-percent split? After talking to experts in the industry, we’re beginning to get a pretty good handle on this foodstuff. Here’s what we’ve learned:

What Is Raw Chocolate?
The short answer: raw chocolate is made from cacao beans that have not been brought above a temperature of around 140 degrees. This means they shouldn’t bake, boil, melt or even sit in the hot sun too long — lest the components that keep the food raw will cook and change the chemical makeup of the product. That said, in the raw-food community, there is a lot of gray area on just how uncooked something has to be to still legitimately carry the raw label. And, though the 140-degree mark is a common standard, it’s not a set-in-stone figure.

“Purists have emotional attachment to the numbers,” says Daniel Sklaar of Fine and Raw, a hand-crafted chocolate shop in Brooklyn. “There is very little research out there and it’s a world of opinions.” At his Bushwick shop, Sklaar keeps the chocolate at 150 degrees and below, a temperature he came up with after experimenting with roasting nuts. “I got together with a compadre of mine and we did some investigation. And, our premise was, if you could sprout something, then it’s still a living thing.”  Since the nuts spouted at 150 degrees, the chocolatier applied these numbers to his fermented cacao beans.

The process to keep a product raw remains very delicate, and not everyone buys into the notion that all the raw-labeled foodstuffs out there are really, truly raw. Kristen Hard, chocolate maker and founder of Cacao Atlanta Chocolate Co., says no real set of laws exist behind the raw claim, and many places can’t truly make a raw chocolate. “I feel that it is a controversial topic with no clear answer and, the U.S. doesn’t have a lot of regulations on the world of chocolate,” she says. “I don’t believe there is enough understanding in what raw is, and my feeling is that raw chocolate cannot exist if it goes through fermentation and sun drying.”

So, is fermented chocolate raw? That leads us to the next aspect of this food.

The Fermentation Debate
To handle cacao, all the beans are cleaned and then fermented, a process that heats them up naturally and in a way “cooks” the beans while still allowing them to be “living” things. But, not everyone agrees that this procedure keeps the cacao raw. Like Hard, David Wolfe, author of Naked Chocolate, thinks fermenting the beans alters them too substantially to still be considered raw. His solution is that instead of fermentation, raw chocolate should go through a “no-to-low fermentation process,” or a water soaking, and the cacao beans should get stone-grounded rather than put through a metal conche, which is a common tool used in making chocolate.

That’s one way of dealing with raw chocolate. Another way: fermenting cacao seeds and drying them in the sun, all the while monitoring the temperatures to make sure it doesn’t rise above 118 degrees, which is how it’s done at New York company Antidote.  “Everything is processed very carefully, because it’s raw,” says Antidote founder Red R. Thalhammer. “This is something we discuss with the farmers and they take the temperature constantly.”

Though it’s hard to regulate just how hot the beans get while fermenting, many raw chocolate companies do monitor the heat their cacao receives. None of this information is printed on the labels, however. So, if this degree of raw means a lot to you, it’s best to contact the company and find out their practices.

The Price of Raw Chocolate
But why, you may wonder, would anyone pay so much for snack when you can wander down the aisle and get a Hershey’s bar for a mere $1, or even a more refined hunk of Godiva for about $3? At around $7 to $15 a bar, raw chocolate isn’t cheap, but there is a lot more work and actual cacao that goes into it.

“For certain chocolatiers like us who are highly specialized, our pricing makes a lot of sense,” says Sklaar. “It’s all part of the value that we put into our product, plus the quality and integrity of the chocolate.”

Actually, when you break it down, raw chocolate isn’t much more expensive than say a bar of artisan chocolate by Mast Brothers, which charges about $8 for a two-and-a-half-ounce bar, compared with Fine and Raw’s price tag of $8.50 for two ounces, or Antidote’s 2.3-ounce bars for around $7.50. With these gourmet bars, you are also paying for the use of organic, pure cacao that’s often imported from South America, Africa, Indonesia and Central America, where the process alone costs more money. After all, each cacao bean comes from a pod that contains 20 to 60 seeds, and each cocoa tree has around 12 pods, which take around five months to mature. Then, keep in mind that it takes about 12 beans to make a two-ounce bar of 70 percent cacao. So, depending on the yield, you only get around three to nine bars per tree. In the end, after calculating all the labor and time put into harvesting cacao, not to mention the confectioner’s role and the extra ingredients added, $12 for a bar of chocolate doesn’t sound quite so outrageous. 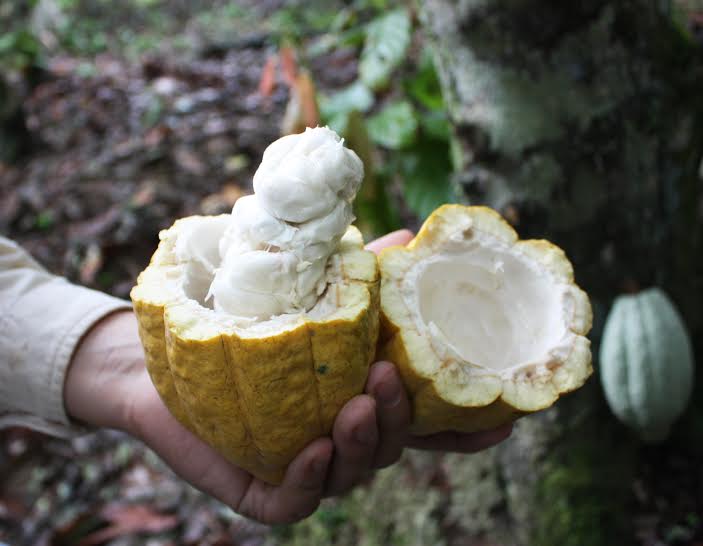 An opened cacao pod. Each cocoa tree has around 12 pods, which take around five months to mature.

Is Raw Chocolate Really Healthy
It’s hard to grasp the idea that a bar of chocolate can actually be good for you. But, like most living foods, this one has a lot of benefits. Just think, the proper name for a cocoa tree is theobroma cacao, which means “food of the gods.” And, when it comes to all the feel-good properties in chocolate, it’s not surprising this plant is so highly touted.

“Raw chocolate contains a whopping 10 percent antioxidant concentration level of flavonols, which makes raw chocolate the richest antioxidant source of any major food in the world,” says Wolfe. He added that raw chocolate is mineral-rich and a superior source of magnesium, chromium, vanadium, copper, zinc, manganese and phosphorus, which are important stress-fighting, blood-sugar-normalizing and bone-building minerals.

However, it’s not just raw chocolate that has these nutritious qualities.

“Raw alone is not the magic word and does not do the trick,” says Thalhammer. “As a general rule, make sure the cacao content is high.” She suggests you also evaluate the percentage of cacao, sugar content, whether or not it’s organic and, of course, the brand. “Further, if you are looking for a bar that is good for you, make the second test and see how you are feeling after eating half a bar or a whole bar,” she says. “You should feel energized and have a sense of well being. And, if you don’t feel so good, it was most likely not the healthy bar you thought it was.”

This is also where the numbers come in. A bar that’s 80 percent cacao is going to be darker and chalkier in flavor than a bar that is only 50 percent cacao. Aside from flavor, that figure represents the actual amount of cacao in each bar. The remaining percentage usually involves sugar, milk, nuts, or whatever the chocolatier has added to the bar. The more cacao in the bar, the more health benefits you get.

Here are a few brands of raw chocolate to try:

1. Fine and Raw: Sweetened with agave, the smoky Mesquite Bar is worth a go. It’s excellent in a s’more, though technically it wouldn’t be raw, anymore, if you prepare it that way. The company’s new Cowgirl Collection also proves dangerously delicious and comes in flavors like ginger, white chocolate and hazelnut.

2. Antidote: This company produces a 100-percent raw chocolate bar as well as the pleasing 50/50 bars that mix in roasted chocolate. Try the 77-percent cacao bar with almond chunks and fennel seeds for hearty and fresh tasting treat. They also do a lovely blend with lavender and red sea salt that tastes like having dessert seaside.

3. Lulu’s Chocolate: Try the luscious Love Truffles, which come with hazelnut Rawmio, which is a handcrafted nut cream made by soaking organic hazelnuts in water and then stone grinding them with cacao nibs and coconut sugar. The result is a melt-in-your-mouth bite of pure indulgence that will have you eating the whole thing. Another good bet is their Aztec Crunch, a treat made with low-glycemic coconut sugar that has a pleasing chew due to tiny cacao nibs nestled in the thin bar.

4. Righteously Raw: For a dash of raw chocolate to your smoothie or cup of soy milk, the Rawcholatl comes in powder form and gives a spicy, chocolatey kick to whatever you add it too. The recipe for the blend comes from the ancient Aztec tribes and consists of black sesame seeds, aji Amarillo, vanilla, cinnamon, and other warming ingredients. The company also makes raw chocolate bars, the best being the caramel flavor that uses dates to sweeten it.