Early this June, Mario Draghi introduced a new concept in international monetary by setting the interest rate at the European Central Bank into negative territory. It seems abstract: banking relies on the deposits to make loans, and so it typically incentivizes the former to subsidize the latter. What Draghi is doing is essentially charging the banks to keep their money in the ECB, in the hope that the banks will try to find other places to put their money, namely, making loans to businesses, both new and established.

In the Eastern region of Austria known as Burgenland (around a lake known as Neusiedlersee, pronounced Noy-zeed-lerr-zeeh) there is a town called Andau, which is generally considered to be one of the warmest areas in the nation. The windmills that dot the region are just the most visible expression of the low-interest economy – hundreds of millions of Euros were produced by the region’s government to build enough huge, ultra-modern windmills to make the region self-sufficient in terms of its electricity, well ahead of the EU’s goals for 2020.

Amongst these windmills in Andau is a young man named Hannes Reeh making Zweigelt and Chardonnay, among other varieties, and in his terms, “Trying to make wines people like.” His father began the winery in the 1990s, choosing to make his own wine rather than sell his grapes to the local cooperative, and his son took over in 2007 after returning from a stint making wine in Australia and in their well-regarded neighbor Nittnaus. 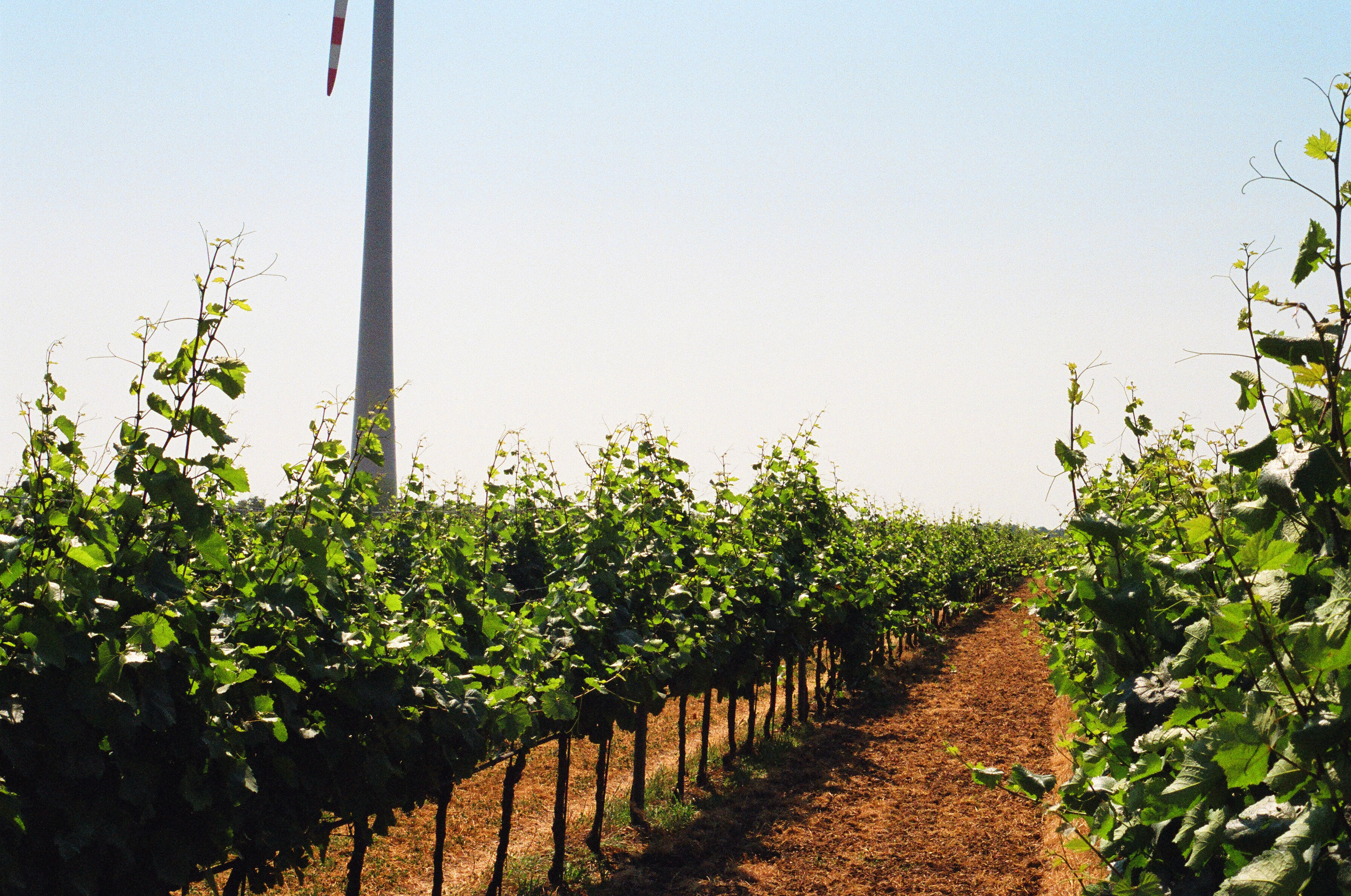 Zweigelt grows in the shadow of a windmill in the Austrian town of Andau.

When most people think of Austrian wine they tend to think of Grüner Veltliner and Riesling grown on steep slopes, mineral, high-acid whites. In Andau, like other towns in the East, most of the wines are red and made from grapes like Blaufrankisch, its descendent Zweigelt and even Bordelaise varieties like Merlot and Cabernet Sauvignon, which were planted as early as the 1980s. Hannes loves Chardonnay as well and it makes up most of the 20% of his production that is white. A Gemichster Satz, or blend, of odds and ends like Sauvignon Blanc and Gelber Muskateller makes up the rest, but it isn’t available in the United States.

Hannes is a gregarious sort, quick to offer you a beer or a glass of Champagne and wears a whistle around his neck to summon his partner in crime, a French Pointer named Lenny. The winery, designed by the Viennese firm of Halbritter & Hillerbrand, slung low in a very Teutonic Modern style, is even more impressive for the ease with which Hannes is able to get the product of his vines into the bottle. Unlike the crammed 200-year-old cellars and repurposed garages of the wineries along the Danube, there is plenty of space at Reeh. They utilize top-of-the line technology, like the Ferrari of presses, a double barrel-washer and a floor-mounted turntable to make plastic-wrapping pallets even easier. Hannes Reeh in his tasting room.

That’s not to say Hannes is making wine by machine, in fact, he is committed to making wine in a natural way with his Unplugged line, a reference both to his musical past and his reliance on natural yeast with no enzymes or filtration. The winery is in the middle of its third phase of production, which will make more room for even larger tanks like the ones he purchased just last year. In talking about the last vintage, he admitted to realizing mid-harvest he didn’t have enough room for the oncoming juice, so he called up his purveyor and, with a big swipe of his credit card, purchased thousands of liters of extra tank capacity in just two days.

When asked how a young winemaker with an admittedly good reputation but not much of a track record was able to secure the kind of capital to make all this happen, he laughed.

“The banks keep calling me!”

His creditors see an opportunity. Hannes makes wine that is highly drinkable and isn’t afraid of defying convention if he feels like his audience will appreciate it. He favors American oak barrels, often maligned for providing cheap thrills via notes of coconut and dill (think old-school Rioja) but when used with restraint, they cradle the Zweigelt in the same sort of soft spiciness that Paul Draper of Ridge was known for using for his Zinfandels.

Even without his export markets, like here in U.S. as well as Switzerland and Scandinavia, much of his production is consumed at home soon after release. It also helps that he’s been well-received in the wine press, Falstaff especially, which awarded him with better-than-average scores. Here is exactly what Mr. Draghi is trying to achieve: getting money out of the banks and into the hands of people who will grow the economy.