From artisan pickles and extraordinary salts to the art of winemaking and food photography, this series is dedicated to the masters behind culinary craftsmanship and is brought to you by our friends at Bridlewood Estate Winery, whose award winning wines are crafted with care and passion by dedicated artisans on California’s diverse Central Coast. In our previous posts we spoke with Bridlewood’s Mark Williams and food photographer Michael Harlan Turkell, today we’re talking to the makers of perhaps the finest pickles in all the land.

Using their maternal great-grandmother’s spicy pickle recipe, brothers Bob, 35, and Joe, 33, have become a legend in the world of artisanal cukes, but they never planned it that way. Starting with that original spicy pickle, the McClure’s started peddling their goods in 2006, and today, though they still stick to cucumbers, they have garlic-dill, sweet and spicy, and arguably the best Bloody Mary mix ever made. Though you can find McClure’s Pickles all over the country at select stores, and even in specialty shops in Australia, the United Kingdom, Ireland, and South Korea, the operation remains small and family owned. From his office in Michigan, Bob McClure took the time to fill us in on what makes his pickles so darn special.

When did you make your first pickle?
I was around 6 and my brother was 4. It’s our great grandma’s spicy pickle recipe that we grew up making with her in Michigan. We always had it as a summer event where the family would go to the farmers market in Detroit and pick up fresh produce, bring it home to the kitchen and have a day of pickling.  At the time we made about 100 jars a day, it was a lot of work for a kid in a small kitchen with a lean crew of family members, but it was good.
So when did you decide to go from pickling for friends and family and make a business out of it?
It’s interesting, there wasn’t a definitive moment of here’s the business plan and here is how we are going to do it. Though, there were a couple of starting points that helped with the formation of the company. My brother was in Michigan with our family and I was in New York City where I was an actor doing commercials and theater. I was in Pennsylvania with a theater company and I decided I wanted to make pickles for my cast members during that season. So, I asked my dad for the recipe and everyone liked them so much, they kept telling me I should go into business. But at the time I was like, “That’s crazy, I am an actor and I don’t want to do anything else.”
What changed your mind?
An article in the New York Times came out about Rick’s Picks (another artisanal pickle company). Rick, the owner, is a colleague more than a competitor, and the article mentioned him stating that he had a difficulty creating a spicy pickle recipe that was really solid. I thought, “But that’s all we ever made, and if there is a void in the marketplace maybe we could take this recipe and sell it.” After all, if it didn’t work we would have a lot of holiday gifts. My dad and brother said okay and we each invested a couple thousand dollars into buying materials to make the first batches. I rented out a kitchen in a senior center in Williamsburg and my brother and dad rented out a kitchen in Michigan.
How did your pickles go from a mom-and-pop business to what it is today?
I had some product available, maybe 10 cases, and I took them to a dinner party next door to my apartment. There I met some friends who now own the Brooklyn Kitchen [a popular kitchen store, classroom, and grocery shop in Williamsburg]. They were like, “We are starting a store down the street,” and I was like, “I am starting a pickle company.” From there, we started a business relationship and McClure’s was the only food product in their store at the start.
It was the first time something like the Brooklyn Kitchen had opened in the area and Florence Fabricant of the Times reviewed it. When she was there she noticed the pickles and wondered why were they the only food in the store, so she tried them, thought they were great and wanted to write a piece on the pickles alone. We started the company in August 2006 and in November 2006, we had an article in the Times. It was lucky and scary as hell. 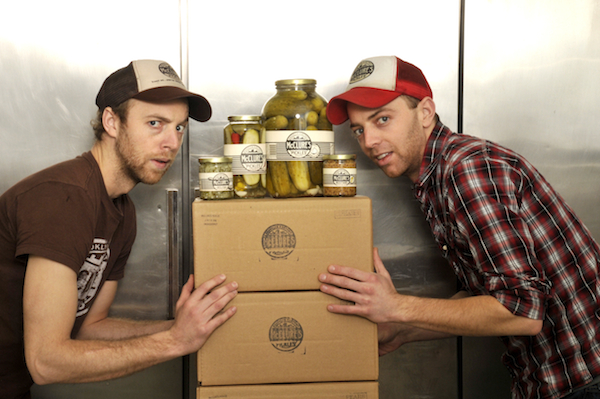 What makes your product so darn good?
I say first and foremost it’s the attention to quality of the raw materials, from what you use to make the brine, the cucumbers, the salt and the dill. If you buy bad ingredients, you are going to get a bad product. So, we have to have good suppliers and great team members who understand what we are tying to do. It’s a competitive market space in the pickle industry and you have to set yourself apart. You have to let the consumer see that they are eating something different that’s worth paying more for. Our story embodies what a lot of people wish they could or would have done, taking a risk to make something their own. If they can live through us vicariously and connect with our product, that’s great.
Why do you just stick to cucumbers?
We have a lot of people wonder why we don’t do carrots or beets, and it’s not something we would never do, but there are a lot of people that already do a really good job. We like cucumbers, and if you have to add additional raw material, that presents new challenges. We like the ease of having a slimmed down supply chain.
Everything you do is by hand, why is that important to you?
The slicing is no longer done by hand, one for insurance risks, it’s just too dangerous for a team member to be slicing pickles day by day and I don’t want to sacrifice their safety. So, we purchased a slicing machine that does a great job, even better than hand slicing. Plus, it gives them more time to hand-pack the jars, which is a process that gives more quality control over how it’s done. Our team members are trained on how to handle cucumbers and to know when bad material is getting through the production stream. It’s a value-added process.
Why do you think pickles are so popular right now?
I think food that connects you to a story and things done by hand are very in. We kind of grew up, at least this generation grew up, where our parents shopped for bulk, nameless products and cut coupons. It was cost savings for your family. Now we have a generation that is like, “This isn’t good for us, so maybe we should take an interest in our food.” But also, pickles are simple thing that have been done in every culture for thousands and thousands of years. There is nothing new about it, it’s one of the oldest forms of preserving food, and anyone can create them too.