You might know Jack Antonoff from his bands, Steel Train and more recently, Grammy award-winning fun. Hm, if you end fun. with a period, do you have to use two periods at the end of a sentence? Deep thoughts aside, Antonoff’s new solo venture, Bleachers, is an indie pop fan’s dream come true. To stay creative during the album release process (Bleachers’ Strange Desire goes live next month) Antonoff devised a way to connect with his fans a little more personally and pleasantly. The Bleachers advice hotline is an actual line fans can call. He asked people with birthdays coming up to leave messages and a lucky handful got birthday cakes sporting the first view of Bleachers’ album art.

I talked to Antonoff before the festival weekend kicked off to see why he didn’t get any cake but DID get a bunch of seaweed. I also needed some advice.

Tell me about releasing your new album art on cakes. Where did the idea originate and more importantly, what KIND of cake?
We had all different kinds of cake. We picked eight people who called into the hotline about their birthdays and had local bakeries around the country make the cakes and deliver them. The goal was to find a new way to release the art before the album went live, so we had these cakes done and brought them to the fans’ workplaces. It creates a memorable experience and was more exciting than just announcing it via social media. 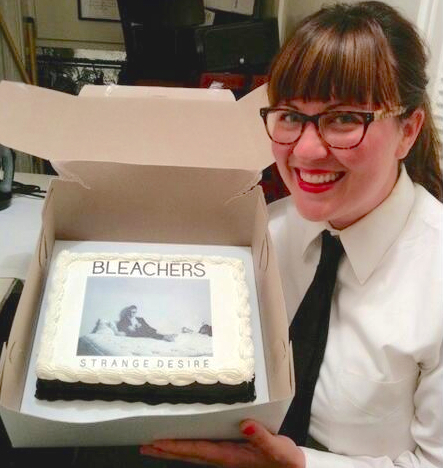 A Bleachers fan gets an awesome birthday gift at work.

How are you going to top that extremely nice gesture when it comes to announcing your second album?
I have other ideas, but I can’t tell you them cause they won’t be interesting yet.

Did you get to eat cake at any point?
One of the bakeries made me a cake and sent it to RCA, but I had a million things to do that day and couldn’t take it with me. Then my manager stuck his finger in it, so I did not actually end up eating any cake.

Where did you get the idea to release your album title, Strange Desire, via a heartfelt New Jersey Craigslist ad?
We were just trying to find more interesting ways to do regular things, more interesting than hashtags or anything like that. I’m from Jersey originally, so I put the album title in a NJ Craigslist ad and people just found it and shared it like they were going to do anyway. In this day and age of everything being available on social media you have to find ways to be creative.

Question for the Bleachers advice hotline: the guys I date are still picky eaters at practically 30 years old and get weirded out by the fact that I like everything. Like, they say “ew” when I put mustard on my sandwich and make me feel like a monster. But that’s where mustard goes!
You know, you can tell a lot of about a person by the way they eat, how and what they eat, and if people are threatened by you being an adventurous eater it says something about their general state of confidence. My advice is to move on if someone’s not excited by something good like that.

Thanks, Jack, I feel better. Your tour starts this weekend, hitting great festivals with notable food scenes like Governors Ball this weekend, Lollapalooza and Outside Lands. Where are you looking forward to eating the most?
Festivals have really stepped it up in the past few years. Outside Lands has all the amazing food trucks from San Francisco so that’s the one I’m looking forward to most, but it could be a big surprise — you never know. We’re playing the Osheaga Festival and Montreal has some of the most amazing food I’ve ever had.

What’s on your tour rider?
I like seaweed, so there’s a lot of seaweed on there. I’m looking for things I can eat a lot of and not ruin my figure. Those packs of salty, crunchy seaweed, I like those.

Say a great pizza place named a pie after your new album. What’s on the “Strange Desire?”
Burrata and then just like a wild assortment of vegetables. Interesting root vegetables would be cool.

Check out the video for Bleachers’ single, “I Wanna Get Better” and don’t miss Strange Desire, out July 15th on RCA.