If you ask someone who knows feta which type is the best, you’re likely to hear the name Arahova. Four syllables, a trill on the r, emphasis on the “ho,” breathed out on a whisper. Arahova is the classic, the standard by which other fetas are measured. Made of 100% sheep’s milk and aged in a wooden barrel for up to five months, it’s creamy and not too salty, with a tangy, lactic acid bite that is surprisingly complex.

On the opposite end of the spectrum is domestic American feta, a dense, dry cheese that tends to be more crumbly and less flavorful than its European brethren. “It’s fine in spanakopita or a blended cheese spread,” says Philip Hadjikostantis, a cheese expert who works the feta counter at Titan Foods, a Greek specialty market in Astoria, New York. Home to NYC’s largest Greek population, Astoria is a place where people take their feta seriously, and Titan is where they come to get it. “But I wouldn’t use it as a table cheese.”

Hadjikostantis knows his table feta, as do his customers. The store’s feta section has at least 10 cheeses available in bulk. Even more surprisingly, its feta selection reflects only a fraction of the hundreds of fetas that are made, sold and consumed around the world.

For Hadjikostantis, the “table cheese” distinction is key: a table feta is able to stand on its own merits. Served with a splash of olive oil and a sprinkle of herbs, it has complexity and character, and is the perfect accompaniment to go with a glass of retsina and a bowl of olives. Table cheese, in other words, describes a feta that isn’t afraid to stand up to cheddar or manchego. It’s a cheese that comes ready to play.

A World Away From Supermarket Feta

For people who are used to American supermarket feta, it’s hard to understand the incredible breadth of the cheese, much less the near-maniacal devotion that some brands engender. After all, when it comes to ranking cheese, most supermarket feta lands a bit below pre-grated parmesan and a bit above those yellow American cheese slices that come individually wrapped. It’s a sort of disposable cheese, a non-vegan tofu substitute that exists to add a little bit of salt to a salad or a little bit of creaminess to spinach pie. It certainly doesn’t seem like the kind of thing that could inspire love, loyalty and obsession. 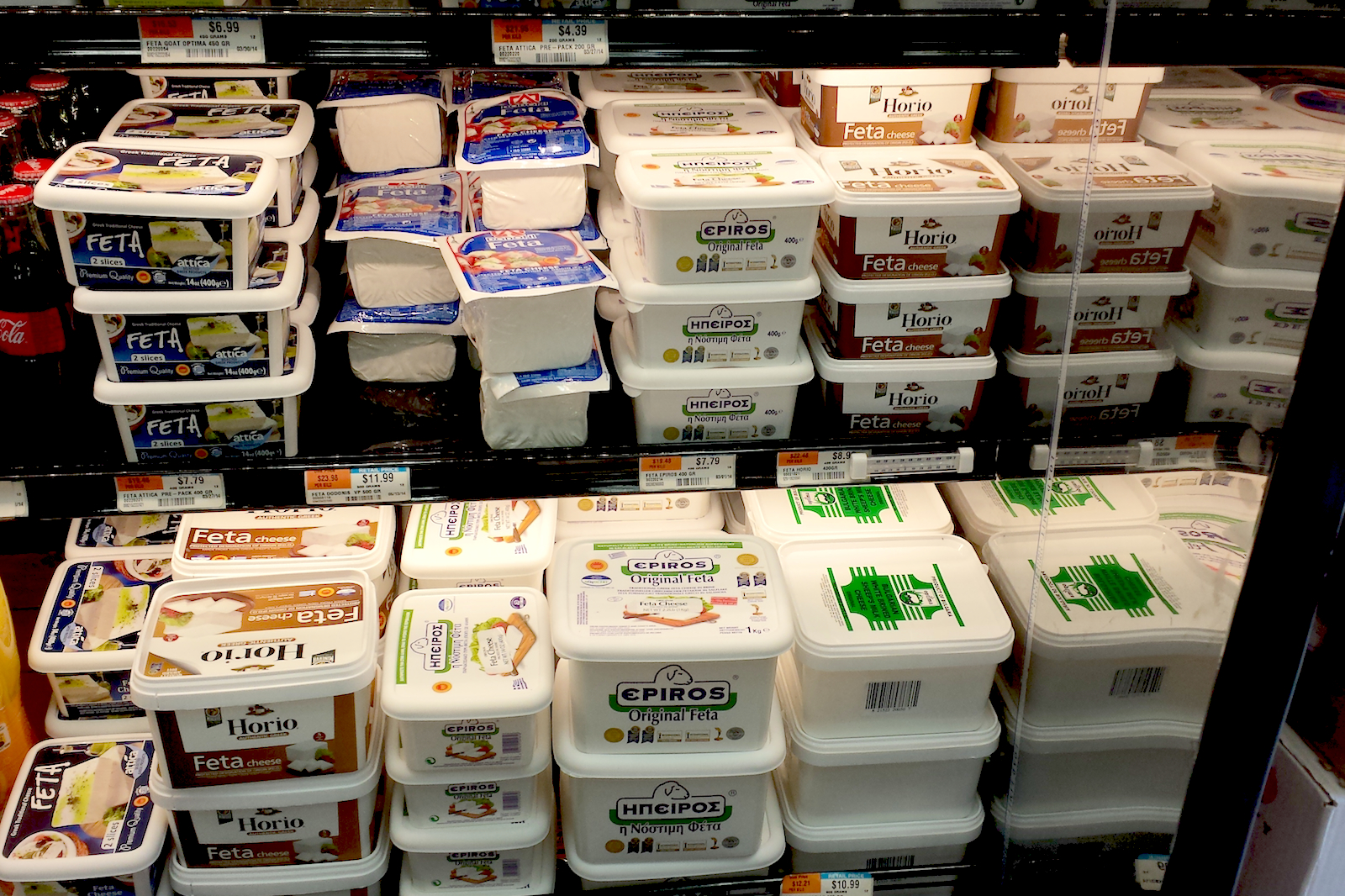 Prepackaged feta at Titan Foods. If you see any of these on supermarket shelves, they’re pretty good!

Part of the reason this feta is dismissed is because of its incredible simplicity. The basic recipe has barely changed since the days of the Trojan War: milk is heated, mixed with rennet, drained, salted and aged for a couple of months. There’s no compression, no introduction of bizarre ingredients, no multi-year aging.

But because of feta’s simplicity, however, every factor of its production becomes exceedingly influential. Take the milk: sheep’s milk, the classic feta ingredient, makes a creamy, yellowish cheese with a soft texture and a decidedly “barnyard” flavor. Pure goat’s milk feta, like Agrafa, tends to be whiter, drier and milder than sheep and often has a slightly gamy aftertaste. It’s a bit rubbery, but makes a great cheese for crumbling over salad. As for cow’s milk, it makes a feta that is dry, crumbly and exceedingly bland. To make up for the dull flavor, cow’s milk feta makers tend to go heavy on the salt, overwhelming any flavor nuances.

Not surprisingly, the European Union, which takes food names quite seriously, has determined that, for cheese to qualify as “feta,” it must be predominantly sheep’s milk, with no more than 30% goat’s milk.

How Feta Is Made

The other main aspect that influences feta’s flavor is its production method. After the milk is cooked, mixed with rennet and separated, it’s placed in a barrel, a basket or what Hadjikostantis refers to as a “tin box.” Each of these methods lends a different character. In a barrel, for example, cheese can age longer, which enables it to develop more richness and complexity, or what Hadjikostantis refers to as a “sharp” or “cooked” flavor.

Basket-aged cheese, on the other hand, briefly sits in a plastic basket before being soaked in brine for up to two months. The finished cheese is saltier and less rich than barrel-aged, with a younger, less-developed flavor.

Similarly, tin-aged cheese, which briefly ages in a tin box before being submerged in brine, also has a young, less-developed taste. But, while tin-aged and basket-aged cheeses aren’t as complex as barrel-aged, they can also be table-quality. Their flavors, which are more summery and lighter than barrel-aged, go well with salads.

One way to find out how your cheese was made is by looking at its shape. Barrel-aged cheese is generally served in wedges, with a curved outer edge that reflects its original wheel shape. Basket cheese, by comparison, tend to be smaller – about 2-3 cups per cheese – and retain the mound shape of the original basket. Tin-aged cheese is box-shaped, both at the end of production and at the grocery store, and is generally sold in slabs that look like bread slices.

While the definition of feta and Greece’s place in its production seem almost destined to create a certain amount of heavy-handed nationalism, Hadjikostantis tends to be pragmatic in his discussion of the various brands. For him, the primary considerations are the amount of sheep’s milk and the production method, not the country or region of origin.

Granted, his favorite is Arahova, the Greek classic, and Hadjikostantis tends to lean heavily toward other barrel-aged brands, like Kefalonia. However, he points out that Bulgarian sheep’s milk feta, which generally costs about half the price of a barrel-aged Greek, is also a first-rate table cheese, with a buttery taste and a slightly saltier flavor that mellows with a splash of olive oil. 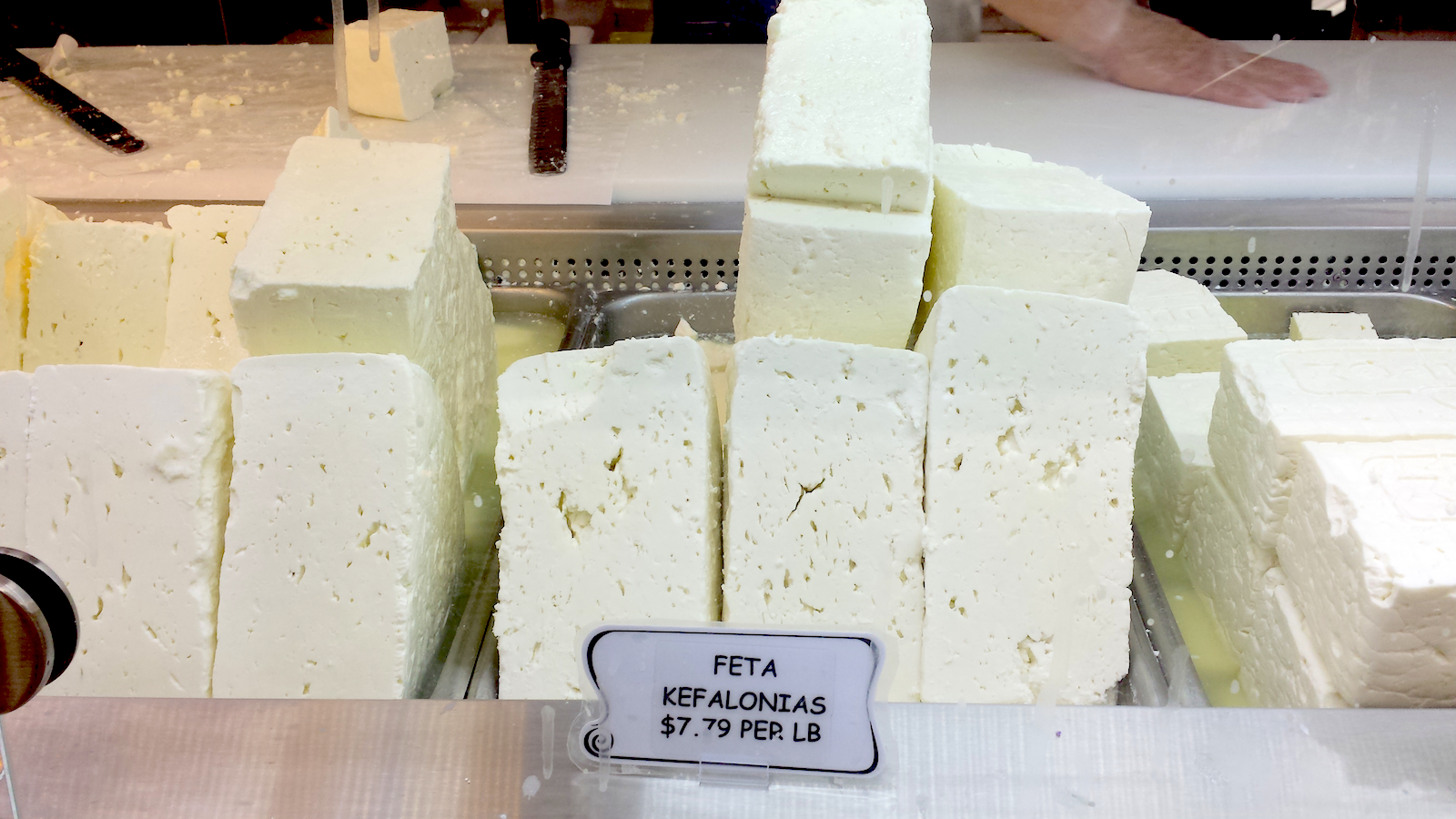 As I discovered, French feta, most of which is made from sheep’s milk left over from Roquefort cheese production, is also pretty outstanding. Creamy and rich, if a little less complicated than a barrel-cured Greek feta, it has a great texture but tends to disappear under the flavor of herbs or other additives.

For that matter, if you ever get a chance to try double-cream feta, give it a shot. Made in almost every country that makes feta, it’s like a super-creamy cousin of chèvre. Given that it’s very different from most fetas, it can be hard to find, but it’s worth the search.

So here are the ultimate takeaways to bring with you to the deli counter at your local market:

Take your new knowledge for a spin with our 15 favorite ways to cook with feta.