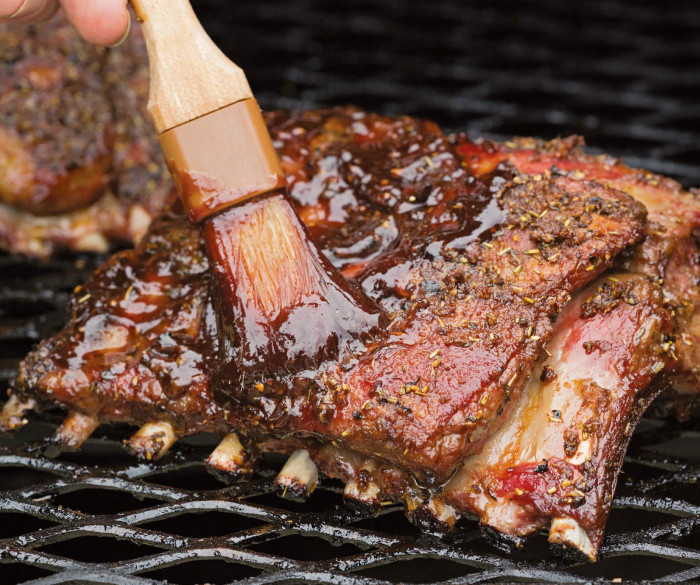 Chris Lilly is emphatic about grilling fish. Chris Lilly, the man behind the Ole Hickory at Big Bob Gibson Bar-B-Cue in Decatur, Alabama and a legend on the competition barbecue circuit — he’s taken first place pork (a very serious thing) a record seven times at the Memphis In May World Championships. Chris Lilly, he who popularized Gibson’s trademark white barbecue sauce, an Alabama classic with a legion of sauce junkies around the country. This guy wants to talk about seared trout? “I really love the simpleness and quick grill of the charcoal-seared trout,” he says without a hint of sarcasm. “It’s absolutely delicious, and let tell you about the cedar plank salmon.” Lilly is what you would call a modern pitmaster, a guy who is applying his deep knowledge of smoke-based cookery to not just anchor American proteins (ribs, brisket, ribeye), but more diverse products and grilling scenarios.

In his new book Fire & Smoke: A Pitmaster’s Secrets, he offers recipes for barbecue paella and Indonesian sweet and sour shrimp pizza. Plus, there are a ton of vegetables and grilled dessert entries. A few cocktails too. Indeed, Lilly is a Food Republic Grilling God and as we find out, wants everybody to know that like college football, Bama barbecue is number one.

Tell us, what are some of the biggest mistakes that home grillers can make?
Overcooking. And people do this because they’re scared of undercooking. When you cook things that are not as well protected and don’t have a high fat content, such as a boneless chicken breast or a pork chop, people tend to overcook them. So my advice to everyone is to make sure you have an internal meat thermometer. And know what internal temperatures to bring your meat up to. I like to bring my chicken breast up to 160 internal. For pork chops, many people don’t know it, but the USDA’s new guidelines say that you can cook the pork up to 145 degrees internal and be safe.

Pork used to be much higher, I recall…
Absolutely. And by the time you cooked it up to about 175 or 180 degrees, the pork chop is dry. And you want your pork juicy! I bring up my pork tenderloins and pork loins to about 150 degrees internal but often let it rest.  That’s another mistake people make. They don’t let their meat rest. You want to pull it off the grill and let it rest, so the juices will sort of equalize in the meat and will not run out as soon as you cut it, and dry the meat out.

What do you like to drink with your grilled meat?
When I’m grilling and I’m barbecuing, I’m hanging out with family and friends around the charcoal grill without a doubt. And that calls for cocktails. Some of my favorites are – well let’s just go down the line. I like a great wine with my barbecue and generally I’ll pick a bold wine, such as a red zinfandel, a Cab or a Malbec.

Moving on to beer and cocktails?
Beer and cocktails – you know you gotta have some cold beer around. A few of my favorites with barbecue. Let’s go California. Let’s go Alexander Valley Brewing Company Oatmeal Stout. The cool thing about cocktails is that you can actually do grilled cocktails. Cocktails such as grilled lemonade or a grilled fruit sangria or a grilled mango mojito.

What’s the worst food item you’ve ever seen thrown on a grill?
Oh my goodness. Wow. You know what? The one thing I remember that was pretty bad that someone did – you know those fruit roll ups? They rolled those things out, and put those on top of a spare rib, trying to get sort of a sweet and tart flavor to the ribs. They used the fruit roll ups as a seasoning.

That sounds like a lot of high fructose corn syrup.
Absolutely horrible. Don’t try it at home. And the guy that did it, he got a verbal reprimand from everyone that tasted his concoction.

What is your favorite grilling experience outside the United States.
Without a doubt, Jamaica.

Oh wow, I have not heard of Jamaican grilling. Enlighten me.
I love Jamaica, I’ve been down there a few times. And what keeps me coming back is the jerk barbecue, the jerk shacks, the locals that cook. It’s mainly pork and chicken and all very interesting. They use a lot of Scotch poblano peppers and pimento berries, allspice, a lot of things that are really really heavy in flavor. And it’s absolutely delicious.

Do you have a favorite region in the United States for barbecue?
Yes, the north Alabama region (laughs). It’s been widely written out that there are four barbecue regions. North Carolina, Memphis, Kansas City and Texas. So the general answer to that would be to pick one of those regions. But there are so many areas in the U.S. that are forgotten, or can’t be shoe-horned into those regions. And I think that’s what they did – a writer a long time ago probably just was trying to make something clear and concise, to just say this is it. And everybody accept it. Well they’re wrong! How about Kentucky and mutton, how about north Alabama and the whole chickens with barbecue white sauce? And all the places in between that do a combination of vinegar sauces and thick tomato based sauces. There’s so many different regions in the country, and you can’t just shoehorn everything into the four major regions.