The story goes that steak tartare – that French classic of freshly ground high-quality raw beef combined with an egg – has its origins in medieval times when Tartars would shred raw meat – some say horse flesh – with a knife. The history of the classic dish may be unclear, but one thing is for sure. Many cultures, from Africa to the Middle East and Asia, have a hankering for raw meat. Here are five of our favorites from around the world and where to find them in New York City.

Thailand: Num tok koy
It’s unclear if muay Thai fighters eat raw meat, but they probably do. You don’t need to be a Thai kick boxer to enjoy the num tok koy at Isaan Thai specialist Zabb Elee. The lean ground beef sings with roasted chili powder, lime juice, kaffir lime leaf, onion, mint and cilantro. Crunchy little bits of toasted rice add texture. Take it Atkins style, or with some balled up sticky rice to dredge through the heady combination of marinade and beef juices. If the raw meat craving hits in the wee hours, Zabb’s got you covered. They’re open ‘til 2 a.m. on weekdays and 3 a.m. on the weekend. Zabb Elee, 71-28 Roosevelt Avenue, Queens, NY 11377, 718-426-7992, zabbelee.com

Korea: Yukhoe
Just like the classic French version, Korea’s answer to steak tartare makes use of a raw egg. That’s pretty much the only similarity, though. Yukhwe consists of coarsely ground raw beef tenderloin mixed with sesame oil and topped with toasted pine nuts, and can be found at San Soo Kap San. Next to the beef, find a heap of slivered cucumber and Asian pear. Mix it all the together with a raw egg and a bit of sesame oil. The combination of tender meat combined with the toasty nuts and crunchy vegetation calls to mind a riceless bibimbap for protein lovers. 17110 Northern Boulevard, Queens, NY 11358, 718-445-4850

France: Steak tartare
One of the more traditional steak tartares around can be had at M. Wells Dinette. When Hugue Dufour opened the haute cafeteria, he intended to serve horse meat tartare, but quickly scuttled that idea after too much heat from misguided animal rights activists. (For the record, his horse tartare – which he once served at a MoMA PS1 event – is excellent.) Shot through with mustard seeds and crowned with a poached egg, Dufour’s steak tartare is impeccable. Spread on a baguette it’s almost too good to share. 22-25 Jackson Avenue, Queens, NY 11101, 718-786-1800, magasinwells.com

Ethiopia: Kitfo
Ethiopian cuisine might be better known for spongy bubbly sheets of sourdough injera and a host of fiery vegetables and meat dishes, but it too has its raw beef specialty: kitfo. The name derives from a word that means to finely chop. That’s exactly what it is: finely minced beef seasoned with clarified butter, jalapenos, onions and the chili powder blend mitmita. The version at Awash is among the best around: fiery and fresh, and, thanks to that butter, uniquely satisfying in its own way. 242 Court Street, Brooklyn, NY 11201, 718-243-2151, awashny.com 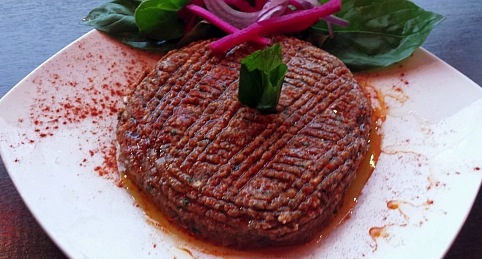 Lebanon: Kibbe nayeh
Lamb is a favorite in Middle Eastern cuisine so it’s no surprise that Lebanon’s raw meat dish centers around this protein. Kibbe nayeh is a relative of kibbe – the fried footballs of cracked wheat and meat – except that this kibbe is nayeh, which is to say, raw. At her namesake Queens restaurant, Wafa Chaimi makes an entrée portion to order, blending freshly ground leg of lamb, bulgur, walnuts, basil, black pepper and Lebanese seven-spice mixture. Topped with a splash of olive oil, it’s traditionally eaten with raw onion and warm pita. Can’t make it to Queens? You can score a bang-up appetizer of kibbe nayeh at Salwa Fallous’ Au Z’aatar in the East Village — where it is served with mint leaves, spicy harissa and the garlicky spread known as toum. Wafa’s, 100-05 Metropolitan Avenue, Forest Hills, NY, 11374, 718-880 2055, wafasfood.com Au Za’atar, 188 Avenue A, New York, NY, 10009, 212-254-5660 auzaatar.com

Joe DiStefano is the Founder of Chopsticks and Marrow. He offers several food tours, including one of Flushing’s Chinatown, through the blog.

Read these stories about Queens on Food Republic: