One day, about two years ago, we briefly discussed the potential of creating a themed week where each editor would select one country’s food culture to focus one. Each day of that week, we would feature recipes, stories and interviews from our country. I contemplated for a full 10 seconds, and then blurted out “Russia!” That was two years ago. And I stuck with it.

I had visited Russia once, about a decade prior, and to be frank, the food was far from the most memorable part of the trip. I remember consuming a lot of cabbage, mushrooms and mayonnaise. There must be more to Russian cuisine than borscht, I thought. I could have chosen a cuisine that I was more familiar with, like Turkish, but I was feeling adventurous (and maybe a little provocative) that day.

Needless to say, I had a lot of research to do. Along the way, I discovered zakuski, or Russian tapas (for lack of a better way to say it). Zakuski are a central part of Russian cuisine — much like Middle Eastern meze or Spanish tapas, meals start with a lavish spread of hot and cold hors d’oeuvres ranging from pickled herring to the famed Olivier salad, and much more. Traditionally, when welcoming guests, Russians offer a shot of warming vodka and zukuski almost always follows because nobody needs to drink on an empty stomach, right? The most ubiquitous zakuski of all is a simple pickled cucumber, which immediatly follows a shot of vodka without breathing in between.

In some ways, zakuski are more than a delicious spread of snacks. They tell the story of Russia and its culture: since the frigid winters last so long, Russians have been forced to use myriad food preservation techniques, including pickling, marinating, air-drying, curing, canning and “pelmeni,” or freezing food outdoors (not difficult). Most zakuski dishes use some sort of preservation technique which ends up enhancing its flavor in a big way.

The zakuski repertoire expanded during the Soviet era, borrowing flavors and techniques from new republics that became a part of the union. There were bright Mediterranean flavors borrowed from the warmer Caucuses (mainly Armenia, Georgia and Turkey), and fish-smoking and canning techniques were borrowed from the Baltic region. During the Soviet Era, mayonnaise also started to appear on Russian tables, often paired with potatoes in salads. This new industrial product was heavily promoted by the government, and housewives started incorporating it regularly into zakuski. 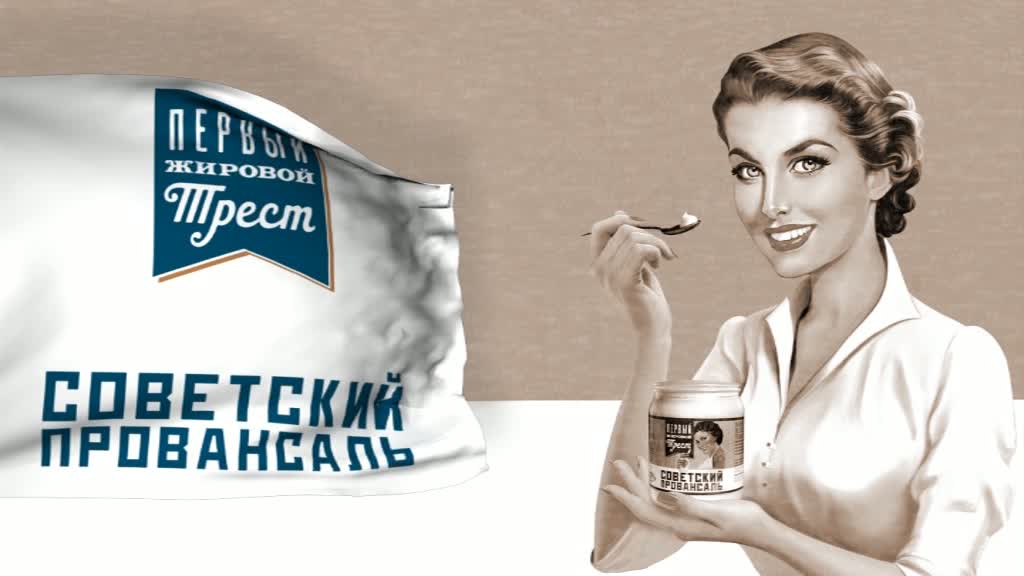 Historians have called mayonnaise the glue that held the Soviet Union together. Mayo jars became an invaluable vessel for anything a Soviet citizen might need to carry. This propoganda poster promotes the use of mayonnaise.

Each household had their own variations and recipes. In some regard, zakuski was one of the few ways to stand out in a culture where people were expected to look the same way, dress the same way and act in accordance to communist ideals. Housewives who could cook an impressive zakuski spread became the talk of the neighborhood. While there are plenty of different plates typically prepared, below are the essentials that you should familiarize yourself with:

Smoked Herring
Smoked herring can be served lots of different ways, including smoked and marinated with vinegar, oil, and onion, in sour cream, slathered with mustard, mixed with vegetables, nuts, or eggs, or added to salads. In addition to being highly nutritious, they’re very flavorful (as long as you’re a fish fan). 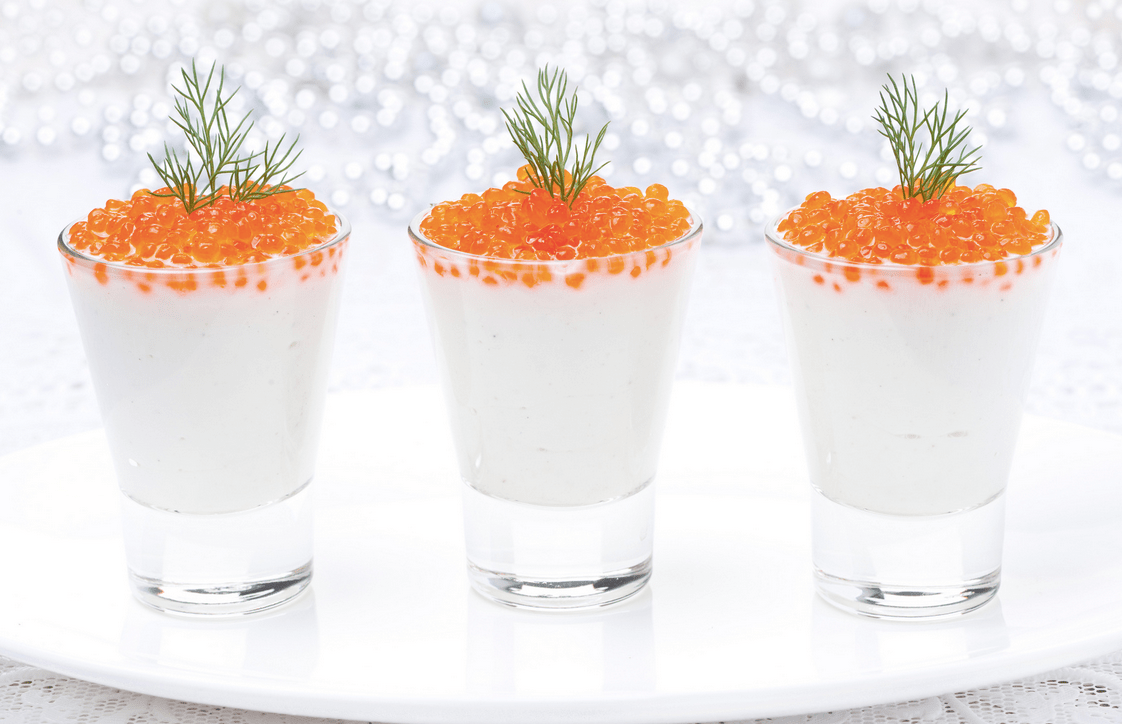 Salmon roe is served in glasses with mayo and white bread.

Caviar
Probably the most iconic (and luxurious) of Russian specialites, caviar is served as part of the zakuski. Black caviar is often served on a buttered blini. Red caviar from salmon (salmon roe) is served in bowls or glasses for guests to eat with pieces of fresh white bread topped with butter or wrapped in crepes and topped with sour cream.

Pickled Green Tomatoes
Russian pickling involves copious amounts of salt, as opposed to vinegar. A lot of the fruit and vegetables harvested during the short lived summer months gets pickled. Green tomatoes in particular are pickled for year-round consumption.

Herring “Under A Fur Coat”
This dish, more appetizing than it sounds, is a popular salad of herring, hard-boiled eggs, grated vegetables and beets.

Pork Aspic
Zakuski spreads almost always include at least one dish of a jellied protein — pig trotters, sturgeon or pike, poultry, or tongue — suspended in its own aspic and garnished with horseradish.

Smoked Salmon
Smoked or marinated salmon is served alongside a plate of small boiled potatoes topped with melted butter and chopped dill.

Buterbrod
Borrowed from Germany, Buterbrod is a sandwich made with buttered brown bread and topped with egg, cheese, sausage, herring or a slice of meat.

Zakuski spreads also contain a few hot foods, such as: 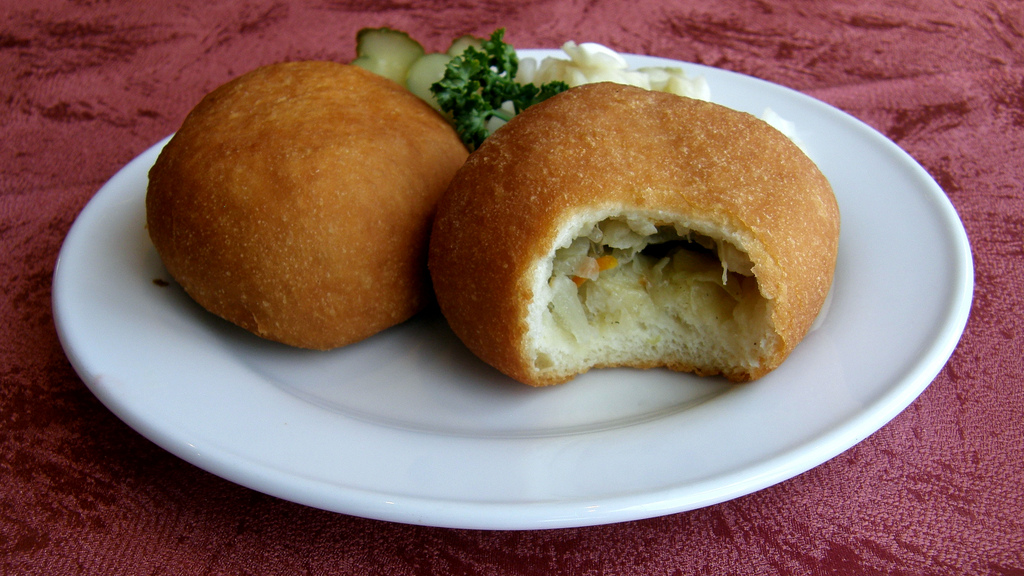 Pirozhki
Baked or fried buns stuffed with cabbage, golden raisins and pickled mustard seeds. Other versions include meat or a vegetable filling like mashed potatoes, mushrooms or onions and egg.

More from Russia on Food Republic: