Forget the debate about whether vodka was originally invented in Russia or Poland or the battle over which country makes the world’s best: for better or worse, the smooth clear spirit is inextricably tied to Russia. But which Russian vodka is the tastiest…and which is the best one for you to bring to a friend’s party? It’s a complicated question, made even more difficult by the fact that vodka, by definition, doesn’t have that much flavor. At its heart, it’s designed to be a blank slate, ready to be written on by the combination of mixers and garnishes that accompany it. (Speaking of which, here are a few snacks that go really well with vodka shots).

This isn’t to say that it’s completely flavorless: if you set five or six premium vodkas side-by-side and sip them, one after the other, with a glass water to clear your palate, you’ll discover little flavor nuances that make each one distinctive. It’s a fun experiment to try. Once. (There’s a word for people who “try” it regularly. That word isn’t “imaginative.” It also probably isn’t “functional”).

But for the vast majority of us – specifically, those of us who have not spent the last few years subsisting on rainwater and grain alcohol – the nuances of vodka are largely academic. Any middle or top-shelf vodka is going to be smooth, especially if you chill it before drinking. And, even for those with the tastebuds of a hummingbird and the nose of a bloodhound, the delicate flavors of vodka will disappear by the third shot.

So if you’re not going to base your Russian vodka choice on flavor, what should be the most important consideration? The label, of course! In most cases, your fellow vodka drinkers will make up their minds about the liquor in question before you break the tax stamp. So, given that this is one case where the book will most definitely be judged by the cover, here are a few key brands – and the message that they will send your guests and your hosts when you bring them to the table.

(Note: all vodkas are in their original flavor, without the addition of blueberries, bananas, whipped cream, marshmallow fluff, and so on. This is because we’re assuming that the people reading these reviews are over the age of fifteen, aren’t drinking this stuff on a dare, and don’t want vodka that tastes like a snow cone. If that is not the case, go with Stoli Salted Karamel).

The Classic: Stoli
Walk through the door with a bottle of Stolichnaya, and one thing will be immediately clear: you’re a classicist. Stoli is the vodka of historians, the booze for people who remember that there was once a country called the Soviet Union, and it was once an existential threat for the West. There was a time when Stolichnaya was a more stable currency than the ruble: people were paid in it, cars were bought with it, and fortunes rose and fell in the shadow of its iconic label. Now it’s a mid-price brand.

Ironically, today’s Stolichnaya is not entirely produced in Russia: the alcohol comes from a Russian factory, and the water that it’s cut with comes from Latvia, where it’s bottled. It’s quadruple-distilled, then filtered through quartz, sand, charcoal, cloth and (allegedly) Lenin’s back hair.

Flavor: Stoli’s flavor is solid. It’s made from wheat and rye, which gives it a smooth, ever so slightly sweet and creamy taste. Vodka snobs argue that it’s largely a mixer, but it stands up nicely on its own, particularly if you toss the bottle in the freezer.

The Generic: Russian Standard
The notion of a “Russian standard” for vodka is a little silly. After all, we’re talking about a country where going on a five-day, alcohol-driven bender is somewhat socially acceptable. During Gorbachev’s famous vodka ban, the “standard” drinking options included moonshine, window cleaner, cologne, insecticide, wallpaper paste, and pretty much anything else that contained alcohol or could fermented to produce it.

When it was released in the late 1990’s, Russian Standard got a boost from the fact that it highlighted “Russian,” rather than “Soviet” culture. Since then, the company has tried to tie itself to Dmitri Mendeleev, the guy who came up with the periodic table of the elements (and, in 1894, a recipe for vodka). This is more or less ridiculous, but the fact remains that Russian Standard’s cool label and Cyrillic lettering make it a good (if standard) contribution to any vodka-based festivities.

Flavor: Charcoal-filtered, it has a creamy mouthfeel and a VERY slightly spicy flavor. 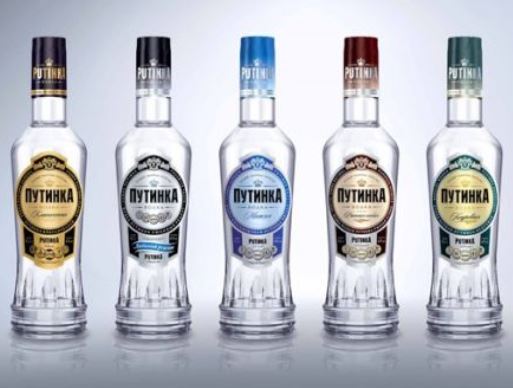 Putinka vodka – yes, it’s named after Vladimir Putin – is a smooth spirit that’s one of the best deals on the market.

The Totalitarian: Putinka
If you want your vodka to make a statement, it’s hard to beat Putinka. Named after Vladimir Putin, it is one of Russia’s most popular brands. In the rest of the world, on the other hand, it’s a lesser-known, low-priced tipple that has the distinction of being one of the few – possibly only – widely-available liquors to be named after a land-grabbing dictator (Medvedeff, named after Putin’s successor, Dmitri Medvedev, didn’t make much of a splash outside of Russia. Or, really, in it).

In terms of party cachet, Putinka is sure to fascinate and/or repel any Ukrainians, Chechnyans, Georgians, Poles or pretty much anyone who reads a newspaper.

Flavor: It is said that, if you drink five shots of Putinka really, really fast, you can hear the sounds of tanks entering the Crimea. Right before your head hits the floor. I’m not sure that’s true, but one thing is certain: this is a very, very smooth vodka. And, at about $16 per bottle, it’s one of the best deals on the market.

The Cool Bottle: Russian Royal
There are a lot of mid and lower-range Russian vodkas that taste pretty good. But, while Russian Imperia, Russian Ice and Hammer and Sickle (to name three) are solid, workable mixers, they aren’t really going to turn anyone’s world upside down.

The same is largely true of Russian Royal, a very decent mixer and sipper that is priced at about $17 per bottle. On the other hand, it is often bottled in a fun, fake cut-glass carafe, pasted with a simple, silver-and-blue label. The packaging screams “instant kitsch,” and is pretty sure to get you a few smiles. If nothing else, you’ll probably be the only person toting it to the party.

The Cool New Kid: Zyr
Over the years, there’s been a lot of talk about how Russian vodka is more or less over, eclipsed by superior Western brands, many of which are often made by people whose families left Russia because of wars, pogroms, or, you know, Communism. Zyr vodka is something of a new hope for Russia. It’s made near Moscow by David Katz, an American who was born in New Jersey, but whose great-grandfather came from – you guessed it – Russia. Made of rye and wheat, it’s distilled five times, filtered nine times and taste tested three times, which gives it a consistent and exceptionally smooth flavor.

Flavor: Zyr is outstanding. Smooth, slightly astringent, it goes well with pretty much everything and is a very nice sipper. On the other hand, it’s $30 per bottle, which makes it – by far – the most expensive option on this list. 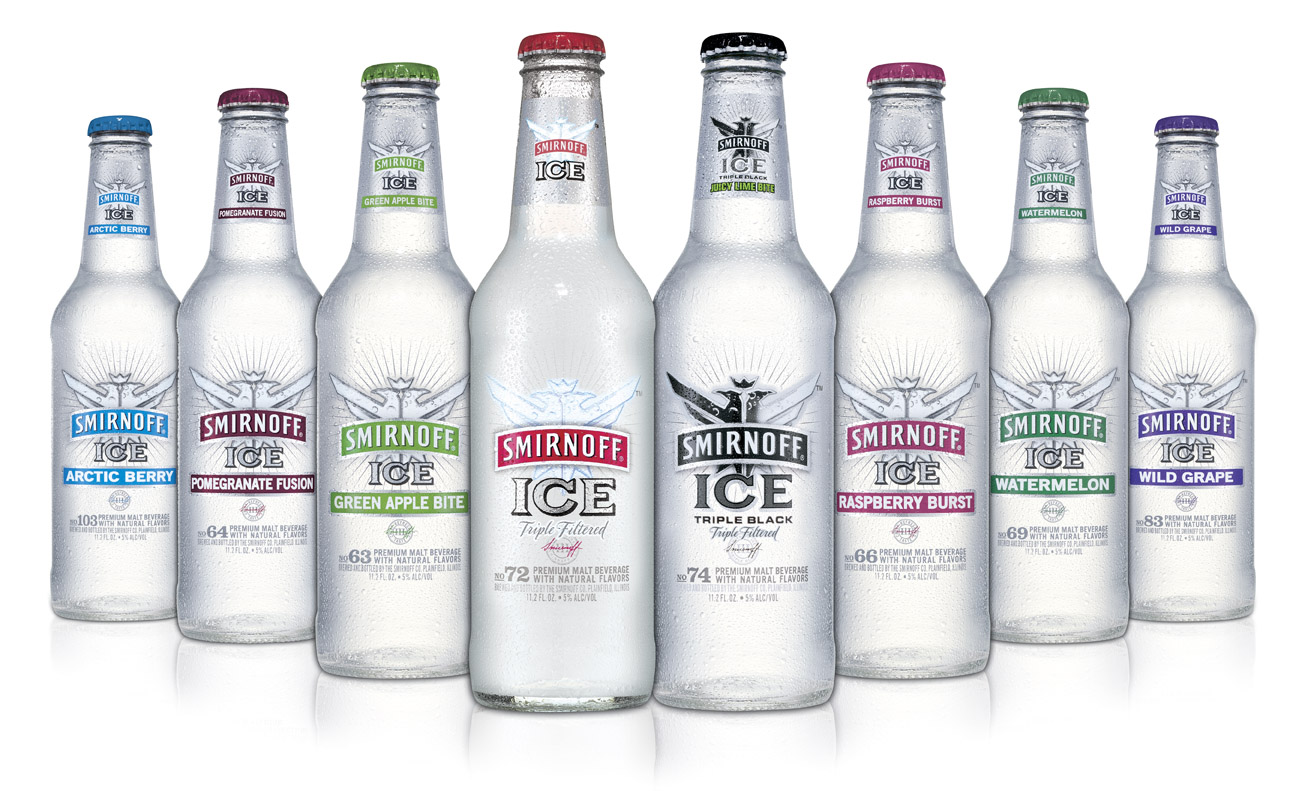 Though it may have an impressive history, Smirnoff has slowly debased its brand. Point-in-case: Smirnoff Ice.

The Expat: Smirnoff
Of all the vodkas reviewed for this article, Smirnoff has, by far, the most impressive history. Originally founded in the 1860s, it once controlled two-thirds of Russia’s vodka market. When the Tsar nationalized the industry in 1904, the Smirnovs sold their factory; later, after the revolution, they left the country, setting up shop in Europe and, eventually, in the US.

For decades, Smirnoff was one of the top vodka brands, even drawing the attention of James Bond, who used it in his famous “shaken, not stirred” vodka martinis. Unfortunately, between over-licensing its name (Smirnoff Ice, anyone?), and lowering its quality, Smirnoff has done pretty much everything in its power to debase the brand. If you bring Smirnoff to a friend’s house, keep the bottle in a bag until about two hours after the party begins. Then, once everyone’s tastebuds are suitably anesthetized, start subbing it in for more premium brands.

Taste: At its best, Smirnoff is bland. Unfortunately, however, the company sometimes uses plastic bottles, which lend a decidedly chemical overtone, suggesting hints of nail polish remover and industrial solvent.