Welcome to the 5th and final day of Around The World In 5 Editors. We’ve delved into the food and drink of Japan, Israel, India, Germany, and now… Russia!

Sam Schatz can certainly be described as a jack-of-all-trades. The Director of Business Development at clean-tech company AeroFarms spent two years in Moscow working to bring American and European technologies to the Republic of Tatarstan. While in Russia’s capital, Schatz also wrote for expat publication Element Magazine, covering the city’s bustling food and nightlife scene. With very little idea about the notoriously secret country’s culinary highlights, we sat down with the ex-food critic to talk all things Russian food. Turns out we shouldn’t really be complaining too much about that $5.50 vanilla latte in the States.

When someone says “Russian food,” what comes to mind?
Most of the things that come to mind are actually not really Russian dishes, but from the various republics. Borscht and chicken Kiev are both Ukrainian. The incredibly caloric hatchipuri is Georgian, and dishes such as lag’mon and shaslik/kebab are Uzbekistani. Russian food is really an amalgamation of the foods from all of these places.

Pelmeni and smetana are two very Russian things: the latter is basically sour cream with a slightly lighter consistency and the former are essentially cheap dumplings usually purchased frozen and boiled. Different types of pierogi – stuffed with potatoes, liver, meats and vegetables – are also quite common and delicious, with many places serving them fresh. Smoked fish and fresh mushrooms are quite common, as is traditional black Russian bread. Chocolate is insanely popular and any retail shelf will have dozens of varieties, mostly Russian-made. Tatar desserts like chak chak are very popular and medovik (a Russian honey cake) is also excellent.

Siberian food isn’t widely eaten in places like Moscow, but is definitely considered Russian food as well: reindeer, frozen fish and a wide variety of mushrooms as well as different flavored vodkas.

The notion that Russians drink vodka all of the time isn’t entirely true. It’s consumed quite frequently on certain occasions, but vodka and alcohol in general is less widely consumed than most people think. It’s very rarely ordered when going out to eat and is mostly something consumed at home.

Did you write bad reviews? Were you fearful to do so?
I’d like to say I wrote fair reviews. I was critical of a few places and poked fun at others. In the back of my mind, I was always careful to not write anything too scathing. The Moscow restaurant community is very intertwined with the business community and I didn’t want to rub anyone the wrong way, especially given that my job was working for a foreign investment fund. Moscow’s White Rabbit restaurant is known as one of the city’s swankiest. The panoramic view cannot be beat.

What types of restaurants are most popular in Moscow?
Most popular are Ginza Project restaurants, which basically offer diners spacious settings of tables with couches and plenty of room to be seen and to see others. They have various themes to differentiate them but generally speaking, the menus are the same. There are some exceptions such as Ragout, which changes its menu frequently, Bontempi and a great Russian cuisine spot called Mari Vanna. A lot of these places double as clubs at night. Most places serve steak, which costs more than $50 for a decent cut.

What cuisines are popular in Moscow? Are there any trends you noticed?
On pretty much any menu in a Moscow restaurant you will find a few key dishes like beef stroganoff, different types of crepes, soups and chicken Kiev.

Italian food in Russia centers around cream sauces and dishes with lots of cheese. Pizza is very popular and is served pretty much at every restaurant in Russia. Risotto is a craze right now and is usually on the menu.

Sushi is almost always on the menu at all Moscow restaurants as well and is usually pretty decent. Rolls on offer are the standard sushi/sashimi and some fancy mayonnaise-intensive rolls. Cream cheese is extremely popular and most of the “fancy rolls” have the stuff in it, though Russians comically refer to it as “Филаделфия” or Philadelphia – there’s no other word for cream cheese as I can recall.

Burgers are also insanely popular, with restaurants going through intensive R&D to develop the perfect concoction.

What is the drinking culture like?
Vodka is stigmatized in Russia and it is not considered classy by most, even when it comes to the higher-end stuff. Most Russians prefer whiskey, though tequila is making a big move at the moment. Good rum can be found in a few places but is less common. There are a few speakeasy-style cocktail places opening up that are very popular in Moscow, though generally Russians’ exposure to higher-end cocktails is limited to bad Mojitos and Jack and colas. 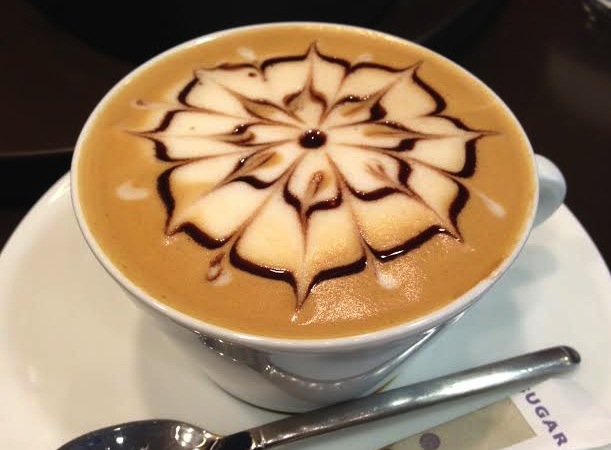 A mocha at coffee hot spot Кофемания may look – and taste – delicious, but a large size can cost up to $30.

Is there a coffee scene?
I would say the coffee selection in Russia is quite good. The milk products are amazing, which is really a big part of coffee drinks these days. I think I paid something like $30 for my first cup of coffee, a mocha. Nespresso is making a big push in Moscow and there are definitely coffee places, like Кофе Хайс, which is in almost all Russian cities and very popular. There is a place called Кофемания (“Coffee Mania”), which is crazy, but the coffee is terrific.

People are also obsessed with Starbucks in Moscow, even more so than here. This is likely because it’s much more of a status symbol. It was the same thing with McDonald’s in Russia years ago, though that’s mostly changed.

When you returned to the United States, what was the first thing you ate?
I went to Wok 88 on the Upper East Side and got myself some good old-fashioned Jewish Chinese food. There are surprisingly very few Chinese restaurants that can be found in Russia and even fewer Korean places.

See what is going on during Around The World In 5 Editors Week on Food Republic: