To fully understand a cultural celebration, one must be acquainted with the day’s history, customs and food. Yes, of course, food. Traditional dishes play a vital role in properly commemorating religious festivals in various cultures. With Greek Orthodox Easter set for this Sunday, we chatted with chef Charles Bowman of Periyali, the Flatiron restaurant that essentially invented fine Greek dining in New York City when it opened in 1987. Who was the chef way back then, you ask? Why, Charles Bowman, of course.

With the experience of having professionally cooked over two dozen Greek Easter feasts under his belt, Bowman educated us on the day’s historical customs. Like the fact that the holiday occurs on the Sunday that follows the first full moon after the vernal equinox, and is based on the Julian calendar instead of the Gregorian calendar. But we were primarily concerned with the day’s culinary traditions, on which the chef was happy to expand.

OK, explain Orthodox Easter.
Orthodox Easter, known as “Pascha” in Greek, is the most important event in the church calendar and commemorates the resurrection of Jesus. Preparations begin with 40 days of strict fasting prior to Easter Day. During holy week just before Easter, families attend church every evening; service institutes the sanctity of the whole calendar year of the church and centers around Easter. 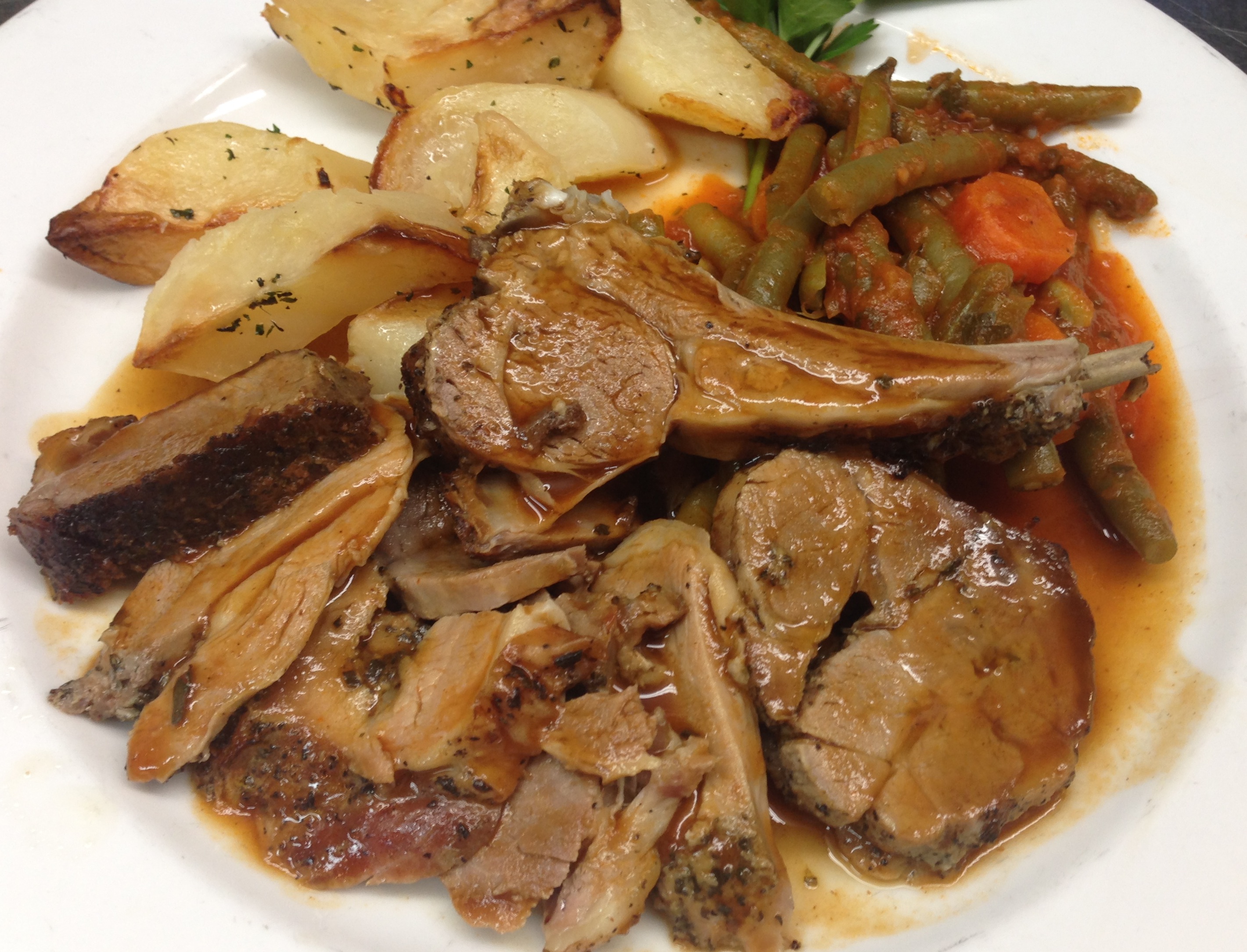 Traditionally, roasted lamb is served alongside lemon potatoes and vegetables on Greek Easter.

What are some of the Greek culinary traditions on Orthodox Easter?
Magiritsa soup: The concept behind making this soup is to use all the leftovers from the lamb you are going to cook on Sunday (liver, heart, lungs and other organs). The soup is used to break the fast after midnight on Saturday.

Red eggs: Eggs are dyed red to represent the color of life and the blood of Christ. The egg is a symbol of the renewal of life and its victory over death.

Tsoureki (sweetbread): It is shaped into a twisted wreath/braid and has red-colored hard-boiled eggs tucked into pockets formed between the twists. And, of course, roasted lamb.

What about drinking traditions?
Plenty of Greek wine and ouzo.

What are other Greek traditions on this day?
There is a late church service Saturday night, where people gather to celebrate the rebirth of Christ. After midnight, the Priest calls out, “Christos Anesti” (Christ has risen), and friends, family and neighbors exchange the same words and, in response, “Alithos Anesti” (truly, He is risen) or “Alithinos o Kyrios” (true is the Lord).

Special candles made for Easter called “labatha” (given as gifts to children from their Godparents) are lit using the “eternal flame” from the church. People make their way to their homes and carry the candles to make the sign of the cross on the doorframe in smoke for blessing. The sight of hundreds of candle flames moving from churches to homes all around Greece is a splendid sight. The candles are then put on the table for the midnight meal, where the 40-day fast is broken.

What about the red egg game?
The festivities begin with the traditional game “tsougrisma,” where each person holds a red egg and taps it against the end of an opponent’s egg, trying to crack it. People eat tsoureki and the magiritsa soup. The night is followed by lots of dancing and celebrating. At dawn on Easter Sunday, the grills are fired up to prepare for lamb or goat roasting.

What are common misconceptions about Greek food?
Greek food isn’t only about meat! The cuisine has a very large vegetarian selection, ranging from dolmadakia (stuffed grape leaves) to gemista (stuffed tomatoes and peppers) to bamies (okra) to horta (dandelion greens).

You were Chef when Periyali first opened around 25 years ago. How has the city’s Greek dining scene evolved since then?
A lot has changed since then. We’ve seen an uptick of Greek restaurants in the city. As Bryan Miller said in 1993, “Instead of a trattoria on every corner, why don’t we see fine Greek restaurants like Periyali, or German, Spanish, Portuguese, Brazilian and Eastern European establishments?”